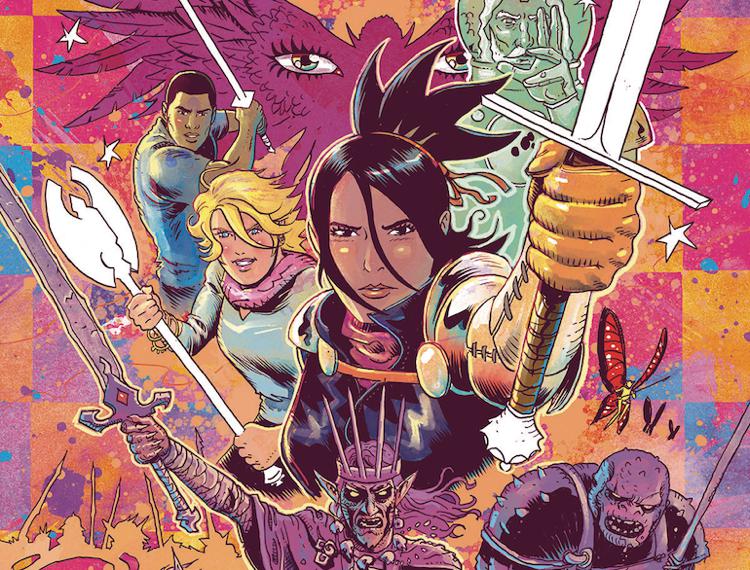 When Rani Arturus travelled to England with her parents, she thought she would be there to win a chess competition. Instead, she finds herself entangled in a great Arthurian tale, chosen to become the leader of her world by a magical sword! I talked to Adam P. Knave and D.J. Kirkbride about their fantastic series, 2018 Dwayne McDuffie Award for Diversity in Comics finalist The Once and Future Queen! 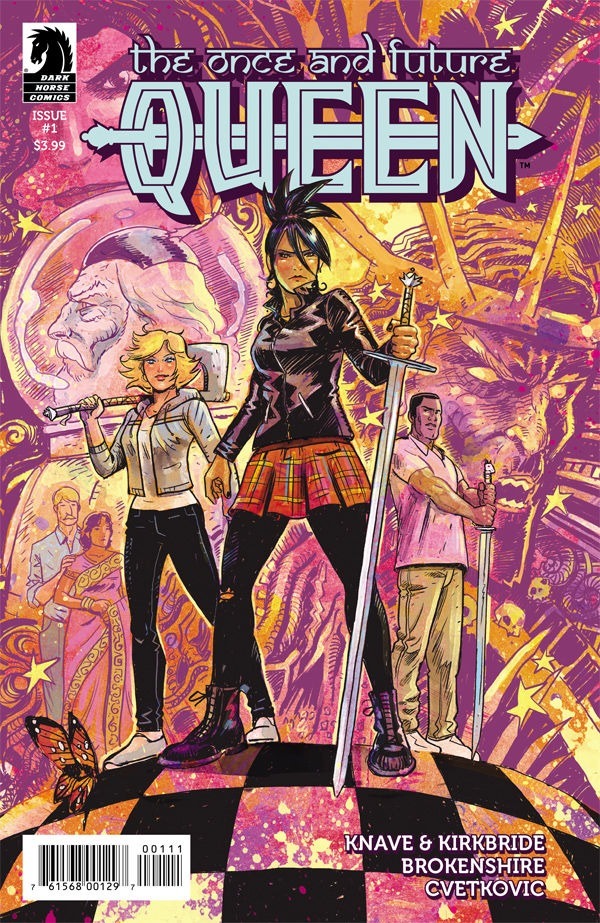 Mexi Gremillion: I just wanted to say that I love your ace representation in the book with Lance. As an ace person myself, I really loved how you discussed his asexuality and how you treated him as a character.

Adam P. Knave: Thanks. We both have a lot of ace friends, and in general representation is critically important for everyone. And the ace community doesn’t see a lot of itself in fiction these days, so when it looked natural for the character we leapt at the idea.

D.J. Kirkbride: I learned a lot writing the character with Adam. He did research, we talked to mutual friends, and the whole team has been happy with reader response to the character. He’s a lot of fun to write, and we have more plans… it’d be a lot of fun to follow Lance on more of these adventures!

MG: Once and Future Queen is a take on the King Arthur story with a twist. What inspired you both to create this? Why King Arthur?

DJK: Almost everyone is familiar with Arthurian Legend to some degree. It’s a story that has permeated our consciousness and inspired many other stories and characters, from the obvious adaptations to even Star Trek, especially the original series. As Adam and I were trying to come up with a follow-up to Amelia Cole that we could create with artists extraordinaire Nick Brokenshire, we thought it might be good to have something familiar as a starting point. Nick and Adam are both very well versed in King Arthur’s adventures, while I know movies like Excalibur and The Sword in the Stone, have read that section of T.H. White’s The Once and Future King, as well being familiar with the basics of the legends from just being a fan of adventure and tails of derring-do, so it seemed like something we could all contribute our own unique takes to, learn and forget and change and create our own interpretation.

APK: As D.J. says, I love Arthurian Legend. While we were on one of our big creative exploratory calls that we do, we were tossing out ideas and adding and subtracting bits here and there and at some point it just felt right to turn the corner to Arthur with the characters we had started to dig out. 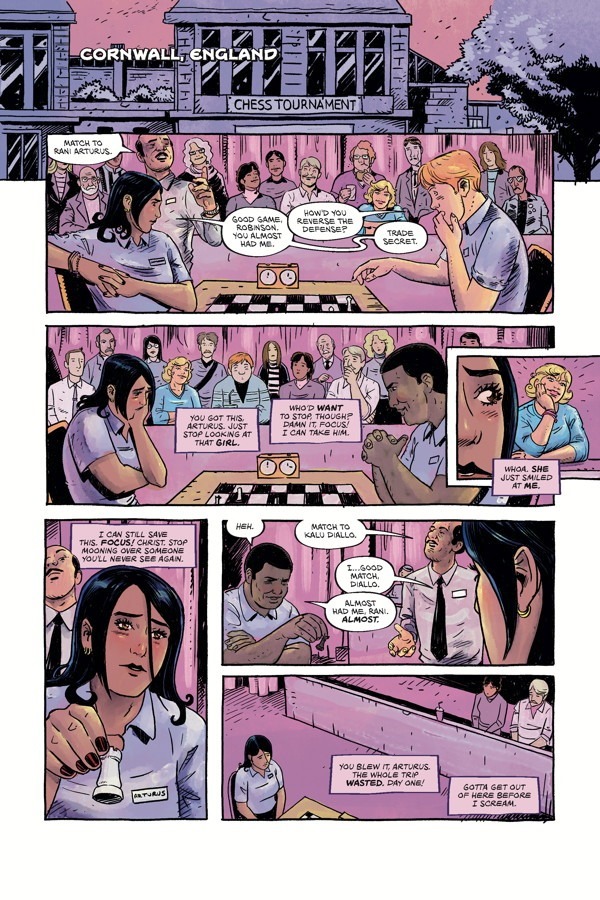 MG: In the story, the main character, 19-year-old Rani Arturus, competes in chess tournaments on an international level. Why did you choose chess for the hobby?

APK: We wanted her to be a strategist. To show that she brought something to the table before being picked by fate. This was our way of signaling that she had a mind that worked a few steps ahead and could be a leader worth following.

DJK: It also resulted in fun visual motifs, from the designs of Rani, Gwen, and Lance’s weapons to Nick’s covers and Dark Horse’s trade design. It’s also fun to note that we only have our Queen, King, and Knight. There are more pieces to meet!

MG: I think my favorite scenes are those in the Fae realm. There’s an echo of the darkest timeline there, something that feels possible in our world if we went down the wrong path. It’s fascinating. What was your favorite scene to write in the volume?

DJK: When we were working on the pitch, Adam wanted first crack that the opening Fae scene, and the voice and language style that get initiated made for a lot of fun writing as we worked on the series. I loved any scene where the King in Shadow was barking orders at his minions. Writing that dialog is fun. My favorite scene, though, is a spoiler, so I’ll just request anyone reading this interview check out the book, and we’ll talk later.

APK: Though I will say “hooman” is all D.J. As for a favorite scene to write I think for me it was the opening pages. Getting the characters from A to B with very fast cuts, but still showing a world, and dropping in commentary on our world, as well as building characters in a very short time – these are incredibly fun puzzles to solve. 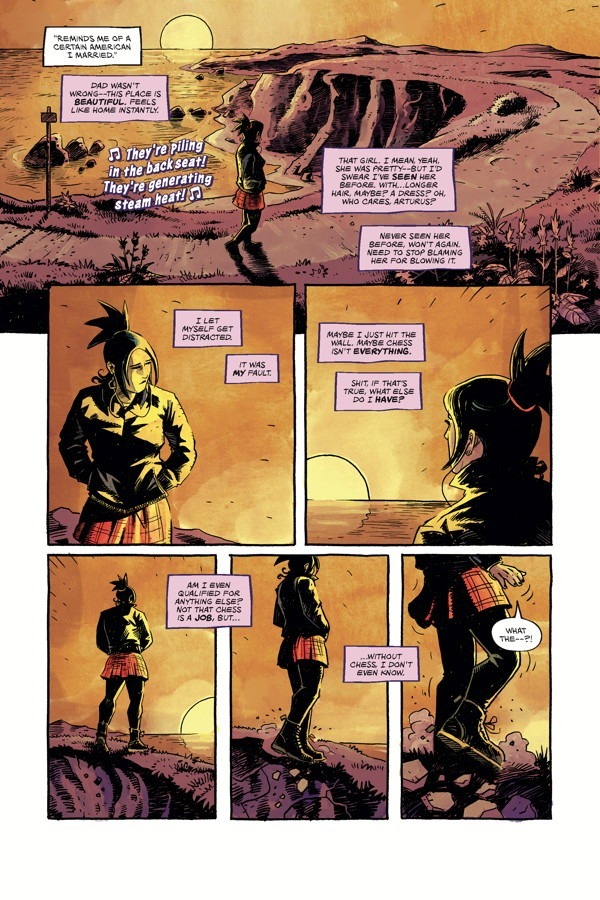 APK: For me I love writing Lance as he comes into his own in the group. He starts off so confused and ends in a place where he is taking the front of the line without thinking.

DJK: We wanted every character to be fun for the readers as well as us as the creators, not only the leads, but also their families and the mysterious Morgan Pari. It’s important our central lead to be someone we all want to follow, but Rani was maybe the most challenging to write. She’s strong and cool, but also a little harsh at times. While she’s very human, she’s more reserved than, say, our previous hero, Amelia Cole, so that took some getting used to, finding her voice. I loved writing her and Gwen and Lance, but, to be honest, every time we had Merlin show up, I had a smile on my face.

MG: I understand that Once and Future Queen was nominated for a Dwayne McDuffie award. Even if you didn’t win, that’s still a great honor. How do you feel about the nomination?

DJK: Thank you. We worked with our editor, Shantel LaRocque, regarding which awards we should submit the book to, and while they are all wonderful, the that fact that the Dwayne McDuffie Award is named in honor of an amazing, all-time favorite creator of ours and also represents something truly important made being one of the nominees truly special. I know, Adam, that it was one of, if not THE big one for you, right?

APK: It really was/is. I’ve been a fan of McDuffie since I started learning creator names of the comics I read. Then I learned more about the man and just admired him so much. So having been even nominated for an award that celebrates what McDuffie believed and how he wanted to push the world forward is just an unending source of joy and pride for me. 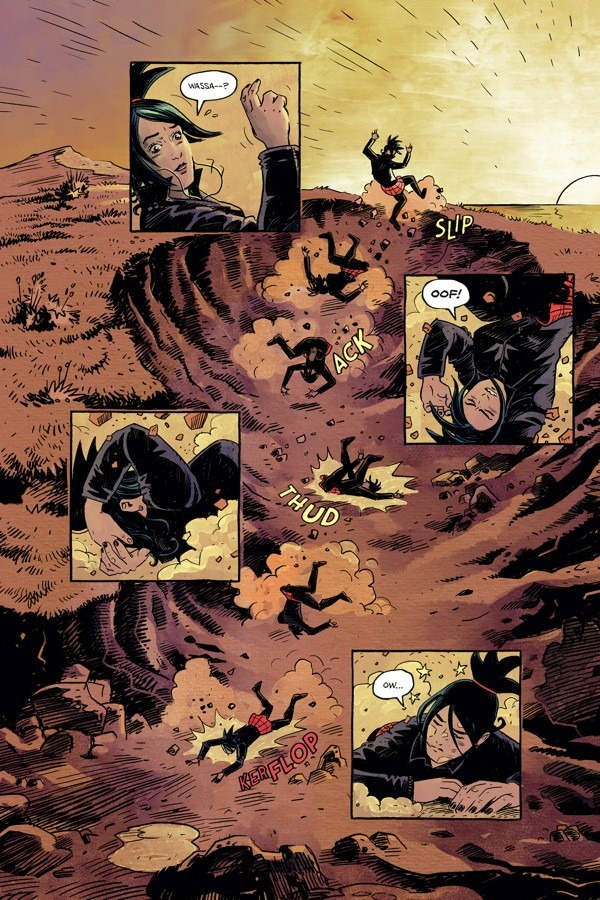 MG: The first volume of Once and Future Queen ends on several cliffhangers. Morgana is well on her way to getting herself and her army back into the “hooman” world, Gwen is injured, and the world at large knows something’s up, even if they don’t exactly know what. I know that Once and Future Queen is a mini-series, but are there any plans to continue the story? Anything you can tell us about the upcoming plot?

APK: We have three volumes total we’d like to do. We really can’t spill much of what would be coming up but I will say that there are a few big secrets yet to be revealed that change everything.

MG: Besides Once and Future Queen, are there any other projects that you’re working on that you’re excited about?

DJK: The two projects I’m currently working on aren’t ready to really be announced yet, for fear of that, “Check out my new thing!” and then it never actually comes together, or takes so long that people feel like you’re late before the first issue is even announced syndrome. One is a science fiction adventure about brothers with an amazing artist I’ve never worked with before. It’s coming along nicely but also slowly due to the demand for his talents. We’re taking our time so that when issue 1 is out, there will be no creative-team-caused delays. More on that one soon, hopefully! The other is with a creator I’ve worked with before, but this time we’re working together in a different way. It’s a horror thing just in the very beginning stages. Also, hopefully more with Adam and also, fingers crossed, the Nick!

APK: I have a new novel coming out soon, a sequel to my last pulp SF novel. Which is strange, I’ve never written a sequel before. Then I have a second novel coming out late this year, and a bunch of comic pitches in the works – it’s a busy time. But I’ll also always make time to create with D.J., Nick and Frank. That’s a no-brainer.

Once And Future Queen is available in stores, online and digitally on comiXology.