Crime is rampant in Chicago, and The Green Hornet is looking to take it down. Dynamite Entertainment will be relaunching their Green Hornet ongoing under the guidance of veteran writer Mark Waid on March 27, 2013, taking the book down a different road than we’ve ever seen before. Waid was kind enough to discuss what readers can expect from the tone of the book, the role of Kato, and who the Green Hornet will be up against. 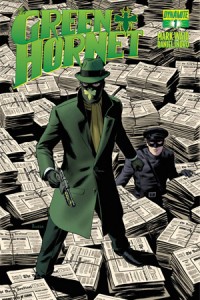 Aaron Long: This March you will be relaunching the Green Hornet series with a new #1. Can you discuss how you became part of the relaunch and what drew you to the series?

Mark Waid: Nick and I have been wanting to work together for years now, but the stars didn’t really align until a few months ago when I spontaenously pitched my take on GREEN HORNET, based on the kernel of an idea I’d had ten years ago during a cross-country drive when I was helping a screenwriter friend of mine come up with his pitch for a movie. Honestly, I’d forgotten my take on the character until I pitched it to Nicky, and he bought it on the spot.

AL: The Green Hornet has been written by many over the years, with several different takes on the character. Will this Green Hornet be closer to the tone of the film, or a more noir/pulp focus? What is your take on Britt Reid?

MW: Tonally, it’s far more pulp. More importantly, it’s NOT a superhero book–it’s a CRIME book. Everyone in Chicago assumes that the Hornet is a master super-villain, and he plays that to the hilt, using his “in” with the underworld to learn sensitive, incriminating information that he can then (as newspaper publisher Britt Reid) make public. Reid’s very much enjoying the use of his paper as a bully pulpit to take down corruption–but he may be enjoying that power a little too much.

AL: With any discussion of the Green Hornet comes questions about Kato. Will Kato be returning to the simple role of valet, or continuing to be a more active participant in Green Hornet’s activities?

MW: He poses as Hornet’s valet, but he’s a partner. And, when need be, a conscience. One of the things we’re adding to the Hornet mythos is that Kato does a lot of behind-the-scenes work to help Hornet stage the fake criminal acts that he uses to reinforce his reputation among the underworld as a bad-ass.

AL: Can you discuss what the Green Hornet will be up against in the first arc of your run?

AL: If you had to boil your Green Hornet relaunch down to 6 words, what would they be?