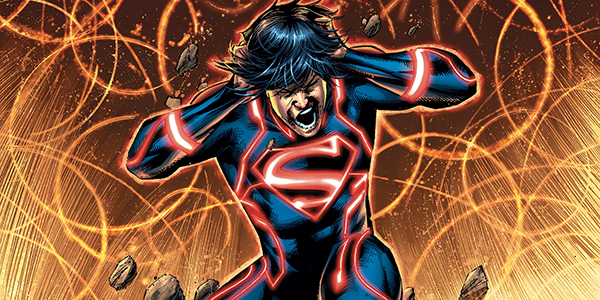 Marv Wolfman is a legend in the halls of DC Comics for writing sixteen years of the company’s premier teenagers, the New Teen Titans. So what better writer to come aboard and scribe the ongoing adventures of Superboy? The only catch? This isn’t your father’s Superboy. Reportedly meeting his end this month in the pages of Superman, Kon-El is being replaced by the very boy he was cloned from — Jon Lane Kent, the future son of Superman and Lois Lane. Already making appearances in the pages of — syncronicity! — Teen Titans, Jon is not exactly the truest hero of them all, but more likely a villain in disguise. Wolfman graciously agreed to share some of his thoughts on the new Boy of Steel and just what we can expect as the next few months pass in the pages of Superboy! 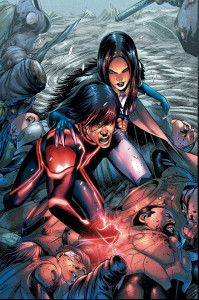 Matt Santori: Thanks for taking the time out, Marv, and congrats on the new title at DC! You’ve famously written a ton of teen characters for DC over the years, but rarely had the chance to tackle one with an ’S’ on their chest. What drew you to Superboy and how do you think he compares to Teen Titans you’ve crafted previously?

Marv Wolfman: I wish I could say it was some grand design on my part, but it never is. I was asked by Dan DiDio if I’d be interested. I wasn’t sure until he told me this version of Superboy was Jon Lane Kent, not Kon-El. Jon’s a killer. He’s murdered hundreds of meta-heroes. He’s psychotic. He’s not the good guy by any stretch of the imagination. And that was what drew me to him. This was a chance to tread in new waters. There have been very few series that have dealt with the villain as we’re planning to. Also, I loved playing against the moral ground when I wrote Tomb of Dracula many years ago, and this was a chance for me to explore it even deeper.

As for the Titans. There’s no similarity. I created Deathstroke and he was morally ambiguous, but Jon pushes those barriers even further.

MSG: Your upcoming run on Superboy of course features a different version of the hero many fans have come to love over the past twenty years. Is there a sense of adventure to introducing a brand new iteration of a classic hero and what steps as a writer do you take to lay the foundation for your run?

MW: With villains you always have to understand what motivates them. Most people don’t just think they’re evil. They believe or know they are doing the right thing because of the circumstances they find themselves in. Or they are overwhelmed by circumstances and can’t stop what they’ll do next.  For me, the point of drama comes from the difference in what Jon sees as right and wrong (and for him killing metas made sense since they were becoming cruel dictators who couldn’t be stopped any other way). 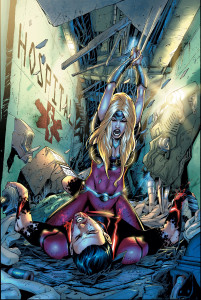 MSG: As the son of Superman and Lois Lane from the future, Jon Lane Kent is in the auspicious position to meet his father in the present day, not to mention his father’s girlfriend — Wonder Woman. How will Jon negotiate the present as a visitor and can we look forward to his presence having repercussions across the DC Universe?

MW: I hope we can have him meet with Superman and Wonder Woman. But remember, he’s from a few years in the future; Superman wouldn’t know he’s his son. Also, at this point nobody knows Jon is Jon. They think he’s Kon-El, a hero. And again, that foreknowledge on Jon’s part will lead to drama. If I’m allowed to, I can see Jon having a major effect on the DCU. But that is up to much more than just me.

MSG: All appearances so far seem to indicate that Jon is not the most heroic of figures, which is a sharp contrast to Superboys of the past, but fits in with recent iterations of darker, villainous Supermen in Earth 2 and Injustice: Gods Among Us. What is it about the Son of Superman that makes him such a rich character to start off as a villain?

MW: As I mentioned above, Jon comes from the right place; meta heroes became ruthless dictators. They needed to be stopped. He was taught by Harvest to destroy these super beings. But the stuff of heroes does not allow his sort of mindless mass murder. So where does he go from here? And that is why he is interesting to me. 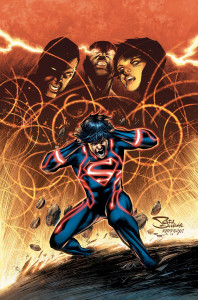 MSG: Solicits for February’s Superboy #29 show Jon coming back from the future with a trio of teenagers in tow. What can you tell us about Superboy’s place with the Teen Titans, as well as these new heroes — and could these heroes bear any resemblance to another trio from the future befriended by Jon’s father so long ago?

MSG: Any plans for a new or expanded supporting cast for Jon and what kind of opponents will we be seeing pop up in your early issues?

MW: I’m already introducing a large cast and will continue to do so. Jon’s mission forces him into lots of interactions. And once we’re back in the present new opponents will be created. But Jon’s journey means many of those people might not survive long enough to affect him.

MSG: Any special teases or last thoughts to share with the Comicosity audience?

MW: My first issue, #26, was originally written by another writer. When we decided to go in a different direction, I had to use a lot of the already finished art in my story while changing much of its original intent in dialog. Ultimately I think we used between 6 & 8 pages from that story. I added some new pages up front, used those original pages in a different way, then scripted the new end. So #26 was a puzzle to put together, for me, but I don’t think anyone reading it should spot that as it already introduces some of the new ideas.

#27 was done in conjunction with Scott Lobdell, who has been absolutely great in helping me. After all, I was brought into the middle of a long story which he had conceived that crossed over with the Titans. I look at #29 as my true starting point and I’m laying the grounds for what I feel is my real first issue where I make a difference, and that’s with Superboy back in the present. I hope readers will give me a chance to go past what had been so I can introduce all the new ideas.