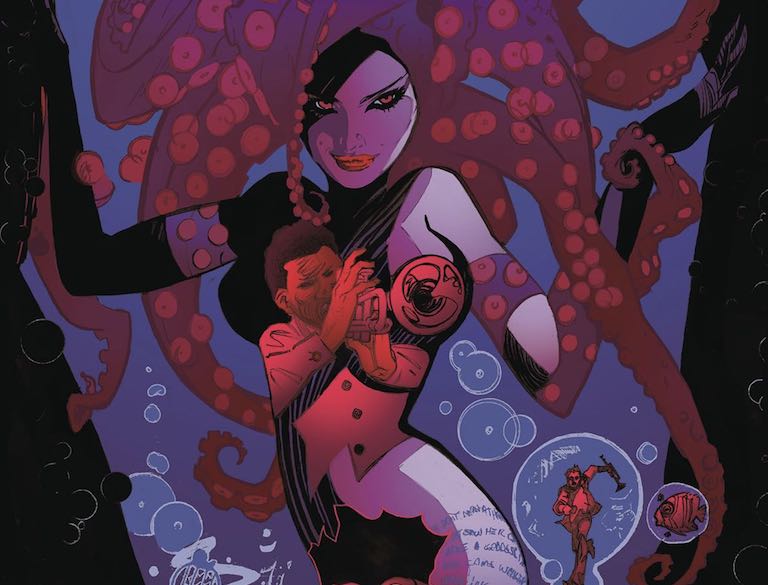 Have you ever experienced music so soul touching that it transported you to another time, place, or dimension? In JC Lacek’s new series Jazz Legend we join a jazz musician that gets sucked into the spiritual world of the music that he creates. This story is a fascinating look at the jazz culture night life and adds a layer of the supernatural to it. Lacek took the time to talk about the influences that shaped this exciting new story. 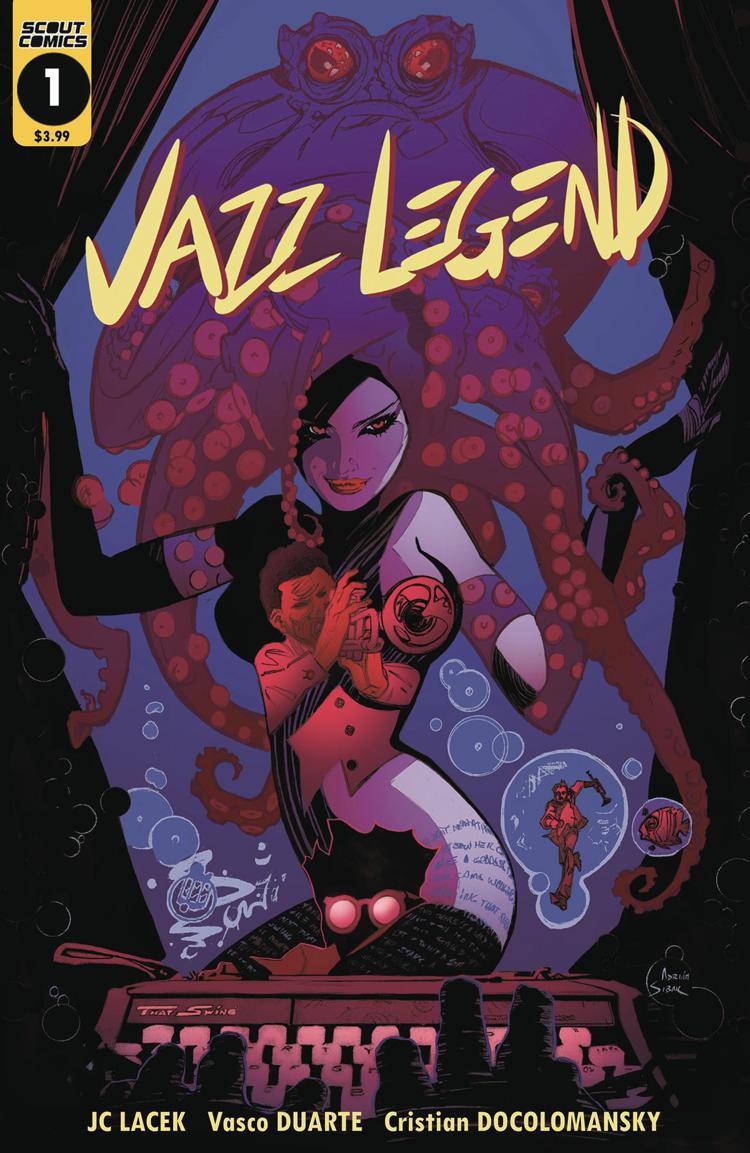 Chris Campbell: What influenced you to come up with this story? Are you a jazz lover?

JC Lacek: I do listen to quite a bit of jazz. I’d say half of the music I listen to in a day is jazz or jazz influenced and it only seems to increase as I get older. I would say, though, that the influence for Jazz Legend is more about the people who live the ethos of jazz as an idea.  I’ve always had a fascination with the avant garde / fusion jazz scene and the beat literature writers of the mid 20th century. These artists were true mavericks of their art in ways the world just hadn’t seen before. There was a fearlessness present in what they developed that had zero interest in pandering to the mainstream music and literature consumer. This lead to a lot of experimentation. The average Joe was suddenly walking into a night club, turning on a radio or picking up a book, and suddenly having their minds blown wide open experiencing this brand-new world. In my opinion that’s what jazz is truly about. It’s loose, it bucks convention and it can go places no other music form can. With Jazz Legend, I wanted to convey the essence of the idea of jazz more so than having it be about music itself.  The same way that jazz music can take the listener on a journey of soundscapes without rules and endless possibilities, I wanted to use the idea of jazz to take my characters to unexpected worlds in a very real physical sense.

CC: Is the main character, Martin, based off of anybody in particular?

JL: Not any one person, no. Martin to me is more of a place holder who embodies jazz greats like Charlie Parker, Miles Davis or Stan Getz, for example. These were monolithic figures in jazz, true jazz legends, but were also of the extremely hard living variety. This archetype has been a mainstay in the noir genre since there was noir. It was important to me not to mess with that format because Jazz legend was never in my mind about reinventing the wheel, it was about taking the wheel to new places. Some critics who have reviewed issue #1 have made mention about my portrayal of the Afro-centric elements of the book as being less than positive, siting Martin’s lack of respect for women and his use of drugs, alcohol, and at times, violence. The thing is, although Martin is one of the two lead protagonists in the story that doesn’t by default make him a good person. Martin is a jazz man first and foremost.  His lifestyle is modeled after the lives of particular jazz greats from history who were also not the most responsible people. To suddenly create a character set in this place and time from the jazz era and make him Black Panther would have been a disservice to the historical truth in my opinion.

CC: You are also a playwright as well? How is writing for comics similar to writing for a stage production?

JL: Dialogue-wise it can be very similar at times. As far as the story structure goes it’s at the opposite end of the scripted entertainment spectrum. Comics by their nature can turn on a dime and become anything and go anywhere with the flip of a page. Theatre on the other hand, no matter how you slice it, has huge limitations by the simple fact of being tethered to the stage and having a finite cast. I love writing both, don’t get me wrong. Opening a freshly printed comic in my hands is one of the reasons I do this, but seeing a big stage production come together and seeing my characters come to life, I’ll just say I don’t know if there’s a feeling that compares.

CC: The neo-noir mood of the story is so rich and good. Why choose this as a setting and did you visit jazz clubs to capture the atmosphere?

JL: You can’t have jazz players without the clubs. Especially from this particular era depicted in the book. Jazz clubs and the musicians who played them created a total sensory experience that birthed an idea that is still very much used in the global lexicon, cool. It was a necessary part of the equation for me. 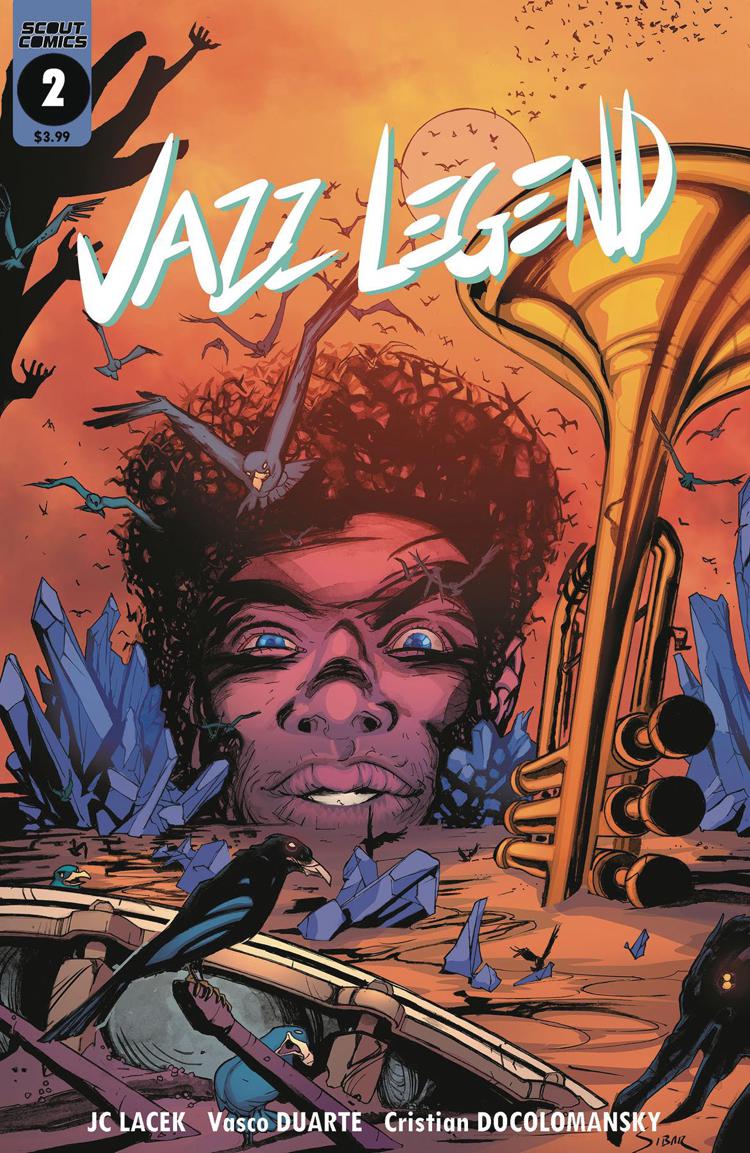 CC: What can you share with us about the world that Martin ends up in towards the end of the first issue?

JL: For the sake of not unloading any spoilers, I can use this quote from my publisher.  If Miles Davis had been the one to fall down the rabbit hole in Alice in Wonderland, you would have had something closely resembling the bizarre and turbulent world of Jazz Legend

CC: What are the designs of the creatures that inhabit that world based on?

JL: For lack of a better word I’d say a mix of Lovecraftian horror and some Alice in Wonderland mixed with a dash of cosmic fantasy. I’m a fan of older storytelling and modern more sci-fi elements so I wanted to strike a happy medium.

CC: What can we expect for Martin to go through in the coming issues?

JL: Ha… he’s going to have a rough go of it. As I mentioned, his lifestyle isn’t exactly on a trajectory for roses and Sunday morning walks on the beach. The guy’s life is hard enough as it is. I’m not so sure sudden drug psychosis and the appearance of abominations and monstrosities will really do him any favors.

CC: What do you hope that readers take away from your writing?

JL: This story style isn’t the usual gift-wrapped package that many standard comic format readers are going to be used to. There are many loose ends at the start all going different directions. This is a part of the Jazz Legend experience. It will get even wilder in the coming issues, but if you stick with it, just like a good jazz improv, there will be that point where everything suddenly clicks and what seemed like noise unexpectedly becomes music.

Look for Jazz Legend to release in May 2018 from Scout Comics.