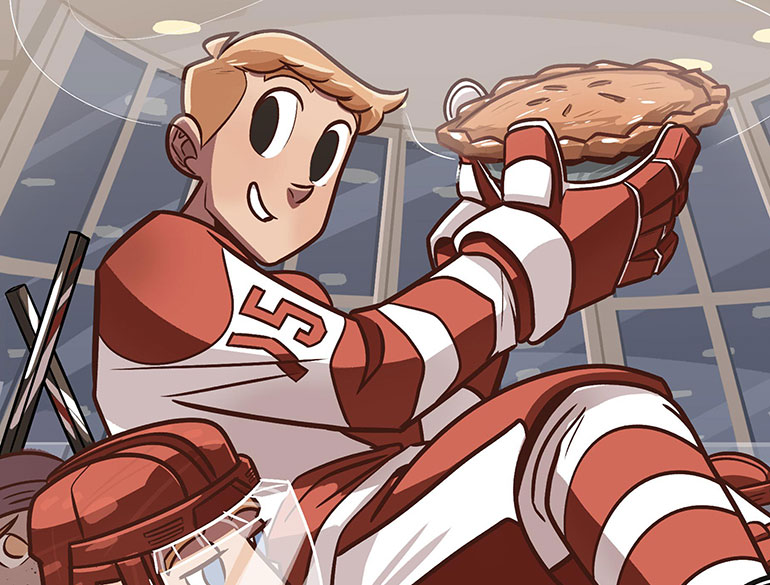 If you’re a fan of web comics about good hockey boys, baking, friendship, or any joyous combination of the 3, chances are your are also a fan of Ngozi Ukazu’s hit webcomic Check, Please! Having garnered a huge online following and two massively successful Kickstarter campaigns to bring Check, Please! to print, Ukazu has signed a deal with First Second Books to publish both volumes of the webcomic.

Taking time from her busy schedule, Ukazu has been kind enough to talk with us about Check, Please! and the future. 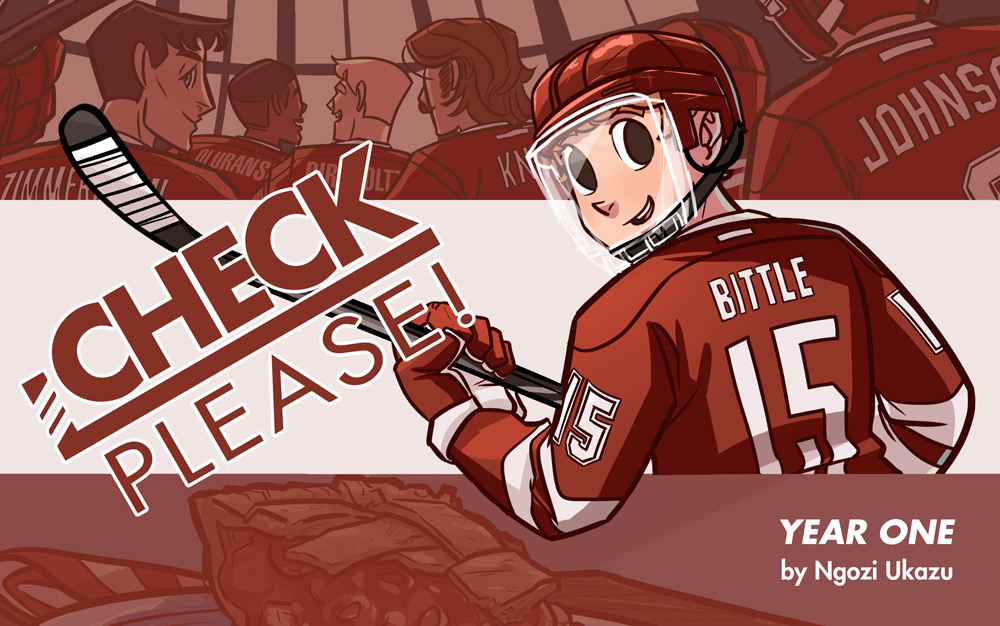 Kelly Richards: Congratulations on your deal with First Second Books. For any of our readers who aren’t familiar, could you tell us a little bit about Check, Please!?

Check, Please! is the story of Eric “Bitty” Bittle, a figure skater from Georgia who starts his freshman year on the Samwell University men’s ice hockey team in Massachusetts. Bitty is short, gay, southern, and a baker — and deathly afraid of being “checked” which is when you get hit out on the ice.

It’s a story about college and hockey and frat parties and bros and lots and lots of stress baking! It’s also about a boy who learns to accept who he is while finding love along the way. 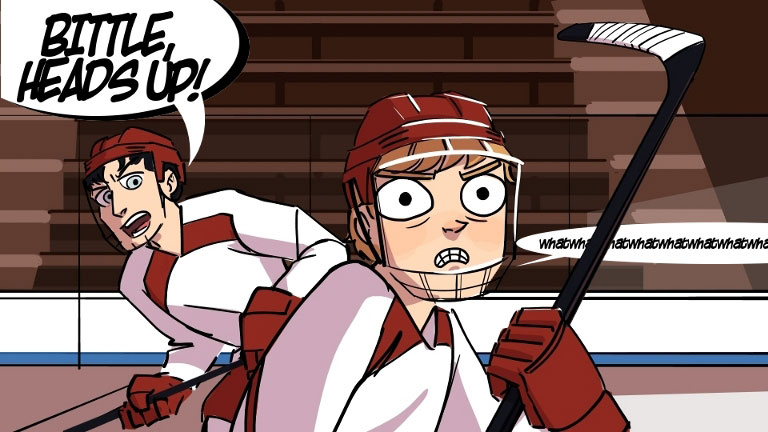 KR: What is it they drew you toward telling a story with hockey as a backdrop? Are you a big hockey fan? I pretend I am, but really its just for Samwell.

NU: During my senior year at Yale I took s screenwriting seminar where I wrote Hard the story of a tough-guy hockey player with a lot of internalized homophobia. Being from Texas, hockey was never really a big part of my life growing up, so I had to throw myself into research.

After watching documentaries, interviewing hockey players, checking out books on hockey culture from the library and playing some intramural hockey myself, I churned out a completed screenplay in a semester. Another unexpected byproduct of my research was that I became a massive hockey fan. (Yale won the Division I NCAA hockey championship that year too! It was destiny!)

When I started sequential arts graduate school, I still had all this ice hockey fervor and was interested in creating a webcomic. I enjoyed the topic of my screenplay, but wanted to work with lighter subject matter while still focusing on the exotic nature of the sport. So I started Check, Please! 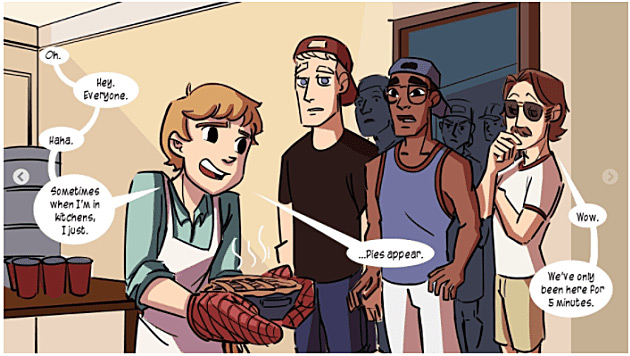 KR: With Check, Please you’ve created a really nuanced and almost subversive portrayal of masculinity and male relationships. Was this a conscious decision from the off set?

NU: When I wrote Hardy, I went in with the admittedly ambitious goal of addressing all of the crippling effects of toxic masculinity. (Just a little ambitious!)

The themes of Check, Please! and eventual subversions were a lot less contrived. I should mention that I started Check, Please! on a whim, and the comic was originally supposed to run a handful of episodes.

But because of the nature of Check, Please! — a comic where someone who’d get eaten alive on a hockey team not only survives, but thrives—the story becomes subversive by default. Bros who care a ton about each other? Who don’t feel uncomfortable around queer teammates? Who can be emotional and love pie? It’s a big “what if” scenario, pies and all. 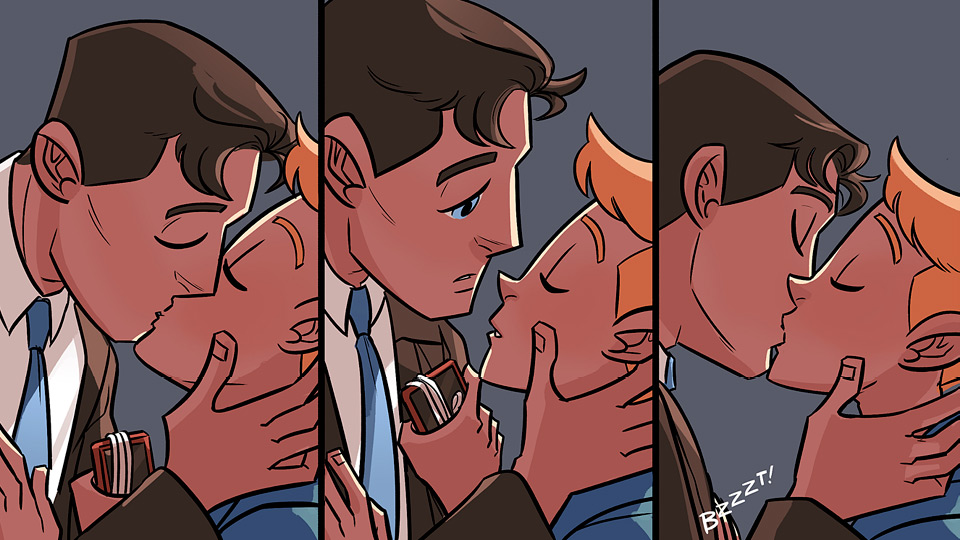 NU: Chris “Chowder” Chow makes me laugh more than any other character. He is so willfully and relentlessly enthusiastic! I’ve been re-reading the Twitter lately and I noticed: When he’s in a scene, characters have to respond to him. Chowder forces people to make choices — are you going to go along with my sunny disposition or are you going to look at me side-eyed?

It’s really fun and adds a jolt of life to any scene he’s in. Optimism often reads as naivete, but I think Chowder’s optimism creates tiny bubbles of conflict when you pair him with certain characters. He can’t help but push back against Dex’s skepticism or Nursey’s blasé attitude — and this creates humor as a result. 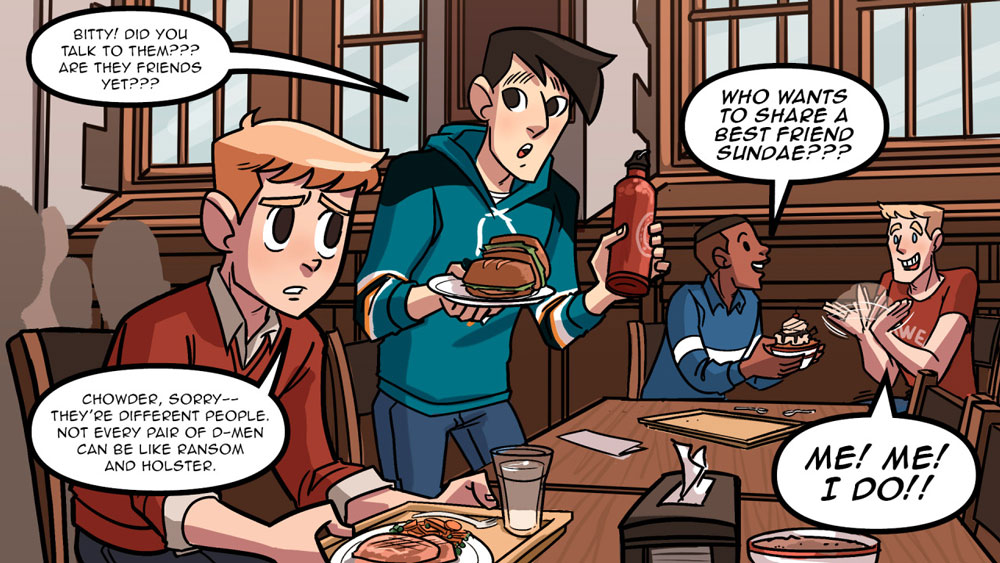 KR: What are your plans for Check, Please! going forward? Do you have a definite ending in mind?

NU: Check, Please! ends when Bitty graduates! And he’s finishing up his junior year in a few comics.

KR: And what about you? Do you have any other projects coming up our readers should look out for?

NU: I’m currently writing a script about girl’s softball at an art school! This story will be drawn by my good friend Madeline Rupert. And some of my more adept followers may have noticed that I’ve been thinking a lot about capes and spandex…

Check, Please! will be published by .01 First Second Books in Fall 2018, until then you can read it online at http://checkpleasecomic.com and support Ngozi on Patreon: https://www.patreon.com/ngoziu.