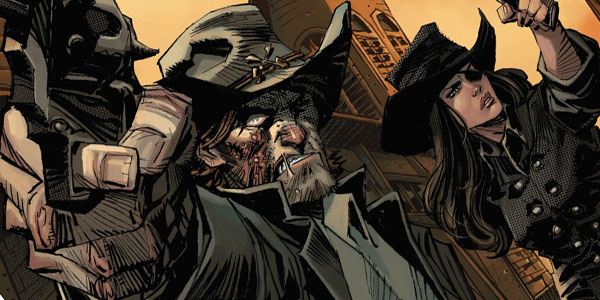 Jonah Hex has certainly experienced a whirlwind of change in recent months. A team-up with a time-traveling Booster Gold, being stranded in modern times, meeting up with everyone from John Constantine to Superman… and at the center of it all, Hex has had his trademark scar repaired before being dumped back in the Old West. At the center of it all, writers Justin Gray and Jimmy Palmiotti hit an anniversary of their own with DC’s classic character, and sat down to share some of their thoughts on Jonah’s recent travails, his encounter with the 21st century, and what hero is next to travel to distant lands far beyond their imagining in the pages of All-Star Western! 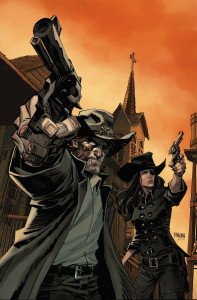 Matt Santori: Thanks for taking the time to chat with us, guys! Besides being one of the few consistent creative teams since the start of the New 52, issue #28 of All-Star Western marks your 100th issue writing Jonah Hex! What do you think it is for each of you, at his core, that make Jonah so compelling?

Justin Gray: For me it is that he never wavers from his ethical code. He is a high functioning sociopath who can act out our primal thoughts and desires without consequence.

Jimmy Palmiotti: A few things: an easily identifiable western character with a killer personality and the fact that no matter what happens, his choices are all very “ Jonah” and that stays consistent with the books. That and we have some of the best artists in the business working on Hex at all times.

MSG: The trip to the 21st century has been pretty up and down for Hex, but also illustrated his ability to adapt to even the craziest circumstances. What have been your favorite moments of Jonah facing modernity and what do you feel it’s shown us about his character?

JG: For me it is the small things and interactions about culture and society. The bit with Arkham and cigarettes being bad for you, the interaction with Hex and Gina and pretty much how he became an internet sensation. These are things we never imagined we’d be doing. 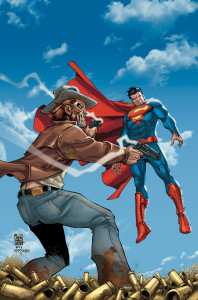 I’m proud that we were able to address gun violence in a way that showed how complex an issue it really is.

JP: All the small moments and observations he has made about modern life along the way. I am going to miss writing Jonah in present day mainly because of all the obvious possibilities we are given, but the audience wants Jonah back in the west and we always try to give the people what they want.

MSG: We’ve seen Hex face Superman, Batwing, and even John Constantine, but none of the guest stars have been as off the wall as Booster Gold! Is there a kinship in your minds between Hex and Booster that makes the pairing so perfect, or is this simply a case of time lost heroes crisscrossing?

JG: It is a perfect pairing and one I wish we could have continued. Booster bears a resemblance and similarity to Bat Lash, but being a superhero and his personality I feel we could have done a buddy book with them that had a good year’s worth of stories. 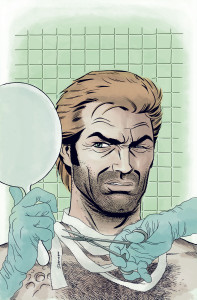 MSG: In #28, we see Jonah literally facing his own reflection with modern medicine able to repair his damaged face. In your mind, is Hex even… Hex, without the scars?

JG: Yes, in fact this was the thing we were going for. Superhero comics are so dependent on branding. Hex is more than a confederate uniform and a gruesome scar. He’s more than a Leone inspiration.

JP: That’s like asking if I would still be me with a big scar on my face. We stay true to the character, but in the end and what you will be seeing is how different others view Jonah without it.

MSG: With Gina’s decision to head back in time with Jonah, I suspect his eventual reunion with Tallulah Black will be more complicated than it could have been. Is Hex really destined for a life with Tallulah, or will Gina’s presence change history?

JG: One of the things that time travel fiction sometimes glosses over is how truly different life in a previous century can be from the romantic notion we develop in the future. As far as Tallulah is concerned she’s not shackled with the puritanical view that has dominated the idea of relationships and sex should be. She’s an adult. She knows what kind of man Hex is. Hex takes lovers. Tallulah takes lovers. That’s life. 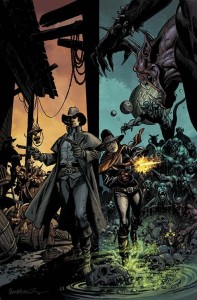 MSG: While Jonah Hex may be headed back to the Old West, it sounds like Madam .44 is headed off on an adventure all her own in upcoming issues! Time and space travel are now pretty much in Hex’s wheelhouse (both recently and back in the 80s), but why take Madam .44 out of her element?

JG: I’d be surprised if more than twenty people came forward saying they were diehard Madame 44 fans. I think even that is a high projection. So, why not experiment? This is comics. Someone else will come along and change it again.

JP: Madame .44 is in her element, just on another planet. Give it a chance. I agree with Justin, no one will hardly remember who she is, and even less where she is from, so we are having a bit of fun here. I think its an exciting was to introduce a new/old character and we have a love of the fantasy genre, so I think that will come through in the story.

MSG: Absolutely! I’m looking forward to it! Any final thoughts or special teases for the Comicosity audience?

JG: I just want to thank the fans that have made these 100 issues a reality. Without their support we would have closed up shop in 2006.

JP: Agree, we have a small crew of die-hard fans and we love each and every one of them for supporting our work over the years and for keeping Jonah alive this long. We would have never guessed we would still be here talking about the coolest character in the DCU.

I will tease that issue #34 has a guest artist that has more Eisners than anyone I know. More to come.

The rumors of All-Star Western’s demise have been greatly exaggerated, but that doesn’t mean you shouldn’t run out to your comic shop and buy this book right now. It’s worth it. And while you’re there, grab some copies of Jimmy Palmiotti and Justin Gray’s Batwing, out this week, also from DC Comics. You won’t be sorry.