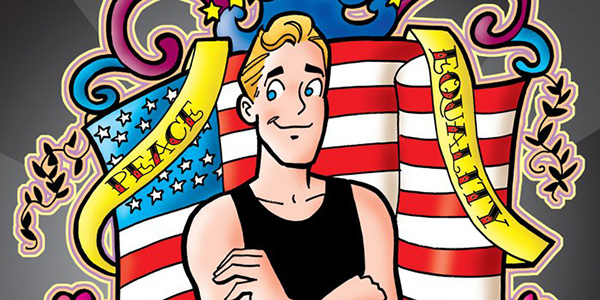 Wizard World Chicago was held August 8-11 this year, with guests aplenty filling up a rather large artist alley. Chief among them was Dan Parent, writer and artist of numerous Archie Comics, most famously Kevin Keller starring Riverdale’s first gay teenager. Parent is the recent recipient of a Media Award for Outstanding Comic Book for Kevin from GLAAD, the leading media watchdog for the LGBT community, and first in the comics community to raise the ire of anti-gay organizations like One Million Moms and increase sales as a result. Dan was kind enough to take time out of his busy con schedule to talk to Comicosity about how Kevin came to be, what his dating life is looking like, and what we can expect to see from Archie Comics in the future!

Matt Santori: Dan, first off, congratulations on winning the GLAAD media award this year for your work on Kevin Keller! The win was a long time coming!

Dan Parent: Thank you! It was very exciting. We are very happy and were very honored to have received it. We don’t do it for the awards, but when they come, we don’t turn them away either.

MSG: Can you talk a little about the original impetus for creating Kevin and the process of getting him onto the page? 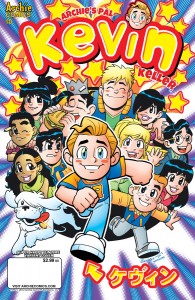 DP: The way Kevin came into the universe was that, three years ago, we wanted to bring Archie into the 21st century. It felt like things had gotten a little stale as far as the status quo in Riverdale. John Goldwater had come on as our CEO and he came up with the idea to bring more diversity to Riverdale and introduce new characters. We were already introducing a bunch of new characters at the time and discussed a new gay character. He immediately said, “Let’s do it. Do it, but do it correctly. Don’t just out a character that’s been there forever for no reason or throw a character in there and forget about him. Make him a real character.”

And we did! That’s how Kevin came about in Veronica, and history was made!

MSG: You’ve been writing Kevin for almost three years now. How do you think the character has evolved for you in that time?

DP: Well, when he started out, Kevin was just a new kid in town. We found out, when his new series started and he moved into town, that life wasn’t always so easy for him. He grew up travelling around the world. Kevin wasn’t the dashing, good-looking kid he is now. He grew up with a lot of bullying and that kind of stuff.

Once he had a full hold of Riverdale, we got him dating. Now he has a boyfriend. He’s evolving like the other characters are. At first, people thought he was a little perfect, but his flaws are starting to come out. Next year we have some really exciting stuff for Kevin that we’ve just been working on this week. I can’t reveal it yet, but it’s another big step for Kevin.

MSG: Recently, you’ve been exploring Kevin’s romantic life, first with Clay (his future husband) and now with Devon, who’s at a slightly different developmental stage than Kevin. Can you talk a little about that difference between the characters? 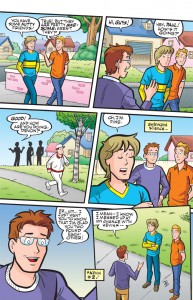 DP: Devon hasn’t had the upbringing Kevin has. Kevin comes from a very supportive home and has been encouraged to be who he is, whereas Devon is the other side of the coin. He hasn’t been and you see it in his personality. He’s a little rough around the edges. He’s a little more brash than Kevin is. A little more selfish. He has issues, and I think some of them stem from having to hide who he is.

So, we see Kevin dealing with Devon’s background, which is a little bit different from his — but they still have a connection.

MSG: Along those lines, has Kevin just always been out? Kevin’s parents and friends are clearly wonderfully supportive of his identity today.

DP: He has been. In the story when he came out to his parents and he figured it out, he was out pretty soon afterwards. When he was hanging out with his gal friends, he started to notice guys, at around 13 or 14 years old. If the timeline is correct, Kevin was about 15 years old that he came out to his parents. Today in the book, he’s about 16, 17-ish. So, it’s been a little while. Archie time is a little strange. (laughs)

MSG: If anything seems to define Kevin, it’s his high energy, go-getter nature. What propels Kevin to be this type of person?

DP: I think a lot of it is he holds his father up on a pedestal, I want to say, or in very high regard. It means a lot to him to live up to that ideal. That’s one reason why Kevin sort of aims high. I think he’s also seen both sides. He’s been on the bad side as a kid who was bullied, and now he’s very popular. He can empathize, and that makes for a strong character.

And I think he wants to do a lot of things in life. He’s young and idealistic, kind of like Archie, although Archie’s not really as motivated as Kevin. All Archie cares about are Betty and Veronica. He’s more grounded in that area, while Kevin is more career-oriented.

MSG: That’s a great thing to see in comics, especially since there aren’t very many LGBT teen characters out there.

DP: Yeah! And you’ll see more, because, of course, Kevin is dating. And we will be seeing a wide variety of LGBT teens in Archie Comics.

We were a little eager for the boyfriends to come about early on, but we had a couple of stories we wanted to tell first and we knew we would get to it. Even with Kevin’s introduction in that issue of Veronica, what always comes first is the story. The characters actually come second to the storyline. So, even with the whole “Kevin coming to town and Veronica having a crush on him” story, we still need to do those funny Archie stories. We don’t want to get too serious. We’re still out there to entertain. What we found out with the Kevin Keller stories is we can do both. We can get a little serious, but we just have to remember we’re doing Archie Comics.

MSG: Any plans for a lesbian, bi or transgender presence in Riverdale any time soon?

DP: I’m sure, yes. I don’t know what the timeline is, but I don’t see us slowing down with the progress. I see us moving forward. It’s really just a matter of time in moving forward with more characters.

MSG: Do you find it difficult to instill drama in the book in a universe where outcomes seems so pleasant and positive at the end of every single issue? 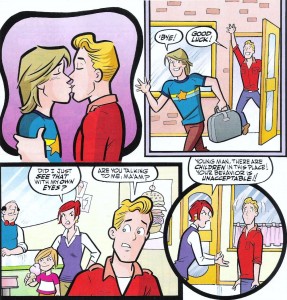 DP: It’s a little different now because we’re doing longer stories. If we were just doing five and six page stories still, it would be harder to get into the drama. With the longer stories you can get deeper into the characters and still have the funny stuff too. We’re always are careful that if we do a more serious story with Kevin, we go back to the light-hearted stuff too.

MSG: The latest issue, Kevin Keller #10, had that balance to it, with its ode to the One Million Moms protest earlier last year that inadvertently earned you a ton of success.

DP: Absolutely! We’ve got nothing against them! (laughs)

I noticed they were really silent on this one, though. I think they know to stay away because they don’t want our sales to go up too much. They were quiet on the kiss issue.

MSG: How was working with George Takei for issue #6? 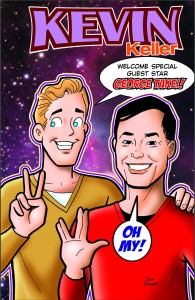 DP: He’s as great as you think he is. He’s just a wonderful person. I met him at a convention and told him about Kevin. He was very excited. Our paths crossed a year or so later when he was on the Howard Stern Show talking about Kevin. I got in touch with him and he was really thrilled to be part of an issue. We did a signing with him in New York and that was great. He’s just the perfect person to work with.

MSG: Any last thoughts or special teases for the Comicosity audience?

DP: We’re still going strong with Kevin, Betty, Veronica, and the whole Archie gang! We have some plans for Kevin for 2014 that are pretty exciting and his story also continues in Life with Archie, where he’s running for senator [in the future]. There will be more team-ups, of course. The trade is out on the recent Archie Meets Glee mini-series. But right now, I’m just trying to keep up on my deadlines!

MSG: Thanks so much, Dan!

Dan Parent is the writer and artist on multiple monthly books from Archie Comics, including Kevin Keller, Veronica, and Archie Meets Glee (with writer Roberto Aguirre-Sacasa).