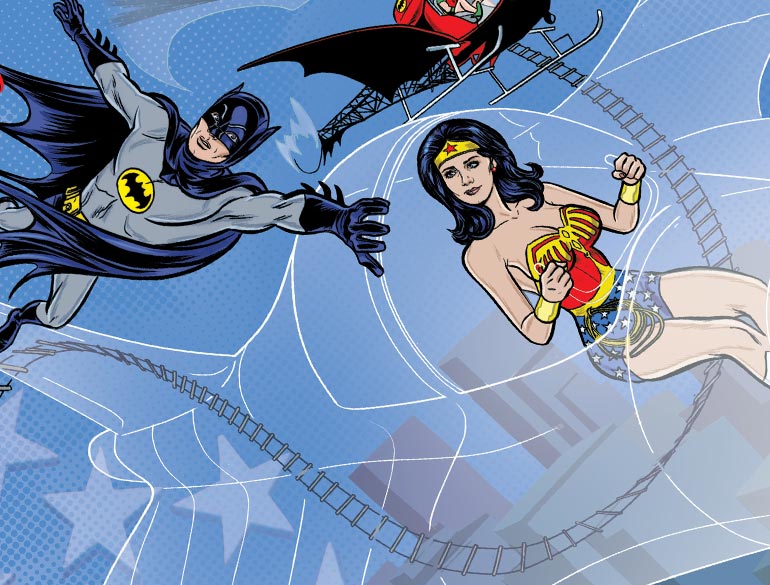 We’ve seen Batman and Wonder Woman on movie and TV screens before — and certainly in the comics — but never like this! Writers Jeff Parker (Batman ’66) and Marc Andreyko (Wonder Woman ’77) have come together for the ultimate team-up across the ages. Comicosity sat down with the creators to find out how these two characters first meet, what inspired the villain of the story, and how the narrative will move across the years of the Golden Age of television:

Marc Andreyko: That’s a good take. For me, it was just simply a matter of rereading all the stuff that Jeff had done with the book. To be able to write the characters in the same voice he had previously written in. 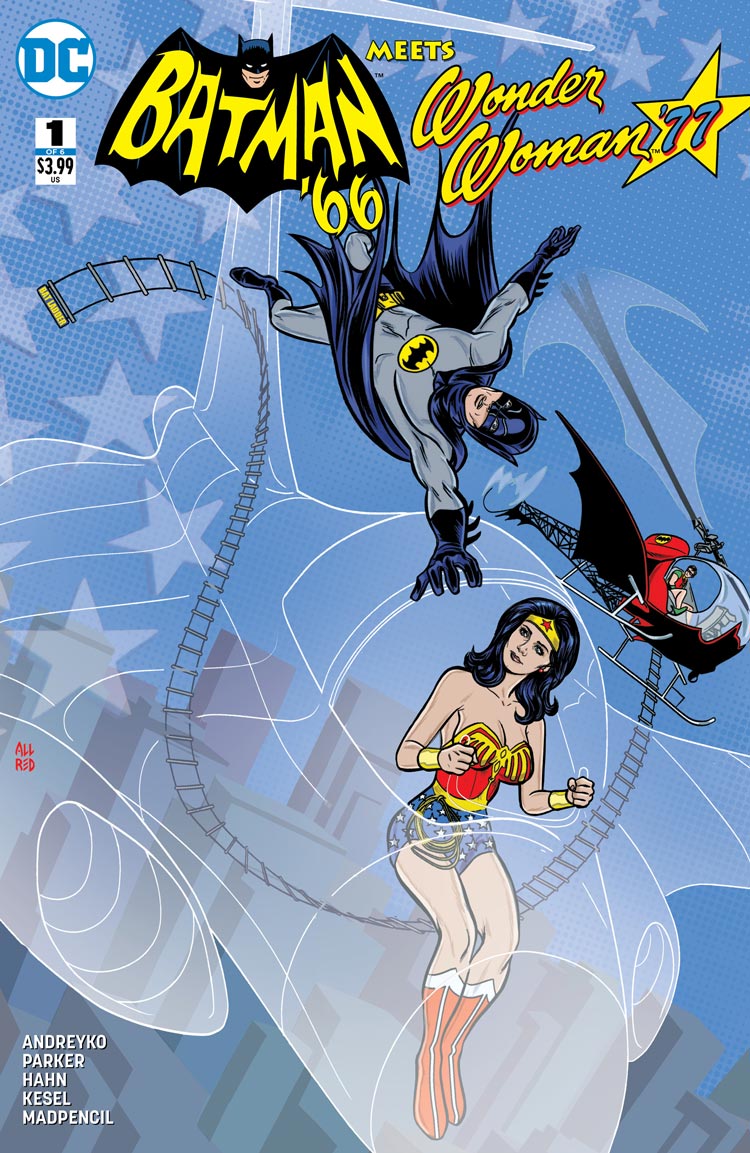 I wanted some consistency there, because the way he adapted the 1966 Batman TV series world to the page is much more difficult than it looks. He makes it look really easy, but to capture the tone of that show, and bring that to the world of Wonder Woman, was a fun and exciting challenge.

Jeff Parker: And vice versa, of course I did the same thing. Marc take the Lynda Carter Wonder Woman a little farther and really gives her stuff to do that I’m sure she would have loved to have done on the show.

That’s kind of the real secret thing to do with these sort of books. You don’t just emulate the show. You take the show a little farther. What if they had bigger production values or big time writers and directors working on it? Those types of people can really lavish the detail on their end, and Marc does that with her.

You get Lynda Carter’s voice, for one. But you also get that sweet attitude of hers. She’s very hopeful, not pessimistic at all. I never get tired of the whole “Man, I really hate to have to beat anybody up.” and then she does it. [laughs]

It’s really refreshing in an age of super-heroes who just can’t wait to get into a fight. She really can’t. She doesn’t want to do it. But I guess she’s going to have to flip over this car and beat up all of these people inside of it.

MA: She’s almost like a parent whose kids are acting up. “If I have to stop this car…” 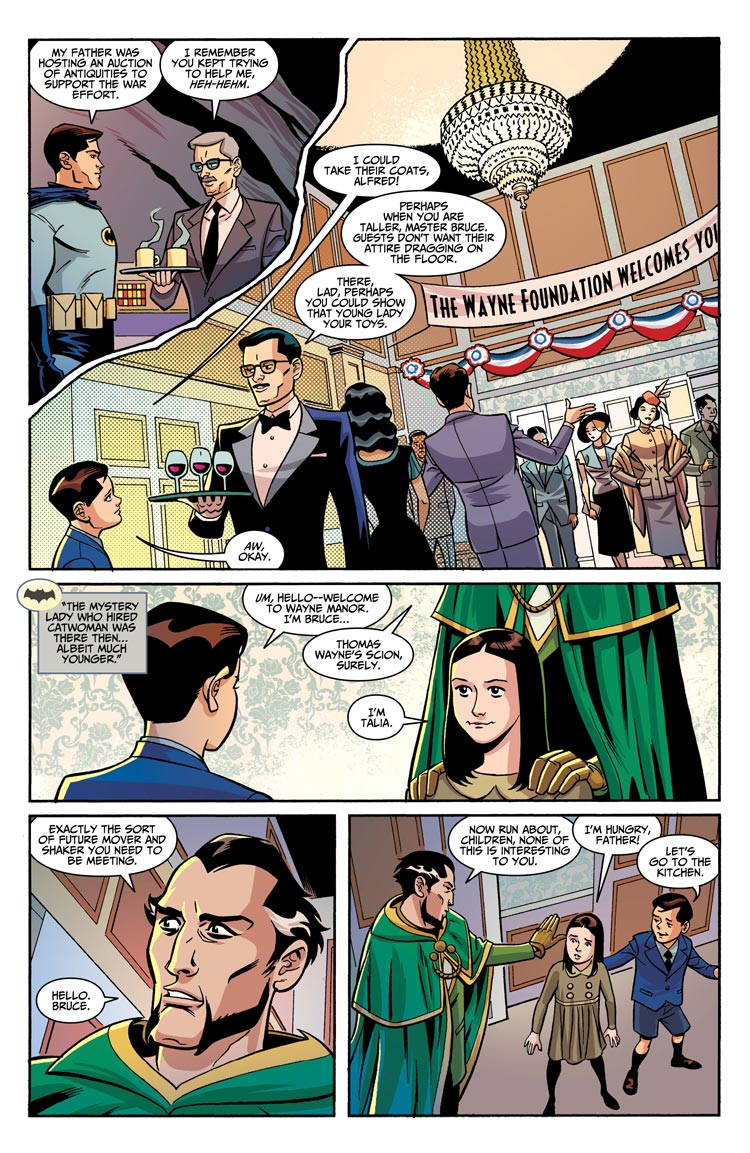 MS: Speaking of kids, you’re setting the first story back in 1942, circa the first season of Wonder Woman. What you get out of that is very very young Bruce Wayne. Why start there as opposed to 1966 or 1977?

JP: Well, it was Marc’s idea of Wonder Woman being the inspiration for Batman. It just seemed really neat. She’s really positive, and everything he espouses on the show about wanting villains to change their ways and use their talents for the benefit of the world is very in line with that version of Wonder Woman.

MA: Oh yeah. This works really well. We’re not saying that the Batman ’66 always has this origin. It’s really just for this situation. But it works great.

Because you can’t be the same as your typical version of Batman where he’s scarred by childhood trauma. Why is our version relentlessly positive in the face of that? This sort of answers that in an interesting way. 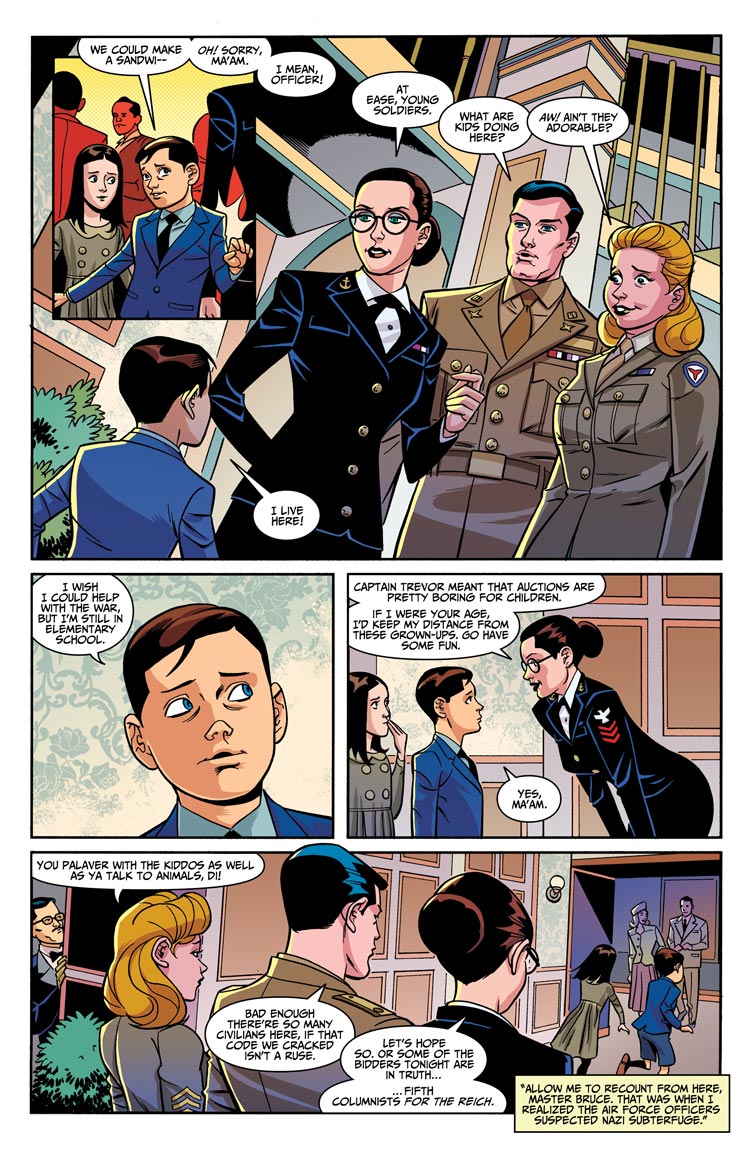 MS: It is interesting to be working with such a different version of Batman, and then bringing in a villain who, in some sense, was created as a reaction to — or move away from — that 1960s pop era: Ra’s ah Ghul. How was adapting Ra’s and Talia in those terms, moving them into a more light-hearted universe?

JP: For me, their storyline in the old comics and films is a little darker, but bringing them into this comic book made them more exotic and world-travelers. This is where the deep mythology of the League of Shadows plays out, rather than as darker characters Neal Adams and Denny O’Neil originated.

We’re looking at them through the prism of the TV show and through the type of story we’re telling. There’s enough dark and gritty Batman-Ra’s ah Ghul stories out there. We wanted to tell one that felt like it would fit into this world.

MA: Yeah, we cast it in our own head, although not based specifically on one performer. To me, I think those characters fit in fantastically well into the story. I’m a sucker for anything that has immortals in it. And I like playing up that Talia and Young Bruce always had some sort of connection, even going back to their childhood. It feels like a good fit to me.

JP: It is fun writing young Talia and young Bruce because, at the age of 12, we can show that who they are and will be is almost fully formed. Of course this is what they were like as kids!

I’m also a guy who grew up in the age of the Goonies, so being able to tell a story about two resourceful kids fighting Nazis in a hedge maze hits all of my buttons. 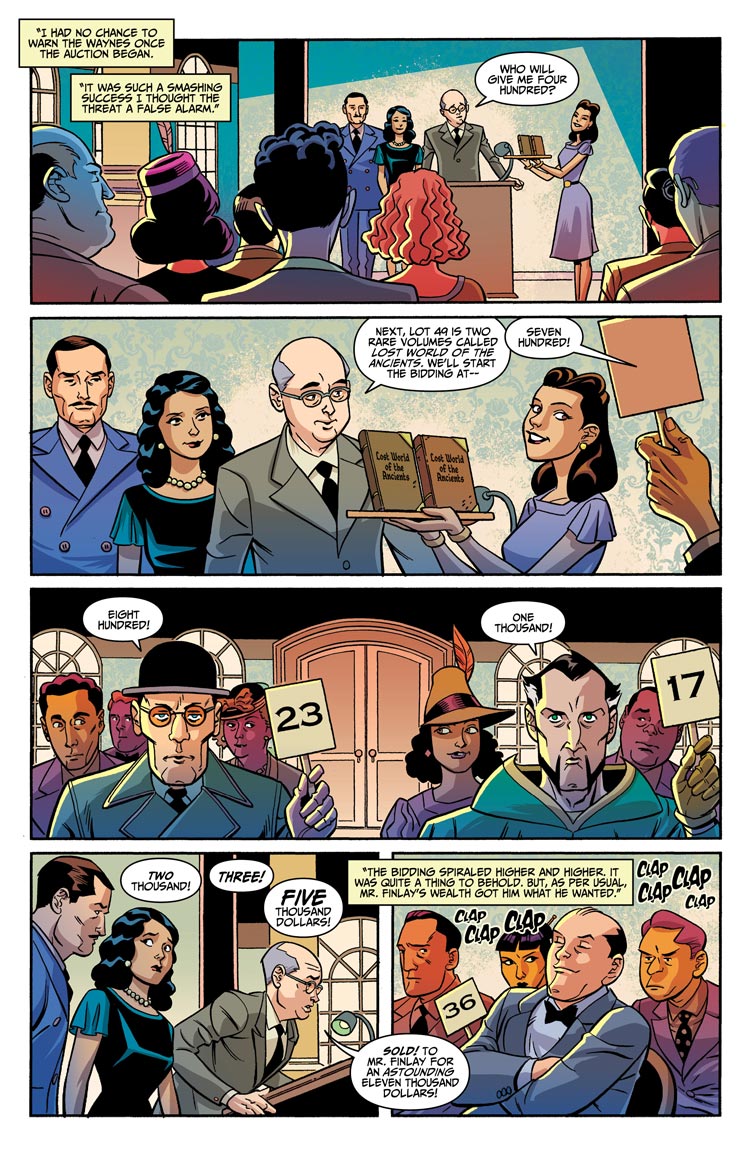 MS: How has the process been working with David Hahn on art?

JP: We gave all of of our thoughts to David Hahn, and basically said, “Make it work.” And you can see, he really really does.

We did a Batman ’66/Man from U.N.C.L.E. crossover right before this together and it was coming together so well, editorial basically just said, “David and Karl [Kesel] — these guys are just nailing it.” These guys are really gelling. We figured, let’s take advantage of this and just keep rolling. D’uh.

MA: The look of this book couldn’t be any more gorgeous. Every time I get a pencilled page or an inked page or a colored page, every level of it is just gorgeous. I don’t know if I’ve ever been on a project to date where every one working on it was this much in sync. There was really no learning curve. All of us were so excited to be working on these characters and so enamored of each other’s work, that it was nutso.

It’s been virtually a painless, effortless experience writing this. I’m getting really spoiled. It’s always so exciting to see where Jeff leaves a character for me to pick up or to see where he goes when I put one done.

It’s almost been like being an improvisational project. If the readers have one-eighth the fun reading this book as we have had making it, it’s going to be hugely successful.’

MA: Oh yeah! Seeing some of the designs and costumes David has come up with for characters you haven’t seen before in ’77 has been fun. One character in particular might split the internet in half with their perfection, in fact. 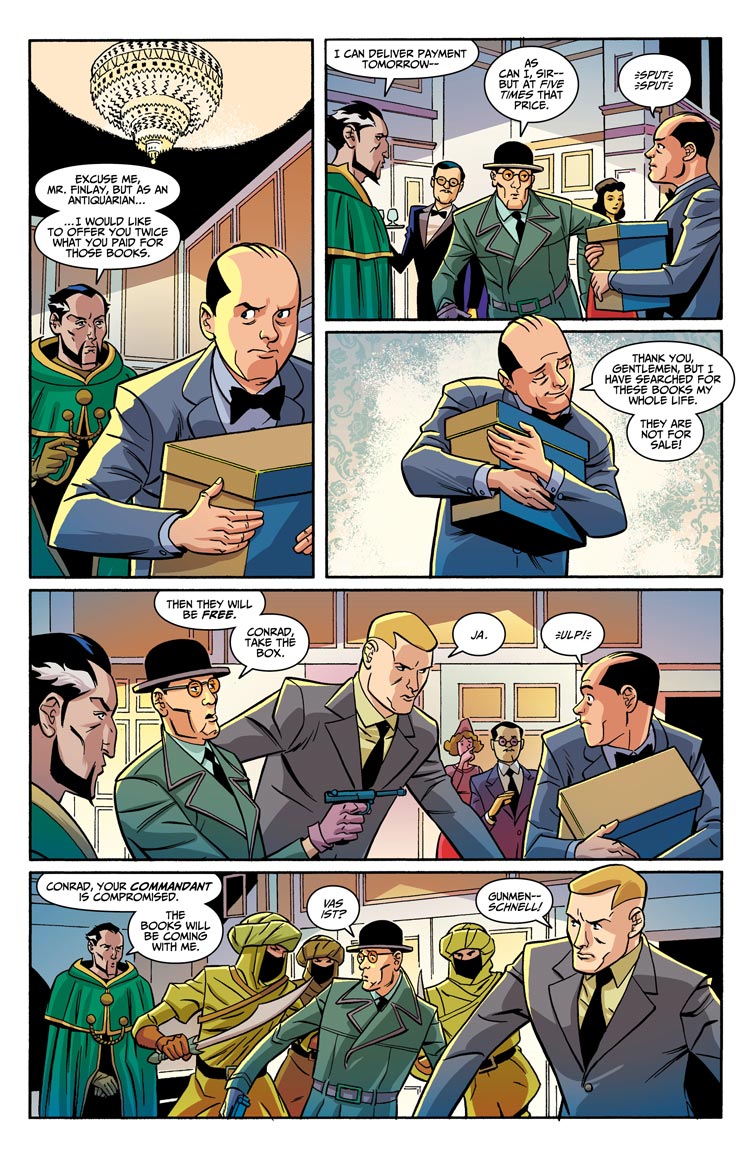 MS: Wonder Woman seems fairly easy to handle here as an immortal character. How do you begin to approach that in terms of Batman and Robin as we see them in the future?

JP: That is what we had to spend the most time with, definitely.

MA: You know, it’s just a matter of capturing the seventies and looking their timelines, asking “What if this happens? What about that” I hate being vague, but I don’t want to spoil anything about that last section. It’s just jam-packed with such fun stuff.]

One thing I can spoil is that you will get to see KIller Croc in a 70s, Serpico-inspired, leather jacket. And I bet that’s the first time you’ve ever heard someone say that sentence.

Pick up the first print issue of Batman’ 66 Meets Wonder Woman ’77 this Wednesday from DC Comics!