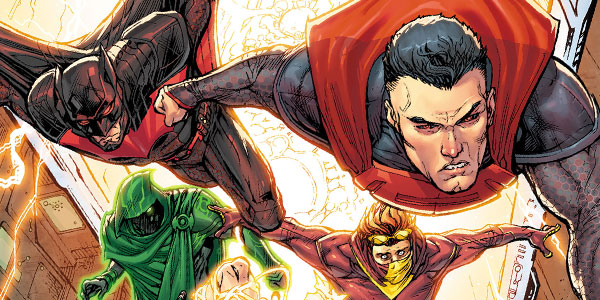 Way back in the late 90s, when Grant Morrison relaunched JLA, artist Howard Porter was there to reintroduce the world to a team of icons that had long been separated — Superman, Batman, Wonder Woman, the Flash, Green Lantern, all joining together to protect the world from its future. Now, tables have turned and it’s the future that needs protecting, as Porter helps reassemble these icons into a new team: the Justice League 3000. Porter stopped on his way back through the time stream to share a little bit about how he plans on outfitting these strangely familiar heroes, what type of world the 31st century is, and how it feels to return to the League after all this time. 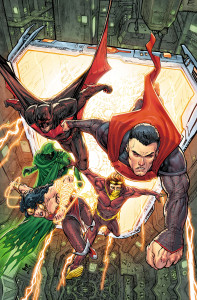 Matt Santori: Howard, thank you so much for taking the time to share your thoughts, and welcome back to the Justice League! How does it feel to be taking on the World’s Greatest Heroes once again?

Howard Porter: I have to say: it feels just great. Do you know the part of the movie towards the end, where all the conflict is resolved, all the pieces are put back together, some important life lesson was learned, some massive reward was earned and we see the silhouettes of the characters as the sun rises behind them? It feels just like that, but better because I didn’t have to defeat any giant robots or zombie outbreak.

MSG: How has the working relationship with writers Keith Giffen and J.M. DeMatteis — no strangers to the Justice League themselves — been going and what challenges are they giving you to tackle that are fun and unique?

HP: I can’t express just how fortunate I feel having this opportunity to work with these legends — their passion for this project is contagious. They really want me to feel invested in the book. I have been encouraged to be as creative and have as much fun as possible. I would say the biggest challenge on the project is beginning with a blank slate and having to create new takes on characters and worlds. It’s quite nice to not have to fumble around for reference and never having to worry about getting costumes wrong! 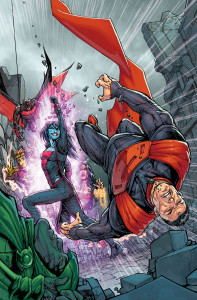 MSG: For sure! And while Superman has a long history with the 31st century, of course, we’ve never seen his look redesigned for the era before. What were your primary concerns with rolling out new versions of these five characters?

HP: I spoke with Keith and Joey prior to tackling the redesigns to pick their brains about where they wanted to go with things. They had a very specific vision for the mechanics of clothing and costumes but were hesitant to give me any direction for the actual look and feel. There had been some designs done prior to this and they wanted me to attack it with a fresh eye.

MSG: Your initial character designs for Justice League 3000 do strike an interesting balance between classic iconography and new forms of texture and material. What was your inspiration for the almost cellular structure of many of the team members’ togs?

HP: Giffen has a very clear vision of the way clothing and tech will work in this future. It is the evolution of the ambient light technology that can be seen in his OMAC series he did with Dan DiDio (if you haven’t read OMAC, you should go and treat yourself to a huge helping of fun). The material is made up intelligent cells that can form any clothing or costume that the wearer imagines.  You can tear bits away where you don’t want material and add it elsewhere. I chose to use seams and hexagon patterns to indicate a pixel-like modular feel. Honestly I can’t wait for this stuff to be invented, so I can say goodbye to all my husky-man sized t-shirts. 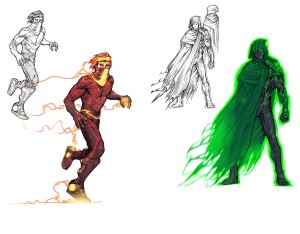 I also got the rundown on how their personalities would be treated and Giffen said if they looked nothing like their current versions that would be great. So, the goals were to make them dark, be identifiable but different than what we have known and reflective of their personality. I also wanted a unified element that would help tie them together and have the feel of a team.

MSG: Your design for Green Lantern definitely falls into that category of slightly dark. What were your motivations in developing the look of the character in a more spectral, mysterious form?

HP: GL was the one character that had an element I was told to incorporate in the design: his cloak. It was to play an important role in the story and is a pretty fantastic plot point. The way I treated his cloak is a not so subtle nod to the visuals of the creepy specter Hal Jordon we know and love. I also know how fashions work and I’m pretty sure in a thousand years capes will be in vogue again, I just hope shoulder cannons don’t make a comeback so soon.

MSG: Ha ha! The world of the 31st century in Justice League 3000 has been described as very different from visions of the future we’ve seen before. What have been your key influences for designing this new world, and what can readers expect to see out of the gate?

HP: In our stories you will see a huge contrast between worlds populated with futuristic technology and those with little more than contraptions that have been cobbled together with salvaged parts. We are treating the environments as if they are supporting characters in the series and attempting to build a unique universe that will hopefully be as identifiable as Gotham or Metropolis. In the very first issue you are immediately thrust into a world that is dirty and archaic and, with the turn of a page, a world that is pristine and serene. I am trying to think very cinematic with the designs, trying to imagine what someone like a Ridley Scott might do. 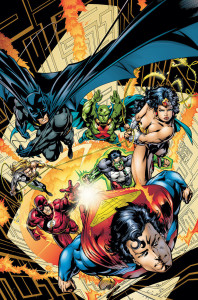 MSG: Your work on the previous JLA run with Grant Morrison balanced the light and dark of super-heroics very well, showing a team which faced dire circumstances but could still stand up as a beacon of hope for the people of Earth. How are you planning to strike that balance in the new series, in a very different era of comic book expectations?

HP: While the impossible situations this team finds themselves in is certainly as dire and threatening as we have ever seen in funny books, the dynamics between the heroes is equally deadly and often humorous. Giffen and DeMatteis are achieving the perfect balance of serious threat and levity in a fantastical universe. I would love to get more specific and share examples, but I don’t want to spoil anything!

MSG: Fair enough! Any final thoughts or special teases for the Comicosity audience?

HP: Thank you for taking the time to read my incoherent rambling grammar. Now you know why I learned to draw after I found out I couldn’t write! I really hope people give our book a try. I think it won’t be like anything else you read that month and we are very proud of what we have done. 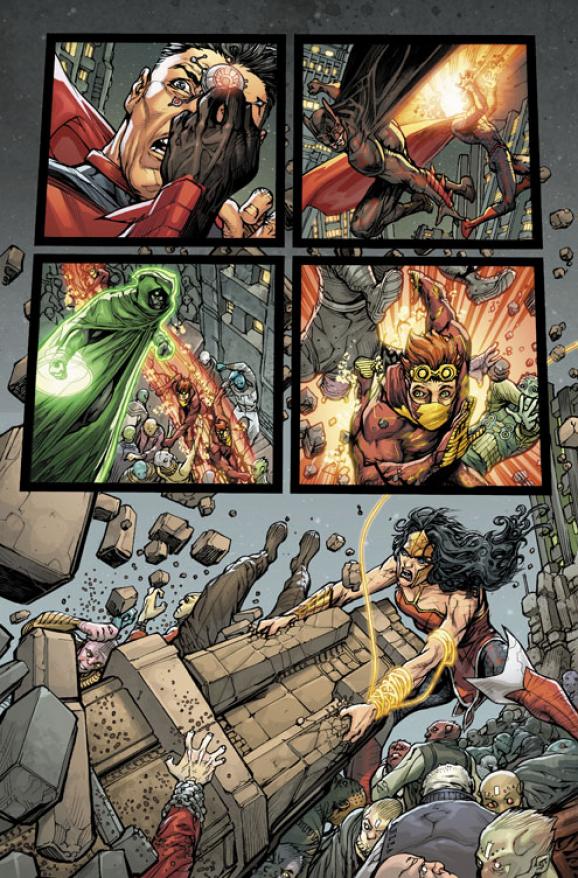 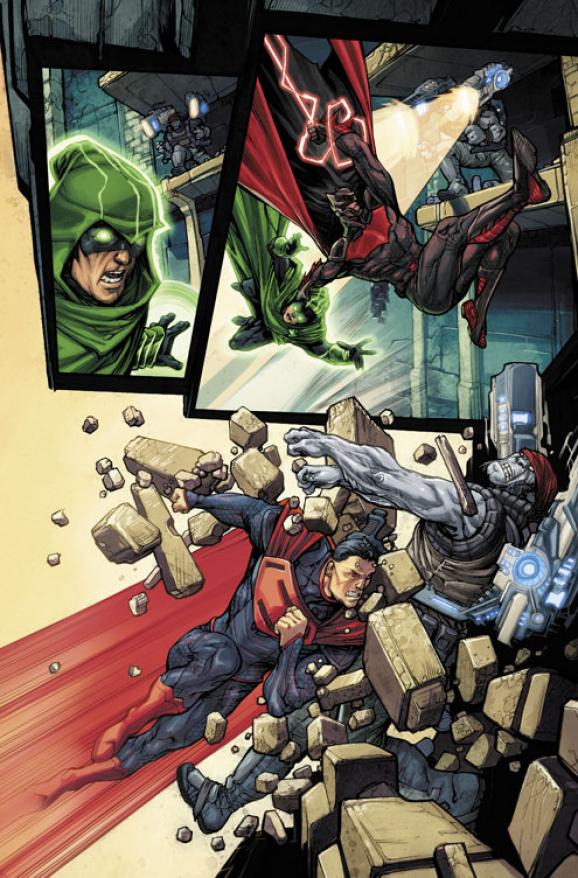 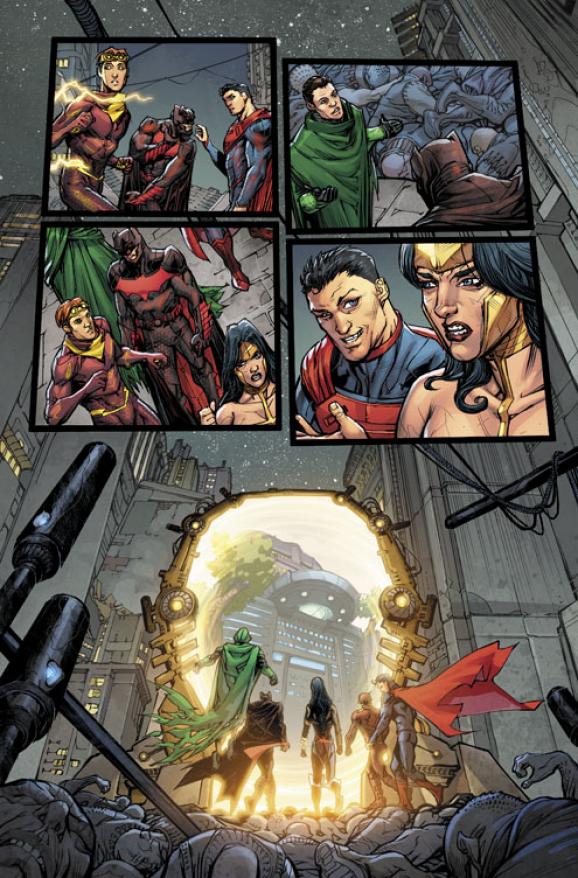 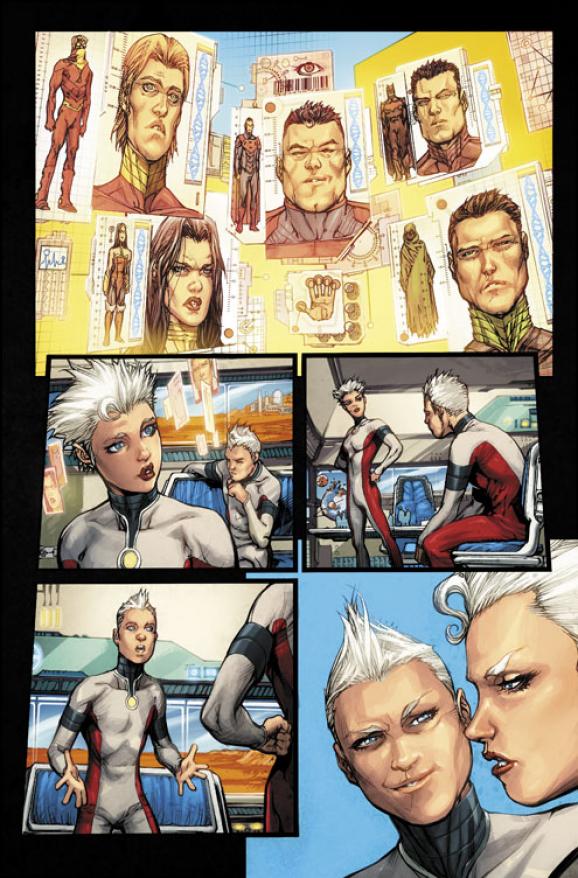 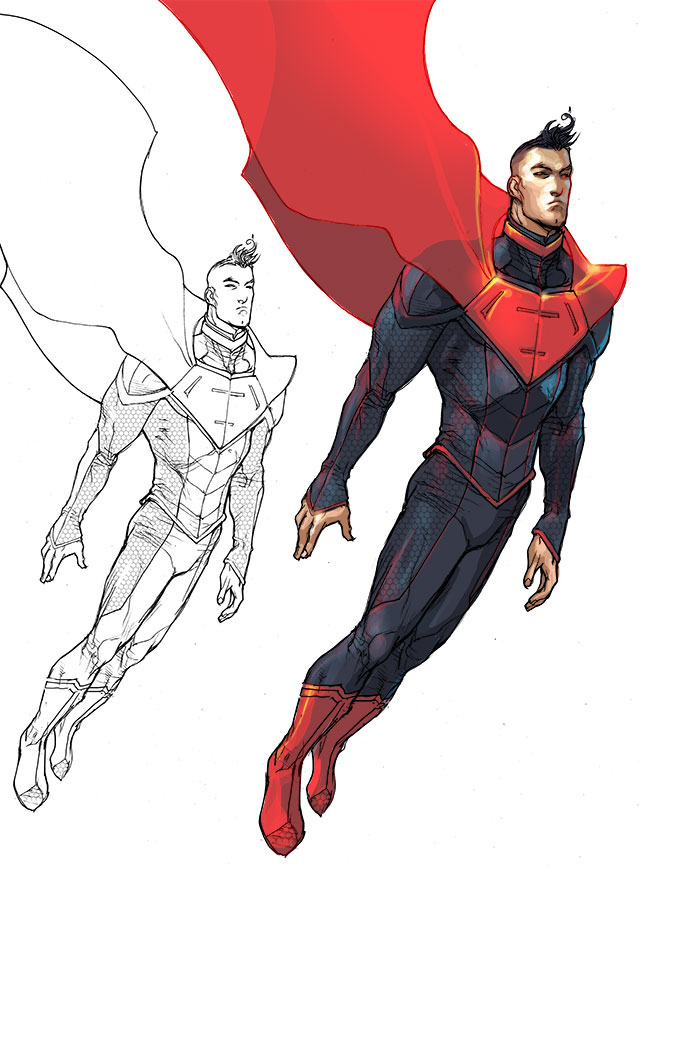 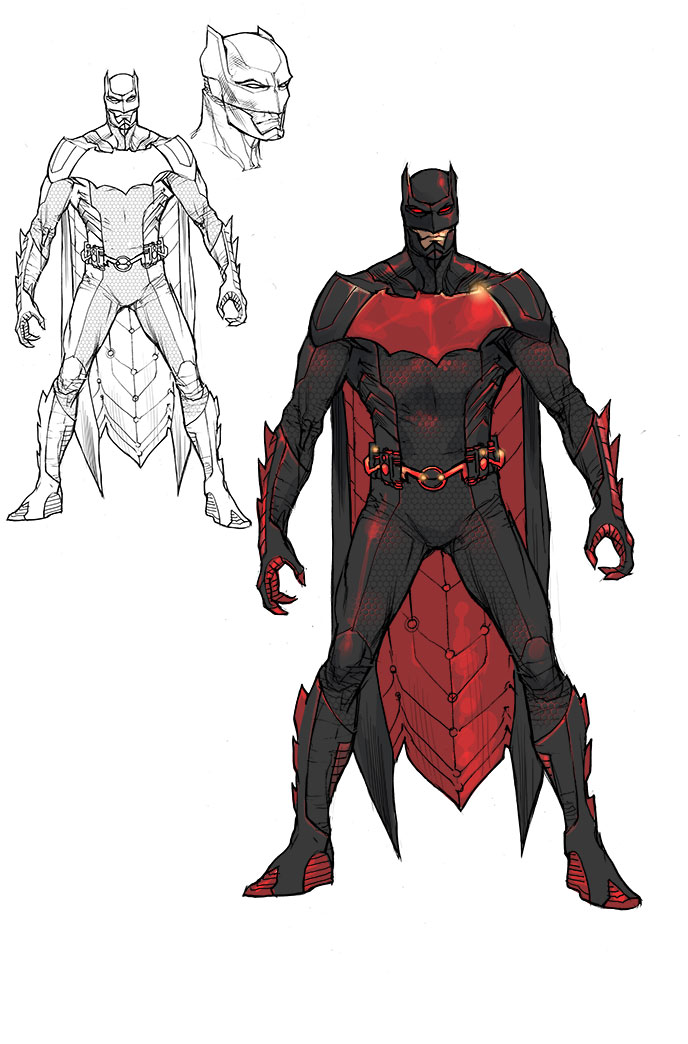 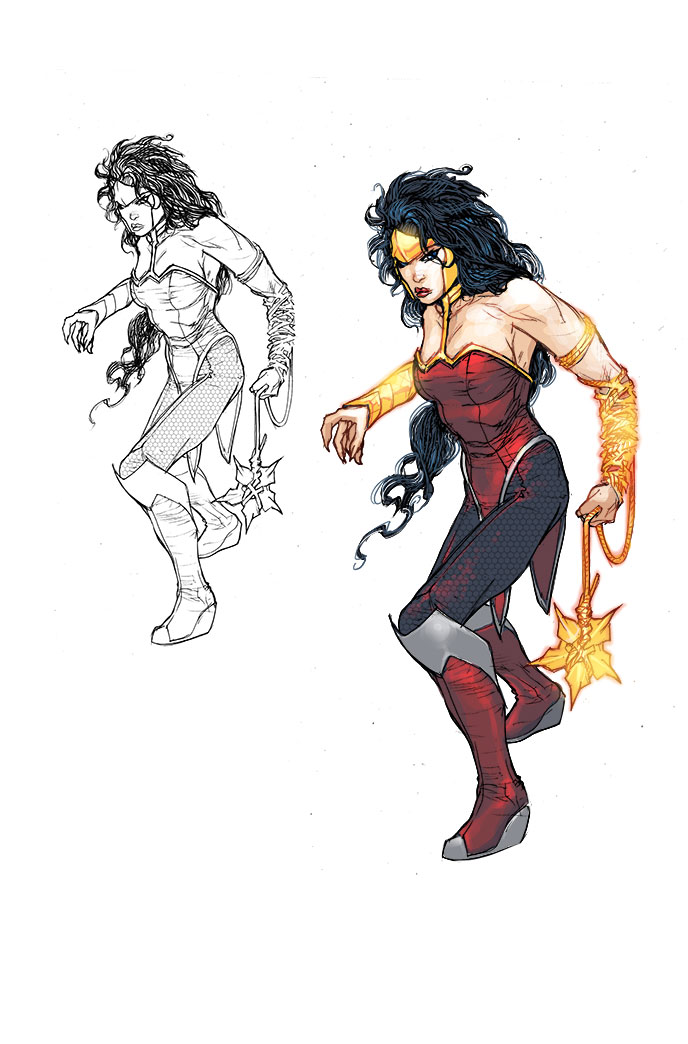