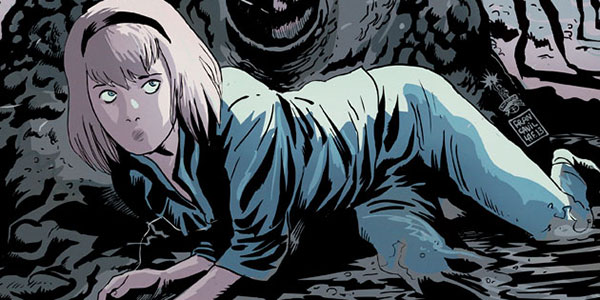 Archie Comics has taken the market by storm with many of its titles, but none lauded so significantly as Afterlife with Archie, a horror take on the classic Riverdale gang. In part one of a two part interview with the Afterlife team, Comicosity speaks with writer (and new Chief Creative Officer) Roberto Aguirre-Sacasa about his take on the Archie brand, where the concept behind Afterlife originated, and what’s next for a certain teenage witch! 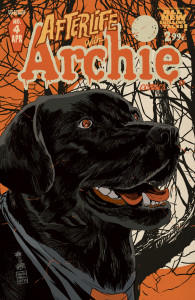 Matt Santori: Roberto, congratulations on the new position at Archie Comics! We have seen a little bit of what a Chief Creative Officer manages over at DC and Marvel, but what does the scope of your position entail?

Roberto Aguirre-Sacasa: There are a couple of different areas. I split my time between LA and New York, but mostly I’m in LA, and a big part of my job is educating people in Hollywood about, basically, all things Archie. Letting producers and writers and directors know about the characters we have, the properties we have, and trying to put together some film and television projects. Theatre stuff, too. So that’s one thing I do.

The other is work with Archie Publishing, wherever I’m needed. I’m supporting Alex Segura with the Red Circle relaunch. I consult with Mike Pellerito and Jon Goldwater. I pitch ideas. I work with other writers on their pitches. And I fiercely campaign for the projects I want to write. Witness Afterlife and, coming soon, Sabrina.

MSG: Part of what has distinguished Archie Comics over the last few years is its sheer determination at diversifying its comics — in more ways than one. The genre diversification begun by a book like Afterlife with Archie is pretty astounding for a company like yours. What are your thoughts on this mission going forward?

RAS: I think what Afterlife has made clear is that Archie fans are super-passionate — and super-willing to see these characters they know and love and grew-up within wildly different contexts. And, provided we don’t mess with their core, they want to see Archie and his friends in different situations.

Mike Pellerito has been doing an amazing job with all of the variant covers Archie has been putting out over the last few years, and when you look at them — Archie drawn in the style of a New Yorker cover, Archie in a film noir style, Archie in a “Weird Fantasy” cover — it’s shocking how well they all work. For whatever reason, the Archie characters are incredibly malleable and adaptable. And they thrive in those contexts. So I guess that’s a long-winded way of saying, “Expect more diversification” in the coming year. 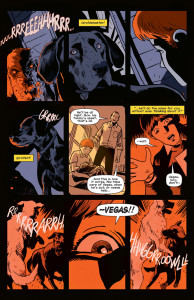 MSG: On the other side of the diversity coin is, of course, the expansion of race, ethnicity, gender and sexual orientation representation in the Archie books. As Chief Creative Officer (and a writer of one of Archie’s most popular titles), what drives your commitment in this area and how do you see it growing in the coming year?

RAS: Archie — the company, the characters, the brand — is in constant dialogue with the world. And it must reflect that world. That’s been one of Jon Goldwater’s mandates since he started five, now almost six years ago: Riverdale is not frozen in amber. It’s today. It’s now.

So there has been some growth in representation — Kevin, of course, and Mayor Martinez, and, in the pages of Afterlife, we have Ginger and Nancy — and there will be more growth. It’s a huge priority for us as a company, and for me, personally.

MSG: Afterlife with Archie is a huge breakout hit, and the last issue is honestly one of the best single issues of a comic I have read in a very long time. What were your inspirations for the flashback tale you wrote of Archie’s childhood, as well as some of your general inspirations for the title?

RAS: The inspiration for it came, honestly, from Jon Goldwater telling me that Archie was getting a new dog, Vegas, in one of the double-digests. I was like, “Vegas has to be in Afterlife!”

I’m a huge dog-lover, and in a weird way, Afterlife is all about kids and their pets. Jughead and Hotdog, Archie and Vegas, Sabrina and Salem… I knew, for issue #4, I wanted to zero in on Archie, on his relationship with Vegas and on his relationship with father, so the flashbacks just kind of happened organically. We’re really proud of that issue, and it’s made us want to do more issues like it. Issue #6 is focused on Sabrina, for instance, and we’re going to give Reggie his own showcase, as well. 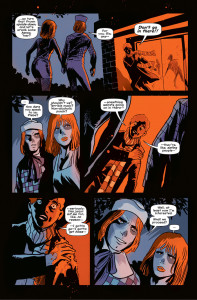 MSG: Archie himself was at the center of Afterlife with Archie #4, although the entire world of Riverdale features in that title, among others. How do you negotiate the balance between such a large cast and giving the guy whose name graces the title banner his due — here and across the board?

RAS: It’s largely instinctual — and, of course, driven by what the story needs. After the laser-focus of #4, it was great to get back to the larger canvas of issue #5 — though in a way, that issue became all about Veronica’s butler, Smithers.

As for Archie, he’s our hero. As unlikely a hero as he is, he’s our avatar, our Everyman. I also happen to think it’s great and refreshing that he’s basically a good kid, not cynical, not dark and brooding. Trying to do what’s best, even though more often than not he messes up. (It remains to be seen whether his decisions and choices in issue #5 turn out to be smart and prescient or colossally bone-headed…)

MSG: The subplot with Cherry Blossom and her brother in Afterlife with Archie is echoing “Flowers in the Attic” a little bit in my mind. Am I far off or are we seeing a very different take in more ways than one in this title?

RAS: We’ve said from the beginning, Afterlife is not just a zombie book. It’s a horror book. So we’re going to be weaving different horror tropes into/throughout the title.

I pushed Cheryl and Jason in that direction as a direct homage to Flowers in the Attic, for sure, specifically to signal that there was more to this book than just zombies. (Also, Cheryl has always been such a femme fatale — some might even say over-sexualized, in a weird way — I wanted to explore what issues/demons might be driving her…)

Issue #6 is a love letter to Lovecraft. Issue #7 is an homage to Shirley Jackson. Is it too early to say that issues #10, 11, and 12 will have a distinct Children of the Corn-vibe to them? 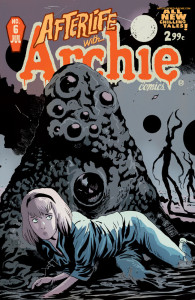 MSG: Coming up, you will be re-imaging Sabina the Teenage Witch in the style of your work on Afterlife. What can you tell me about your plan for Sabrina? Will it be in continuity with Afterlife or its own thing?

RAS: It will be its own thing. Sabrina’s story is epic, and the way I want to tell is completely different from what Francesco and I are doing in Afterlife. It just felt like, rather than trying to spin her out of the pages of Afterlife, why not build her and her mythology from the ground-up?

Also, it’s a period piece, so it couldn’t exist in the same universe as Afterlife, though I do think of them as sister-books. Companion books. In movie terms, if Afterlife is Evil Dead, then Sabrina is The Omen or Rosemary’s Baby. In comic terms, if Afterlife is Swamp Thing, then Sabrina is Sandman. (And I’m not putting myself at the same level as Alan Moore or Neil Gaiman, believe me. It’s just to show how the books might hopefully complement each other, and speak to each other, without treading the same exact ground.)

MSG: Any final thoughts or special teases for this week’s Afterlife with Archie #5 for the Comicosity audience?

RAS: The only thing I’ll tease is that up until now, Kevin Keller’s really been in the background in Afterlife. But in issue #5, he has my two favorite moments in the book. One with Reggie, the other with Ginger. Now that we’re up and running, expect more from him. And from the Ginger-Kevin pairing.

Afterlife with Archie #5 arrives in comic shops tomorrow, Wednesday, May 14. Check out our interview with the other half of the Afterlife team, Francesco Francavilla, as well!