Today we continue with our series of interviews discussing Eisner-nominated books from Oni Press. Ivy by Sarah Oleksyk is one of the most original creations of any of the nominated crop this year, an insightful and amazing look at a spirit young high school student, Ivy. Oleksyk recently took time to discuss where Ivy came from, what she is working on now, and how she found out about the nomination!

Aaron Long: I have to start this interview with big congratulations on the nomination! Do you remember where you were when you found out Ivy had been nominated for an Eisner? 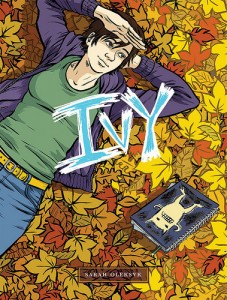 Sarah Oleksyk: Thank you! I had just gotten home from work and I saw I had several messages from my Oni Press editor, Charlie Chu. I called him back and he asked if I was sitting down. After I found out, the feeling of gratitude and happiness has stayed with me and I still get moments of “holy cow!” now and then.

AL: Can you discuss how Ivy came to be? Had the idea for the book been in your head for awhile?

SO: I kept a journal in high school because it was the first time in my life that things I considered “stories” were happening to me, and I wanted to chronicle them as they happened, in case I needed to go back later and remember. I started writing IVY from true-life events and then fictionalized them to make them more interesting to me to write, and hopefully to read for an audience. Coming from an auto-bio background, it was my first instinct to “keep it true,” but over time I’ve learned that a story can actually get richer in character and have a more profound effect if the author has the maneuverability to fictionalize the story’s events. I could bring in elements that underscore the point I was trying to make, and remove a lot of extraneous detail that didn’t add to the flow of the tale.

Once I understood the point of the book, the telling of it fell into place. I wasn’t quite sure how the story would end when I started it. I knew that I wanted to make this book so that the character of Ivy could exist, and she could add to the relatively small number of strong teenage female protagonists who aren’t all about boys and popularity. Her character took shape and the story progressed from there.

AL: Ivy is quite the spirited character, are parts of her based on anyone you know? 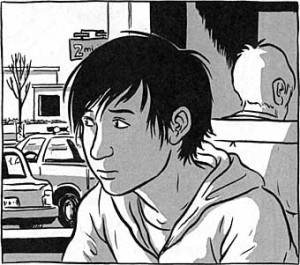 SO: Well, clearly there is much of my teenage self in Ivy, specifically her anger and impulsiveness, but also her drive and her unwillingness to bow to authority if it doesn’t make sense to her. I tried to take a hard look at the worse aspects of my own character and bring them to the forefront in her, to face them head-on instead of trying to cover them up. I’ve always been more fascinated with villains and anti-heroes and she is no exception. But she isn’t a 1:1 version of me either – I was much more passive and self-loathing in high school; I never would have run away. I had a few friends back then who did things that were probably just dumb teenage rebellion, but I admired them so much for having the courage to reject the easy path and try something out that hadn’t been proven to work, or be safe. I tried to add those characteristics to Ivy so I could put her in the plotline I wanted her to take. And as I said above, I wanted to write a character who wasn’t an idealization of who we wished we were in high school – someone that perhaps other teenage girls could read and feel that they understood, girls who don’t see themselves mirrored in a lot of popular culture.

AL: High school is over for Ivy, any chance readers will get a glimpse of her college life?

SO: Nah. I thought about a sequel but I don’t think the world needs another book about a 20-something trying to figure out who he/she is. 😉 I really just wanted this book to focus on one very specific turning point in a certain person’s life. I am blown away by people like Jaime Hernandez who can follow their characters through decades of stories and evolution, but I always knew this book would start and end in this one bit of time. And isn’t it more fun to imagine where she goes from here yourself?

AL: Any final words for Comicosity’s readers regarding Ivy or any other projects you are working on?

SO: I hope that comics readers develop a taste for challenging characters. It’s a trend in comics to have beautifully misunderstood protagonists who the reader can completely relate to, but I feel as though a story about someone you don’t quite understand, or even like, can teach you more about yourself and your relationship to others. It puts you in another person’s shoes and gives you perspective you might not have gotten. I’ve been writing the outline to my next graphic novel (though I have no idea when I’ll be able to work on it fully, since taking a job in animation), and if Ivy as a main character was challenging, Eugenia will be unbearable! But that point of friction and conflict is where the truth becomes visible. I gained many insights to myself and my past while writing Ivy, and I hope that came across to its readers. Hopefully the next book will teach me even more.