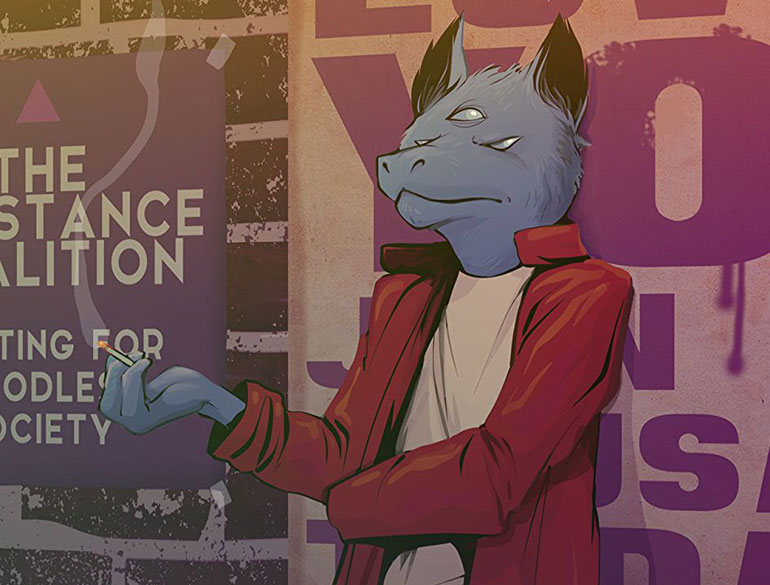 A little over a year ago, Comicker Press took their digital format creator-owned comics and ran a fantastic Kickstarter to get those stories bound and in the hands of the fans as books. Today, the publisher has diversified onto more platforms and is ready for Round Two, launching a Kickstarter to print five — count them! FIVE — of their series.

Comicker Press co-founder Sean E. Williams sat down with Comicosity for the big launch announcement, and shared a bit about what makes these titles — and the company as a whole — still pretty unique for the industry.

Matt Santori: Going into your second season Kickstarter, can you refresh the audience on where you’ve been and how Comicker Press came to be?

Sean E. Williams: You know, being a comic book creator myself, I’d been with enough publishers who either didn’t treat creators very well, or had really bad deals for creators, or some combination thereof. Looking at the scene, I thought to myself and said to my co-founder Saori Adams (whose husband is a comic book creator, too) that we could come up with a better deal and a better system to make creator-owned comics more viable.

One of the big things that I had been struggling with as a creator, and that I had seen other creators struggling with, was the time commitment and the financial pay-off to creator-owned comics. It’s a huge commitment, and especially with a monthly book of 20 pages, it’s hard for a lot of people. Maybe they’re doing a book for Marvel for the paycheck, so doing a creator-owned book is off the table completely. Or they have a day job, so doing 20 pages a month for a creator-owned series at Image is off the table.

We came up with this system that checked all the boxes for what we saw as needs for the creator-owned series of the 21st century. We have a relaxed schedule. We only require four pages a month. It’s a low commitment for a lot of creators.

And we have a lot of creators that actually do a lot more than that. Waking Life is actually putting out 16 pages a month. But it’s really whatever the creator is comfortable with. 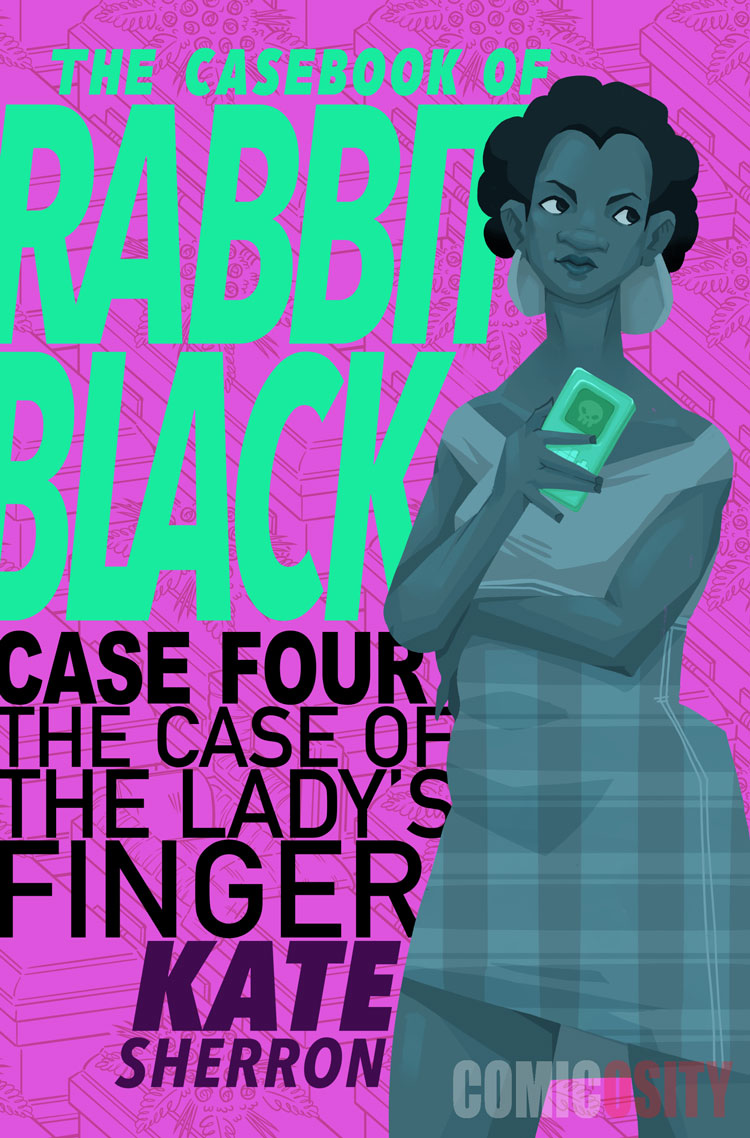 Then we really saw that only putting our books out on one platform wasn’t financially feasible either, so we expanded to Comixology, Drive Thru Comics, Kindle, and now Hoopla as well. So, we’re available to library card holders across North America.

Once creators have enough material out digitally, we collect them as trade paperbacks. When we founded the company, digital-first was really the only option for us. We were bankrolling ourselves and really couldn’t afford to put out print. Even monthly floppies were logistically above and beyond what we were capable of.

MS: Hence the Kickstarter you’ve launched this morning with a second round of new books. And one of the key tenets of your line, including what you’re offering today, is a self-professed focus on diversity.

SEW: Right. We launched with the creator in mind, but over the course of our first year, we realized that almost all of our series had some element of diversity in representation on the page or in the creators themselves. In looking at that, we thought, “This is something we really like and that the industry really needs.”

So rather than just moving forward hoping it happens, or waiting for it to happen, let’s commit to this and make the company diversity-focused.

With the last Kickstarter campaign, we launched that initiative, and stuck to it since. The stuff we see coming in is really unlike anything we’re seeing in the industry and again, by being creator-friendly in the first place, it really encourages diverse voices as well. 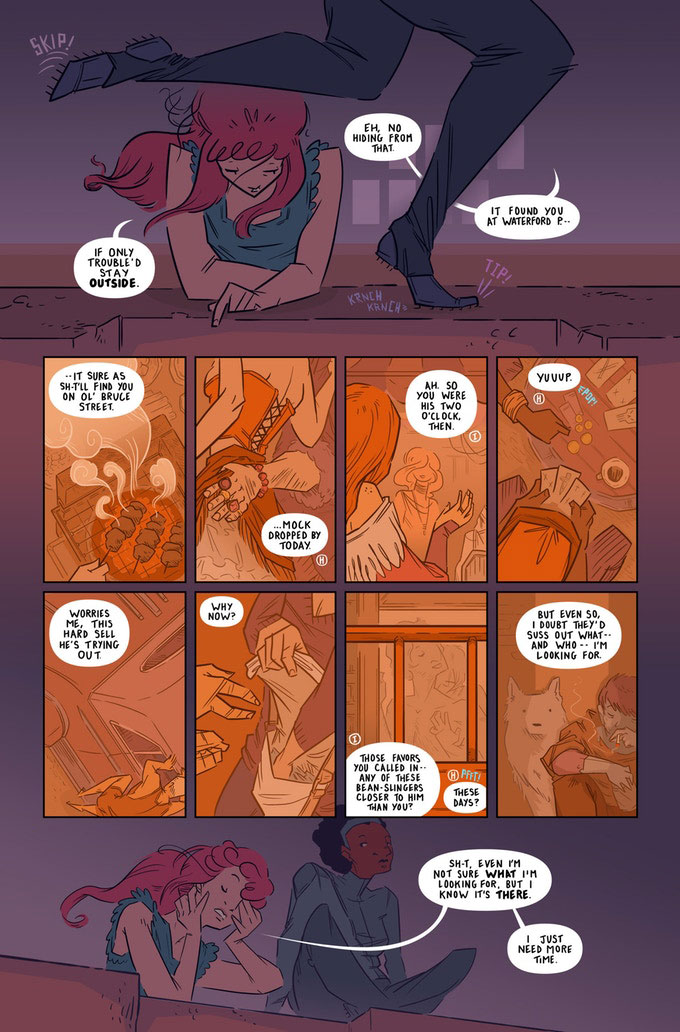 THE CASEBOOK OF RABBIT BLACK: VOLUME 2 by Kate Sherron

MS: So the first book you’re launching with the new Kickstarter is the continuation of one you launched in the original one last year.

SEW: Yes. The Casebook of Rabbit Black is about a private investigator who gets murdered on a case, but then is accidentally resurrected by the necromancer downstairs. At that point, the two are joined at the hip in solving his murder.

Whereas the first volume last year followed Rabbit and the necromancer Ira through two different cases, the second volume follows the women of The Casebook of Rabbit Black universe — essentially through the same timeline, but from a different perspective.

So what the creator Kate Sherron has really done is create this Pulp Fiction-like narrative that really expands the whole universe in a way that I didn’t see coming at all. 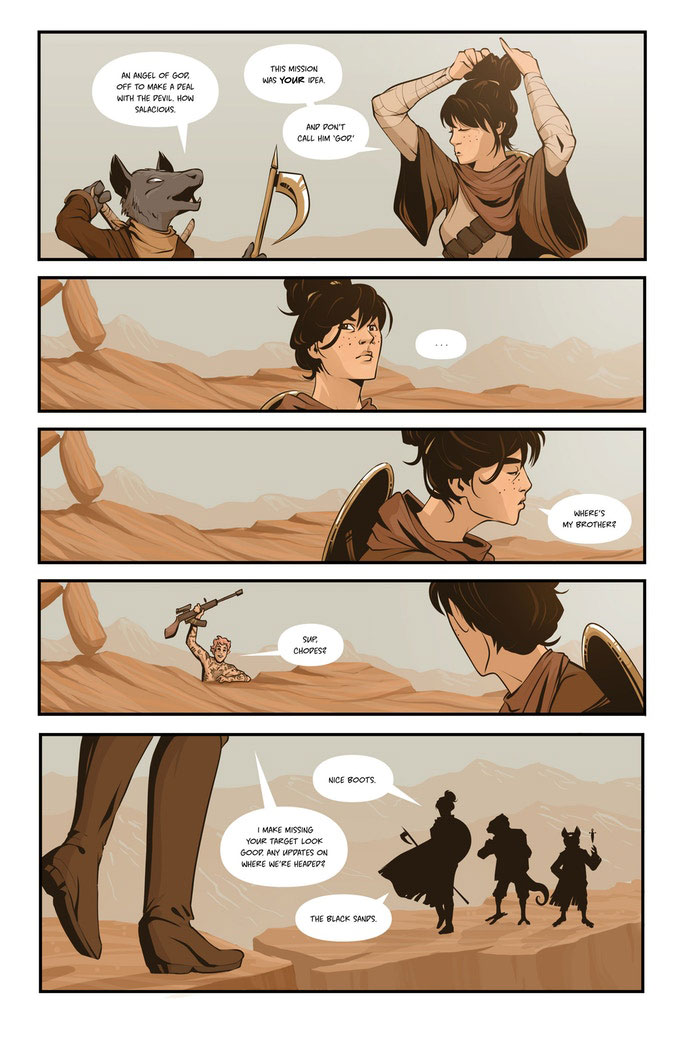 MS: The other four volumes are brand new to print, then.

SEW: Yeah. Chimera is an epic space opera with this band of misfits who are trying to survive in this intergalactic holy war that’s going on. They’re hired to steal an artifact that could win the war for whomever possesses it.

Over the course of the first arc, Tyler Ellis uses a series of flashbacks to show us who all these characters are and what their motivations are. Everything pays off brilliantly by the end of it, so it’s a complete, satisfying experience, but you can also see everything he’s setting up in the series to come. 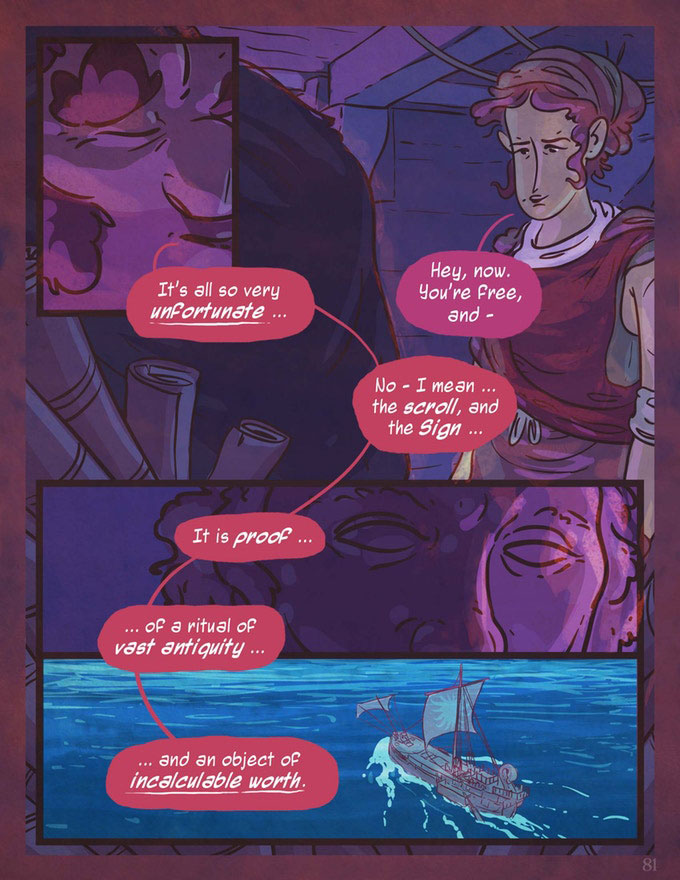 MS: It seems like it’s not just diverse character you’re working with here, but also genre diversity as well.

SEW: Exactly. Whereas Chimera is a sci-fi fantasy set way in the future, Kyrie is actually set back in the Roman and Persian empires. The one common thread in both series is that they center around groups of thieves. In Kyrie, they are going after this artifact that both the Roman and Persian empires are going after in negotiating a peace treaty. But the artifact actually wields a supernatural force whose origin goes back to the dawn of civilization.

So there’s a supernatural bent to Kyrie that really takes it beyond just being historical fiction. Matt Crotts gives it a twist that makes it special and unique. 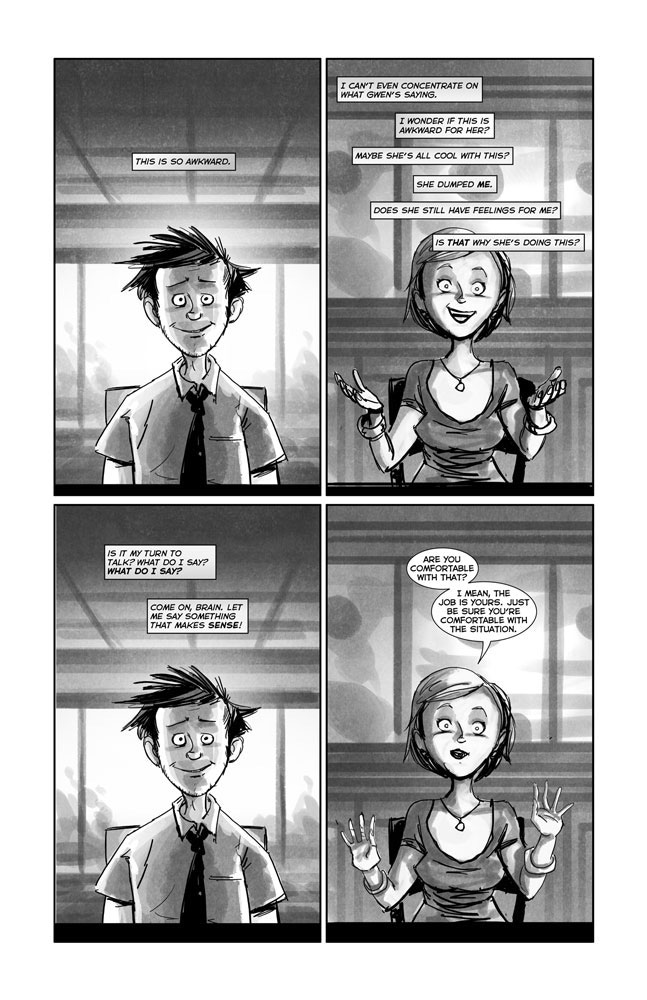 SOME KIND OF BLUE MOON written by Michael D. Stewart, art by Thomas Boatwright, and lettering by James Greatorex

MS: And you have a little bit of comedy here too…

SEW: Yeah, Some Kind of Blue Moon is a werewolf comedy. That alone is sometimes enough to entice people! [laughs]

The werewolf has this normal everyday life and a best friend who keeps an eye on him when he wolfs out. It’s about the two of them trying to survive holding a job, getting through college, and not getting killed. 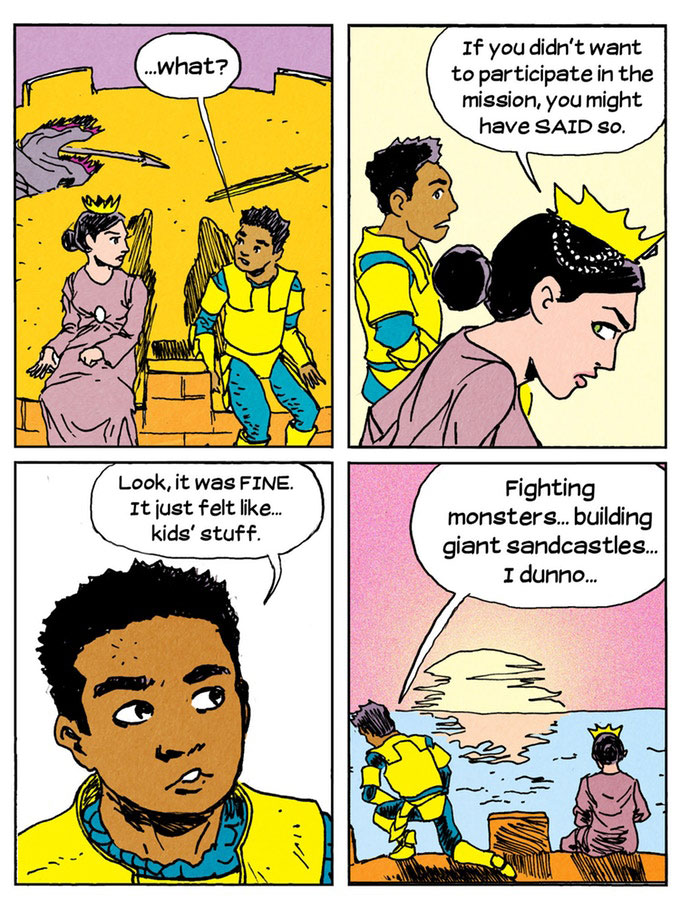 MS: And the last book for the Kickstarter is an all-ages adventure series…

SEW: Yep! Waking Life is about the princess of the dream realm in a very Windsor McKay/Little Nemo in Slumberland kind of universe. Her companion in the dream realm is a kid, but unfortunately for her, he’s grown up and now in high school.

He’s over having an imaginary friend as his best friend and she’s clearly not happy about that. So she decides to come into the real world to see what that’s all about. It’s this real “fish out of water” type of thing, coupled with just trying to survive high school — and all the hi-jinks that go along with both.

MS: Any special rewards or stretch goals this time around on the Kickstarter for these five books?

SEW: We have some target stretch goals that will allow us to do larger print runs on some of these runs, which means bigger royalty for the creators. It’s obviously something really important to us as a company.

But in terms of what backers can expect, we have a couple of surprises in mind, like we did with the first campaign. We’re also offering some special stuff in terms of creator commissions and signed and sketched bookplates. Those were really popular last time, and this is the only time you’ll be able to get those.

We’re also offering combo packs for people to buy, that will include free shipping. We can’t really offer that across the board, but for those backers who really go above and beyond, we want to offer that.

Some creators are offering large commissions in watercolor or digital ones — so that’s something special as well! Hopefully, everyone will find something that makes them happy and we can get these books into hands right away!

You can pledge to Comicker Press’s Season 2 Kickstarter for any (or all) of the above titles right here. The campaign lasts 30 days and has already been picked as one of Kickstarter’s “Projects We Love.”