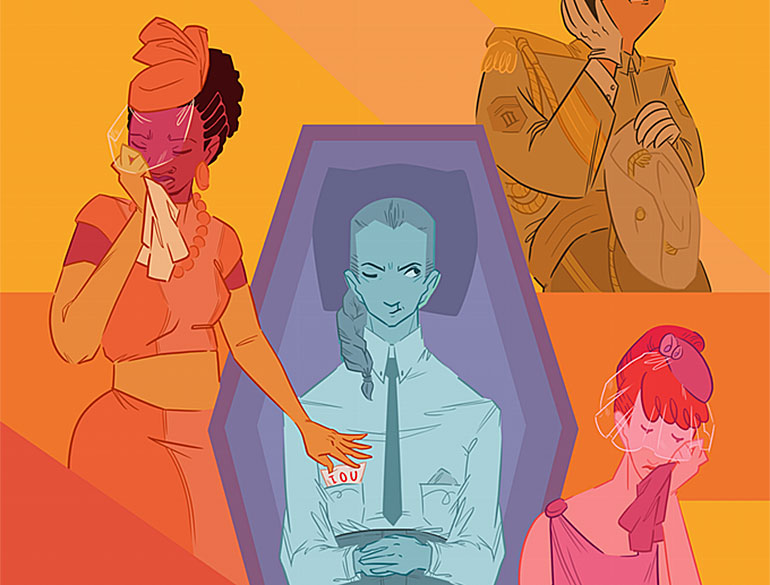 Comic fans are used to hearing about traditionally print-heavy publishers who are launching new, sparkly digital initiatives, but it’s pretty rare these days to hear about the opposite. With its digital app launch just shy of 3 months past, Comicker Digital is making another bold move — into print with the introduction of Comicker Press!

Co-founders Sean E. Williams and Saori Adams have launched their Kickstarter campaign just moments ago, devoted to bringing the first of many of their company’s digital comics to the collected printed page, starting with The Casebook of Rabbit Black by Kate Sherron and Lost Angels by David Accampo and Chris Anderson. Williams was on hand to share his thoughts on why the addition of a press label, what makes these two titles specials, and what fans can expect for their pledge. 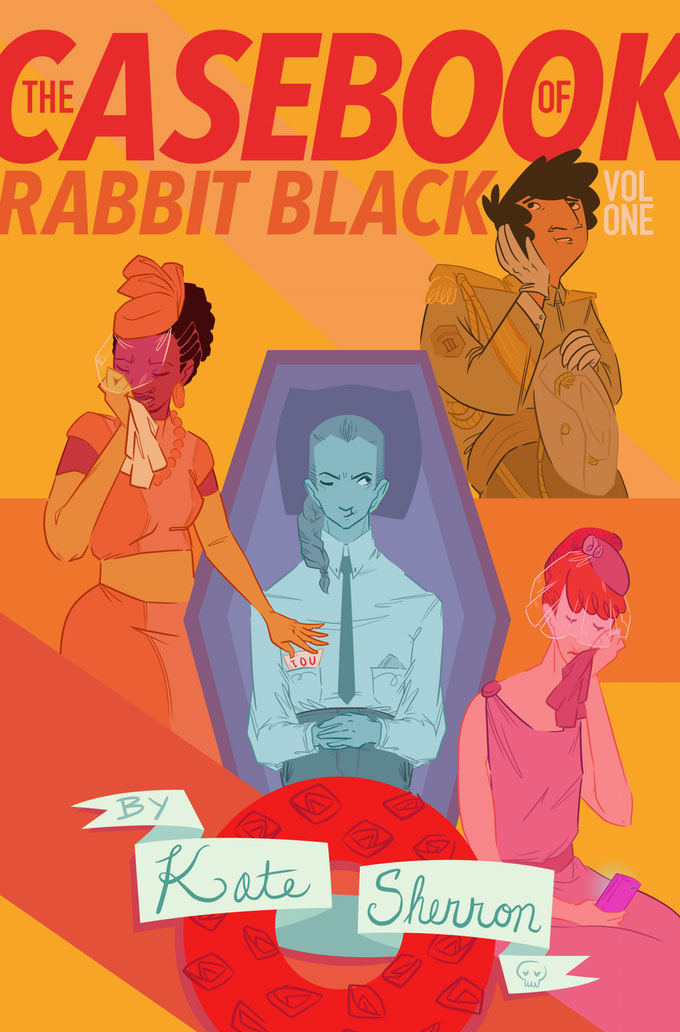 Matt Santori: Your Kickstarter opened up today with the first print offering from Comicker! Tell me about how a digital-first, creator-owned company comes to the decision to offer print options of its material.

Sean E. Williams: Part of it was when we conceived of Comicker, we knew we had to be digital-first because of the cost is so much lower than going straight to print. But going to print was always part of the plan. It was just a question of when we’d have enough material to collect. And we knew we wanted to do trade paperbacks and not break into the monthly market. Without the awareness and manpower internally to handle monthly books, it didn’t make sense to try that.

So, yeah! Doing collected trade paperbacks of the digital first material was the plan out of the gate, and the fact that we got here within a year of launching Comicker Digital is honestly faster than we expected, but we’re super happy about it.

MSG: How did you go about choosing the first two series to collect?

SEW: We left it up to the creators. As soon as they had enough material for a trade paperback, we wanted to put it out. And since both Lost Angels and The Casebook of Rabbit Black hit that mark at the same time drove us to doing the Kickstarter for both books. And then also bring Some Kind of Blue Moon to print if we can reach that stretch goal. 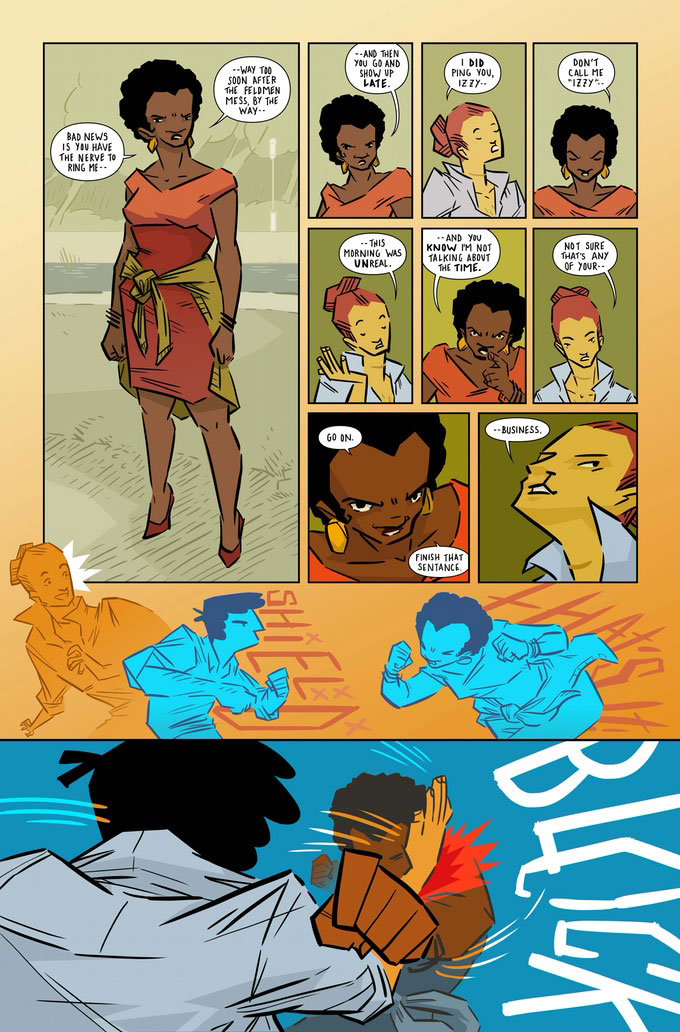 Interior art for “The Casebook of Rabbit Black”

MSG: Tell me a little bit about each book for readers that aren’t familiar with them.

SEW: The Casebook of Rabbit Black is written and illustrated by Kate Sherron. The basic premise is this freelance private investigator gets killed in his office. It just so happens that at the same time, the necromancer living downstairs messes up and accidentally reanimates Rabbit Black. So, as a revived corpse, he can now solve his own murder. It goes on to have them partner up and solve a national, potential embarrassment case they want to keep on the hush-hush.

Part of the reason they partner up is that because of how the spell worked, the necromancer can’t be more than a certain distance from Rabbit Black at any given time. It’s really this funny, buddy cop premise that’s really entertaining. And Kate’s art is phenomenal to look at. Every page is a masterpiece.

Lost Angels follows the main character, a girl named Alex, who is coming of age in a Los Angeles high school. It has this kind of relatable, everyday feel, with her surviving bullying and what not. The twist, of course, is that this city occupied by winged creatures that look strikingly similar to angels has crash-landed onto Santa Monica. So, the human culture and the angel culture are really thrown together in a way that comments on racial tensions in the world today, fitting in, and being true to yourself and your culture.

And it’s done in this really incredible visual way that isn’t heavy-handed at the same time. Lost Angels is written by David Accampo and illustrated by Chris Anderson. 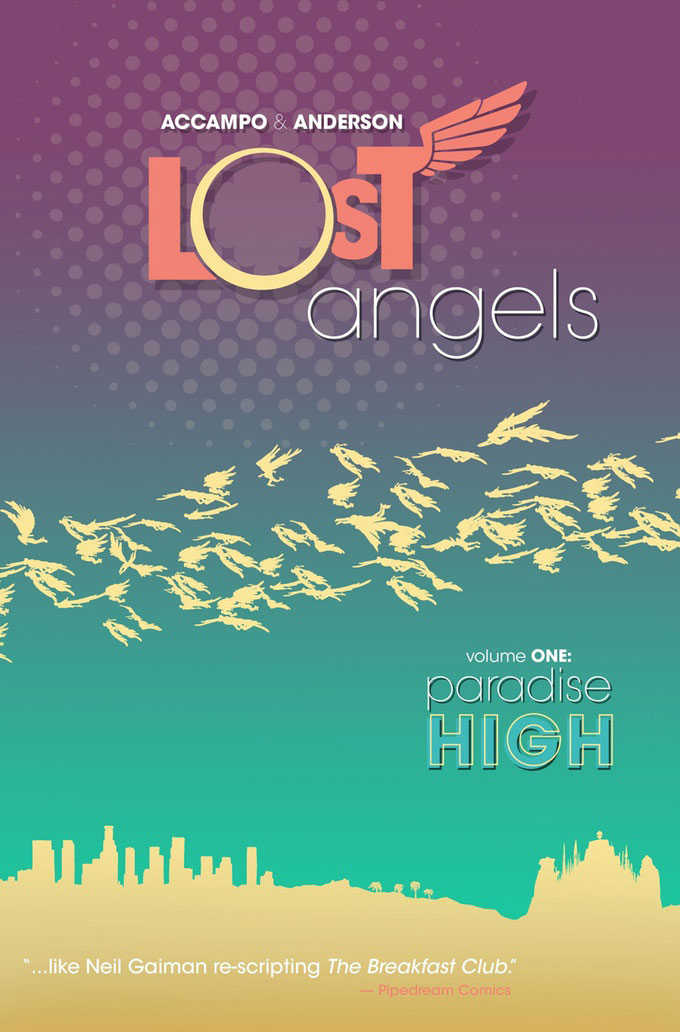 MSG: Your basic pledges look like they can get readers started for a very minimal amount, and include an exclusive mini-comic of each title?

SEW: Each of the creators is doing a mini-comic exclusive to this Kickstarter. The mini-comic is not required reading for the comic, but will definitely add to the experience for the folks who have already been reading the digital comics. That’s included in the digital tier and then is a bonus in every tier after that.

The PDF digital trades are only going to be available through the Kickstarter. We are not going to reissue them through Comixology or Kindle or anything like that. This is really people’s only chance to get those. Since the issues are out digitally already, we wanted to make sure we added something to that level that made it worthwhile to pick them up.

And of course, we’re offering the mini-comic and digital trade to anyone who gets the print trade paperback as well. The digital editions will have everything that’s in the physical trade paperbacks, like pin-ups and process discussions. 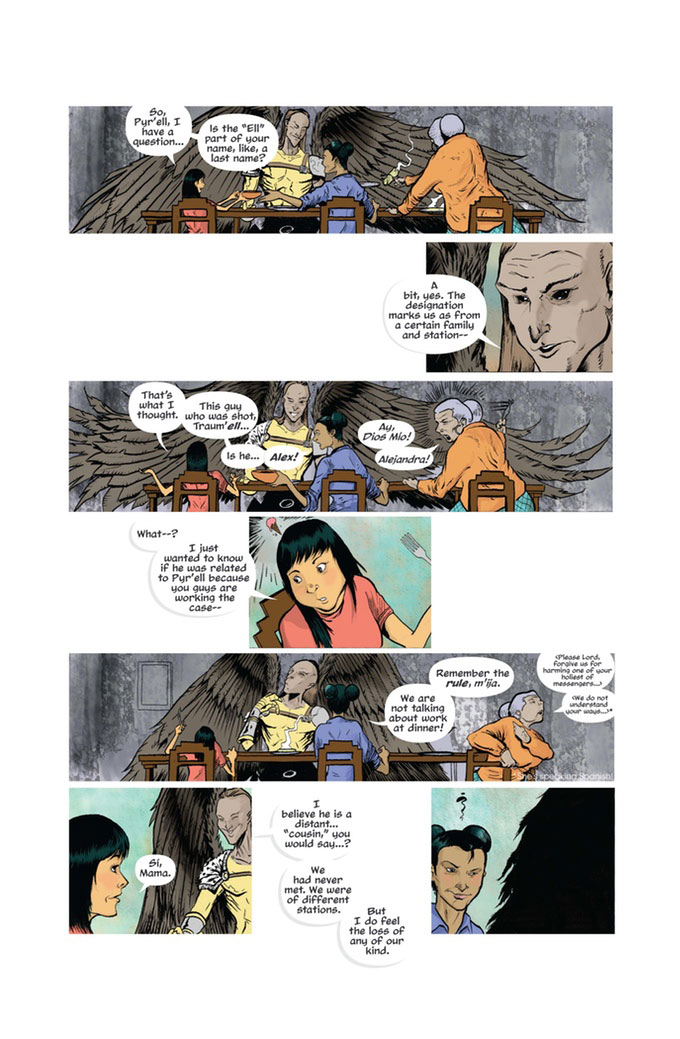 MSG: That’s a great incentive! And tell me about the potential stretch goals.

SEW: Since we were doing two books at once and our target out of the gate is a little higher than it would have been if we had done one book at first, the basic goal is just to get the books printed in a nice quality and get them out of the gate.

Beyond that, the first stretch goal is an upgrade to the books, getting thicker, heavier paper and do some UV spot gloss on the covers that make them shiny! Also with that tier, we’re going to throw in bookmarks that will feature a story written on them by Lost Angels writer David Accampo. And those will go to all backers, not just the Lost Angels backers.

Beyond that, the next stretch goal is to bring Some Kind of Blue Moon to print, which is already self-published by Michael Stewart, the writer. But it was a super-limited run, so we wanted to bring it back to print and put it out through the Comicker line. And Michael is pulling together some new artwork to include and illustrating a new cover as well. 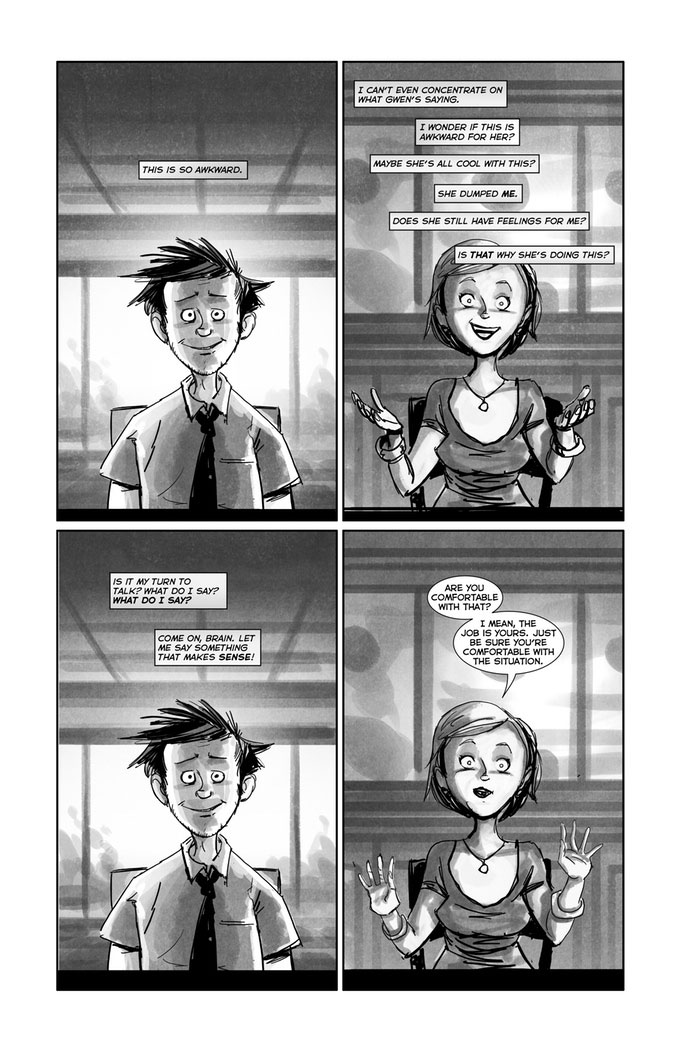 Interior art for “Some KInd of Blue Moon”

And if we can keep going, the Lost Angels guys wanted to do a hardcover upgrade with some extra material. We have some other stuff, including doing a larger print run so that it will be more profitable for creators.

MSG: Any final thoughts to get Comicosity fans excited about the Comicker Press Kickstarter?

SEW: The timing is interesting, I find. Last week, everyone was talking about how there were only four issues from mainstream comics companies written by women. You know what? Three out of our eight ongoing series right now are written by women.

Everyone wants diversity in comics, but what they don’t know is that it’s already out there. And by bringing our work to print, we’re hoping to show the world that there’s more out there than just the mainstream comics everyone looks to all the time.