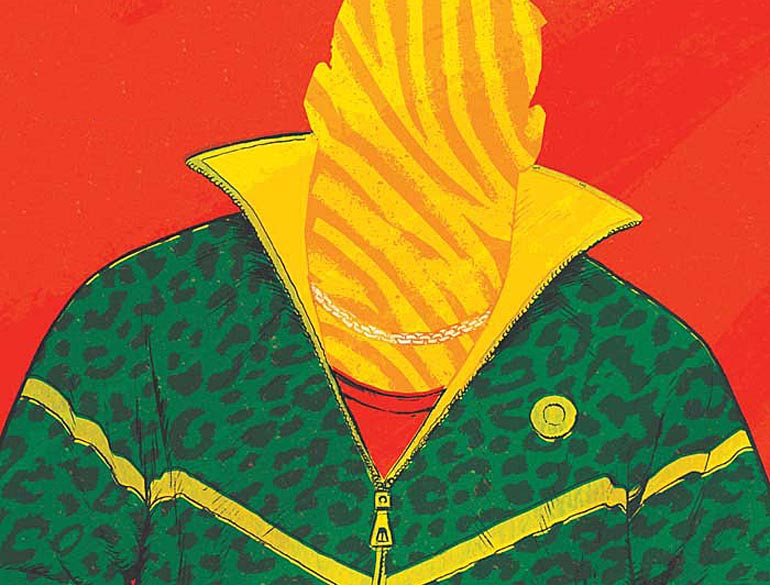 It’s the early 2000s. Ireland. Gangsters. Money. It’s Savage Town, a new OGN from Declan Shalvey and Philip Barrett that hits stores September 20, 2017. Shalvey and Barrett were kind enough to give us the dirt on Savage Town, the Celtic Tiger and just who Jimmy Savage is. 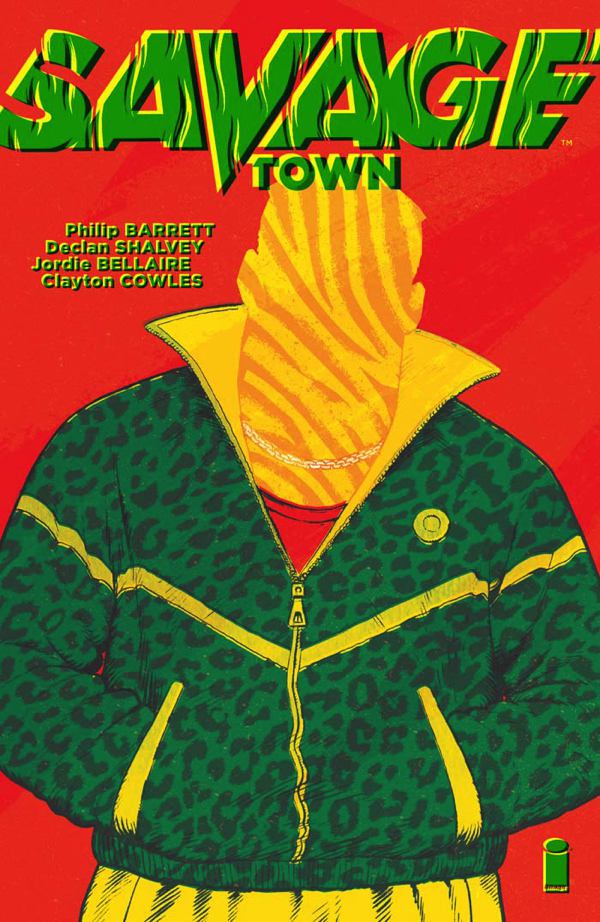 Aaron Long: So, how long have you been developing Savage Town?

Declan Shalvey: Off the top of my head I’d say 2 years? The first year being more research and preparing, with the second year being the bulk of the actual work. I’d known Phil for years but we’d never worked together. This is also Phil’s longest form project he’s worked on, so there was a lot of back and forth stretched out over that first year while we got our ducks in a row.

Philip Barrett: Since it was such a big project for me, I was really keen to get the look and feel along the right lines before diving in. There was a bit of wrestling with some of the character looks – particularly in the haircut department but I think the time we put in really paid off. Getting the location to feel right but without being too slavishly photo-referential was also really important – location is often the forgotten character and it certainly plays a big part in this story. 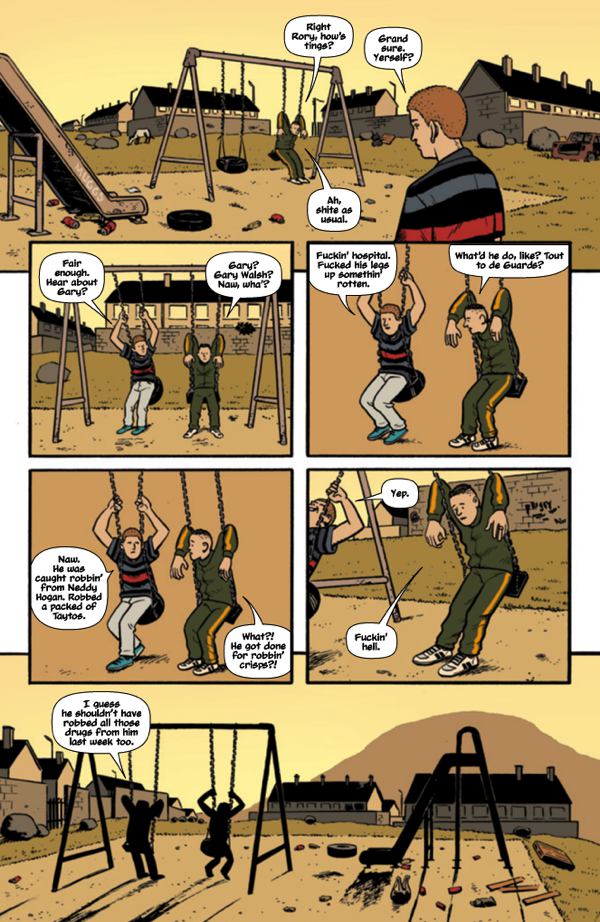 AL: Who is Jimmy Savage?

DS: Jimmy Savage is a small time gangster, runs a small crew in Limerick, Ireland. He’s married, has kids, but spends his days and nights mainly grafting for the next score. He has to do so all while not stepping on the toes of the much bigger gangs of the city, the Hogans and the Dawsons. He’s foul mouthed, rude and can have a bit of a temper, from time to time.

AL: Savage Town has been described as taking on the “Celtic Tiger”. Can you discuss this time period in Ireland and why this setting is critical to Savage Town?

DS: The Celtic Tiger was a term used to describe the unprecedented economic boom Ireland was experiencing during the 2000s. Ireland was riding wave of money, and with that brought housing estates, businesses and other development that was all really build on nothing. What it also brought was a lot of recreational spending, and Irish gangland made a lot of money bringing in drugs, etc to meet this new demand. As it relates to Savage Town, the story starts at the beginning of the Celtic Tiger, and we see Jimmy rise in a similar fashion to it. 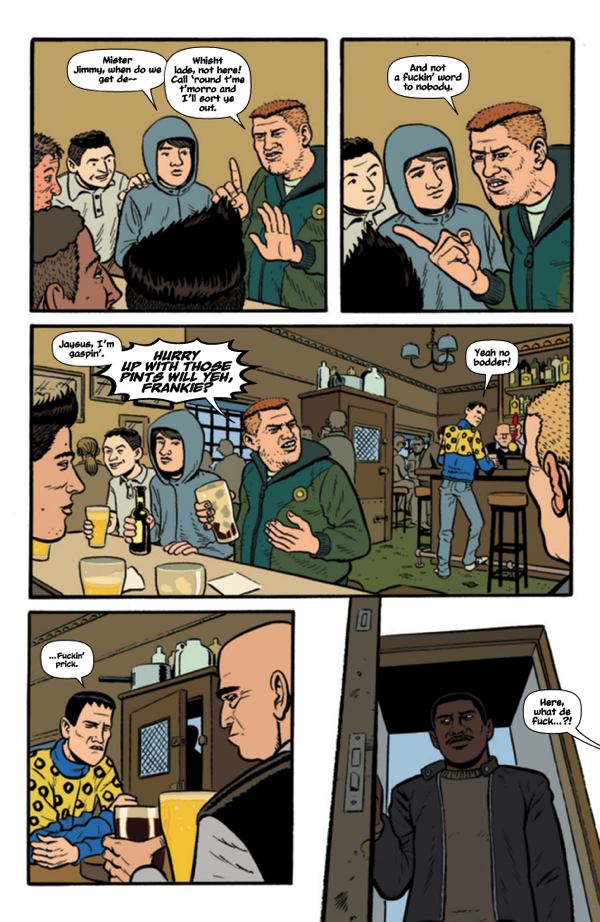 AL: Does developing an OGN instead of monthly issues affect your storytelling approach?

DS: Yes and no. I pretty much structured it episodically, but since it’s an OGN it gave us the opportunity to move things around for pacing, or tweaking a story point earlier in the book when something had been worked out differently later on. Mainly, it was a much less-stressful way of working, as we had one release date, one cover, one solicit, etc. Doing a story in the monthly format brings a lot of extra wok along with it, so doing it the way we did was less stressful and creatively more open to change.

PB: Doing the story as an OGN allowed us to be a little more organic about developing the story. Characters originally placed in there as background extras ended up getting speaking parts and locations took on lives of their own.

AL: Philip, can you discuss your inspirations for the design of Savage Town? What aspects of Ireland in the mid-90s to 2000s were critical for you to showcase in the art of Savage Town?

PB: In terms of the setting I wanted to showcase the lived-in, historical aspect of the setting and get across the grunginess of a place that is at the tail-end of a downturn. I spent alot of time trying to track down decent reference material – it was just before mass-uptake of the internet so there really isn’t as much period accurate online photos available. Older irish movies were a big help – for example Accelerator from 1999 and the underrated Fatal Deviation from 1998. Weirdly and fortunately the clothing styles were a little easier to track down as the look is undergoing a bit of a renaissance at the moment – I ended up with a large folder filled specifically of tracksuit references! 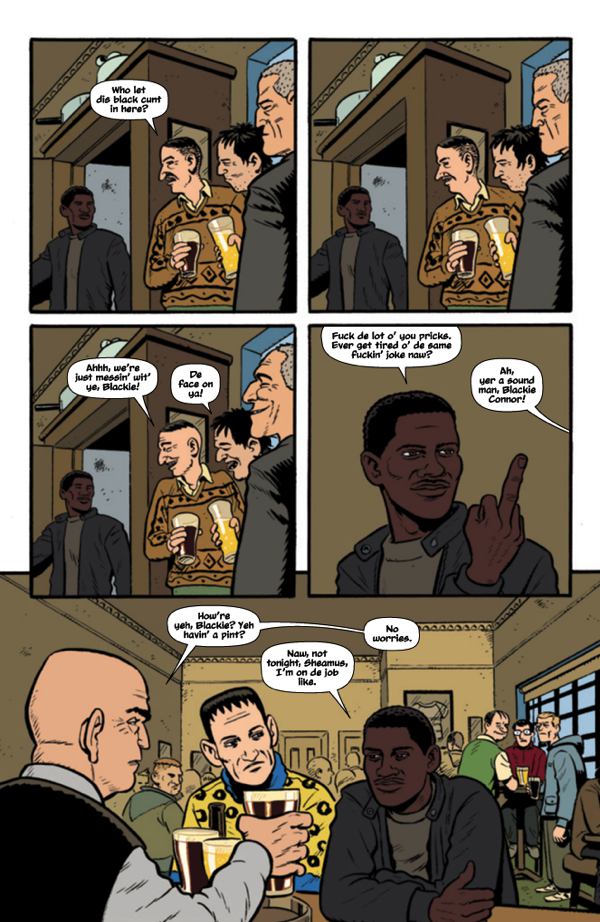 AL: Declan, you’re well known for kicking ass in the art side of the comics equation, how does the work you’ve done as an artist affect your writing process?

DS: Well I feel like I know how to write in a way that’s less awkward for an artist. Because I’ve a decent understanding of how to tell a story visually, I more know what-not-to-do. I also knew to give him space to add more of himself to the page as he always made them better when he did. Some of my favourite parts of the book were what Phil added. I felt bad at times, as I drew a lot of scenes in cars and they’re tough to draw, but at the same time, I knew how to construct the scene panel to panel that were would be easier for Phil to compose visually. Whenever I gave him a scene that would be a bit harder for him to draw, I’d try give him something a bit easier elsewhere. There’s a misconception that ‘comics don’t have a budget’ but they do. The budget isn’t money though, it’s TIME. If I know Phil is going to spend longer on one sequence because I’ve asked him to draw something more complex/tasking, I’ll make sure he can spend less time on another page by making it much easier to do.

PB: I really lucked out getting to work with Declan – he immediately understands the problems that can be hard to get across to a writer i.e. who speaks first in a scene can really mess up the speech balloon locations. Also there were quite a few points when reviewing the thumbnails Declan was able to suggest clearer or more economical ways of getting the point across. As a master storyteller himself, Declan is a real artists writer.

DS: I really do think if anyone picks up the book, they’ll enjoy it. I wanted to make something that was a bit more appealing to the everyday reader, someone who reads crime fiction of enjoys drama/comedies. This is a book I wanted to read, and I think others would really like it too, given the chance.

Savage Town is available from Image Comics on September 20, 2017.