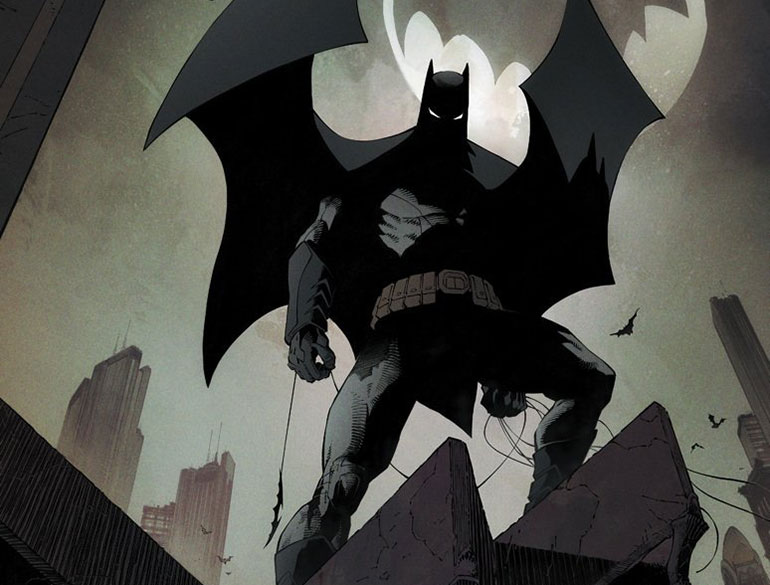 Five years ago, when the New 52 was launched, we had no idea what we were in for. Fifty issues later, last team standing Scott Snyder and Greg Capullo have produced an epic run on DC’s top title, Batman, and excitement has never let up. In the first part of a two-part interview, Capullo and Snyder sit down with Comicosity in the shadow of C2E2 2016 to talk about their five year run, where they took the character, and how it all culminates in Batman #50 this Wednesday. 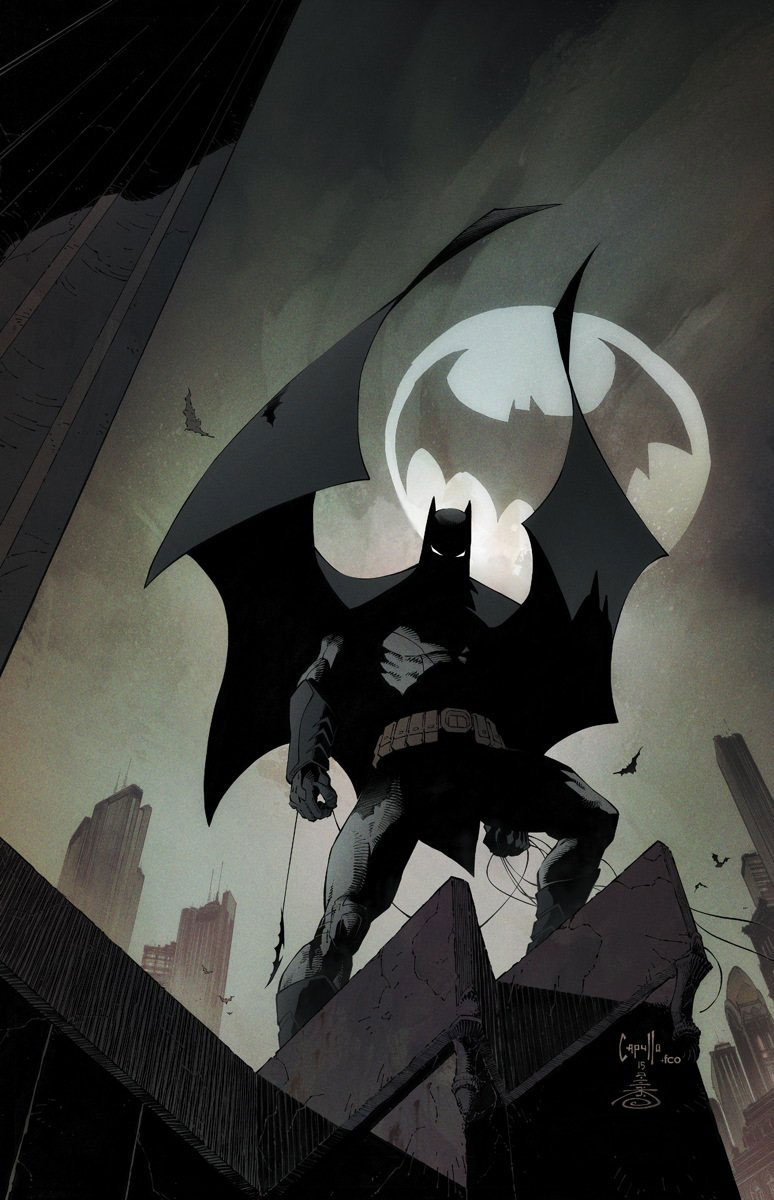 Matt Santori: I want to start off just by making a comment: you two gentlemen are, by far, the longest running, uninterrupted collaboration at DC since 2011’s relaunch. What does that mean to you personally?

Greg Capullo: For me, it was one of the prerequisites for signing up. I didn’t want to be switched around with a bunch of other guys. It was like, if I’m signing up to do Batman with Scott Snyder, I want to do Batman with Scott Snyder. I went in with the intention of not working with anyone else. Not that anyone else isn’t a great writer, but I wanted to work with Scott. And that’s the way it was going to stay.

Scott Snyder: That’s really how I felt too. I remember there were moments right after “Court of Owls” that I got a sense of how special our relationship was and how much I was learning. I just remember thinking even then that there was no one I could work with over Greg — ever on anything — that could beat that.

It’s crazy to think like that, because you say that about our collaboration, but I don’t think it’s even registered with me that it’s been so long. We’ve just been going and going. It’s starting to hit me more now that we’re going to be taking a break for each of us to start our new projects. But the fact of the matter is, Greg is one of my best friends in the world and is like a big brother to me. I know we’re going to be working on stuff together long into the future.

Even though I’m going to miss him tremendously, I can’t wait to see what he’s going to do with Mark [Millar]. And what I know about the project makes me think it’s going to be FANTASTIC. So, I’m really thrilled. 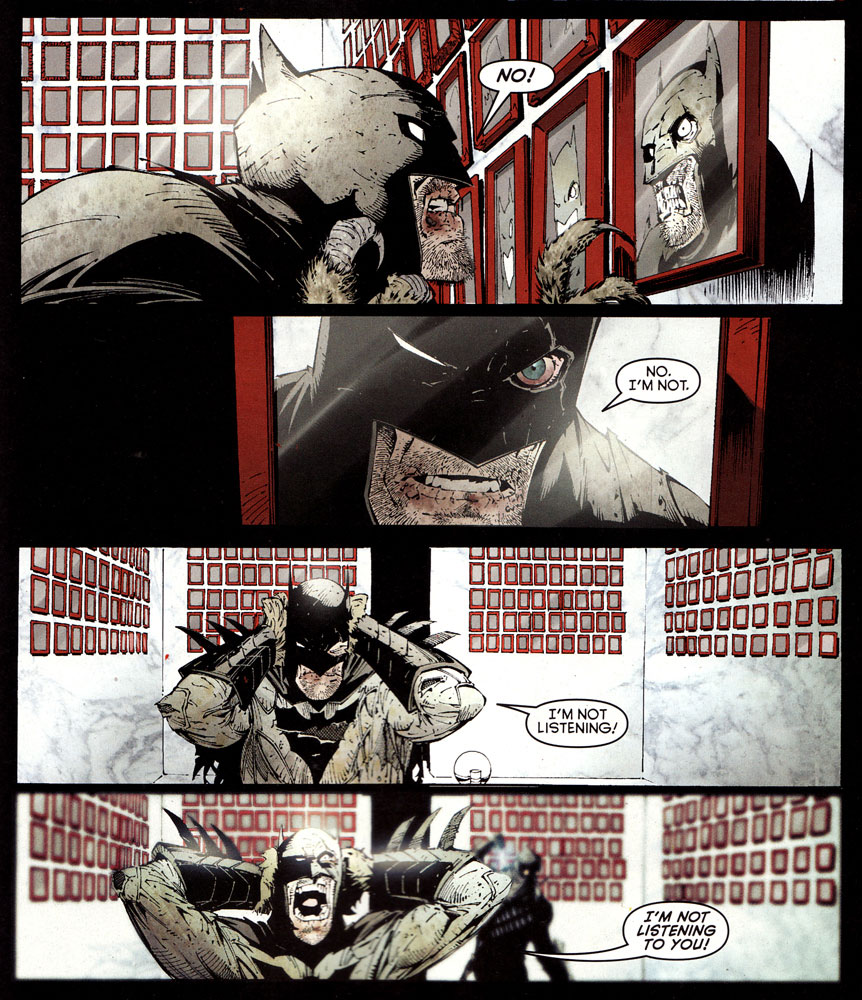 MSG: Looking back at your entire run, what do you feel is your essential take on Batman? Like, if you had to narrow it down to an elevator pitch retroactively, what would it be?

SS: Honestly, the thing I’m proudest of is that there was point early on that I realized our Batman would feel different to me than Batman before. I became interested in making him a symbol of bravery, rather than a symbol of intimidation. When I was a kid, he was really much more about scaring bad guys back into the shadows. Gotham was very much like the city I grew up in: there was a lot of crime, a lot of bankruptcy, a lot of corruption. A lot of fear about it all falling apart.

Today, I think we’ve become a much more global and national community, where the fears in a place like New York or Gotham are bigger and broader, and have to do with terrorism, guns, resource depletion, race, class, and all kinds of stuff that become part of a larger conversation. They’re not really things that Batman can scare back into the shadows. He can’t fight them in ways that are literal.

What we tried to do is make Batman a symbol of inspiration and bravery in a post-9/11 world, rather than someone who is about scaring bad guys. He’s more about inspiring good people to become the heroes they can be. He inspires us to save ourselves and each other, rather than saving us from real world threats. 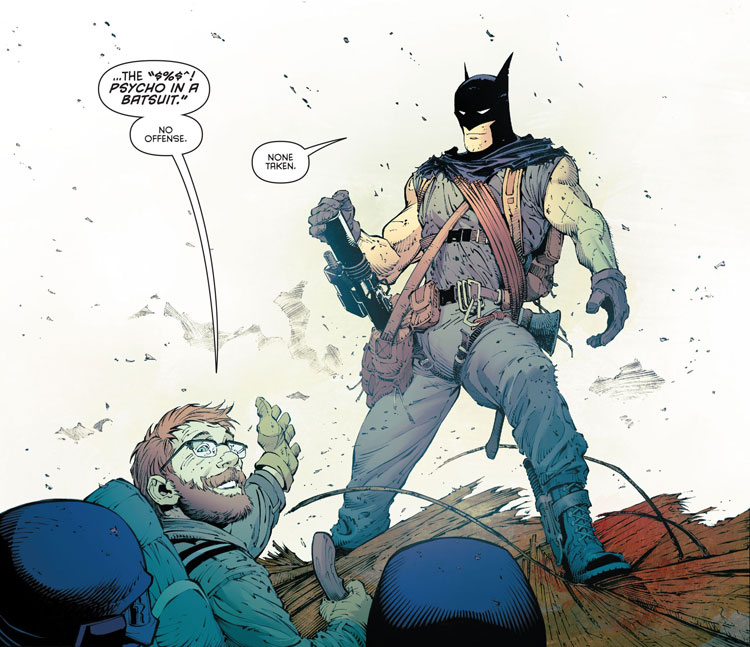 MSG: That thought really comes to a head with the conclusion of “SuperHeavy” in issue #50. At the start of the arc, you faced a lot of skepticism about the shift you made. Now, 10 issues later, how do you think the arc fulfills that mission statement?

GC: I think we succeeded. From the moment Scott told me the idea, I was for it. Yes, we met with a lot of resistance, because Bruce is Batman. But we knew from day one that we were going to bring him back. I always liked the idea of how this would forever change Gordon’s relationship with Bruce when Bruce comes back. Having walked a mile in his shoes would change everything for me, if I was Jim.

I think we accomplished everything we set out to do in telling a strong story that changed the characters going forward. Every story should bring some kind of change. In that regard, I think it was a success. And reaction from the fans and their support really bears that out. 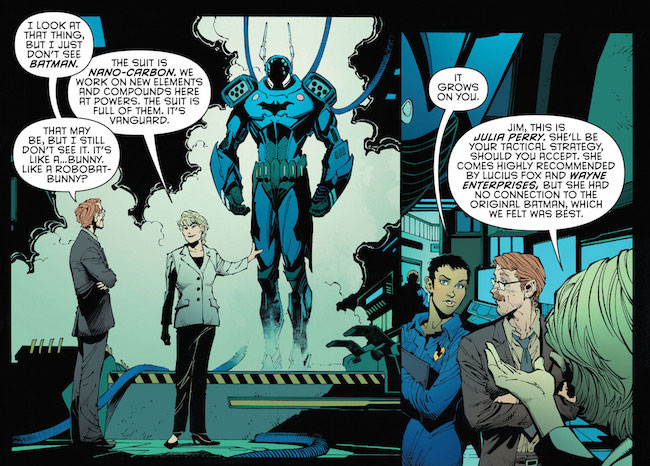 SS: I was pretty sure going in that this would be our “Nebraska” album, or just something that would push a lot of people away. Like, it may not be for everyone. And I remember being on the phone lots of time with Greg and being concerned.

SS: I kept warning the editorial team that there might be massive attrition in sales on his arc, but that this was going to be one of our best things creatively.

For me, it’s hard to choose any favorite arc of our Batman run, because they’re all like children in a way. I obviously have moments in each one that has some great meaning for me, but this one might be my favorite. It was a risk we took, and something radically different for Batman that hadn’t been done before. The fact that the book maintained [direct market] sales over 100,000 for the entire time we did this story is phenomenal. I never expected that.

I told DC and Greg and everybody, “Hey, I’m fully prepared to drop 25% on this stuff. Are you guys ok with that?” over and over. Like, “I understand this will not sell as well as the Joker and that stuff.” But the fact that it’s stayed that high means the world to me — not for sales reasons, or commercial reasons, but because the fans really stayed with us.

And by the third issue — where it became clear Bruce was a central part of the story, and that Jim had this cool Batsuit underneath, that Bloom was a villain that really meant something — everyone was really on board with us. We didn’t really get a lot of criticism after that point at all. 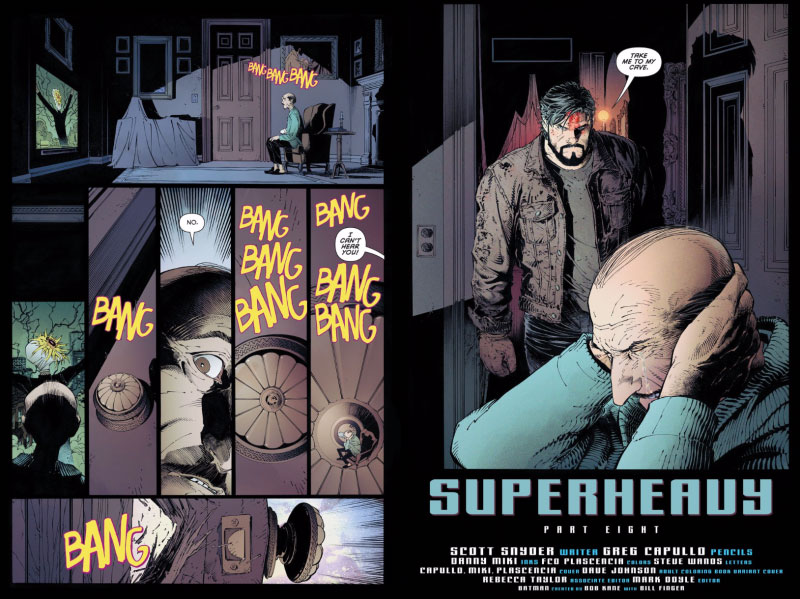 You know, that meant the world to me, and I’ll never forget it. It was hugely inspiring to have that kind of fan support on a story this risky. It’s a tremendous amount of generosity we got from them that really, I’ll never forget. I was figuring people would be yelling at us for ten months, but it stopped. And they were truly supportive.

And that’s why Batman #50 is meant to be this culmination, like “Here’s every fun, crazy thing from new costumes, to Batman faster and stronger than ever, to Jim Gordon with a super-conductive metal bat ray, to Kaijus.” It’s meant to be a big thank you.

Arriving in stores this Wednesday, the extra-sized Batman #50 completes the “SuperHeavy” arc. And once you read it, come back Wednesday for a spoiler-filled Part 2 of our interview with Scott and Greg!