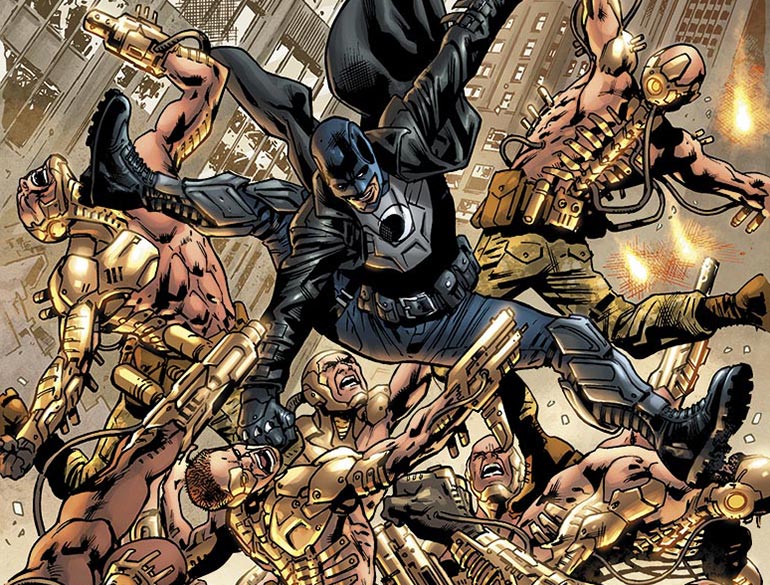 It’s a pretty rare thing (so far) to hit the comic stands and see a gay man in a titled role, but DC Comics is about to change that with the June launch of Midnighter #1. Previewed in last week’s set of 8-page prologues released by DC, Midnighter is being helmed by writer Steve Orlando (Virgil, Undertow). Steve sat down with us after his appearance on The Hangout to share a little of what the character means to him, what we can expect from Midnighter’s single life, and the place violence has in the title. 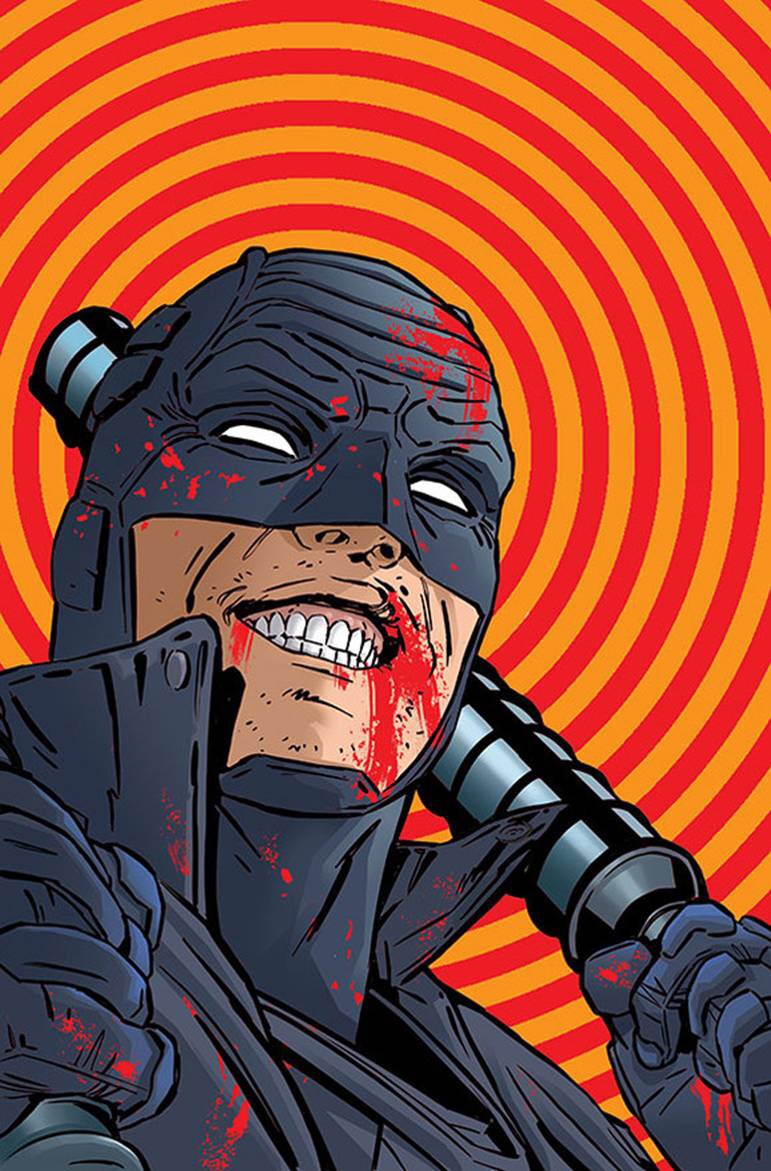 Cover to Midnighter #1 by ACO

Matt Santori: Steve, thanks so much for taking time to talk Midnighter! You’ve said that Warren Ellis’s original take on the character had an impact on you as a young man. Can you talk a little bit about that?

Steve Orlando: Absolutely! Debuting in 1998, when I was thirteen, Midnighter immediately broke stereotypes for a young Steve that largely was taking his cues about the queer community from television and media. Regardless of sexuality we are bombarded at that age, and at all times really, with messages about societal expectations, about WHO and WHAT we SHOULD be.

And along came Midnighter, in this weird proactive version of the Justice League that I read about in Wizard Magazine called the Authority, and he did care what people expected him to be. He was a confident, powerful gay man unwilling to be anything but himself – and of course himself happened to be a sadistic vigilante with a glee for creative justice, but the point was he showed me that there was no one way to be queer.

And that message has resonated through my life, it’s still an important message today. We need only be true to ourselves, not what others expect of us, and seeing this imposing gay male character that demanded and received the respect of the Gods around him changed my own outlook going forward.

MSG: Midnighter stands alone in the comic market at this time as the only solo title featuring a gay man in the lead. What’s your vision for Midnighter’s place in the DC Universe in general, as well as among other gay characters in comics?

Cover to Midnighter #2 by ACO.

SO: In the DCU, Midnighter is a symbol for victimizers and abusers that have stepped into another plane of misdeed. When they see him, when they see the coat and the cowl, they knew that this is not a beat down from Batman or fisticuffs with the Flash. They’ve fallen into the underworld, and Midnighter is their guide. Midnighter doesn’t kill wantonly, but he does kill, and it stems from the ever teetering balance between his caring and his anger.

I see him as a character that cares aggressively about people, but his response when you hurt people is just as potent. He’s a man of extremes, trying to rectify his poles within his everyday life. And along the way he’s doing incredible things that even other heroes see and they say “damn, that was cool.”

And as for gay characters in comics, I hope for him to be a symbol of confidence. The conflict of being in the closet, feelings of doubt about one’s sexuality or gender, these are all legitimate and viable struggles we face. But Midnighter is a symbol for overcoming those things. He’s a man who refuses to compromise himself, to be 100% himself at all times and in all ways. There is never a hidden part of Midnighter, there’s never a moment when he’s not Midnighter, and that openness, that honesty, is something I think we would all like a bit more of. So despite his dark beginnings as a produce of mad science, he grows into a symbol of hope and confidence. Midnighter loves who he is.

MSG: You’ve made a point about how important it is that Midnighter is a single man. Can you speak to the rationale behind this shift? 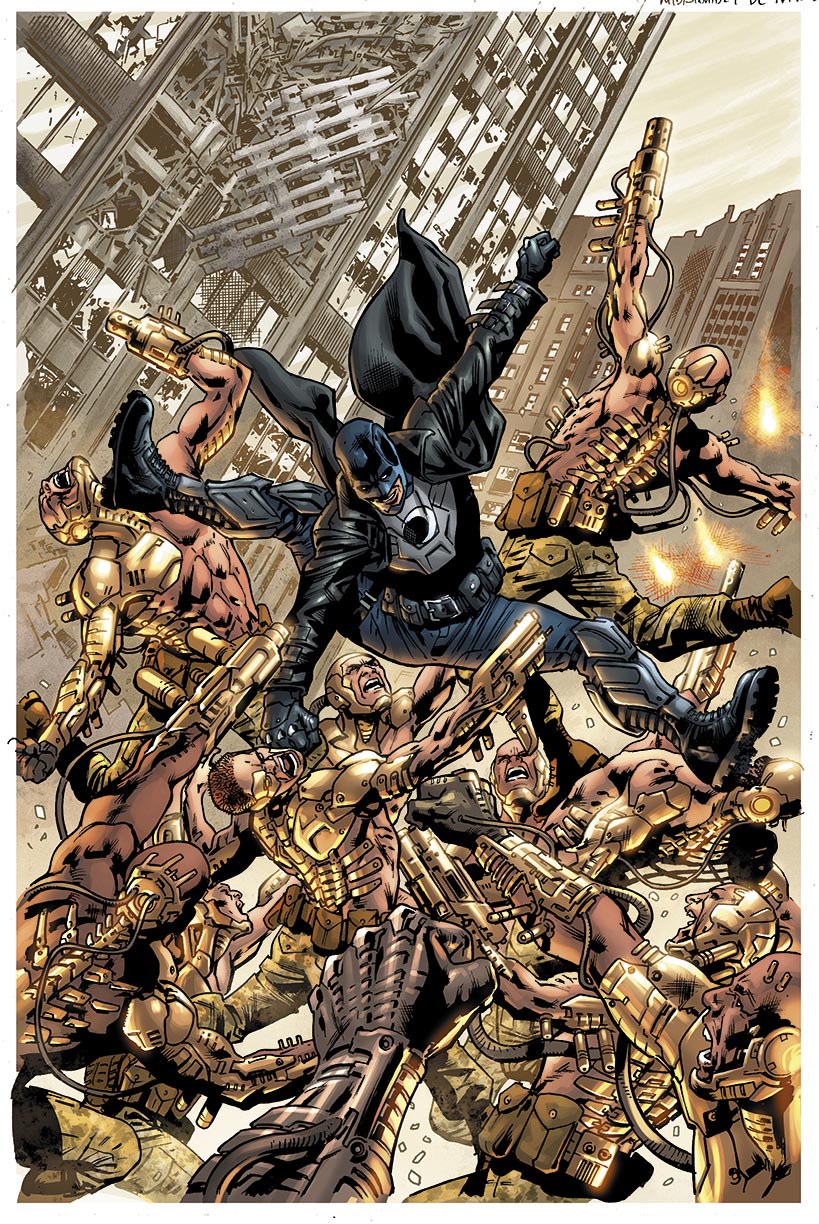 SO: To me this was important from the start, due to the tendency in media to chasten its depictions of gay male sexuality. We all love Apollo, and he will play a role in the book that is evolving. But Midnighter is a character with teeth, and his depiction had to have that as well. Single is not important so much as watching him through his romantic life. This doesn’t mean there’ll be a new guy every issue. But it means we will take a different approach from the off screen romances or sexless marriages or unions we often see for gay men in mainstream media.

We will show Midnighter being an active adult gay male – he has no shame in it, nor do we, and its something wonderful. And it’s positive, I am just as confident about male sexuality as Midnighter is in the book – we have to believe if we’re going to talk about HIM believing it. So it’s about taking back male sexuality not as a thing obscene or to defame, but something to celebrate with confidence and passion.

MSG: There’s a uniqueness to Midnighter’s skill and power set that sets him apart from Batman and Grayson. How do you imagine he “works” and what ways do you find that being expressed in the scripting process?

SO: Midnighter is a fighter, and I think that’s key to the character. It’s his best and worst quality – if he perceives something as a fight, he can see how to win it. But not everything IS a fight or SHOULD be a fight, and so it also becomes reflected in his mannerism in other parts of his life. In an instant, he can play out a fight a million different ways and see the way through.

When it comes to scripting, it’s a great opportunity to dig into the intimidation and speechwork the character is known for, but it’s also an exciting notion to dig into when we consider how it resonates through his life. That being said, it’s also an interesting dynamic between someone who has trained to be the best (Batman), who is a “natural” (Grayson), and who has been engineered to be the best (Midnighter). It’s a great point counterpoint countercounterpoint. 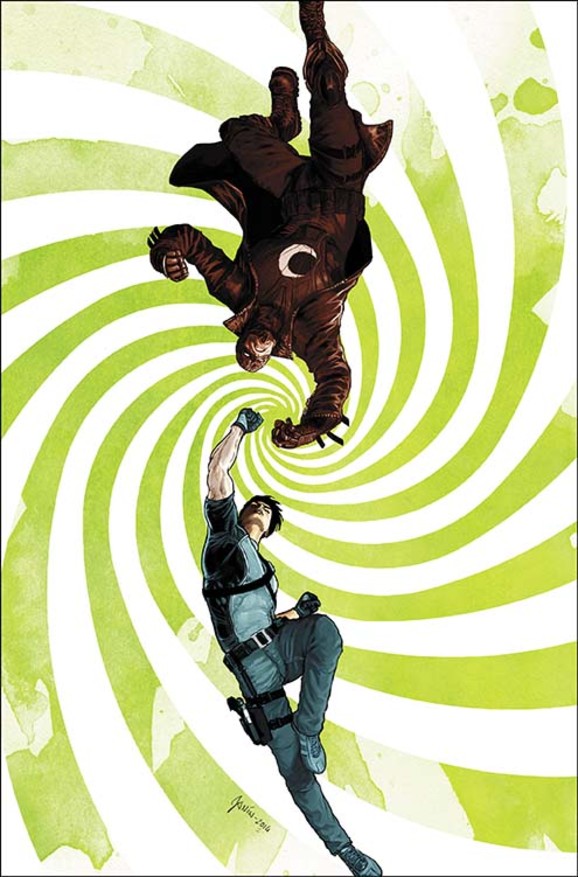 MSG: Right away, we see Midnighter operating as an agent to… something. What can you tell us about the overarching structure of the series in terms of Midnighter’s employ and external motivation?

SO: Midnighter is at last working for himself! When we left him in Grayson, he was walking out of the God Garden. Now he is establishing his OWN Network, as we saw in the preview, of people who he has helped. Much like the Shadow, who he was based off of, Midnighter has a community aspect to his character. If you’re saved by his mission you become part of his mission. And having eyes and ears all over the world allows him to respond to threats quicker, and with a greater breadth than before. He’s gone to ground, but he has roots stretching across the planet.

As we begin his ongoing series, there has been a theft from the God Garden. All of the Sequester, the Gardener’s cache of the worst black science has to offer, has been stolen and is being disseminated into the world. It’s not Midnighter’s mess, but he is cleaning it up anyway. Why? Because the Gardener is family, and he may not like her, but she still created him. And the last thing Midnighter wants is to have someone else fall victim to the dark side of science the way he did. Nothing would hurt him more.

MSG: Midnighter’s origins go back to a concept of ultra-violence that was prevelant in the early 2000s. How do you think that premise has aged and what’s your take on its place as a writer?

SO: I think violence means something different today than it did when Midnighter debuted, without question. It can’t not, since the world is always changing. When it comes to Midnighter, I think it’s important to address it in his in-story perception. HE knows he would never hurt a normal person, but even in “Perdition Pistol” we see that he is sometimes saving people despite their fear of him. He was engineered for violence, he knows he has this itch, but he has found a way to make it work and to help people with it. 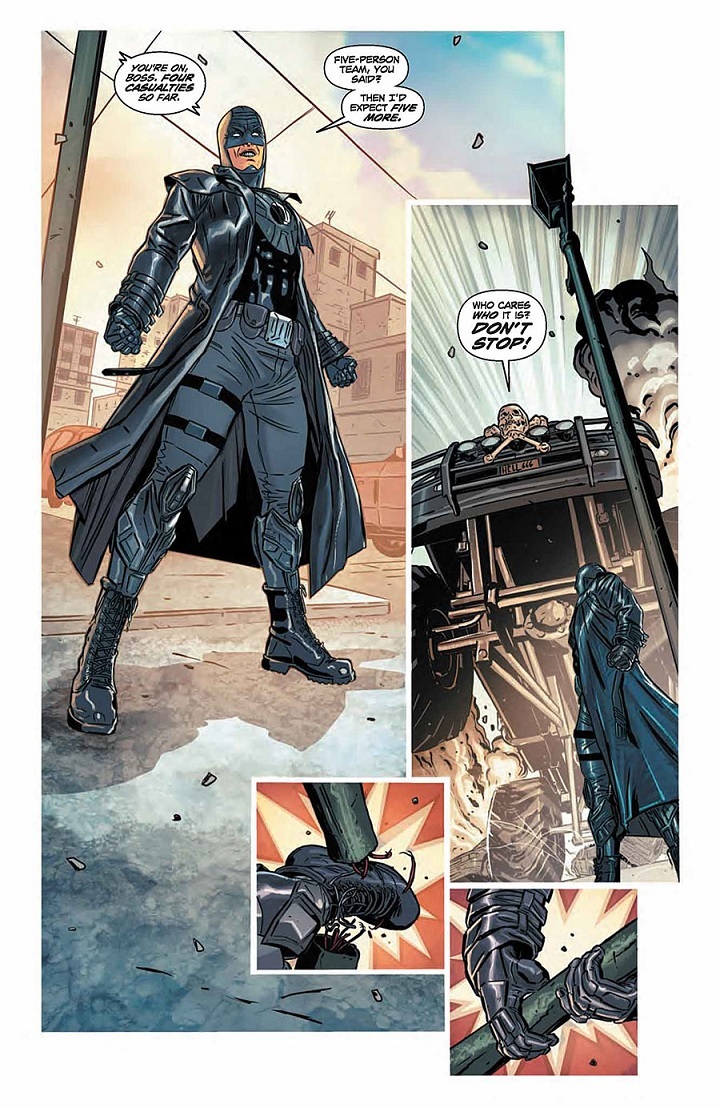 There is a cynic mayhem inherent to Midnighter that allows us a lens just outside of reality or “reality.”He’s not the Punisher, he is not a sad man, he’s a man dealt a shit hand by his creators who has found a way to change the game he’s playing. And not all normal people can handle him, but not everyone can’t. We are embracing comic book and crazy fiction concepts and never looking back, playing by action movie rules, and hoping people come along for the ride.

MSG: Artist ACO made a big splash right away with the 8-page preview story. How closely are you two working in breaking down the story page and what do you think he brings to the book that’s unique?

SO: ACO is an AMAZING artist that has made Midnighter more than I ever could have imagined. We are in contact whenever he has questions, or wants to experiment, and I am always one to get out of his way because all the new things he wants to try on the page are incredible. ACO is ready to bust out, not just with this 8-pager, but as issue #1 hits he has just created a layout and linework style so energetic and so vibrant that it will shock people. He is just putting an amazing amount of work and love into each page so that Midnighter will not look like any other book out there. And I’m a smart man, so I smile and let him run wild.

MSG: Any final thoughts or special teases about the upcoming Midnighter #1 you can share? Can we expect to see guest appearances by any DC Universe men in Midnighter’s boudoir?

SO: Stay tuned for DCU men, we will have to see!

BUT I will say I am incredibly passionate about Midnighter and establishing his unique, independent role in the DCU. And starting with issue #1 we will aim to do just that. I don’t let myself turn in an issue of Midnighter unless there is at least one moment of just insane action movie badassery. And he jousted a car in the SNEAK PEEK, so all I can say is it only gets more nuts from there.

Words for issue #1? STEAK and STANDOFF.

Midnighter #1 debuts June 3, 2015 from DC Comics. If you just can’t wait, however, the 8-page prologue “Pistols of Perdition” appears in Convergence: Nightwing and Oracle #2, as well as for free online at Comixology.com.