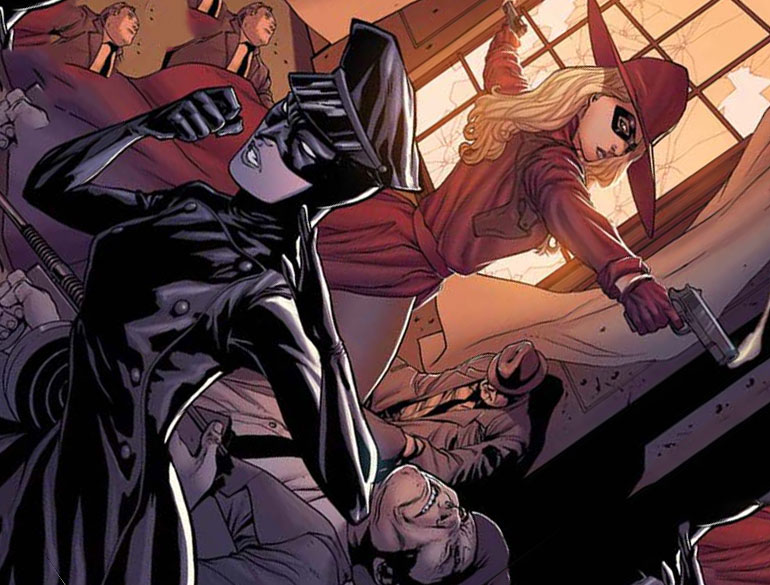 In just two weeks, Gail Simone’s big Dynamite crossover special, Swords of Sorrows kicks off. She has gathered together a vast array of female writers from seasoned, to new, to tell the stories of the women of the Dynamite universe as they never have before. Besides focusing on the female heroes and villains Dynamite has published, there has been a conscious effort to bring in female writers for characters who have only ever been written by male characters. We continue Comicosity’s exploration these books by talking to the writers of this groundbreaking event.

The ladies of the blade, the gun, and the sweet rides are teaming up for several tie-ins to the Swords of Sorrow series. While Swords of Sorrow: Chaos! focused on the women with hellish abilities, this group of heroes all have honed skills and human resourcefulness to save the day. The wicked typing skills behind these ladies of fighting acumen is the writer of Revenge: The Secret Origin of Emily Thorne OGN, M3, and The Unauthorized Biography of Winston Churchill: Erica Schultz. I got a chance to ask Erica about what it is like crafting stories for women with such special talents. However, before we dive in, just who are these classic 1940’s styled characters searching out the truth in Swords of Sorrow:Lady Zorro & Black Sparrow Special and Swords of Sorrow: Masquerade/Kato Special? 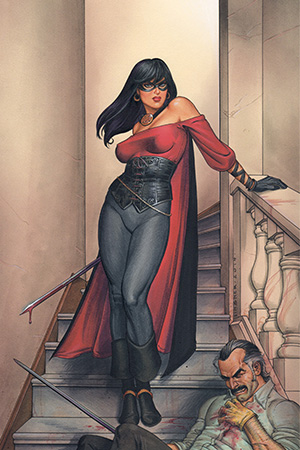 Stealthy, quick witted and skilled with a swords, Lady Zorro was originally fueled by vengeance after the death of her husband. 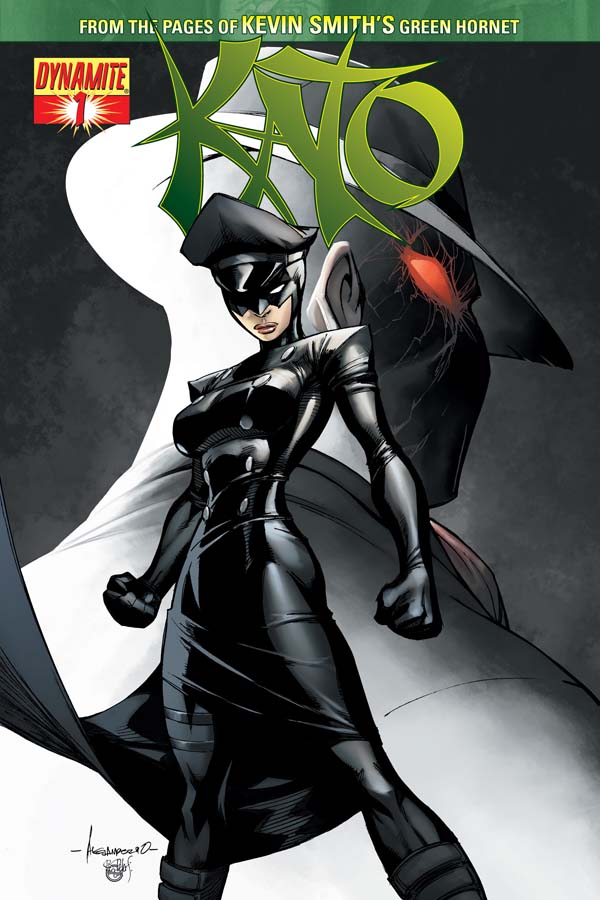 Mulan Kato has been interpreted in many ways over the years, but this daughter of the original Green Hornet Kato has always a skilled fighter. 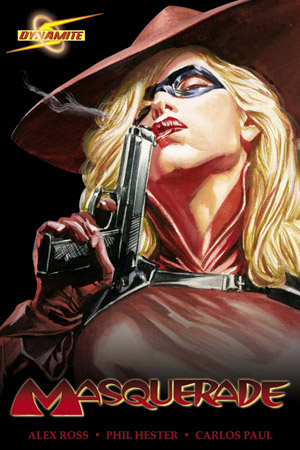 A socialite who decided to fight crime first appeared in Nedor Comics’ Exciting Comics #51 (September 1946). Her abilities include cunning and skill with a gun. 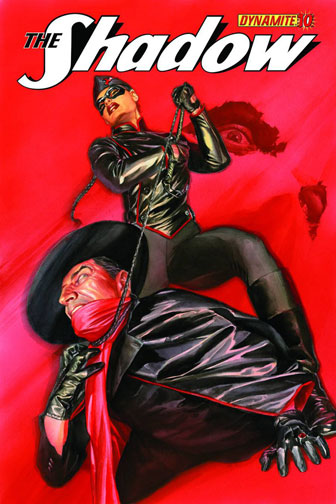 Major Esmeralda Aguilar faced off against The Shadow during the Spanish Civil War. Now this international burglar has become a hero in her own right.

Jessica Boyd: Erica, right now you’ve gotten a chance to sink your teeth into four rather diverse characters in the pulp adventure universe of Dynamite: Masquerade, Kato, Lady Zorro and Black Sparrow.  Did you get the opportunity to pick the pairings or were surprised by what you were given to play with?

Erica Schultz: When I was first brought on, I didn’t know if we would be able to choose. I researched Lady Zorro and Miss Fury, but Gail and Dynamite sat down and looked at everyone’s strengths (the writers AND the characters) and put together these pairings that really work. I did get Lady Zorro, though. (WIN!)

Was I surprised? First of all, I was surprised that Gail Simone even knew who I was. She could have given me Toilet Girl and Scrub Brush and I would’ve written my heart out on it. That said, I do like the ladies assigned to me. It was a lot of fun to write some more kick ass ladies.

JB:In your first month book, Masquerade/Kato, is this Kato the same daughter that would later become the Crimson Wasp or another variation?

ES: I’m not SUPER familiar with Crimson Wasp, but this Kato is Mulan Kato, daughter of the original Kato who was partners with The Green Hornet. This Kato is Kevin Smith’s reboot character. 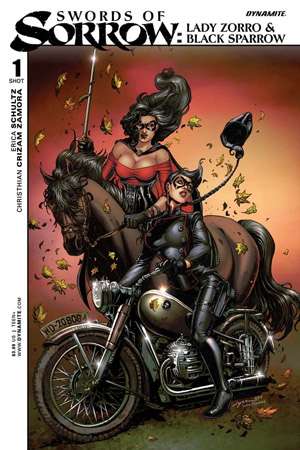 JB:  You’re pairing up a set of heroes from vastly different generations. Masquerade has been around in some form or variation since 1946, while some form of a daughter of Kato has been around since 1989. Do you work in any of these time period differences between them?

ES: Since these portals not only traverse space, but time, we’ve moved these ladies all over the place. After Project Superheroes, Masquerade is in the present, so she’s fighting crime in a future time (points for recognizing the reference). That said, Kato still has the “criminal persona” going, and Masquerade is a crime fighter, so you see how the two of them would converge. Willow and I do take them out of their respective times and out of their comfort zones.

JB: Does the possession connect back to the main heartbroken villain in Swords of Sorrow, or is that merely the event that throws Masquerade and Kato together?

ES: I don’t want to spoil anything, but the possessor of the car is tied to the main series, definitely. All these women are being challenged by the Prince and more or less distracted by his minions so he can reach his ultimate goal.

JB: So is Masquerade a car girl or is she going to be baffled by battling Kato’s possessed Black Beauty?

ES: It’s funny, having spent 70+ years in Pandora’s Urn has made Masquerade a bit emotionally immune to things like possession. She herself has the ability to possess another individual, though not an object like a car. If anything, Kato, who is much more rooted in the real world, is the one thrown for a loop.

JB: In your second month book, Lady Zorro/Black Sparrow, it seems like both ladies are thrown out of their natural time period to fight Prince’s Shards of Chaos. What does a prehistoric setting allow you to do with pulp characters that normally hit the streets or ride through the desert saving the people?

ES: It’s all about the comfort zone. Both of these ladies are incredibly intelligent and resourceful when they know what they’re up against. Therein lies the fun. Neither of these characters have fought in this time period, and they’re thrown off and put through their paces. It can’t be too easy…where’s the fun in that?

Also, putting them in a prehistoric setting really hits home the fact that we’re doing pulp. These stories are supposed to be fantastical and have people swinging from trees and fighting dinosaurs. Tarzan and Doc Savage ain’t got nothin’ on these gals.

JB: Lady Zorro is very much of the people while Black Sparrow works in the shadows. Was it difficult to determine how to get these two personalities to meld into a team?

ES: Originally I approached it as two women from Spanish origins. After Gail’s first reading of the script, she said I could go deeper and really punch the gut with it, so I gave them a connection that really helped cement their union. 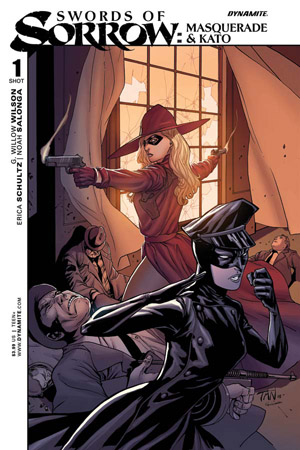 JB: All these heroes you are tackling were created as counterparts to their male forerunners (Kato, Zorro & The Shadow.) In the last year or so other creators have worked to give them more command and performance. How are you building on that through the Swords of Sorrow series?

ES: I don’t know if Masquerade originally had a male counterpart, as she was originally just a gumshoe detective, but I see what you’re saying.

This crossover has a lot of responsibilities, and if it were a person, I’d be giving it a hug and saying, “YOU CAN DO THIS!” It shows that female creators can write fun, adventurous pulp stories that appeal to a wide audience. It shows that female pulp characters can star in their own books without the need to bring in a male character. It shows that these big crossover events aren’t limited to The Big Two. Dynamite has done a fantastic job of promoting this event, and it’s worth every tweet and Facebook post.

JB: What is one thing you’d like for readers to know who have never tried pulp adventure stories or have not given them a shot due to their “cheesecake” reputation or covers?

ES: This crossover is pushing the boundaries of pulp. Pulp will always have cheesecake roots, but we’ve grown from that. This is not your mama’s pulp stories. They’re fun, sexy, dangerous, and every one has a pair of ladies who will kick your keister from here to Kingdom Come.

JB: Is there anything else you’d like our Comicosity readers to know?

ES: This is an unprecedented group of women brought together to write these stories. Honestly, to be a part of it is humbling, to say the least. When people read these stories, I hope they go out and buy the other books we’re all written, be it indie or for other publishers.

Also, we’re talking a lot about the writers (who are FAB, I mean, COME ON!), but the artists involved are fantastic, too. Silvio Davila, Mirko Andolfo, Noah Salonga, and Dave Acosta are the first month’s heavy hitters. The art is beautiful. Tula Lotay’s covers are divine. This is really a whole event to behold. 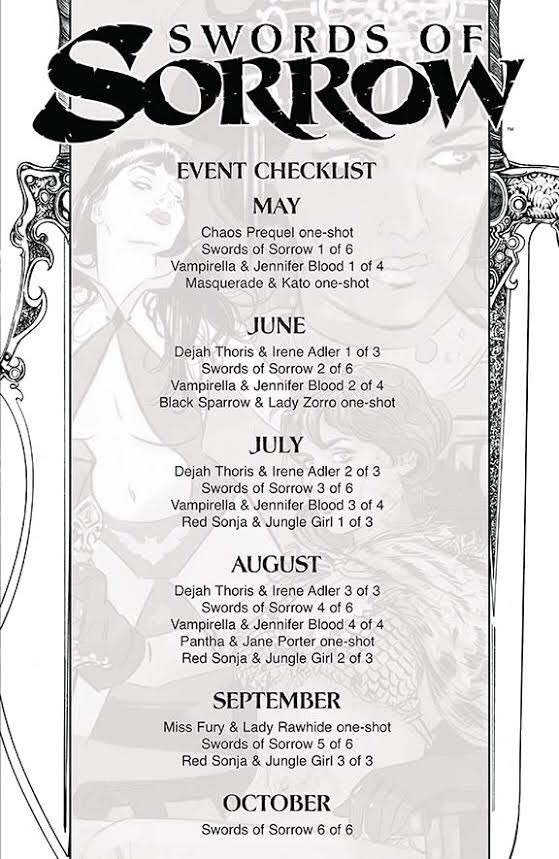