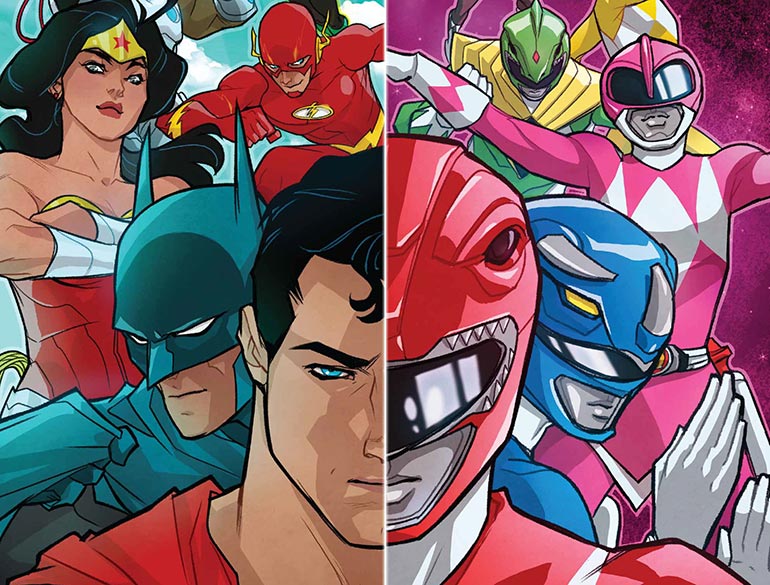 One is a group of the World’s Greatest Super-Heroes. One is a group of teenagers who are chosen to be their world’s most powerful protectors. Hard to believe they haven’t met before now, but writer Tom Taylor and artist Stephen Byrne are fixing that right now with this week’s debut of Justice League/Mighty Morphin Power Rangers #1. The creative team sat down with Comicosity to discuss the two teams, how they came to know and love the Power Rangers, and what fans can expect as the series gets going.

Matt Santori: I want to start off by asking both of you, what was your background with the Mighty Morphin Power Rangers before taking on this series?

Stephen Byrne: I was fascinated with the Rangers since I was a little kid. When I was eight years old, I would draw all my own Power Ranger comics, like 60 pages of them or something. It was a non-stop barrage of my own monsters versus the Power Rangers. So, for me, they are super-significant in being my introduction to super-heroes, sci-fi, super-powers, and to comic books. Even before I knew what comic books were, I was drawing my own comics, because I wanted to tell Power Rangers stories of my own.

When I got contacted about this project, then, it was like a no-brainer. A perfect fit. I feel like my entire life has been leading to this moment. [laughs] 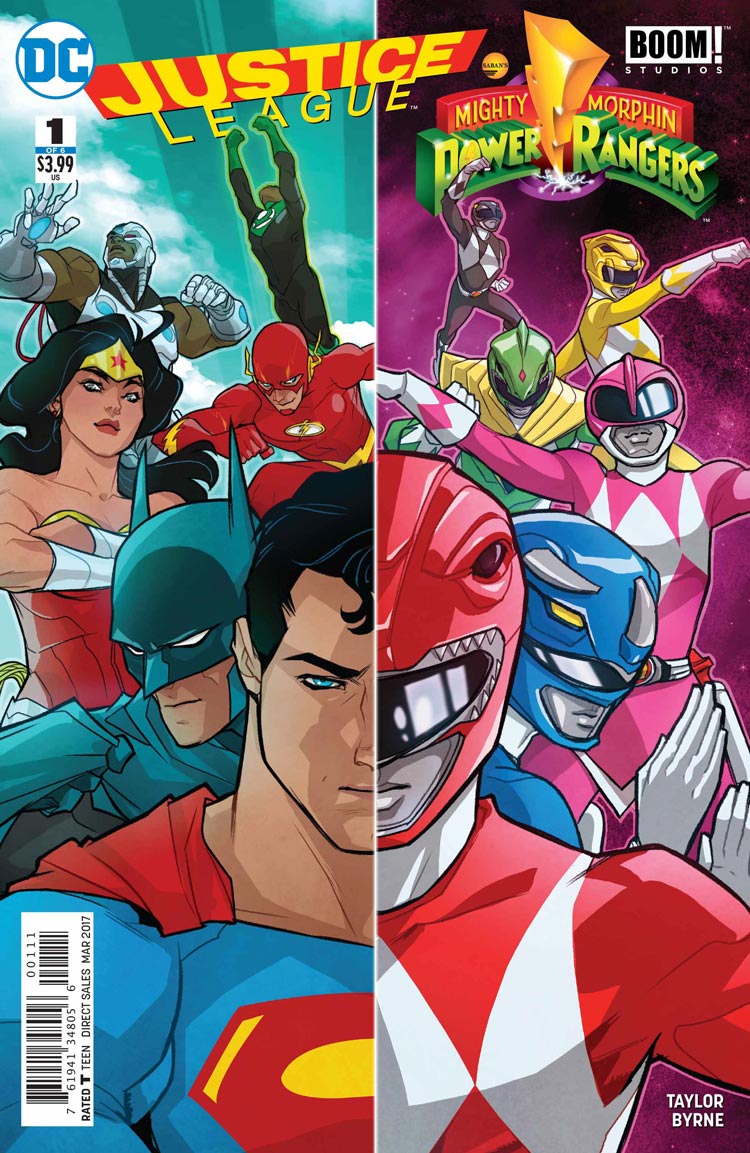 Tom Taylor: It was show on at four o’clock in the afternoon in Australia, so it was perfectly timed for all of us getting home from school. It was just the thing that you came home and watched. I had a couple of the toys at least. It was just a fun show!

I’m really happy to have the chance to play with these characters from my nostalgic past.

MS: I wonder how challenging it is to express character difference when you have helmeted characters in a uniform like the Power Rangers, versus more open expression or individualized costumes with the Justice League.

SB: I think color is helpful! I know when I did my Power Ranger comics as a kid, I didn’t have color. I only drew with a lead pencil, so I’d have to write in “Blue” and point it to which Ranger it was, so people would know. [laughs]

Now, there’s a little more detail going on, as they all have unique helmets. So, that helps. But I also try to capture the mood or personality in their body language, if they’re saying or doing something that’s particularly revealing about their character.

They all kind of stand out in their own way when they interact with the other characters in the writing as well. 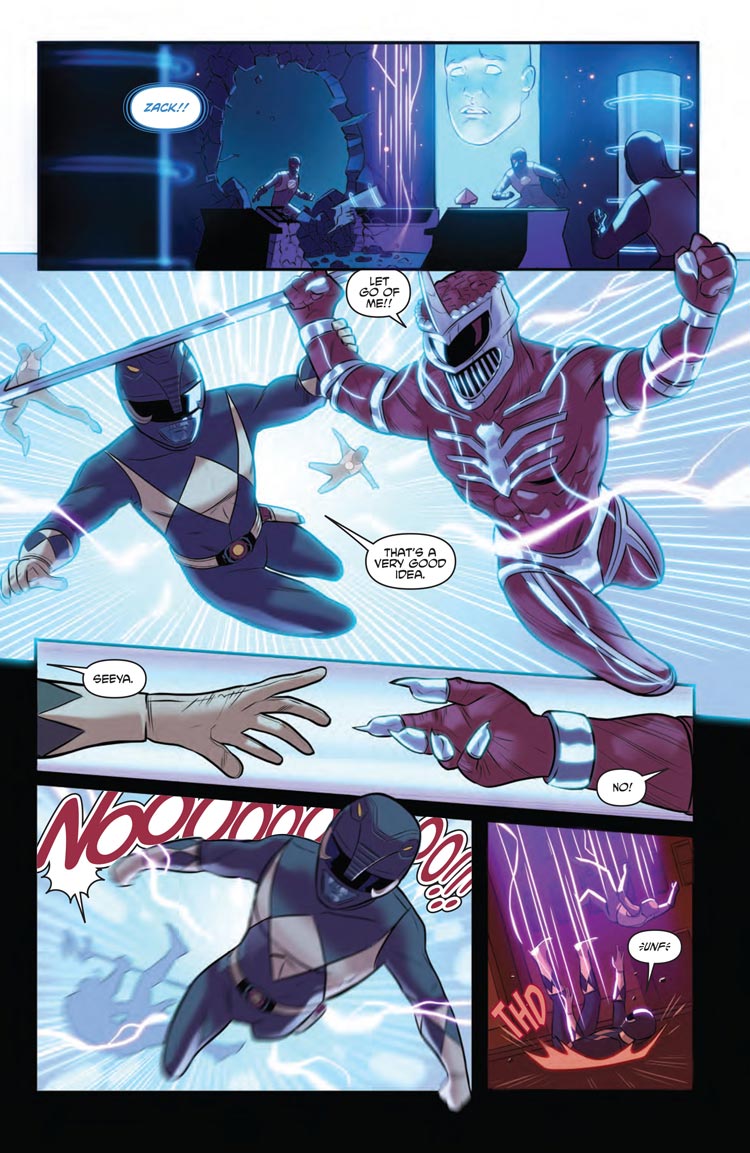 TT: He brings a really great perspective actually. He generally has a better sense of humor than the other Rangers. I always felt like he’s been overshadowed by some of the other characters, like Tommy and Jason, so I was really keen on using Zack as a point-of-view character for the series.

Especially since he’s the first person to meet Batman. I figured they’d have a really great dynamic. And as we get into issue #2, I think they have this really great vibe together.

That’s the kind of thing you look for as a writer. What happens if I put this person next to this one? Oh wow! Genius! Hilarious. I’m going with it!

And that’s what really sold me on using Zack here: putting him next to Batman.

MS: In some sense, Stephen, you’re pulling double duty by drawing the Rangers in costume and out of costume. How are you finding the latter and making them distinctive?

SB: I didn’t worry too much about trying to make them look like the actors from the original television show, because I feel personally that if I get too focused on doing a likeness, it can get a little stiff. That happens when I’m working off a photograph. The art can lose energy.

I also referenced what they were doing in the other MMPR comics and how they were being interpreted there. But as long as you stay true to their personalities and their essence comes across, I don’t think there’s a problem. 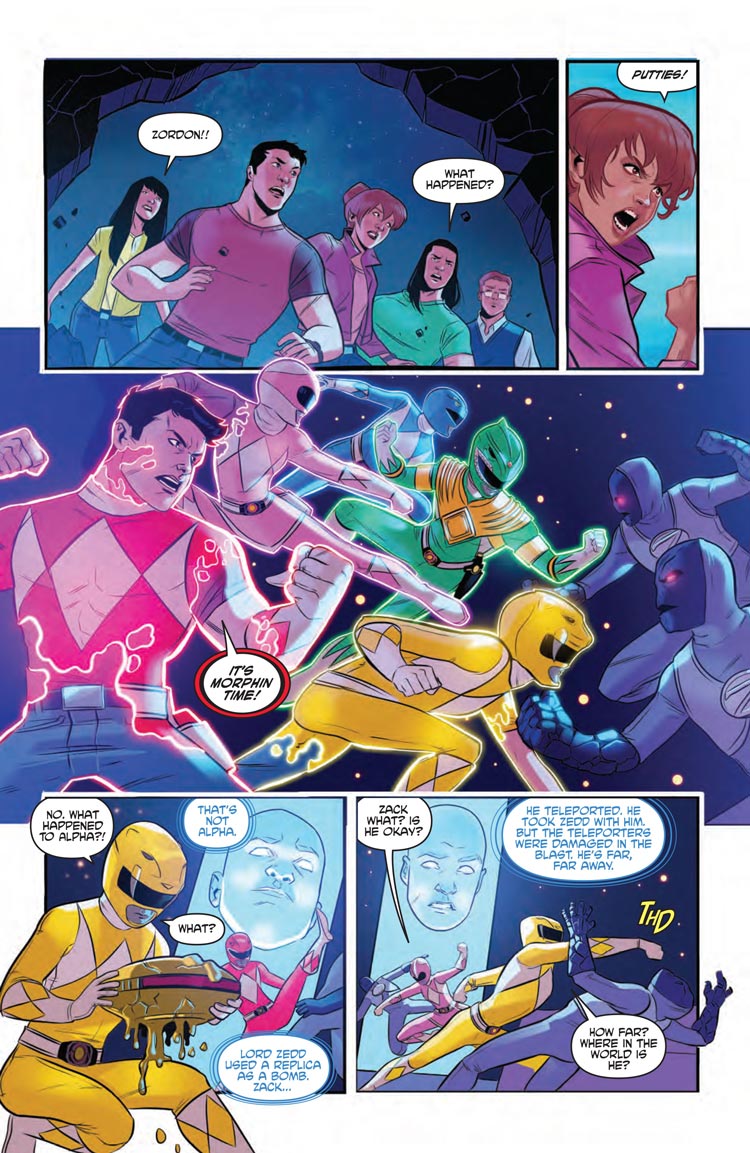 MS: So how close are you tying this to the other Power Rangers books running right now at BOOM!?

TT: I’m not really, to be honest. I’m reading Power Rangers: Pink and certainly reading what Kyle Higgins is doing on the main book, but this is bringing the core of the two groups together. So, I’m really just taking that first Power Rangers team and putting it together with the essence of the Justice League. That’s what we’re going for.

We’re not following heavy continuity and really just doing our own thing. Which is huge. There’s a really big thing that happens on page one, and then another massive thing that happens like six pages later — and that’s BEFORE these two teams meet. So, we have enough going on that we don’t need to worry about continuity.

It is just the two teams you’ve read, watched, and loved your whole life coming together for the first time.

MS: We’re dealing with two different universes here, which is pretty clear in the first issue. How do you feel the two universes differ tonally?

TT: Part of the challenges of writing this is that, especially in its early days, the Power Rangers universe is a much more innocent universe than the Justice League’s. It’s about melding those two together in a way that feels organic, and that leans into the fun of it all.

I think Stephen said ages ago that this is the most fun he’s had on comics, and I feel the same way. I just want to make sure find the fun of that first iteration of the Mighty Morphin Power Rangers and throw the Justice League into that. 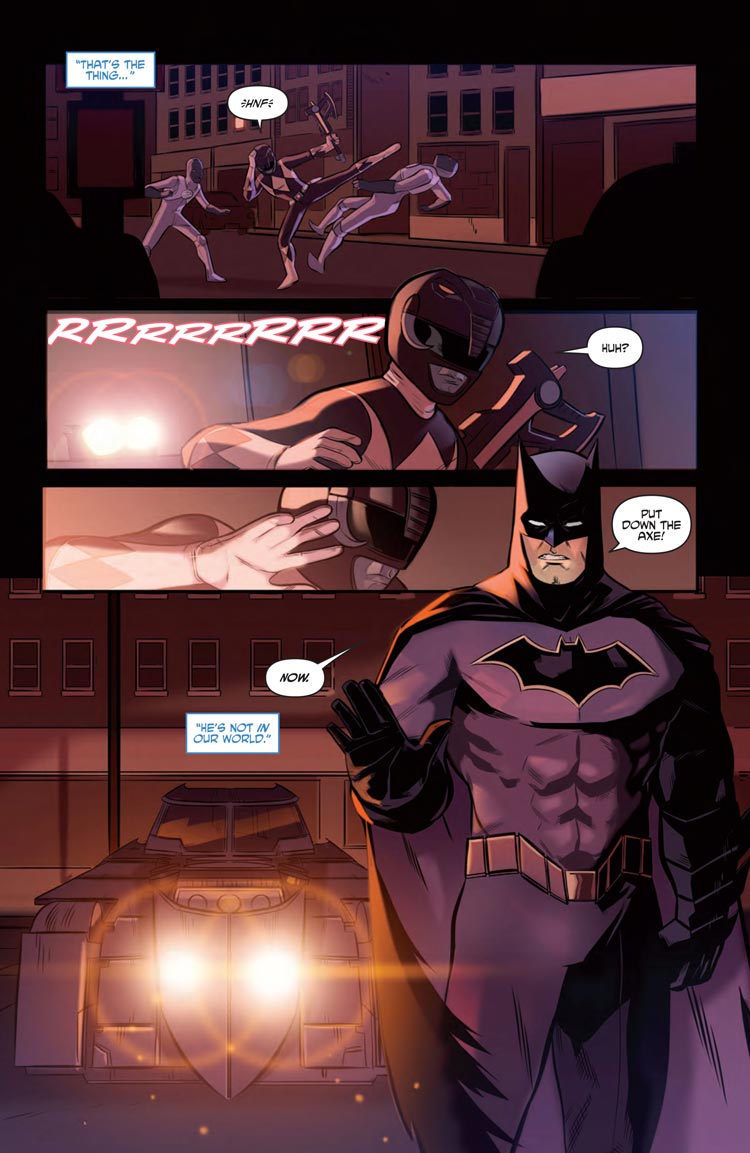 SB: It’s certainly a bright, colorful version of the Justice League characters I’m doing, but you’ll see what I did with the color work in the beginning with Angel Grove and the Power Rangers universe. It’s super bright and saturated, until they get thrown into the Justice League’s universe. I then went a little darker on the palette to show that it was different for them, and not what they were used to.

It’s not that I’m approaching the DC Universe as grim and dark, but once all the characters start meshing up and teaming up, there’s lots of color and fun to be had on both sides.

MS: Part of these type of meet-ups usually involve this type of obligatory, hero-versus-hero fight. How do you keep that fresh for you as a storyteller?

TT: You just have to take it from a character point of view and make sure it makes sense for the characters to get off on the wrong foot. I can’t stand that inorganic “we don’t know each other, so let’s punch each other in the face” thing that you do see in some comics.

Obviously, it’s not entirely logical, because you’re talking about two people with powers and crazy costumes meeting in an alley, but it does need to make some logical sense.

I did it for Injustice. I pushed characters into a place emotionally where I thought it would make sense, even if I didn’t agree with them personally. You just have to do that. 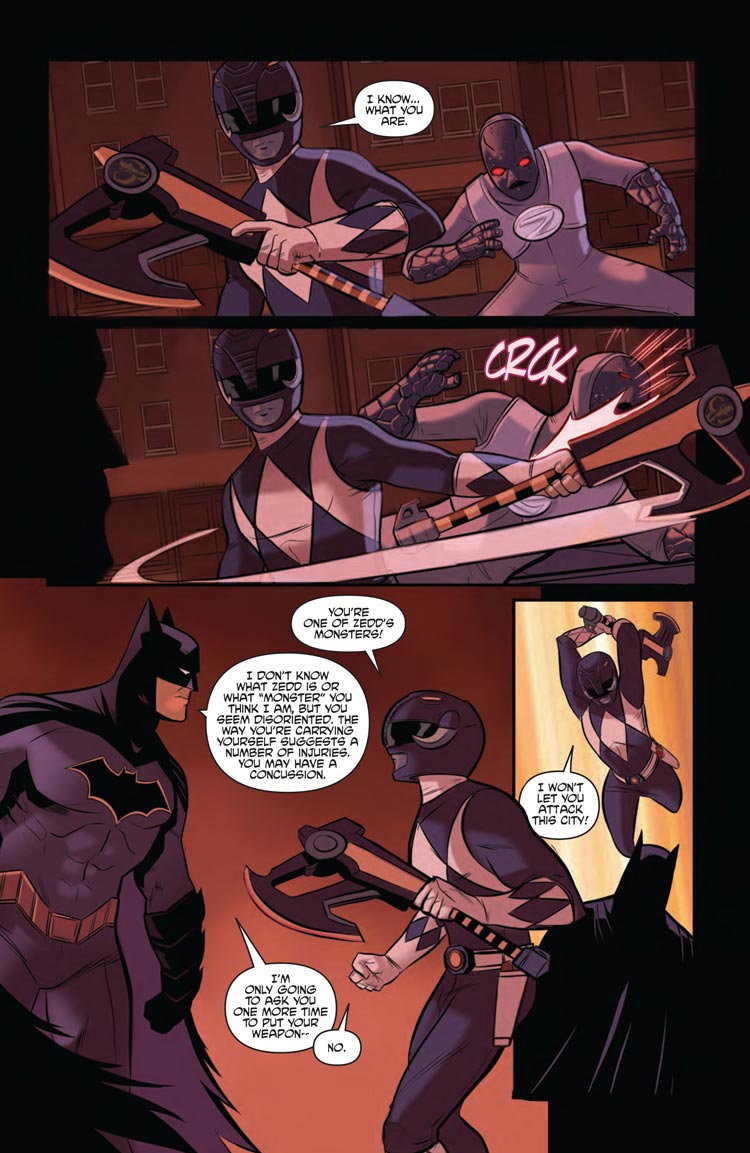 MS: For both of you, this is not the only Justice League-related book you’re working on in the near future, with Tom on Injustice 2 and Stephen on next week’s Justice League of America Rebirth: The Ray book. Can each of you give a little tease what you have coming up?

SB: One of the things I’m really excited about is that it’s a gay character, written by a queer writer and drawn by a gay artist. I think it’s very authentic and it’s excited to see that creator combination on that type of story.

TT: It’s fantastic! I’m so looking forward to that.

And with Injustice 2, I’m coming back to something I absolutely love. I never really wanted to leave, and if I wasn’t writing my own TV show, I never would have left. If there was just three more hours in the day, where I could have slept, I never would have left. I felt like I was abandoning characters and people that I brought to this place in the worst universe I could possibly imagine. And then I said, “See you later!”

The first issue of Justice League/Mighty Morphin Power Rangers arrives this Wednesday from DC Comics and BOOM! Studios, written by Tom Taylor and drawn and colored by Stephen Byrne.