Rachel Rising just completed it’s first major story line with issue 24, and the defeat of the evil standing in Rachel’s path. However, there were several loose ends at the conclusion, including, “Who murdered Rachel?” Jessica Boyd got a chance to chat with creator Terry Moore about the new arc starting this Wednesday with issue 25!

Jessica Boyd: With the main wicked witch destroyed (in issue 24) are the supernatural elements on the back-burner or will they continue to play a role in the story? 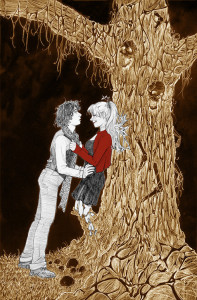 Terry Moore: There is more to Rachel’s world than “just”witches, so it’s time to explore the rest of the town’s peculiar residents. It gives me the creeps just thinking about it.

JB: How big of a role will everyone’s favorite child serial killer, Zoe, play in new stories? Despite the previous dangers she has posed to Rachel and Jet, can everyone now assume she’s part of their unusual, witch-infused family?

TM: By the end of the Lilith story, I felt like the core group had finally come together. Avengers assembled, so to speak. Rachel, Jet, Aunt Johnny, Earl, Zoe… this is our “family”. They could get on a phone plan. But yes, Zoe is part of this bizarre group now. The dynamics possible between these characters just boggles my mind. I love ‘em.

JB: You had an original procession and concept in mind when you first created Rachel Rising, however fan demand as well as potential television deals has kept the series going. How has played a role in causing you to rethink plot-lines and story elements? Are there reveals intended for the books original run that are now being saved for new arcs?

TM: Honestly, yes. I originally planned to reveal all in a 24 chapter story. But, I also knew that I this would lay a solid foundation for an ongoing series—I’d have a great cast, a lot of open doors and an entire town to explore filled with eccentric characters doing creepy things. But then the love and support for the series grew to such a point that I realized I had something really special going on. When you’re hitting on all cylinders, you hate to slow down, right? Why stop when we’re all having fun?

JB: What was your reaction to the #SaveRachelRising movement this past fall on social media and your #KillMeZoe contest (where people posted social media pics with this hashtag to get the most attention, and be featured as a murder victim of the character Zoe in an issue.)

TM: As you can imagine, it was very touching. I posted my honest confusion about book orders one morning, which I probably shouldn’t have done. It’s not very professional, but I’ve never felt like a businessman. I’m a lone creator who talks openly to people interested in what I do. So I said something publicly about the apathetic book orders dropping during the run of a book with such strong fan support. It just didn’t make sense—there was obviously a break in the chain somewhere. Rachel fans were growing and the retailers were not feeling it at all. How can that be? So the fans rallied and started a grassroots campaign to make some noise on behalf of the book. And I launched a contest to encourage Rachel Rising awareness. Did any of it help my retail business? I don’t know yet. I’ll find out when the orders for the next book or two come in. 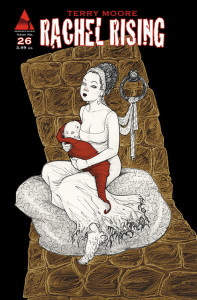 JB: For someone who has never picked up Rachel Rising before, how reader friendly is this latest issue?

TM: I hope it is approachable. You get to see the core group interacting, discussing their recent adventure and clearly plotting what they need to do next. It’s not a simple primer, but hopefully it is intriguing enough to pull a new reader in and compel them to read another issue.

JB: Did you set out to create a horror comic with Rachel Rising or was it just a natural progression of elements?

TM: I knew during Echo that my next series would be horror. Echo and Strangers In Paradise both had moments of sheer horror, and I felt like they were some of the strongest scenes, so I wanted to try a series devoted to the study of the “train wrecks” of life. We can’t help but stare, can we? It’s ghoulish, but it also provides the opportunities for genuine expressions of love and compassion as we run to help. Sometimes, when things are at their worst, you see humanity at its best. That is irresistible for any writer.

JB: Rachel and her best friend, Jet, have dealt with supernatural takeovers, sometimes by spirits of the opposite gender. Much of your work, including Strangers in Paradise, has dealt with women in gendered roles. What is it about this theme that keeps drawing you back in?

TM: It’s something in me that wants us all to love and respect each other, from the inside out. No matter what you believe, human beings are walking miracles. Then, when you get to know them, one by one, you discover that they’re also an incredible source of joy and hope to your own life. That’s just solid physics right there, then you drape a body over that. It doesn’t even matter yet what color it is, much less what sex. This is the basis of my world view and it impacts everything I write. My stories are about hope, and no matter what action flares up in front of us, the tools for coping come from the hero’s love and respect for humanity. Sometimes it has to be learn the hard way, but that’s where the answers lie.

JB: Is there anything else you’d like for people to know about this chilling yet heartwarming series?

Issue #25 of RachelRisingcomes out Wednesday, April 30, 3014. If your store does not have this book on order you can purchase back issues and volumes through Terry’s website: www.AbstractStudioComics.com .