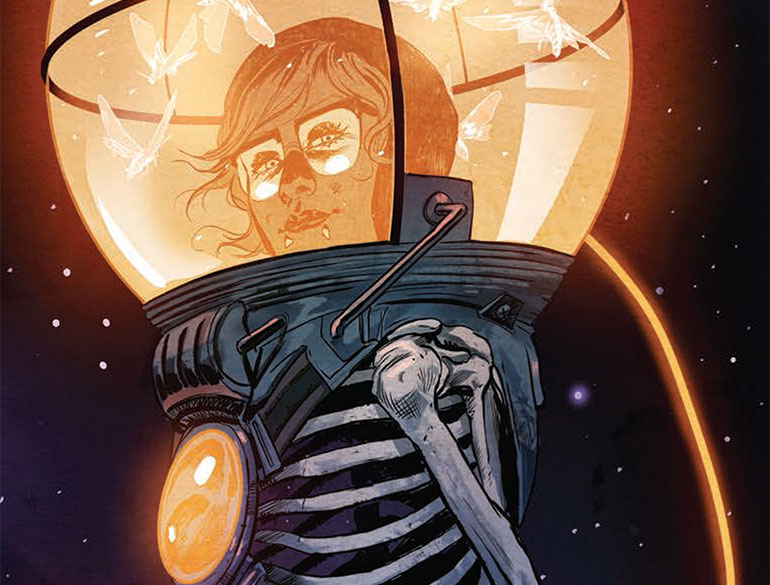 Are you ready to find out what happens when you die?

Tomorrow, IDW’s Black Crown imprint, headed up by comics legend Shelly Bond, launches Euthanauts, an exploration into the great beyond — and beyond! Comicosity sat down with writer Tini Howard to find out more about the new series, her work with artist Nick Robles, and her other collaboration for Black Crown: Assassinistas with Gilbert Hernandez.

Matt Santori: Congrats on the new series with Black Crown, Tini! Tell me a little about the premise of Euthanauts.

Tini Howard: Imagine there’s an afterlife, that there’s somewhere our souls go after we die. But it’s a really unwelcoming void, like space. Most of us just go up there and dissipate, because we’re not protected. We have no way of surviving out there.

And you can’t really get to space in a hot air balloon, right? If you tried, you’d burn up in the atmosphere, fall down and die. But if you prepared your will, your ego, and your self in a certain way, you can basically materialize in that space protected. You can then try to survive. But it’s a completely unwelcoming frontier. There’s no one out there. 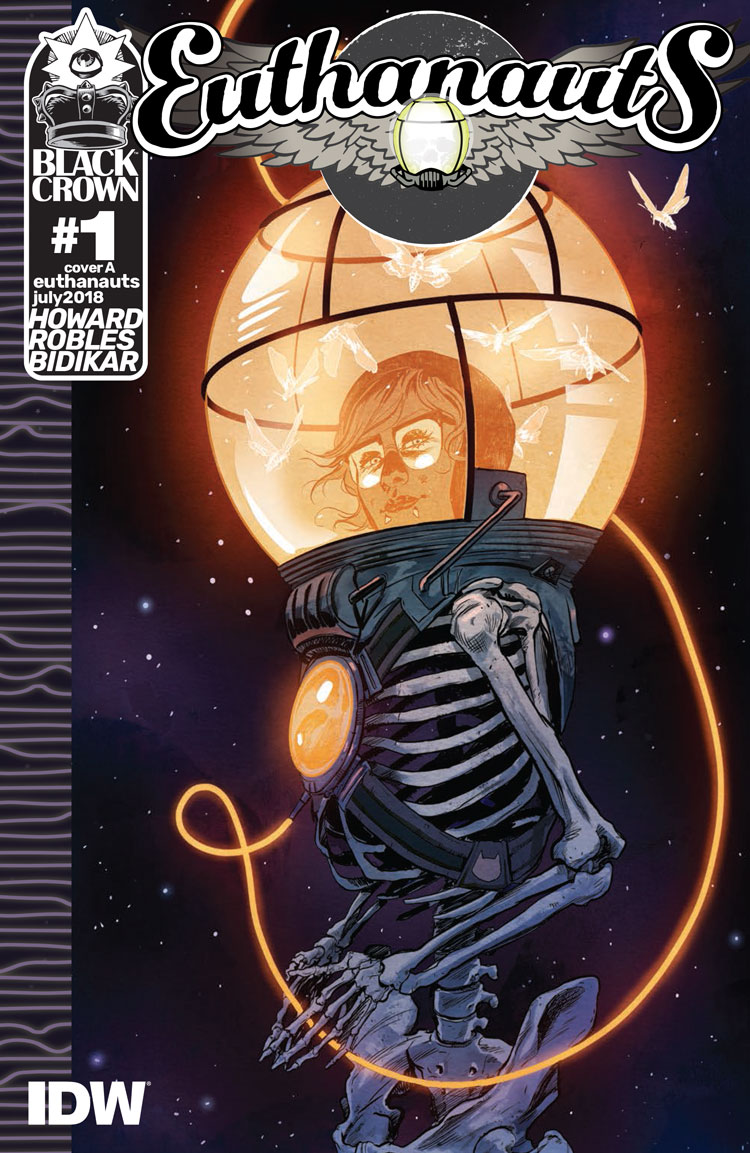 So, there is a place we go after death, but there’s nothing there. There’s no organization. There’s no set-up. It’s just a completely unwelcoming void, like space.

The Euthanauts, then, are people who die with intent, and that intent is to go to this place. However, you don’t exactly get to phone home when you get there. So, how do you go to this afterlife space and communicate back?

We follow Mercy Wolf, who is a Euthanaut, and Thalia Peacetree, who is her tether. She’s kind of like an operator in The Matrix. She had a near death experience and can move back and forth in the afterlife because of that. 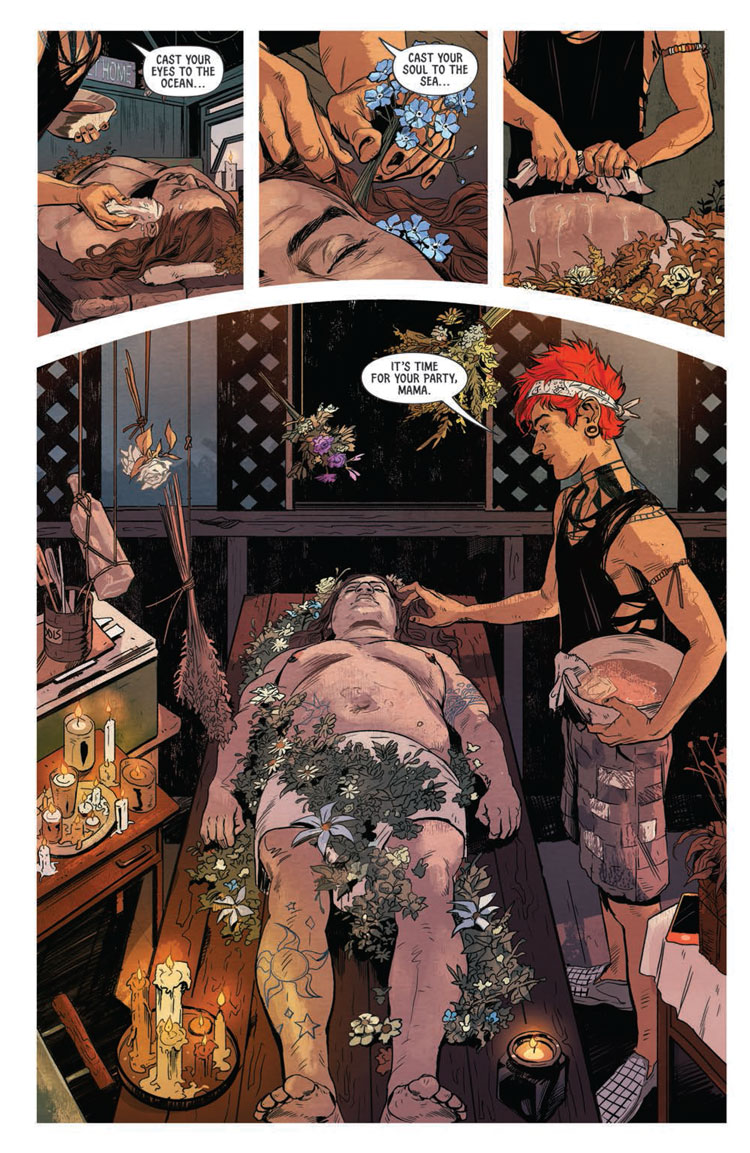 MS: You’re dealing with this group of adventurers, shamans, terminally ill people. But then you have this woman who is a funeral home receptionist. Tell me about Thalia’s psychology and place in the series.

TH: My favorite way to describe Thalia is, if you’re a Six Feet Under fan, that Thalia is a Fisher. Emotionally repressed, full of anxiety, has a lot of internal stuff going on, but to the outside world, she’s just holding it together. Her friends see it all over her. Early on , they just read her to filth. They know that she’s got all this internal strife.

Thalia, in a lot of ways, manifests my internal anxieties. She has a compulsive disorder as I do. I have a life of suffering from anxiety disorders, and Thalia feels that as well. A lot of my anxieties are death-focused. 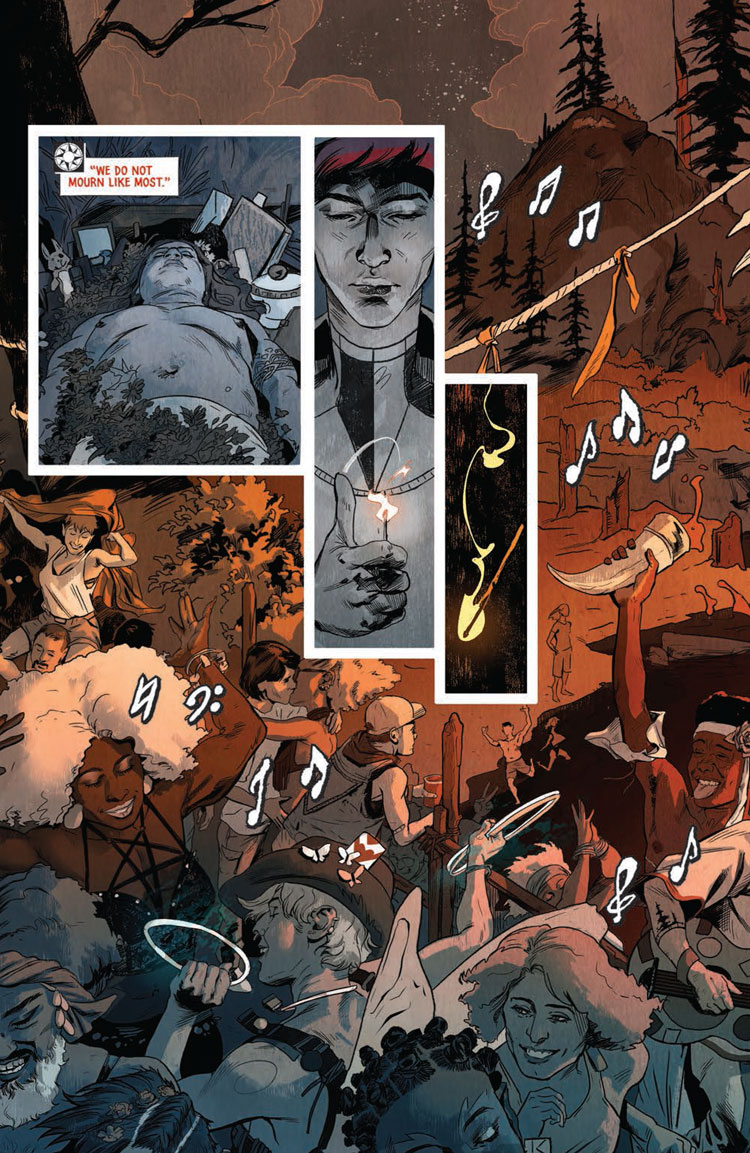 As a kid, I used to watch Apollo 13 and I was really scared of space. I was like, “Oh my God! They need to get home with duct tape???” For me, this idea of being somewhere unwelcoming and you’re not conscious for long — and if you don’t keep it together, you might be gone again? There might be nothing out there. But there might be something, if you have the will to find it.

As anyone who’s read Green Lantern knows, there’s no greater enemy to will than anxiety. Having to fight that, and build a will to protect yourself while facing your worst fear? But the payoff is — you get to life after death. Maybe your worst fear — death — isn’t something you have fear anymore. But it’s a really tough gauntlet to get there. 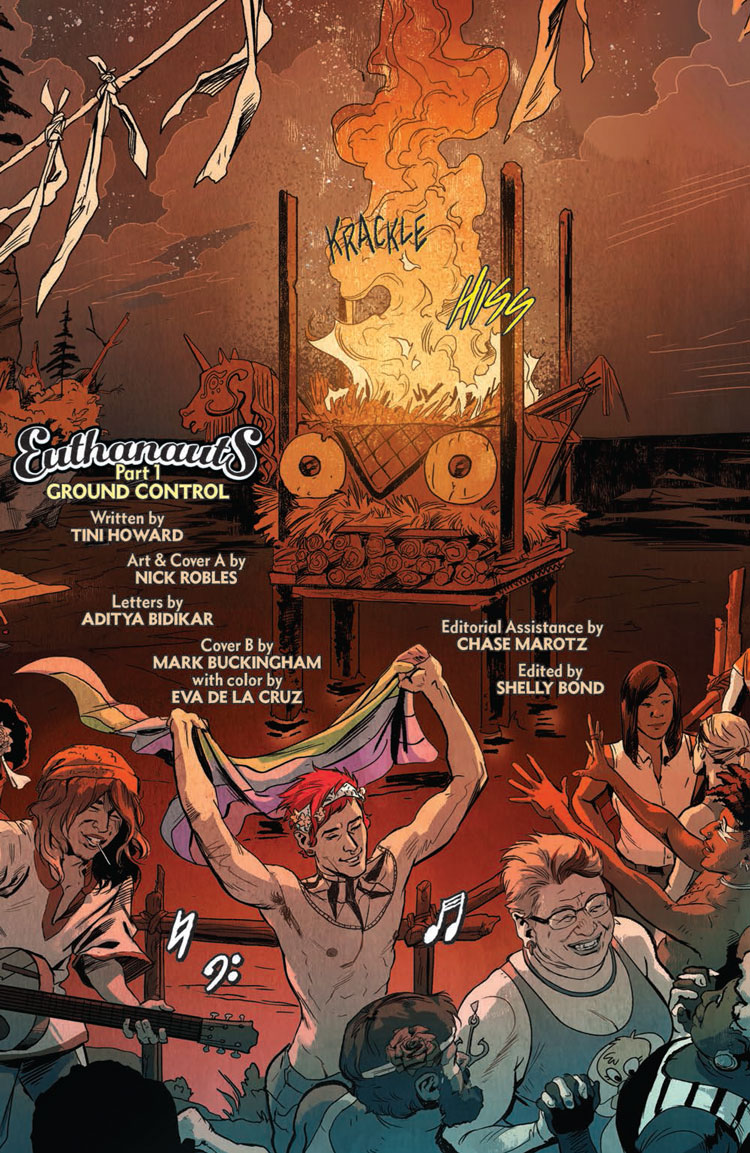 MS: So, I’m really interested in this parallel between outer space — which every kid spends a lot of time learning about — and death.

TH: Space has always been really scary to me. Like, for one, we’re floating in it. Space and death are simply both unavoidable. I don’t ever have to go into space — most of us don’t. But it’s all around us. If a black hole opened up next to Earth tomorrow and swallowed everything, I mean that’s it. We can’t control what happens to us. 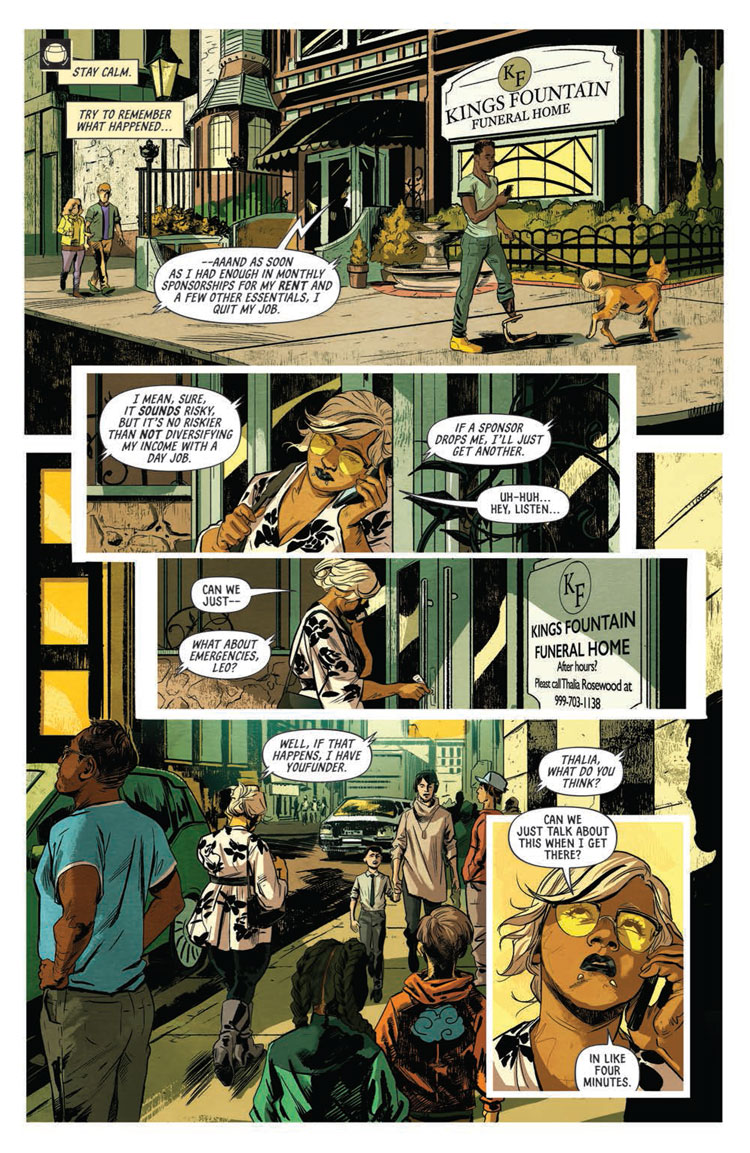 MS: You’re working with artist Nick Robles on Euthanauts. What do you think he’s bringing to the series that’s unique or special?

TH: Oh my God. So, Nick is someone that I think everyone has their eyes on right now. He’s just brilliant. I’ve been a fan of his work because he loves to draw pretty boys and I love how he draws pretty boys. He drew a piece of Kid Lobotomy fan art, and Tess Fowler gave up one of her covers so that Nick could draw it. She and Shelly Bond were that impressed with it.

Shelly suggested Nick for Euthanauts and I couldn’t have said yes fast enough. Nick named things. Indigo, one of our protagonists, used to be a side character, but Nick loved him so much that it made me want to write him more for Nick. He’s now a major part of the series. And because Indigo is a pretty boy, Nick draws him so well.

It’s an amazing collaboration. There are a lot of words and phrases in the book that are Nick’s. And there are times where I say that I want this specific thing. We really work well together. It really feels like our baby.

There’s a line in the book, “We are not born like most.” That’s Nick. The suits are called the Soul Atrium and the Wraith Lily. That’s Nick. Those are things that he wrote. It’s just so good. I want everything he’s bringing to the table. 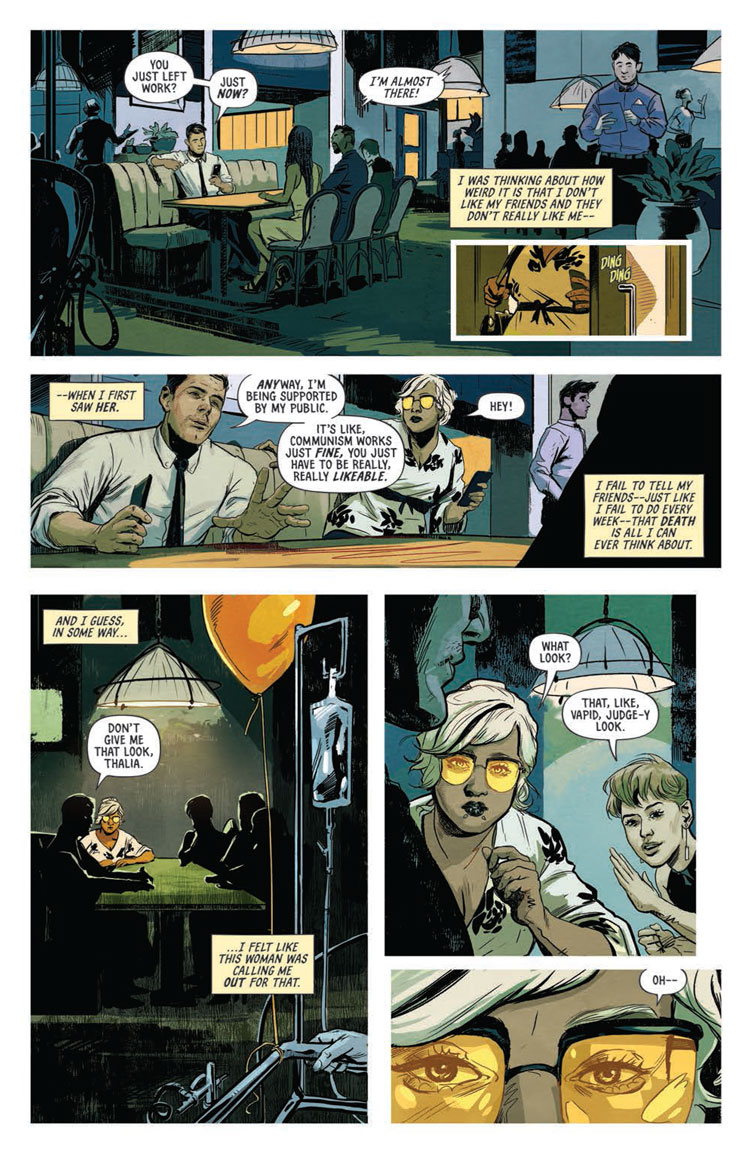 MS: This is not your first book for Black Crown. You’ve been working on Assassinistas with Gilbert Hernandez. How’s it been working with editor Shelly Bond on both series?

TH: I was just finishing up my first creator-owned series The Skeptics, but Black Mask is sort of like Image, you know? You do a lot of your work yourself. It was my first time writing a book where I didn’t have an editor holding my hand. I ended up hiring an editor myself.

So, I felt like I wasn’t ready to do another creator-owned book without an editor. I thought, I wish someone would call me on the phone and hold my hand through the next one. And somehow, my favorite editor in the history of comics independently decided she liked my writing and called me on the damned telephone.

And I was like, are you kidding me? I wouldn’t be in comics if I hadn’t eaten up all of the Vertigo comics that were made when she was running the show over there. 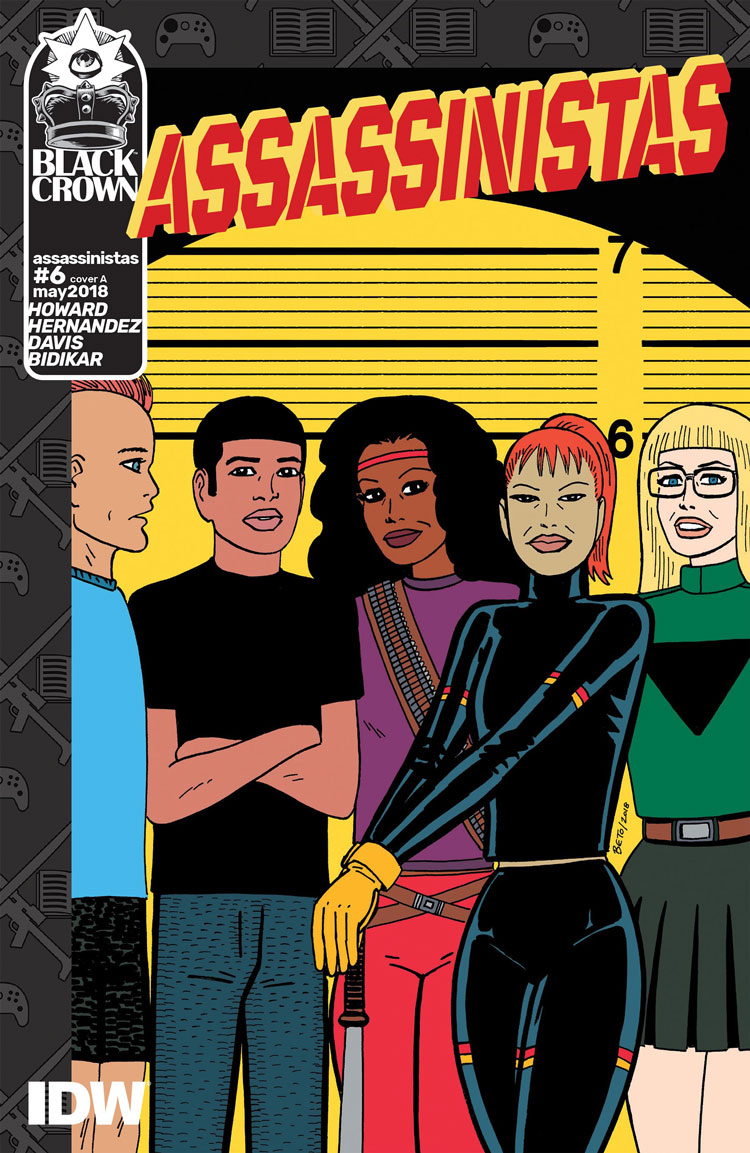 We became fast friends, and talk on the phone about two hours a week. We are both super intense people. We both love our projects with our whole fucking hearts. We just clicked. We have similar sensibilities and aesthetics.

I had pitched her a lot of things and after I pitched Assassinistas, she wrote back and was like, “What do you think? Howard and Hernandez.” And I was like, “I think you’re crazy. He’s going to say no.”

But he said yes! And apparently he loves the book. I mean, I know he does. It’s really really cool. Having him as my artist changes my writing dramatically, because I can trust him with so much. One of the most emotional books in comics is Love and Rockets. It’s so subtle and quiet sometimes.

And I like to do that with Assassinistas, which I think throws a lot of people. They think it’s going to be a loud book. But it’s a family book. 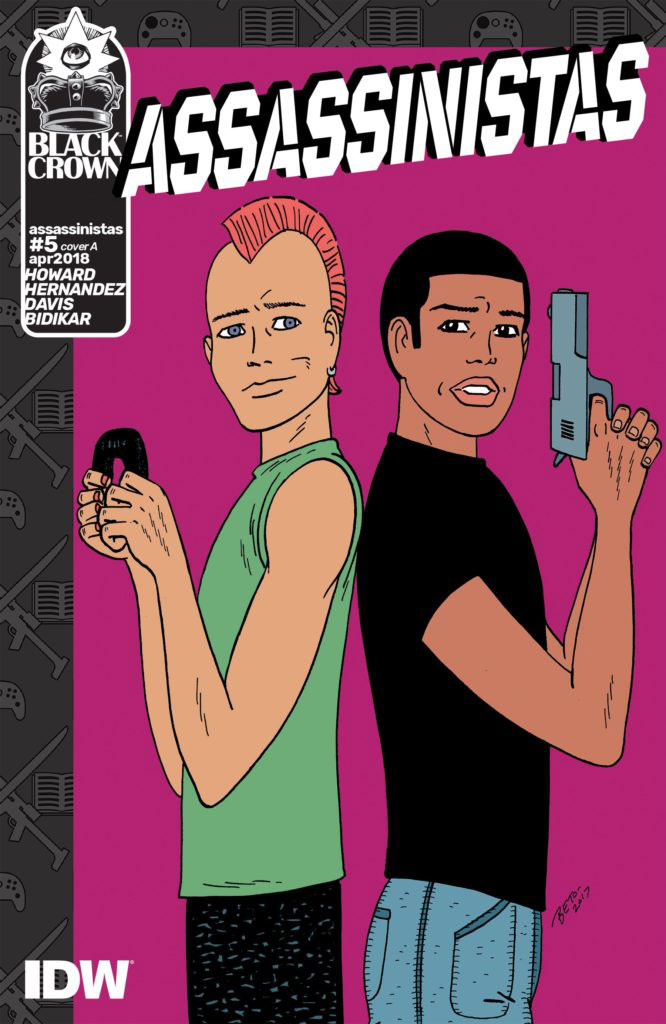 MS: Truly, Dominic and Taylor are one of my favorite couples in comics. And the relationship with Dominic’s mother Octavia is so wonderful, and so fascinatingly easy…

TH: Dominic and Octavia had existed for a long time. I wrote a short story about them called “Heartbeat” a long time ago. I had actually wrote a theme from that story into issue #6. It’s a very short flashback to the first time Dominic tried to come out to Octavia and it didn’t work out. And it’s her fault.

I love bringing Taylor into the mix because I just love him a lot. When Dominic looks at Taylor, he sees normalcy. To a lot of people, they are an interracial gay couple where one of them walks around with a pink Mohawk — the opposite of normal. But to Dominic, that’s his normal. He is in love with Taylor. He wants to get a white picket fence with Taylor. They can raise babies. Dominic can get a business degree and Taylor can be a professor. He has this whole idea of a normal life that is nothing like he was raised in when he looks at Taylor. That’s his normal. That’s his home.

But when he brings Taylor into his world, Taylor is like, this is super cool. Taylor has a lot of heart, and he’s their problem solver. That’s what he does. He’s an intellectual and academic.