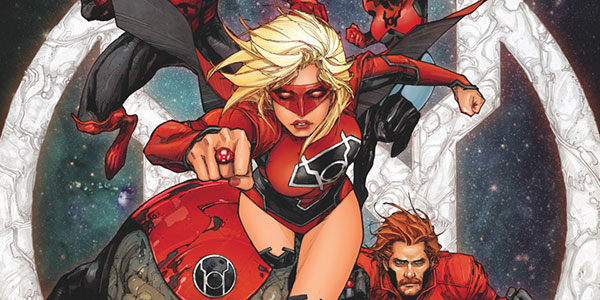 Supergirl has gone through many changes over the years, but none so stunning as her transformation into a Red Lantern. Taking Kara Zor-El on this new path — as well as reflecting on her beginnings — is series scribe Tony Bedard. Bedard spoke to Comicosity to share a little bit about why he wanted to move Supergirl in this new direction, how he will be reflecting on Kara’s story in the first issue of Secret Origins, and how Supergirl is no longer just in the shadow of her more prominent cousin. 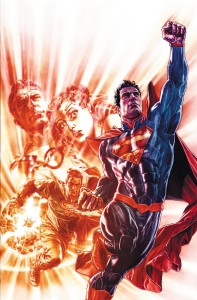 Matt Santori: Tony, thanks for taking the time to talk to Comicosity! With the inaugural issue of Secret Origins featuring among its stories the origin of Supergirl, what will you be exploring that we didn’t see in her first New 52 issue?

Tony Bedard: We’re going to see more of what Kara was like before Krypton’s destruction, including some new stuff about her mother, Alura.  Turns out that while Jor-El and Zor-El were Krypton’s greatest scientists, their wives were powerhouses all their own.  They really wore the pants, and any daughter of the House of El was expected to live up to high standards — sort of the Kryptonian version of being Hillary Clinton’s daughter, or being born a Kennedy.  Kara will end up with a motivation to be Supergirl that isn’t just based on Superman’s example and the values he learned growing up in Kansas.  Supergirl deserves to me more than just a Superman knock-off and this Secret Origins story helps define her on her own terms.

MSG: Supergirl’s origin, of course, is intrinsically tied to that of that of her marquee cousin, Superman. Their relationship (or lack thereof) has been focused on quite a bit to date, but what’s your take on where they’ve been and where they could be headed in the future? 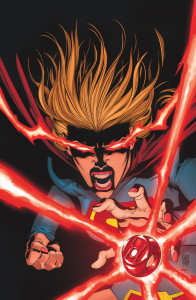 TB: In the past, it was usually Superman showing Supergirl the ropes.  She was like a kid sister to him.  In the New 52, there is more of an adversarial relationship, mostly stemming from the fact that Kara didn’t grow up here and she doesn’t fit in like her cousin does.  She wears the “S” on her chest, but its meaning to her is different than its meaning to Superman.  She was coming of age when she was torn away from Krypton. Kryptonian culture isn’t an abstraction to her.  Yeah, she and Kal-El are still family, but there’s plenty of friction, too.

MSG: As the ongoing scribe for Supergirl’s solo series, you’ve taken Kara to a drastically different place than where she began — into the role of Red Lantern. What motivated you to take Supergirl in this direction and how do you feel her personal story has led her to this place?

TB: Part of what’s behind this is all the bad stuff that’s happened to Kara ever since her father tricked her into that escape pod and sent her to this backwards world of ours.  If you’ve been reading Supergirl since the relaunch, you know Supergirl’s gotten one bad break after another.  It’s enough to drive anyone crazy or make her lose hope.  This is where we find Supergirl when I pick up the reins on the series: about to hit bottom.  And the Red Lantern arc will be all about how when you hit bottom, there’s nowhere to go but up.  It’s about her working through her fear, anger and resentment.  She’s going to come out with a clearer motivation for being Supergirl on her own terms, rather than following Superman’s lead. 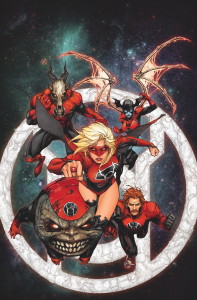 MSG: Have you had occasion to collaborate with either Red Lanterns writer Charles Soule or Justice League United writer Jeff Lemire on Kara’s ongoing adventures? How do you divide the responsibilities/territory in dealing with Supergirl’s ongoing adventures, especially now that she’s a bit more removed from the Superman ?

TB: I’ve been coordinating with Charles on the Red Lantern stuff and it’s been a pleasure.  He’s DC’s new breakout star and I love what he’s doing with Red Lanterns.  In fact, the idea to make Kara a Red Lantern was something Charles suggested. The moment I heard it, I realized it was just the thing I needed to pivot her from woe-is-me to someone taking control of her destiny and her identity.  I know there are some who fear that a red ring is a step back for Kara, but I’m telling you it’s the key to a brighter future.

As for Jeff, I just reached out to him yesterday to start coordinating how we approach Kara.  Her joining the Justice League marks another major milestone for her.  So far, she’s been a lost Kryptonian who happens to be wearing a “super” costume.  Now she’s really going to have to step up to the Supergirl role, especially since she’s part of a team.  I think she’s going to be more Supergirl than ever, even if she’s still learning to get by in an alien society.

MSG: By taking Supergirl back to having much more recently arrived than she had pre-New 52, what kinds of opportunities do you feel DC has opened up for you as a creator and Kara’s writer? 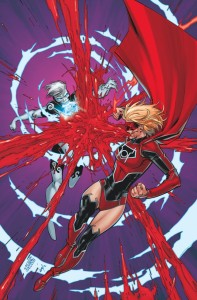 TB: I think more than anything it’s a chance to let Supergirl stand on her own, rather than being a subset of Superman. She has her own agenda and reasons to be Supergirl that have more to do with Krypton than Kansas.  I think the New 52 has given us a chance to empower Supergirl and make her better, edgier, and more admirable than ever before.

MSG: In a broader sense, the title Secret Origins has been one that fans seem to have been clamoring for since the start of the New 52. How do you balance establishing new ground for a character that is clearly very different than previous iterations, but still maintain what is considered iconic about her?

TB: Well, in Secret Origins, our top priority is to lay down the basics for the character — origin, powers, motivation, etc.  It’s the motivation that Kara needs, and I think I came up with something that really works for her and adds a new dimension to the family of Kara and Kal-El.

Tony Bedard writes the ongoing adventures of Kara Zor-El in the pages of Supergirl, and will be contributing an origin story for the Girl of Steel to Secret Origins #1, arriving from DC Comics in April.