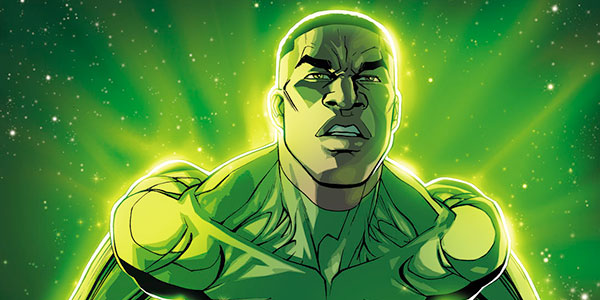 It’s a brand new world for the Green Lantern family of titles, as the torch is passed to a new team of writers — not the least of which is DC Comics newcomer Van Jensen. Launching Green Lantern Corps alongside Robert Venditti this Wednesday, the writer is putting perennial favorite Lantern John Stewart back in the line of fire with a brand new status quo. Jensen took time out of his busy schedule to chat about John Stewart’s past, his relationship with Hal Jordan, and just what will be defining his future. 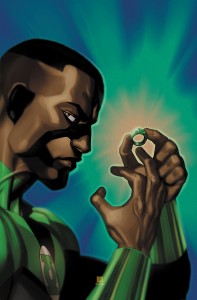 Matt Santori: Congratulations on the new series, Van! What has your personal history been with the Green Lantern mythos, and lead character John Stewart in particular?

Van Jensen: I started reading comics when I was 4, when a cousin of mine would bring over his comics. And he was a big Green Lantern Corps fan. After falling out of comics during the late 1990s, I started to get back into them right around the time of Green Lantern: Rebirth. I hadn’t read all of Geoff’s run, but I read and enjoyed a lot of it. Geoff, Peter Tomasi and Tony Bedard have done amazing work with these characters and expanding the Green Lantern universe.

I do think that John Stewart has maybe been a little overlooked during the past decade, though. He has a presence, but we haven’t seen him develop a lot. I’ve always found him fascinating, going back to stumbling across an issue of Green Lantern: Mosaic when I was 10 or so. He grapples with the big questions and fights for the little guy, qualities that make him perfectly suited to helping rebuild the Corps after the recent upheaval.

MSG: It’s been nearly a decade since the Green Lantern family saw such a major creative shift. What has it been like to work alongside Robert Venditti and do you see your run immediately breaking from what has come before? 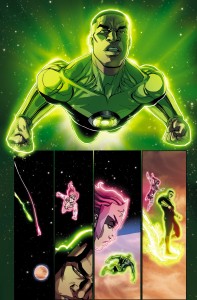 VJ: Rob and I have been friends for years, so it’s a very frictionless partnership. We probably email, text and call each other a few times a day (more than our wives prefer, to be sure). Rob has really helped ease the transition into monthly comics for me, but at the same time he’s giving me a lot of freedom to tell the story that I want to tell.

And, luckily for us, Geoff and Peter left a perfect conclusion in that it wraps up what they’ve been doing but leaves a really cool new status quo for Rob and me (as well as Charles and Justin) to explore. So while we’re forging ahead in a new direction, it’s building from the foundation of what came before.

MSG:  John Stewart has a long history in the DC Universe as playing second fiddle to Hal Jordan in some ways, but has a massive audience outside of the actual comic books. How do you plan to define his role in relation to the other Corps members?

VJ: There remains a tension between Hal and John. Hal is in charge, but in many ways John possesses the qualities of a leader: He’s an architect, an intellectual and a former Marine — exactly the qualities you’d want in someone tasked with rebuilding the Green Lantern Corps. And so, while John and Hal are friends, there’s a bit of a rivalry and resentfulness there. But John will play an instrumental part in this next chapter of the Corps, and he’ll be someone that many in the Corps look to for leadership in all of the dark days ahead. 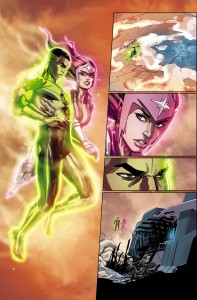 MSG: For many years, John Stewart’s narrative has been defined by loss — that of his wife and of the planet he couldn’t save. With his growing relationship with the Star Sapphire Fatality at the forefront, how do you see John’s worldview shifting?

VJ: That’s a great point. John has been surmounting his failures for two decades of comics. Enough is enough. He’s focused on the future now, and he’s putting a lot of thought into what that future holds. Fatality, being a Star Sapphire, is opposed to the life of fighting that the Corps represents. John is conflicted. He wants to pursue this relationship, but he feels called to service. He’s at a point where it’s time for him to choose, to define his own place, his role.

MSG: Green Lantern Corps has always been home to a large supporting cast of heroes. Can we expect to see other Lanterns taking center stage — new characters and old favorites such as Arisia, Salakk, or others?

VJ: Issue 21 will introduce four new Lanterns, all of them representing a somewhat different representation of willpower from what we’ve seen before. We’ll also see Kilowog and Salaak in new roles, Soranik Natu struggling with the loss of her home planet, and plenty of other familiar faces. I’m working on something with Arisia, but that’ll be a bit farther down the road… 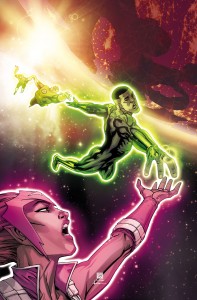 MSG: What kinds of threats can we expect to see arise in Corps and will we be seeing more of the universe in issues to come?

VJ: This is going to be a massive space adventure, so we’ll see a whole lot of the universe both in the short and long term. We’re really exploring the way that the universe is reacting to recent events, particularly the Third Army, and how the Corps isn’t seen as a benevolent force any longer. As for threats, the Durlans have some big, nasty plans for the Lanterns, and they’ve recruited some unpleasant friends to join them in their schemes.

VJ: If you’ve read Green Lantern #21 (and if you haven’t, go pick up a copy already!), then you know that the mysterious villain Relic is about to unleash some serious damage on the Corps. If that caught your eye, then you will not want to miss Green Lantern Corps #24. Relic’s impact in that issue is going to be felt for a long, long time to come.