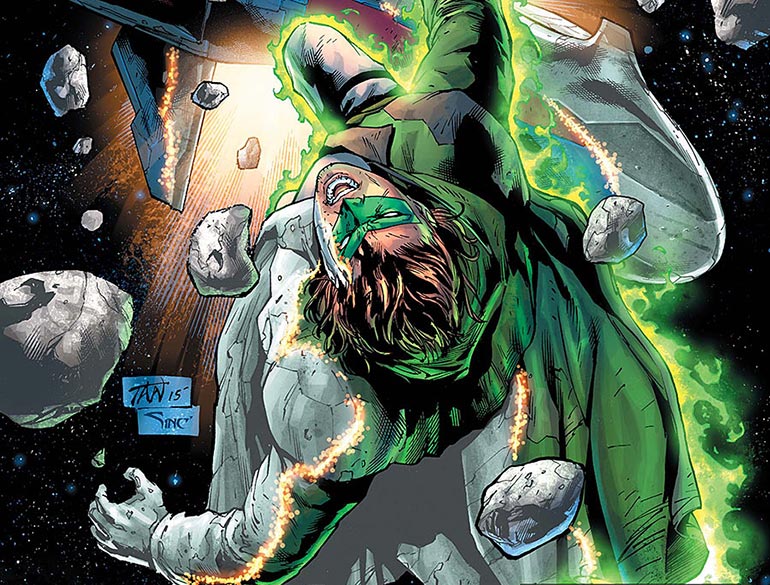 It’s been a great many years since the DC Universe was populated by a single Green Lantern, but those days are back… sort of! With last month’s Green Lantern #41, Hal Jordan finds himself the last remaining member of the Green Lantern Corps, and one without a ring. Armed only with a prototype gauntlet and his trusty (smart-mouthed) spaceship, Hal Jordan is experiencing life on the road with writer Robert Venditti and artists Billy Tan and Mark Irwin. Venditti and Irwin sat down with Comicosity yesterday to chat about the future of the Green Lantern mythos, exactly how Hal is choosing to go his own way, and what villain is going to be plaguing him next! 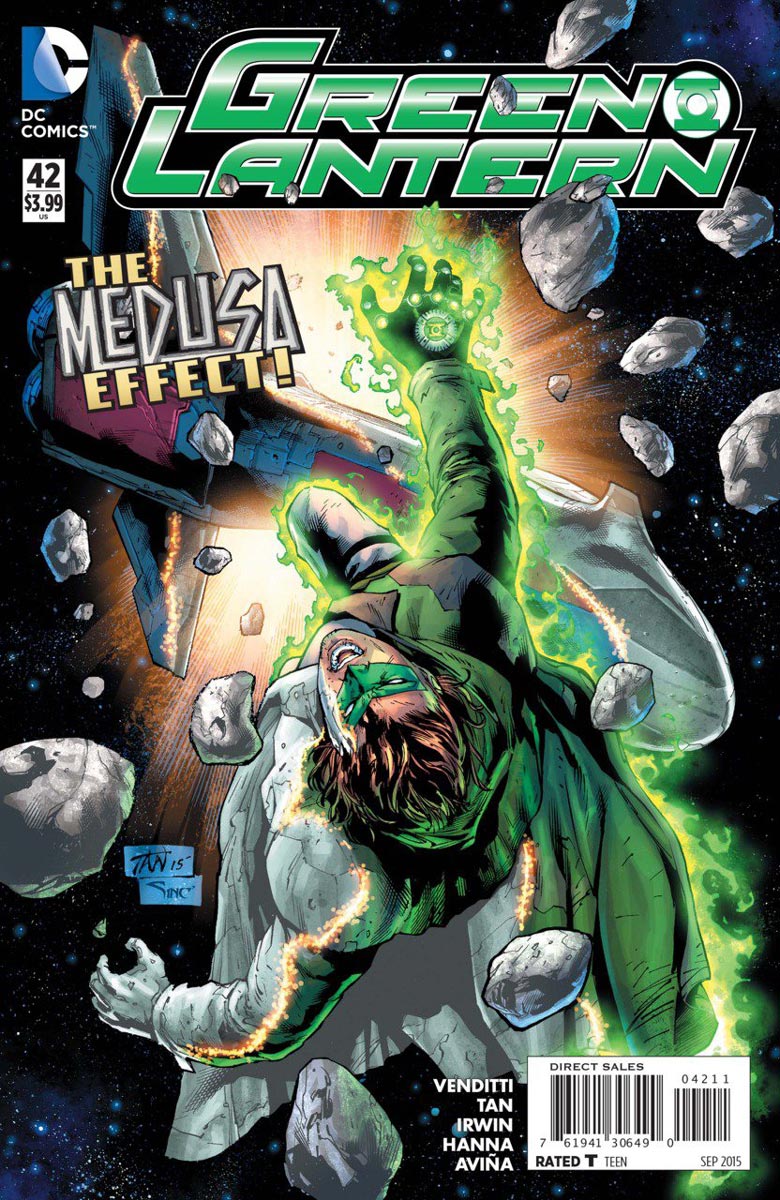 Matt Santori: With #41, you had this opportunity to go solo with Hal Jordan, which is a place we’ve been once before, but in a very different context. Why did you decide to go this way with a more roguish, Han (or Hal!) Solo-esque take and not with a more traditional super-hero approach?

Robert Venditti: I feel like it’s very in keeping with Hal’s personality, traditionally. Throughout his existence, Hal’s had this “go it alone,” one-man-army mentality, that’s baked into his background as a test pilot. Being a test pilot is a situation where you’re by yourself in the cockpit, you have to make snap decisions, and your life is hanging in the balance. That’s just who he is.

The circumstances through which this arose wouldn’t necessarily be ideal — the way the Corps’ reputation deteriorated around the universe after recent events. Most of this was beyond Hal’s control and were the result of the previous regime of leadership. He took it upon himself to carry the weight for all of that and take the blame, so that the Corps could get its second chance. So that they could get their reputation back around the universe.

It just seems like something he would do. Hal loves the Corps. He’s bled for the Corps. And given a choice between sacrificing himself and letting them fall, he’d make this choice every single time. 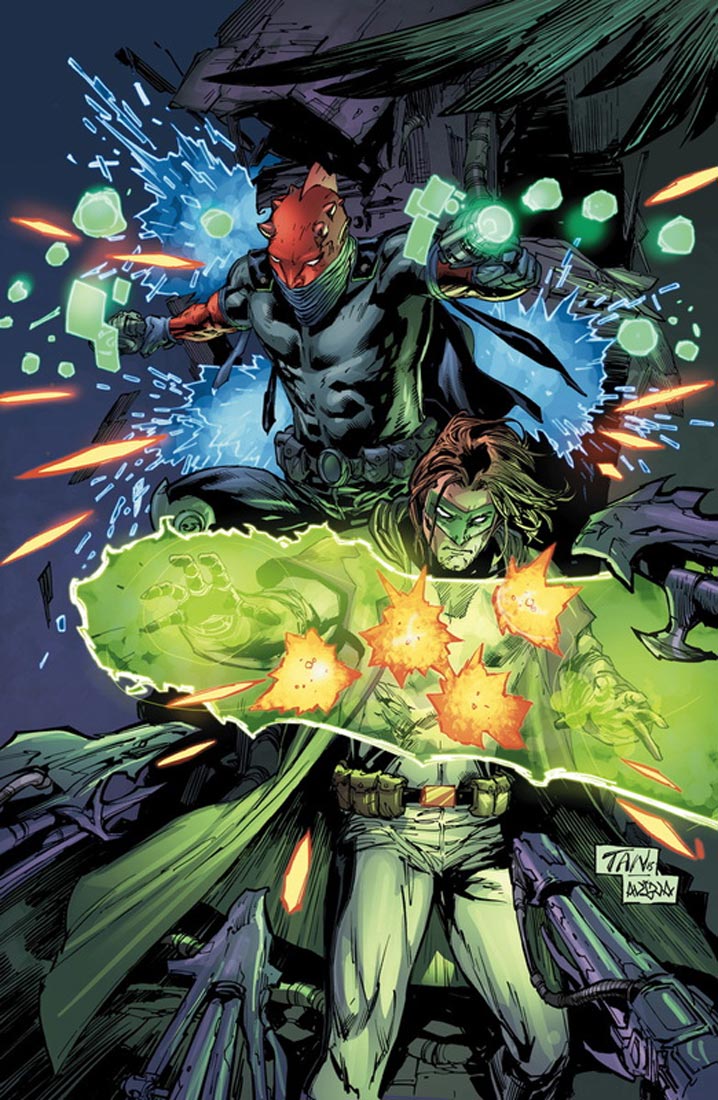 MSG: And we’ve seen in the last two issues that the gauntlet he’s wielding works very differently than the ring. How do you make that, and the environment, come across visually?

RV: The gauntlet is a big missing piece of continuity. It’s something that showed up in the War of the Green Lanterns, so there was already a design for how it looked. But as far as how it works as a mechanism to create constructs, it was really about thinking about what it is. We know it’s a prototype weapon that ultimately leads to the more refined ring, so how would a prototype work?

We also know from when Guy Gardner wore it that it is vastly more powerful than a single ring, so how do you approach that visually? A couple of things we came up with was that the standard aura around him when he’s got the ring on would be more of a fiery, much more powerful aura. In terms of the constructs he makes, there’s a bit of unpredictability because the interface with the user’s mind isn’t as clean as the ring’s. There’s an element of almost subconsciousness to it. The gauntlet will render constructs before Hal even realizes exactly what he wants.

The way that those render comes out of Hal’s background and where he comes from. If we see a cable car, it’s going to be a cable car from Coast City that he would have seen growing up. He creates constructs that might be an animal he’s familiar with.

Mark Irwin: Every time that I ink anyone — especially someone like Billy who I haven’t inked in the past — I’m constantly learning what works and what doesn’t. Billy [Tan] draws tech, aliens, and outer space a lot differently than Doug Mahnke did on Green Lantern. It’s just a different approach. Sometimes it requires different tools, depending on what the page has. 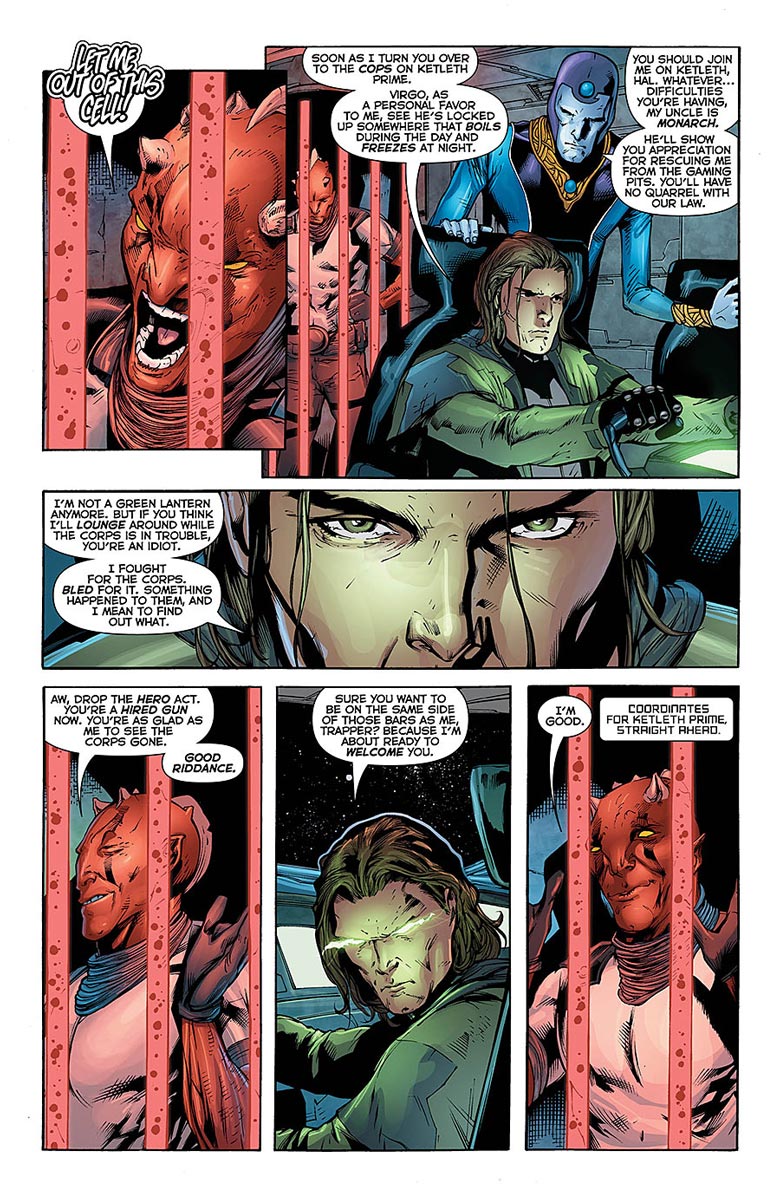 My job is just to enhance everything that Billy does, to make it cleaner and prettier. This is true especially with the tech stuff. Billy does a really nice, organic tech. You’ll see that in the space ships in #42. They’re really organic looking and have a unique shape to them. That’s Billy’s design, but it’s my job to make that readable so people will automatically get the gist of what he’s creating there.

And just doing space in general is super-fun. It requires a whole different thought process in how I approach something, especially when it comes to halos and separating blacks from outer space. For me, it’s been a fun unique challenge.

MSG: How did Hal’s look evolve for you?

MI: For me, I’m so used to inking Doug Mahnke and Patrick Gleason’s work on Green Lantern, and they both have a similar approach to the character: the typical Hal Jordan that we all know with the short hair, domino mask, and all of that kind of stuff.

So, having Hal now with long hair, the duster, the backpack, and his power constructs and halo — all of these things are different than the way we portrayed him before. It’s pretty exciting. Hal looks a lot more like me now! 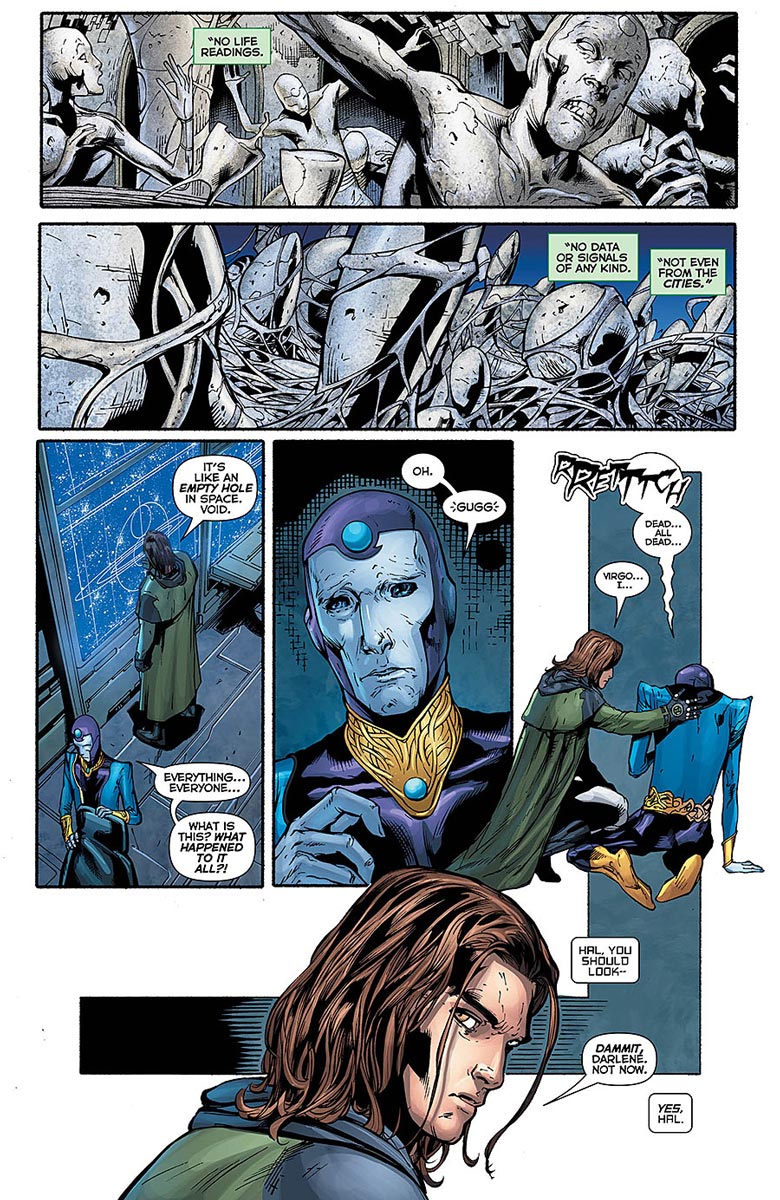 MSG: And it’s not just his look, but there’s a big difference for Hal in being a cop versus being a mercenary.

RV: Yeah! He’s still a hero, no matter whether he wears a uniform or not. His current task being dictated by the universe is to be an outlaw and a villain potentially, but we as readers know he’s still a hero. He’s the type of character that’s going to stick to his core principles and be who he is, no matter what.

He took it upon himself to sacrifice for the sake of the Corps, but now that the Corps has vanished, there’s no police force in the universe. Hal’s pretty much the last man standing, trying to go around and help people and be a hero where he’s needed. But it’s a big universe and for much of it, he appears to be the bad guy.

He’s the kind of guy that if there’s one single life standing in front of him, and he can save that life, he’s going to do that every single time. We’re going to see him pushed to his limits and stretched thin, as he tries to face all the conflicts that are coming at him.

MSG: Even though the Corps is gone, Hal’s not alone, is he? He’s starting to pick up this group of other people. Can you talk a bit about developing that cast of characters?

RV: Sure! We’ve got three so far. One is Darlene, which is the name of Hal’s ship. She’s an AI who was mistreated by the ship’s previous owner. She doesn’t like the idea of having to listen to her new owner because of that, but what the pilot says goes. Her programming dictates that, but she’s not very happy about it.

The two additional members are Virgo and Trapper. They’re not people that Hal expected to keep on his ship for very long, however. Virgo is a royal who was kidnapped by Trapper and his followers to be sold on the open market for bloodsport. Hal rescued Virgo and took Trapper into custody, so that he could drop Trapper off onto Virgo’s homeworld for punishment. But when they get to that world, the entire planet has been wiped out and is a wasteland.

So now you’ve got this guy on your ship in Virgo who may be the last member of his culture’s entire existence, and Trapper who is a hardened criminal. They would probably knife each other in the back the first chance they get. So what does he do with them?

Because of who he is as a hero, Hal’s not going to abandon Virgo or kick Trapper out of the airlock into the vacuum of space. That’s not who Hal is. He has to come up with a solution to these problems. We’re going to get into Hal and Trapper’s relationship pretty deeply in #43 and #44, where Hal comes up with a pretty interesting way to deal with Trapper. 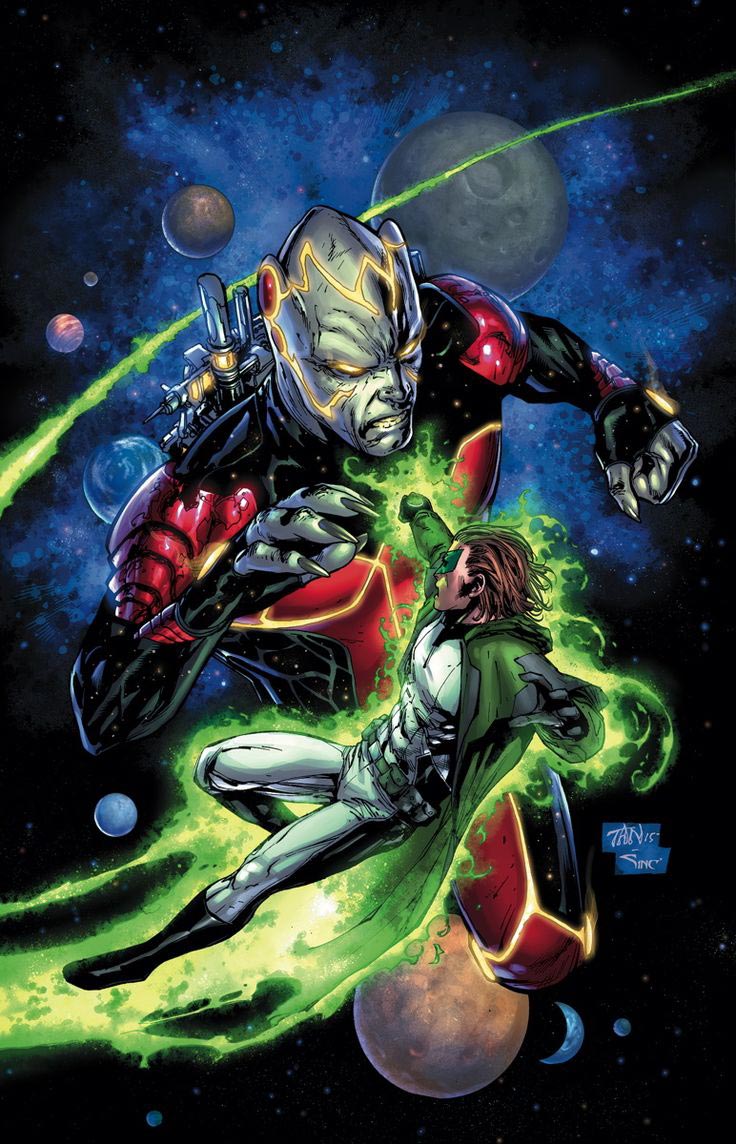 MSG: Another thing that came up in issue #42 is the end page reveal of the Black Hand! What can each of you tease me about what’s coming up with that character?

RV: Black Hand is somebody who’s historically very important to the Green Lantern mythology. He’s a really fun character and really interesting to write. He’s totally insane and totally creepy, but there’s also other stuff that ends up making him pathetic. We’ve seen him before, but we haven’t seen this power yet.

In Godhead, when Black Hand awakened a section of the God Wall, some of the creatures there started coming back to life and Black Hand’s arm started getting crusted over with source wall material. This is the new part of him that he’s trying to deal with.

It’s a lot of fun to come up with a ton of new concepts, and we’re going to be doing that in the next few issues. But it’s also fun to take characters that have traditionally known Hal only one way and pitt them against Hal in this totally new way.

MI: And just illustrating Black Hand in all his unique insanity is always fun. He’s a great character who’s fantastic visually. I’ve had the opportunity to ink him from when he was resurrected all the way to today. He’s hilarious, but hilariously frightening at the same time.

The latest issue of Green Lantern, #42 from DC Comics, is in stores and available online now.