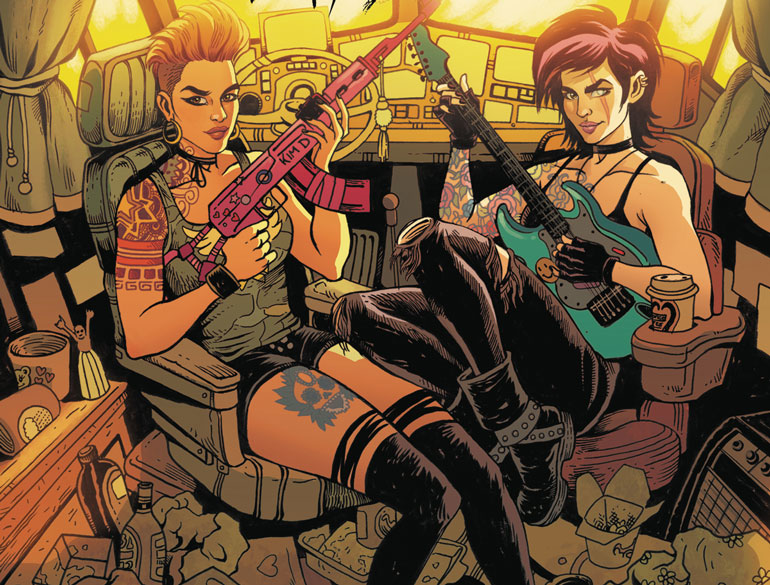 The fighting Kims are back for another round in the upcoming Love is a Battlefield. After the events of This Glamorous, High-Flying Rock Star Life, this astronomical duo has spent some time playing the bounty game and they aren’t quite who they were when we first met them.

Kim & Kim writer Mags Visaggio and artist Eva Cabrera were kind enough to let Comicosity into the inner world of the upcoming volume of the Eisner-nominated series. Things have changed for our planet jumping protagonists, and these creators have promised to deliver a different kind of story for and a new perspective into the characters. 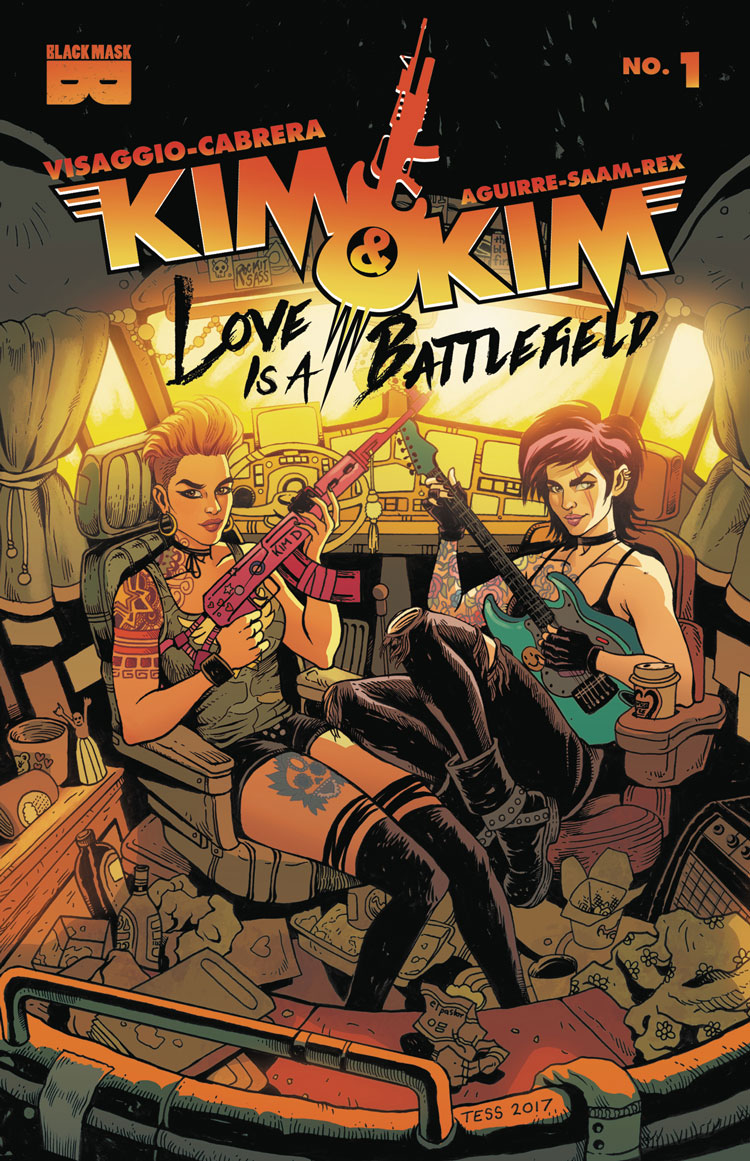 Allen Thomas: It’s been a while since we’ve seen the interstellar and interdimensional Kims! What’s it feel like to have a new story for them?

Mags Visaggio: The Kims are my babies and it’s actually kind of weird writing them again, because this plot rests so much on heavy emotional baggage. The big thing for me with this book was that I wanted to make it worth the wait, so it needed to feel big enough to justify eight months between the last issue of volume 1 and the first issue of volume 2.

But all the same, it’s been exciting spending more time with them! I didn’t know I’d ever get to do more, so when I finally got a look at the completed first issue to Love is a Battlefield, I got super emotional; they’re here. They’re back. And my god, they’re so grown up!

Eva Cabrera:  Ever since Mags showed me the script I fell in love with the characters; four issues were not enough I thought, I wanted to know more about them, about their adventures, they’re awesome and it’s great to draw them now that they are back. 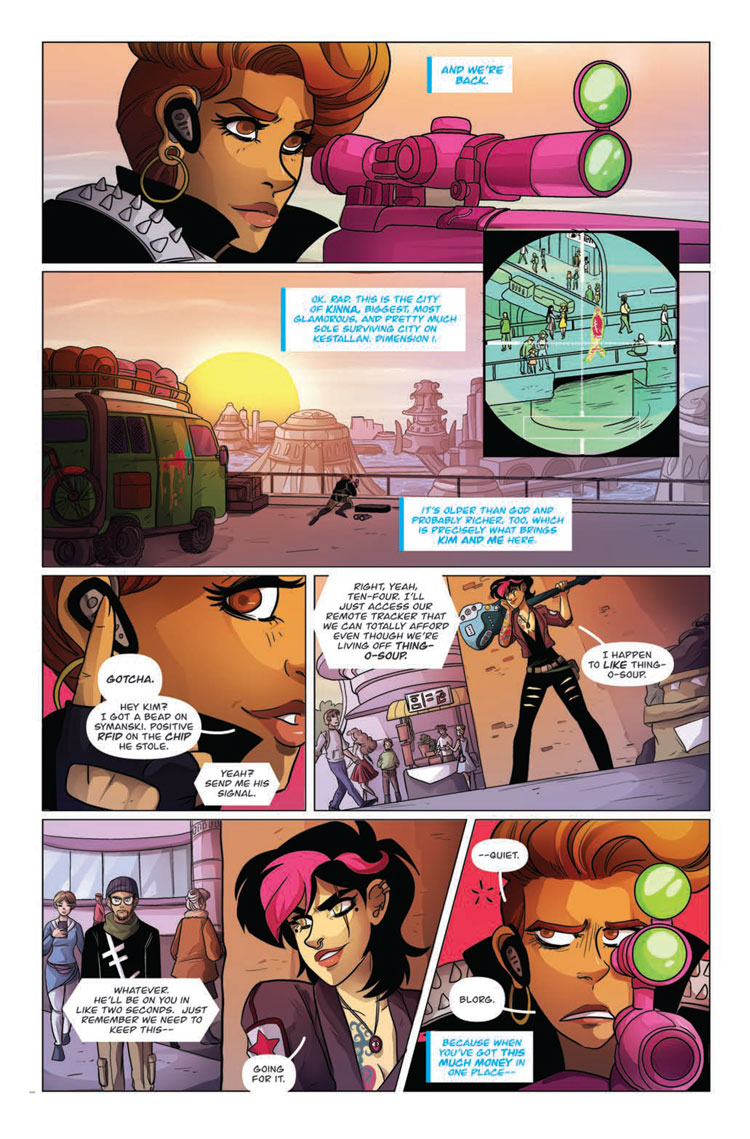 AT: What has changed for Kim D and Kim Q as they start their new adventure?

MV: They’ve come a long way since the end of This Glamorous, High-Flying Rock Star Life! For one, it’s been about three years since the end of that volume, so we made a point of aging them up. They’re better at what they do, and the book immediately sets itself apart from its predecessor by opening with them successfully catching and turning in a bounty head – the sort of thing they spent most of the first book failing at.

They’re still partners, and they’re still mostly living out of their flying van, but they’ve matured a lot. Kim Q is still reckless, but it’s less likely to end in disaster because she’s leveled up her skills. And they’re also both a lot more likely to assert their needs, which brings out one of the core conflicts in the volume.

Kim D is becoming more and more conscious of her limitations and her desire to be more of an adult, while Kim Q is working on resolving a lot of stuff in her past, especially her relationship with Saar. But they’re both still kinda shitty people, pretty emotionally closed off to themselves, really only ever vulnerable with each other – which is harder to do because they’re more likely to question the other’s choices.

Basically, they’re getting toward pushing thirty and trying to not be children anymore.

EC: The girls are more conscious of their lives, they surpassed difficult obstacles (in particular Kim D and her relationship with Laz), this made them return stronger and driven, even though sometimes they get stuck in funny situations, they are still the Kims that we know. 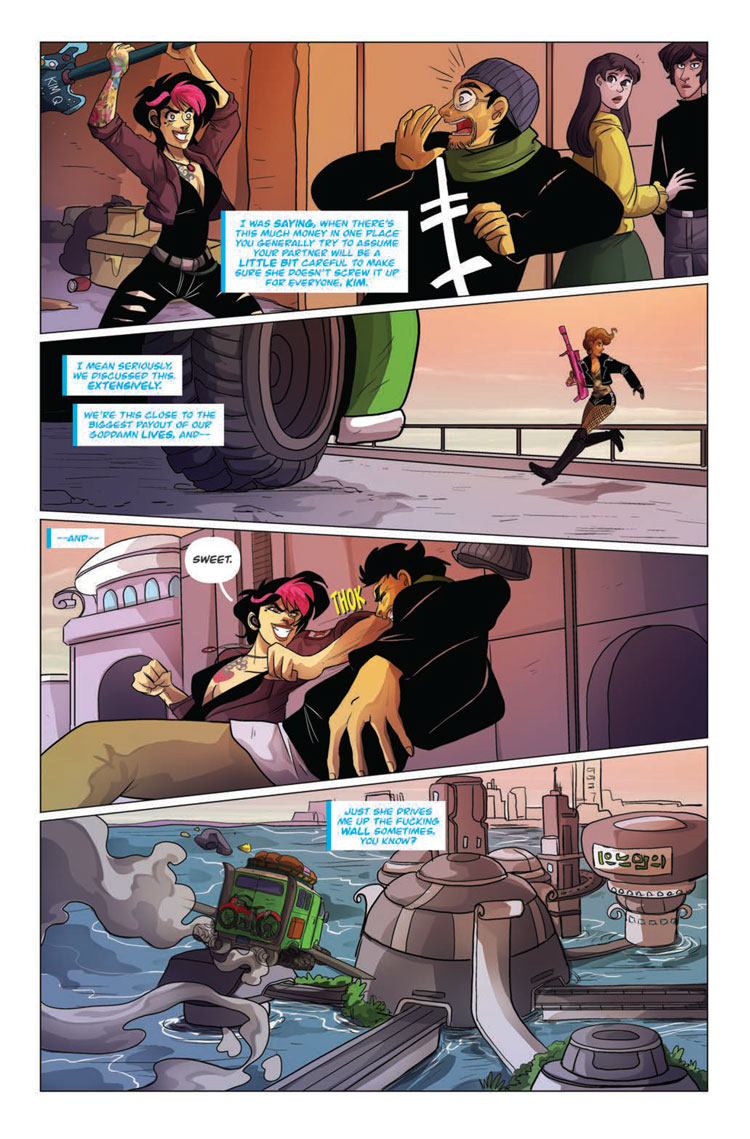 AT: Eva, what style and influence do you hope to bring to the series for the second volume?

EC: Since they’ve grown up, I’ve moved away from the previous rich colorful style, Kim Q’s hair is now black with few highlights and Kim D looks extremely sexy with her new haircut and dark clothing. It’s been three years so I created a more mature style for them — of course, without losing their spark.

AT: How did you both work together in crafting this narrative and its world?

MV: I gave a lot of suggestions for the visual direction of both the older versions of the characters and the landscape. Unlike Vol 1, which is kind of a travelogue, Love is a Battlefield takes place entirely on one planet, so it needed to have a lot of personality, to be visually memorable and well thought-out.

I spent a lot of time developing the history of Kestallan, and I even had my friend Kirsten Thompson work out a dialect of Spanish for it, Kestallanu, which all the signage is written in. I basically suggested that Kinna, the main city on Kestallan, needed to be primarily composed of artificial islands and visually needed to draw from the architecture of Final Fantasy 8 and Kamino from Attack of the Clones.

EC: Mags told me about her idea about the new landscapes, the language handled and the references. From there, I was able to visually invent the cities and locations that mesh with the entire Kim & Kim concept that we have worked on from the beginning. 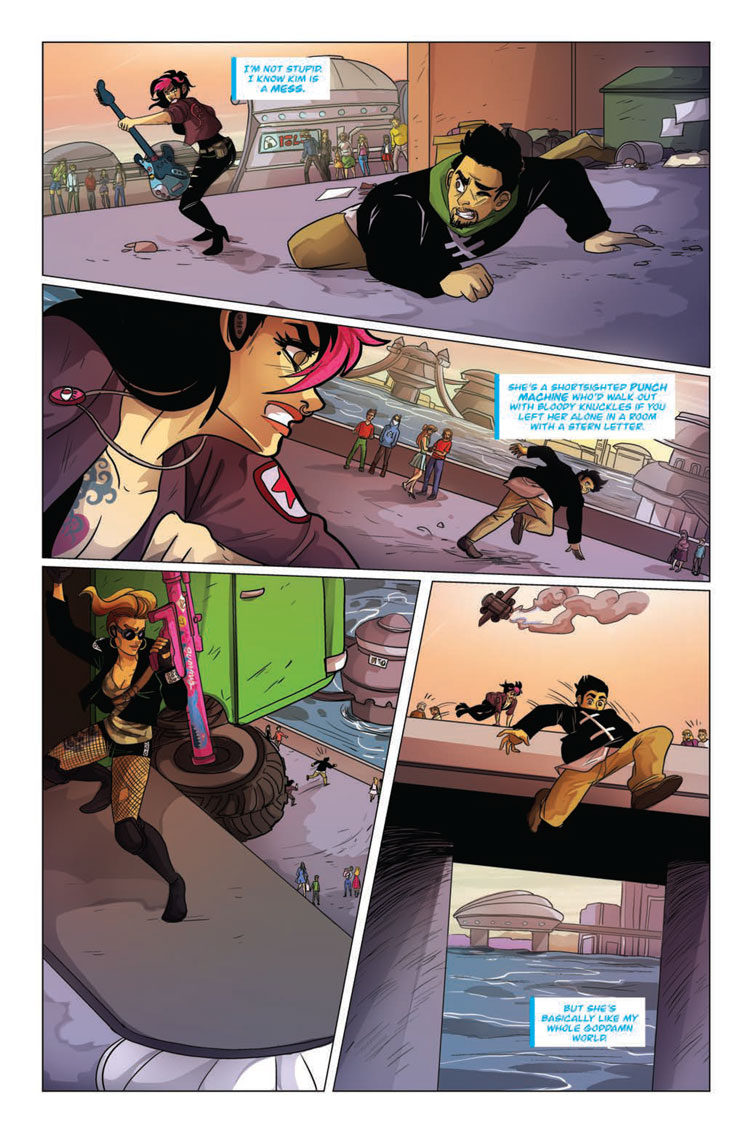 AT: Mags, you’ve promised to amp up the queer in this second round with the Kims. In what ways do we get to see that in the writing and through Eva’s art?

MV: Kim & Kim: Love is a Battlefield revolves largely around Kim D’s toxic relationship with her ex-girlfriend Laz, which feeds a lot into the ambiguous nature of the Kims’ relationship, too. Without giving away too much, Kim D used to date this girl named Laz, who lives on the planet they’re visiting. Five years before the events of LiaB, Laz bolted in the middle of the night, never to be seen again.

We learn over the course of the volume that there’s a history of this not being a super healthy relationship, but so much of the plot is driven by Kim D’s lingering feelings for her, which is going to force the Kims to take a long hard look at their relationship to each other, and hopefully draw some conclusions about it. So this is a story that’s entirely rooted in a same-sex relationship that isn’t idealized or even particularly healthy.

EC: I think it’s wonderful how Mags describes in a very natural way the relationships of this story, even being of the same sex one can easily identify with the emotional challenges the characters have and to be able to bring those to life with my illustrations and do emphasis to their ideas. I think she has been able to get the audience to believe and (in cases) identify with the characters. 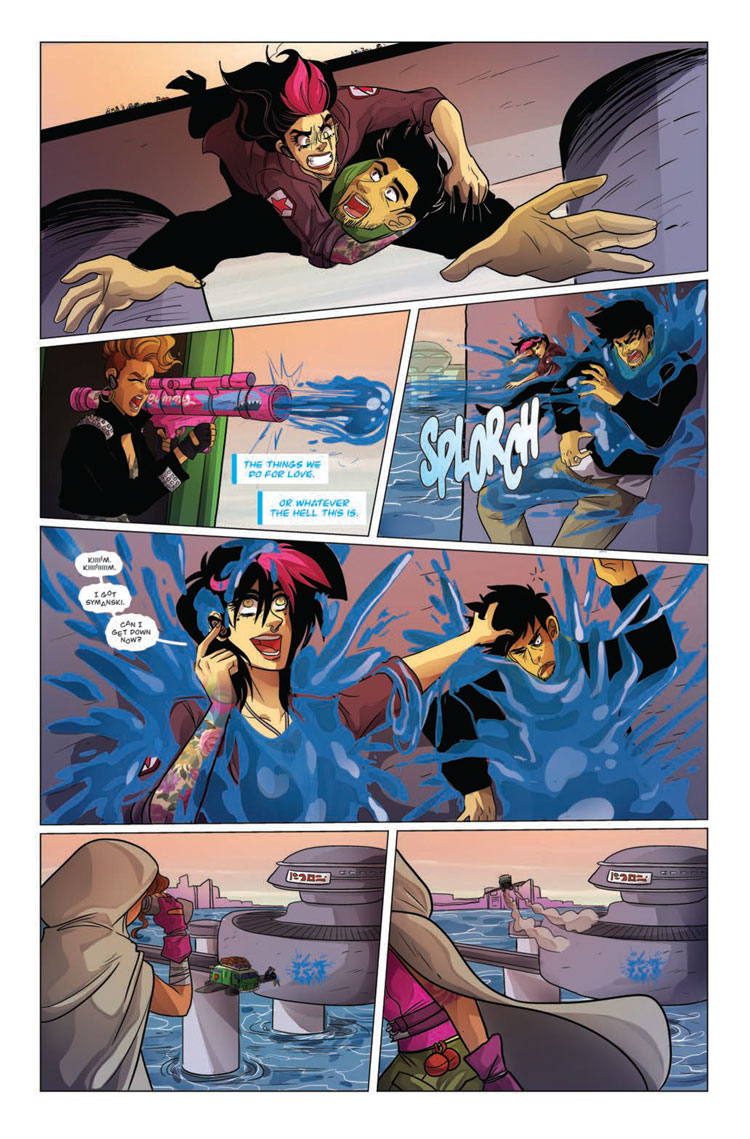 AT: Is there something you didn’t get to do in the initial Kim & Kim run that you do in Love is a Battlefield?

MV: The Kims have some real conflict between them in this book. In volume 1, because we were meeting them, it was important to me to always show how supportive and affectionate they are for each other; I couldn’t break the status quo just after establishing it!

Readers needed to see that the Kims’ love for each other isn’t conditional, and that they’re always the first to rush to the others’ side in support. Love is a Battlefield breaks that pattern a good bit because both of them are making bad choices the other can’t defend.

EC: Yah! To know more about the relationship between Kim Q and Saar. I love how they look together, him always protecting her even if Kim gets annoyed

AT: What are you both excited to show readers in the story?

MV: That the Kims are capable of growth! Volume 1 is deliberately a “no learning, no hugging” experience; the book ends with them in the same place they started. Volume 1 is all about failure. Volume 2 is about recognizing that sometimes you can’t avoid being hurt or hurting others, and figuring out what that means for you.

EC: The development of the girls; what’s in their heart and minds and all what they are capable of achieving; they are strong women that have big hearts, their friendship is tremendous and even on their more pressing moments, they will always have each other. 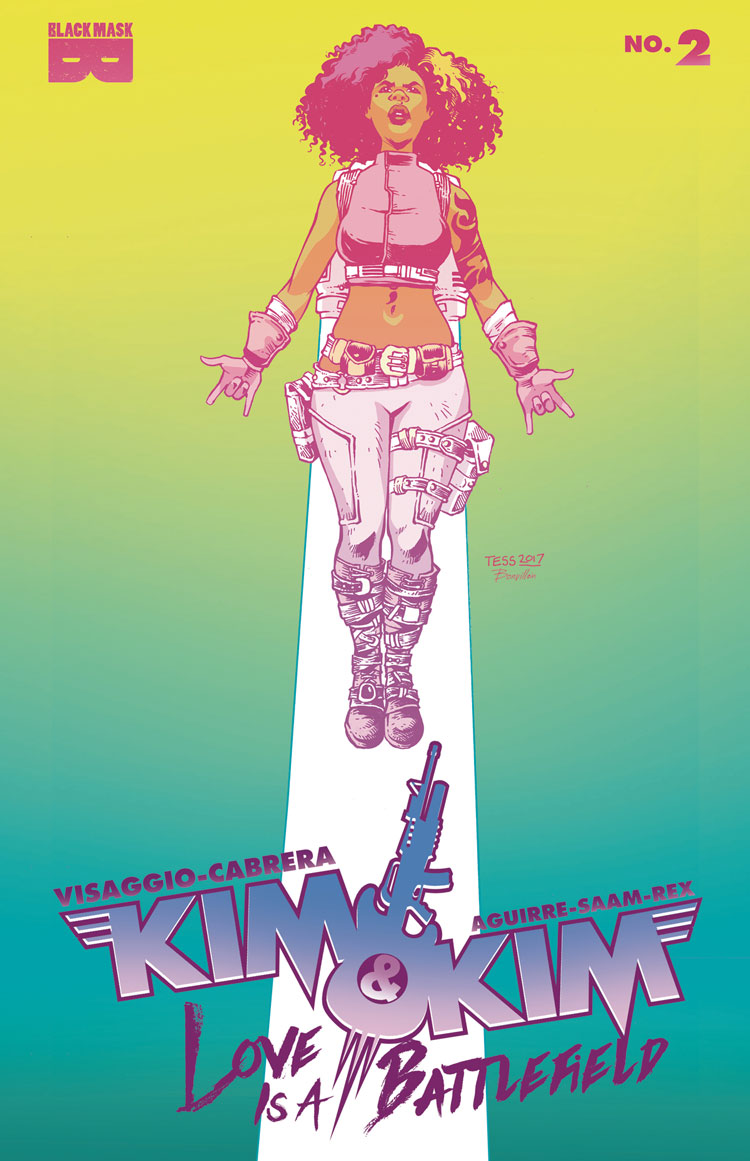 MV: I’m so grateful I’ve gotten the opportunity to tell another story about my babykims with this extraordinary team of women (also Zakk [winky face emoji]). They’re all a joy to work with, and I’m very lucky to be able to be here again. It feels like coming home.

EC: To have been able to know and work with Mags, Katy, Claudia, Zakk, Matt and all the people that help make this comic possible has been one of the greatest things that I’ve been able to be a part of in my life. To our beloved readers that love the story so much and granted us the Eisner nomination, it’s been truly an incredible time and I want everybody in the world to know about Kim & Kim.