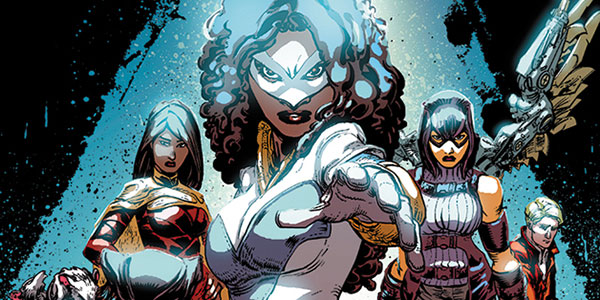 One of the most unique series to hit DC Comics’ New 52 is The Movement, a book focused on a ragtag group of revolutionaries — bridging many ethnicities and sexual orientations — taking on the corrupt leadership of a small town called Coral City. Key to this book’s harsh, real world feel has been the pencils of Freddie Williams II, an artist whose illustrious credits include Robin, Captain Atom, Green Arrow, JSA All-Stars and the Flash. Freddie generously took time to answer a few questions about his involvement in creating new heroes for the 21st century, what it takes to make a hero seem realistic in the context of The Movement, and why he wanted to work with Gail Simone. 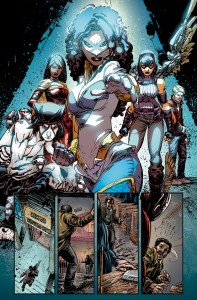 Matt Santori: Congratulations on the new series, Freddie, and thank you for taking time out of your busy schedule! Can you tell us a little bit about how you were approached for The Movement and what attracted you to the project?

Freddie Williams II: My pleasure. I was approached at the beginning of 2013 by Joey Cavaleri (DC Comics editor). He called and asked if I would be interested in working on a project with Gail Simone, since that has been a goal for mine for years. I said “YES DEFINITELY,” even before I knew much about the project. After I learned more about The Movement, I got additionally excited, because so much of it was up my alley, with settings and topics that are relevant and interesting to me!

After that Gail, Joey and I had lengthy email conversations about the overall tone and direction of the book and what its goal was. Gail also sent me a bunch of history and background work that she created for the world of Coral City, and what seemed like these fully formed characters. I was very impressed by how fully formed in personality and history they were. I started on a series of character designs, and everything snowballed from there.

MSG: Creating new characters for the universe has clearly been a big push for DC this past year, and it’s already clear that the ones you’ve developed for The Movement have touched a lot of people personally. How did you go about constructing the looks for each hero so they would reflect real life but also fit in with the greater DC Universe? 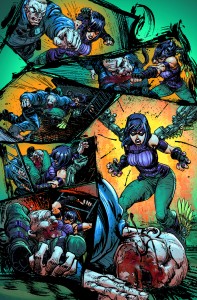 FW: It’s important to keep a supply of new characters coming in and out of the DC Universe, so that you don’t get the same patterns emerging all the time. That sort of thing already happens enough in comics, but by having new dynamics of new characters it helps to shake things up.

When I was thinking about the visuals for these new characters, one of my main concerns — and a concern of Gail’s — was to allow these costumes to feel “realistic,” meaning the type of costume somebody could create from clothes they had around the house. Clothes that would not take some sort of super-seamstress to create. So, we avoided spandex or impossible fabrics, and after I established eternal motifs for the characters (design elements/motifs that help to portray the character in a visual sense), I just started thinking about what current popular styles could feed into that — and how I could retrofit, and layer, and augment them to get the look that I had in mind.

The character Katharsis was probably the most difficult because she has those elaborate mechanical wings on her back, but we were trying to picture something that a skilled mechanic could create in a garage or something, and that maybe it looks like it was made of engine parts and scrap.

MSG: You got the opportunity in issue #2 to bring Rainmaker back to the DCU. How do you balance what people loved about a character before and bringing in new influences and a fresh take? 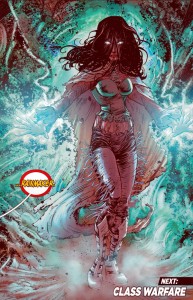 FW: Most of the characters in The Movement are on the ground level. I want them to feel like they could live in the real world, like a part of their costume is the dirt, and the suet that would come from being in a big postmodern, postindustrial, corrupt city. With Rainmaker I thought about traditional Native American clothing — not a stereotype, but I wanted to connect together the leather and fringe is she sometimes wore in Gen13 and also make it a bit contemporary. That also gives her a lot of fabric that could move around whenever she’s using her powers, just to make her look cool.

MSG: Do you have a favorite character to draw in the title and what attracts you to her or him in particular?

FW: I do not think I could narrow it down to a favorite character to draw. I enjoy drawing Virtue quite a bit because I like the challenge of getting into the mindset of a 17-year-old young lady who is strong and commanding, but is also in her teen. It’s just a fun challenge to take on.

With Vengeance Moth, after I discovered that there was a real person who almost embodies her (we didn’t pattern Moth after anyone, but she ended up being striking similar to someone we met at SDCC 2013), I’ve had renewed enjoyment drawing her. I’m now thinking of a flesh and blood person whom I’ve met and spoke to that seems to fit the character so well.

Lastly, Katharsis is one of the most fun characters to draw. Gail described her as a “Conan type” of character and so I want her to be powerful and rude, but beautiful – with the rawness of her character and how blunt she is. Plus she’s got that big ol’ sword. 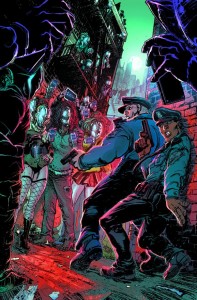 MSG: The Movement also features real people in prominent roles, especially police who may or may not be on the right side of the law. What about your style on this particular book do you think reinforces that idea of the moral grey?

FW: Visually, I try to add some sympathy to the characters, even if they are generally cast as a “villain.” So, even a character like Whitt (the corrupt police officer), who overall conducts himself deplorably, still has some positive nature to his background and to his personality. This is achieved by trying to make their faces and their bodies very expressive, but not always make them look stiff and rigid. It’s difficult to describe, but you attempt to act through the characters — sometimes they’re strong, but sometimes even a strong character is portraying something weak inside of them.

Also I’m trying to mix some of this the type of work that I did on Robin, which had youthful fun elements, mixed with the grit and the shadows that I experimented with on Captain Atom and Green Arrow, and I’m having a blast doing it!

MSG: How has it been collaborating with Gail Simone on the title, and what do you feel she brings to this type of book that’s unique for the market? 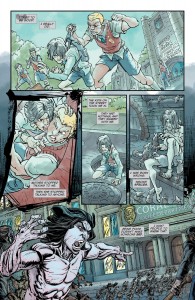 FW: Gail is great, no doubt. I have wanted to work with her for a while, and this experience has proven to me why I’ve heard such great things about collaborating with her. Gail has the ability to do characterization like no other writer I’ve worked with.

Even new characters seem fully formed whatever she writes them, like they have this long history that has led them to this point in the story. They are characters formed in a way that usually takes years of continuity in comics to get a feeling with. That’s a rare thing to find.

Whenever I receive a new script, I read it a few times to get a feel for it. Then I will often take a pass through the script to see if there’s any “re-pacing” I can do to make things pop more… make them more exciting, make the scenes flow better. However, Gail understands pacing and flow in story so well that her scripts are usually structured perfectly! I mean that as a huge compliment. It’s so tight, and well paced and well structured that even with my fresh pair of eyes looking at it, I cannot find often find any way to make it more exciting or pop more. She’s really just damn good!

That being said, Gail is very open to suggestions, always willing to hear my comments. It’s a great working relationship! 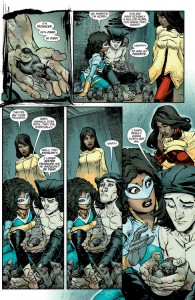 FW: Last words are always difficult to think of, because you want them to be cool and memorable…

Well I guess if they’d like to if the audience would like to check out my Facebook and follow me on Twitter, both of which I post a lot of artwork on, as well as announce the conventions I will be attending. Also, I have a YouTube page, where I answer questions about the behind-the-scenes of creating comic books.

Lastly, although The Movement is the primary project that I’m working on, please check out my website for a list of side projects and other books and covers I’m working on for DC Comics, Dark Horse, IDW, and others! Thanks again!

Freddie Williams II is the ongoing artist on The Movement from DC Comics, and his work can be found at http://freddieart.com.