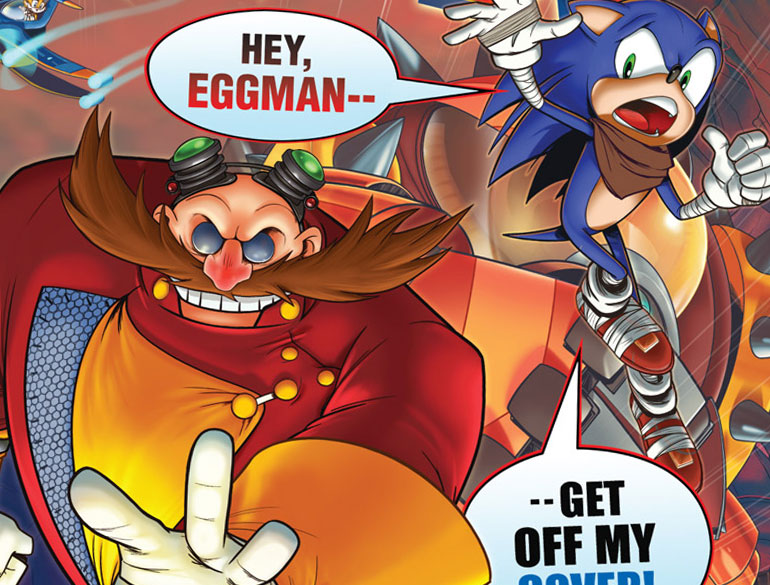 For nearly 25 years, Sonic the Hedgehog has been speeding across one screen or another to delight fans of video games, TV, and comic books. And now, there’s more Sonic than ever with the new Sonic Boom animated series and comic book from Archie Comics. In a rare treat, this March both of those interpretations will be shepherded by the same writer: Bill Freiberger. We sat down with Freiberger to get his take on this new version of the classic character and find out what it’s like to jump into the comic world with both feet (and a tail)! 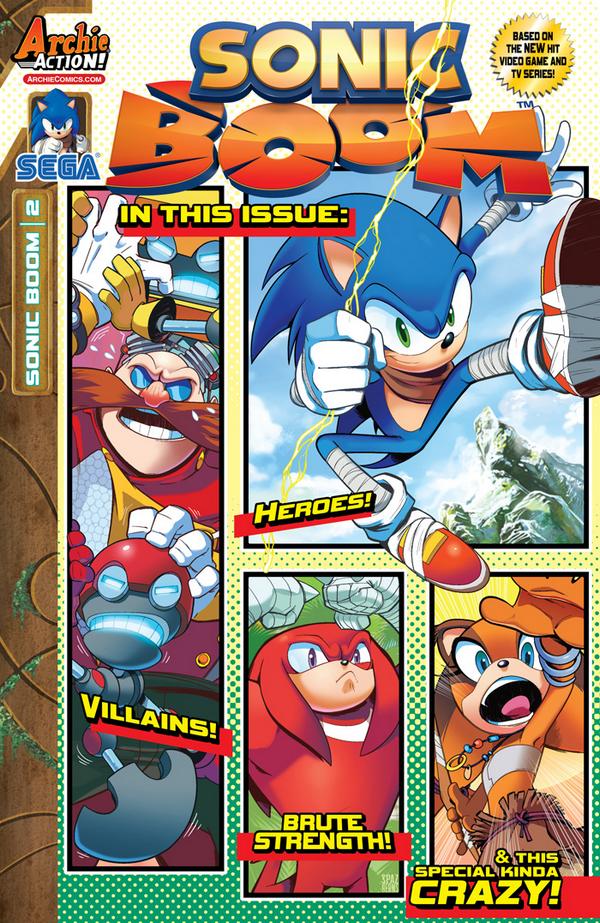 Matt Santori: Thanks so much for taking time out to answer questions for the multitude of Sonic fans at Comicosity, Bill!

What has it been like developing Sonic stories for an entirely new generation of readers, viewers, and players?

Bill Freiberger: It’s been a lot of fun. The thing that keeps a property like Sonic strong and vibrant over a long period of time is having it interpreted by different creators.

The best example of this out there is Batman. You have the original comic book, the 1966 TV series, Dark Knight Returns, The Animated Series, Tim Burton’s movies, Batman Beyond, Christopher Nolan’s movies, The Brave and the Bold… the list could go on forever. Some people may love one version over another; others will hate a version for straying too far from “canon.” But new and different versions keep the character fresh and in the zeitgeist.

The same is true for Sonic. All of us at Sonic Boom are working to bring a fun and unique version of Sonic to a new generation of fans. And while doing that, we still want the show to have appeal to everyone who is already a fan of the franchise. There’s no reason to simply redo a version of Sonic that’s already been done. Those shows already exist. You can rent a DVD or buy back issues of the comic book (which goes back twenty years). The fun here is coming up with something new and interesting. 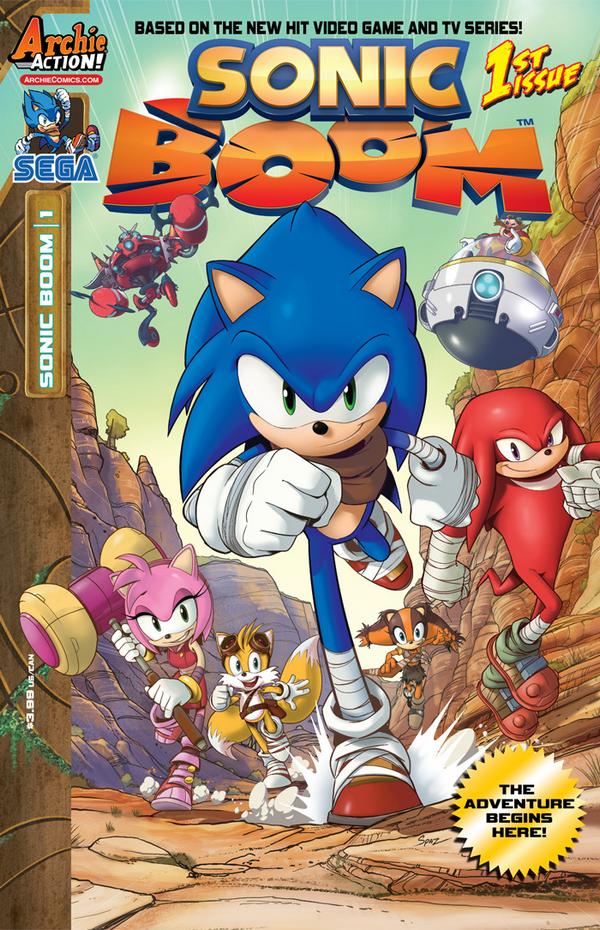 MSG: Has there been things about the mythology of Sonic the Hedgehog that you’ve deliberately shifted or changed for this new series — both on television and in the comic?

BF: There have been a couple of things in the Sonic universe that we haven’t dealt with. But that doesn’t mean we won’t. In fact, the only thing that we’ve deliberately stayed away from is Sonic collecting rings and/or using rings as some sort of currency. That was done because it seemed like such a gaming-specific thing that we felt it pulled people out of the show. We do, however, occasionally make a joke about collecting rings, but it’s not really part of our universe.

Another element from the mythology that we’re dealing with very “judiciously” is how Amy feels about Sonic. In our show, we’ve hinted at the fact that Amy has romantic feelings for Sonic, but she’s not obsessed with him. She’s not crazed. But everyone knows it’s there, just below the surface… even Eggman. In one of the episodes, he comes out and asks, “Hey Sonic, bro to bro, what’s up with you and Amy?”

And when we don’t play things up, we’ll still hint at it for the fans. In a recent episode, we refer to Knuckles as “the young echidna from Angel Island.” Even though we have no stories planned that include Angel Island, we wanted to acknowledge that that’s where Knuckles is from.

The thing to remember is that although this is a new version of Sonic, it’s still Sonic. So, just because you haven’t seen something or someone doesn’t mean you won’t. 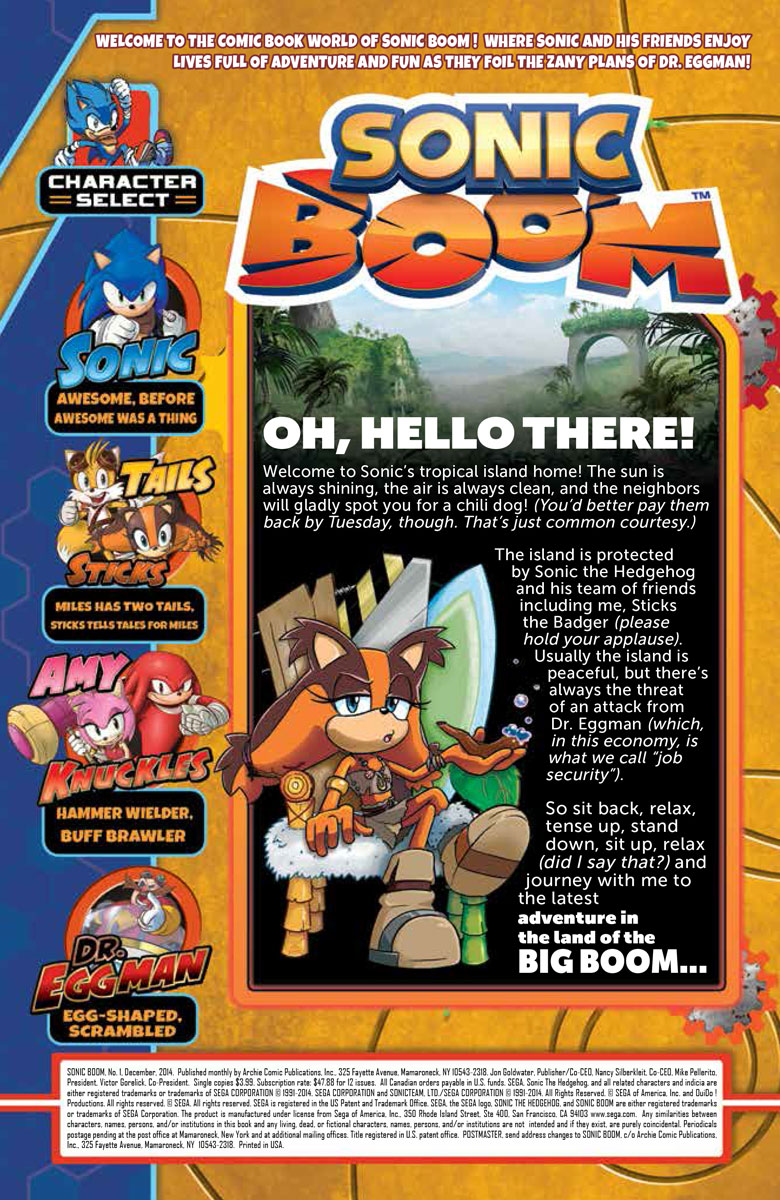 MSG: How has the transition from writing for tv and writing for the comic been for you, and how do you think about them differently, if you do?

BF: Comic book script format is a pain in the butt! There, I said it.

Other than that, they’re both forms of visual storytelling so a lot of the basics are the same. A good story is a good story. You figure them out the same way. They need to come out of character and have great twists and turns along the way. And, since the show and the book are comedy, you need great jokes as well.

There was one difference between the TV and comics that was a problem for me… I’m basically a comedy writer, so I’m basically a word guy. As a result, my first draft had way too much dialog. Paul Kaminski, the editor at Archie, told me that if we kept in all the dialog I’d written there would be no room for pictures. A rewrite solved that problem, leaving room for Steven Butler to do his thing.

MSG: One of the big pluses to the Sonic Boom series is that it’s a true ensemble book. What are your thoughts going in regarding how the characters work together and bounce off each other?

Having a true ensemble, means that the characters bring their unique abilities and points of view to the story. They sometimes disagree about how to proceed. For example, when Sonic is out of the picture, Knuckles and Amy argue about who is in charge. Naturally, they both have very different ideas about what leadership means. 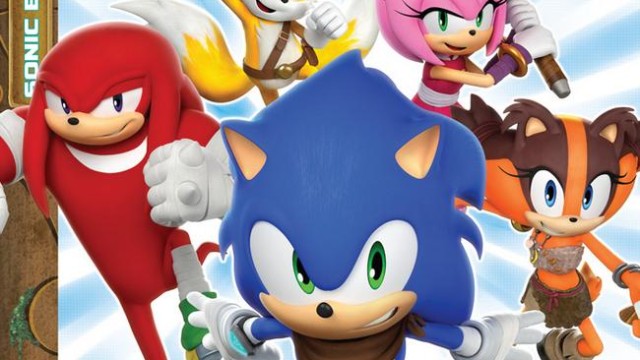 Another dynamic that comes up often is Sticks’ crazy ideas about how the world works and Tails’ reliance on facts and science. That, combined with Tails’ inherent optimism and Sticks’ generally suspicious nature, causes a great deal of bickering.

On top of that, we have competition between Sonic and Knuckles.   And of course, there’s always a bit of “SonAmy” just below the surface.

But, when there’s a problem at hand, the team puts aside their differences so they can defeat their current adversary and get back to bickering. 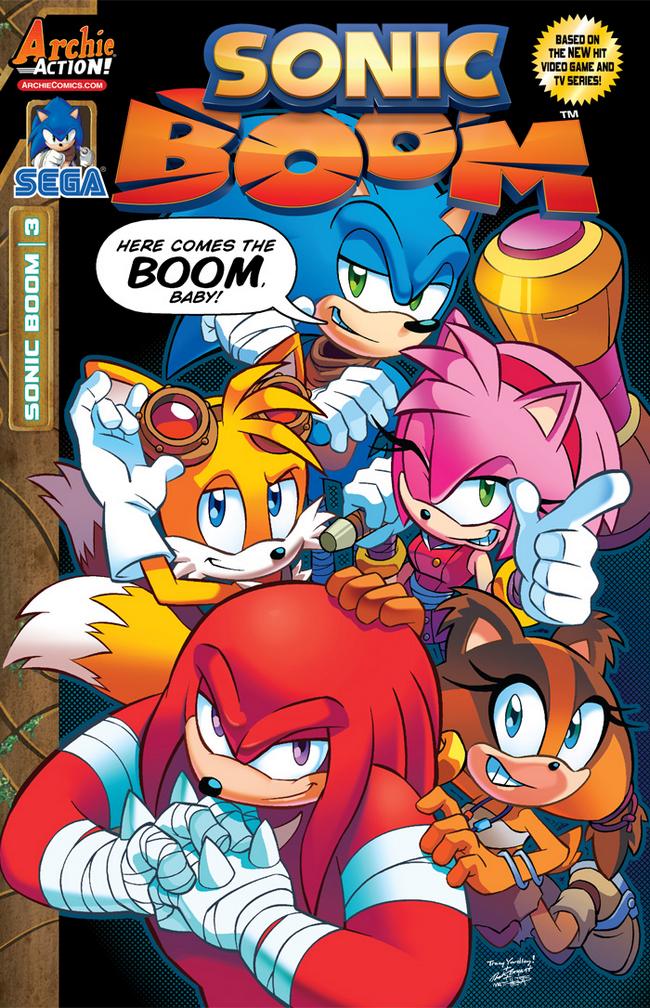 MSG: Sticks is an entirely new cast member for the Sonic Boom series. What was the impetus in creating her and what do you think she brings to the mix?

BF: Sometimes when referring to a work of fiction, you’ll hear the phrase “Author’s Message” regarding a speech or bit of dialog. Well, Sticks is very often delivering my message. She most represents my point of view and belief system. That’s why she’ll say something seemingly absurd and, by the end of the episode, she’ll be proven correct.

In my opinion, what Sticks brings to the team is a healthy dose of cynicism. While the others generally have traditional hero’s personalities, Sticks is more of an anti-hero. She’s kind of like a comedic Rorschach from Watchmen.

MSG: Do you have a favorite cast member?

BF: Are you trying to get me in trouble?

Maybe I can dodge a bullet by saying that since I’m the voice of Comedy Chimp and Lady Walrus, I’m my favorite cast member… Although, I have to admit, I’m the least talented of the group.

MSG: How has it been working with artist Steven Butler on your issue?

BF: It’s been a blast. I love the art. So much detail.

I’m new to comic books and Steven has so much experience. So, I’ve learned a lot about the medium from working with him. For example, I had a very specific idea of what the first page should look like. When I saw the art, it was completely different from how I had imagined it. I looked at it for about a second and realized, “of course this is the right way to do it. What was I thinking?”

MSG: Any final thoughts or special teases for Sonic Boom #5?

BF: Wait until you see the two-page spread in the middle of the book. I’m planning to get my copy framed.

And, if you’re in the Los Angeles area, I’ll be doing a signing at Earth 2 Comics on Ventura Blvd. in Sherman Oaks on Saturday afternoon, March 7, 2015. Come by and say hello! 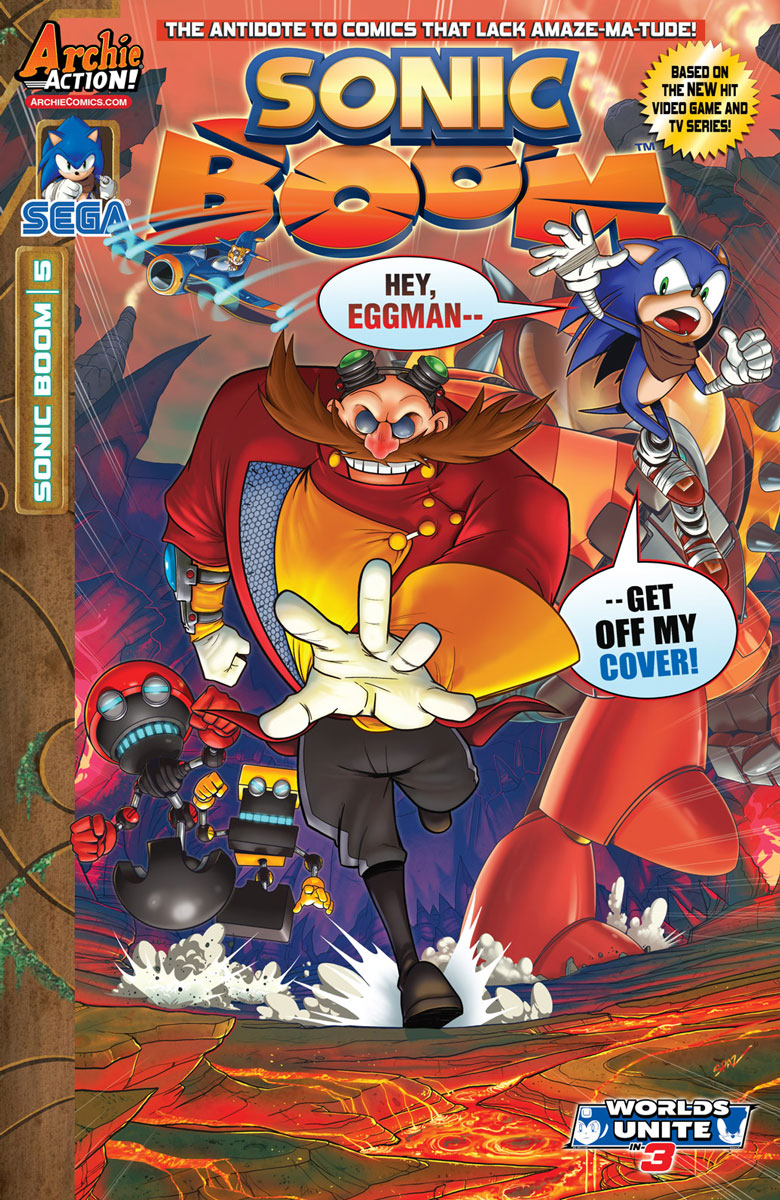 SONIC BOOM #5
SONIC BOOM is your antidote to comics that lack AMAZE-MA-TUDE! The NEW ONGOING SONIC COMIC BOOK SERIES keeps on BOOMIN’ IT UP with Sonic Boom #5: Eggtoberfest! Dr. Eggman’s sick and tired of no one trusting him! How on earth can he take advantage of people if they don’t trust him to begin with?! The answer? Easy—EGGTOBERFEST! Just one small problem: the mechanical master forgot to hire ride operators for his carnivorous carnival creation! So it’s Sonic to the… rescue?! If a good guy helps a bad guy, is that “helping” at all? Ponder this and other philosophical queries in the latest action-packed issue of Sonic Boom, written by Sonic Boom TV Series writer Bill Freiberger! Featuring cover art from Patrick “SPAZ” Spaziante and an X-RAY variant from the newest sonic superstar Diana Skelly!