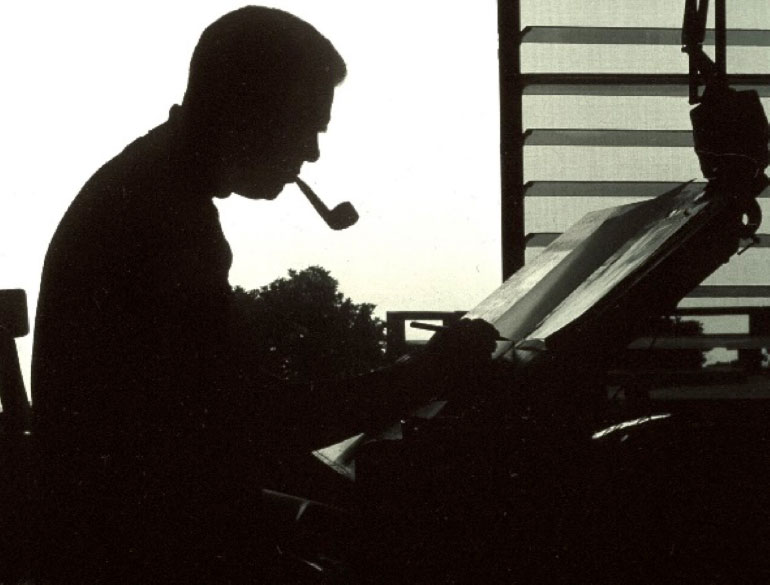 Like so many smug liberal snowflakes, I hate religion. Not that I want to. My inner abyss is as bottomless as a cup of diner coffee. I’d love to fill it with something other than beer and comics. And maybe someday I will.

Some folks have sustained brain damage that made them more religious afterwards, as discussed in tales to terrify such as this New Scientist article: “Neurologists Have Identified Brain Lesions That Could Be Linked to Religious Fundamentalism.”

What if I get bonked on the head and my inner compass starts pointing to prayers and saints and Corinthians and stuff? Aside from eight years of Catholic School that left me with guilt and that Latvian Orthodox episode of Seinfeld that left me with jokes, I’m religion-free and liking it.

So, in case of brain injury or spiritual awakening, I have concocted 9 plausible religions/cults based on the work of Jack Kirby — because I like having options.

Please try these religions at home. Send all tithes to the Jack Kirby Museum & Research Center.

This is the easiest faith to derive from Kirby. As Tom Scioli has said about “The Pact,” which lays out the techno-biblical backstory of the Fourth World, “You could build a religion around this comic.” 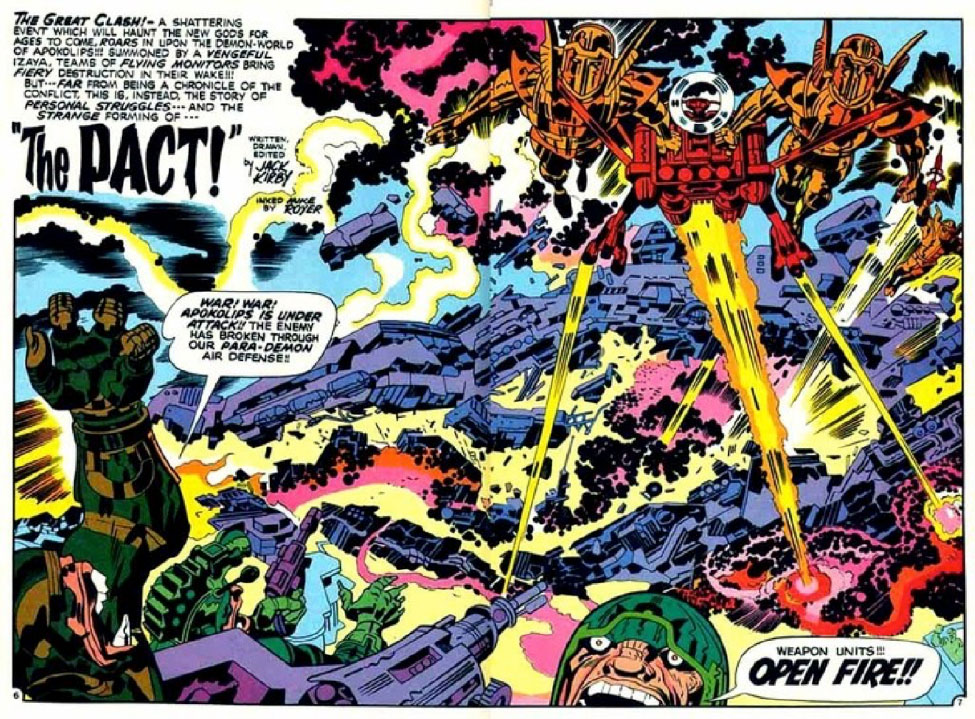 Then there’s the Anti-Life Equation: a flame-broiled McGuffin that puts parentheses around everything hateful.

Best of all, the implied mathematics of the Anti-Life Equation suggest ethics rather than morality, which would put this religion ahead of pretty much all of them. Instead of justifying your petty beefs via insane interpretations of a magic book cobbled together by generations of hacks, avoiding the Anti-Life Equation is simpler.

Does X enhance life or squash it? Does X spread love or hate? Does X increase fear or acceptance? Anything that moves the needle close to fascism and hate and orange tyranny is part of the equation. Amen.

The Fourth World is pretty male-dominated, but it includes some of the toughest female characters in comics: Big Barda and the Female Furies.

It wouldn’t be hard to push Orion and Forager and the other fellas to the side to make Barda the focus of worship. 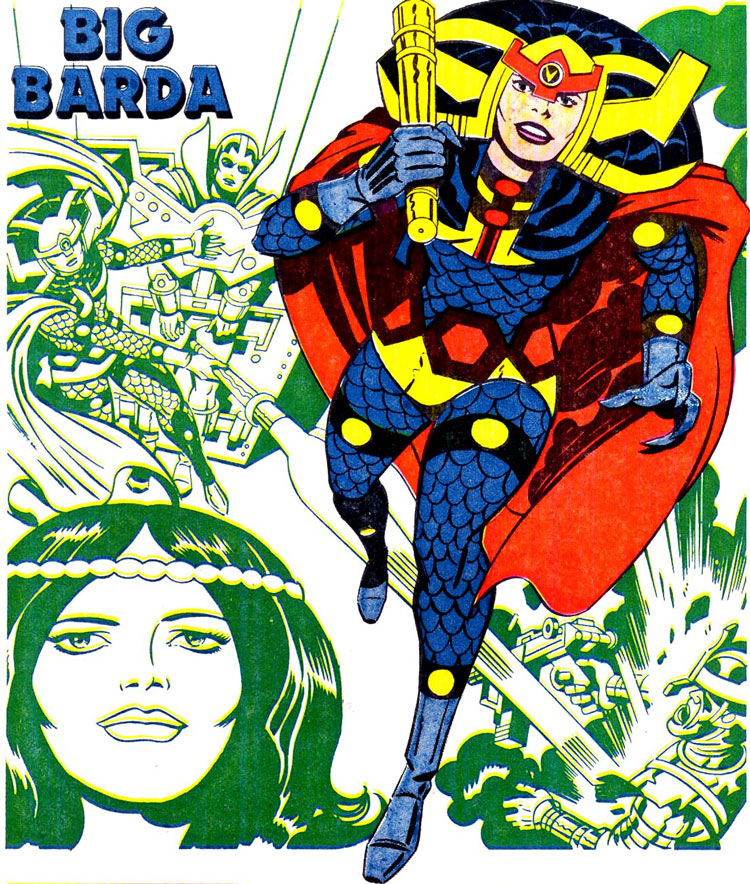 This religion would include some magnificent machinery, which I feel is key to a groovy religion. Big Barda’s Mega-Rod, which she uses to bash bozos throughout the cosmos, is the finest rod in the multiverse. Lashina’s lashes are legendary. Bernadeth’s Fahren-Knife is useful in many situations, from New God childbirth (as seen in Tom King and Mitch Gerad’s Mister Miracle series) to personal combat.

I’d put the blade of Bernadeth up against the hammer of Thor anytime.

This is another easy religion to imagine, what with the Eternals, Deviants, Celestials, and a creation myth that wraps them together like an airtight tinfoil hat.

Plus, if you’re religious for the judgement, whoa nelly, does this religion have judgement.

Massive space god Arishem’s thumbs up or thumbs down is a verdict to be feared, but also to be admired, thanks to Kirby’s bonkers, bodacious art. 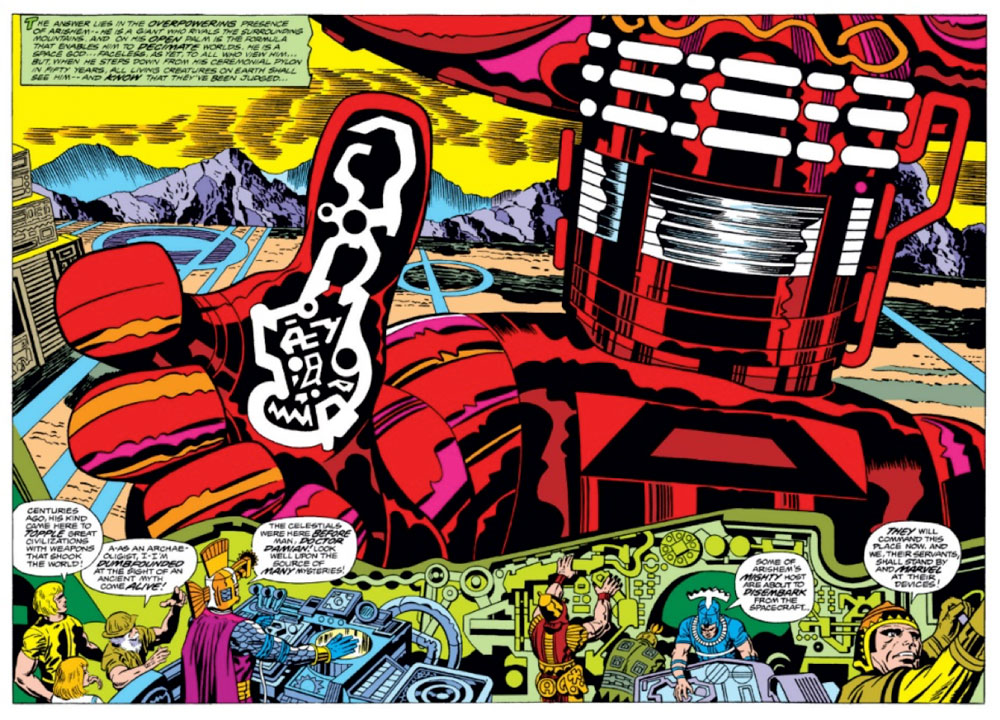 All members of this religion would get that pattern tattooed on their thumbs, as a sign of respect for Arishem’s thumbtastic glory.

Speaking of Thor, Kirby’s version of the Norse myths, mixing science fiction with myth in an exuberant style that informs everything from the architecture of Asgard to the hats of Odin, could end up the most popular Kirby religion, thanks to its influence on the Marvel Cinematic Universe, which puts our podunk cosmos to shame.

Thor: Ragnarok would be the official movie of this religion, which would make Taika Waititi a high priest. 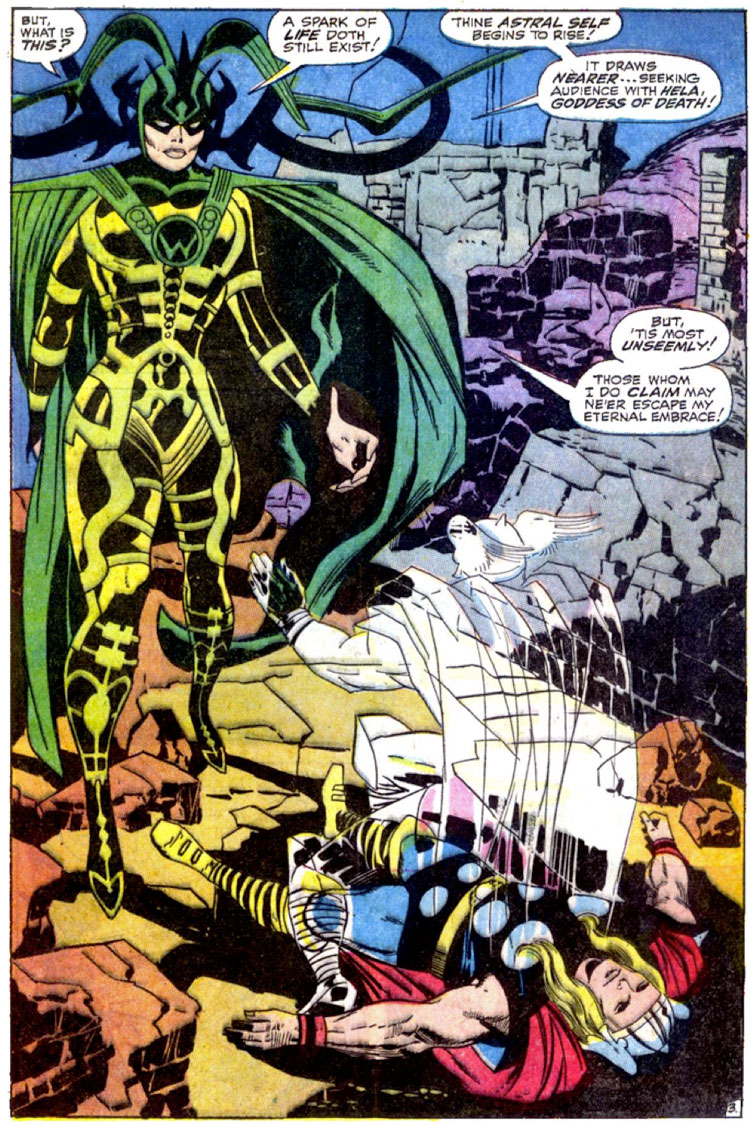 A central tenet of this faith would be: “All Nazis, white supremacists, and other human turds who pervert the Norse myths for their own disgusting purposes are not welcome in this realm or any other. Piss off.”

The followers of the enigmatic EMG cult don’t like to be called a cult, but they do have one fervent and relatable wish. 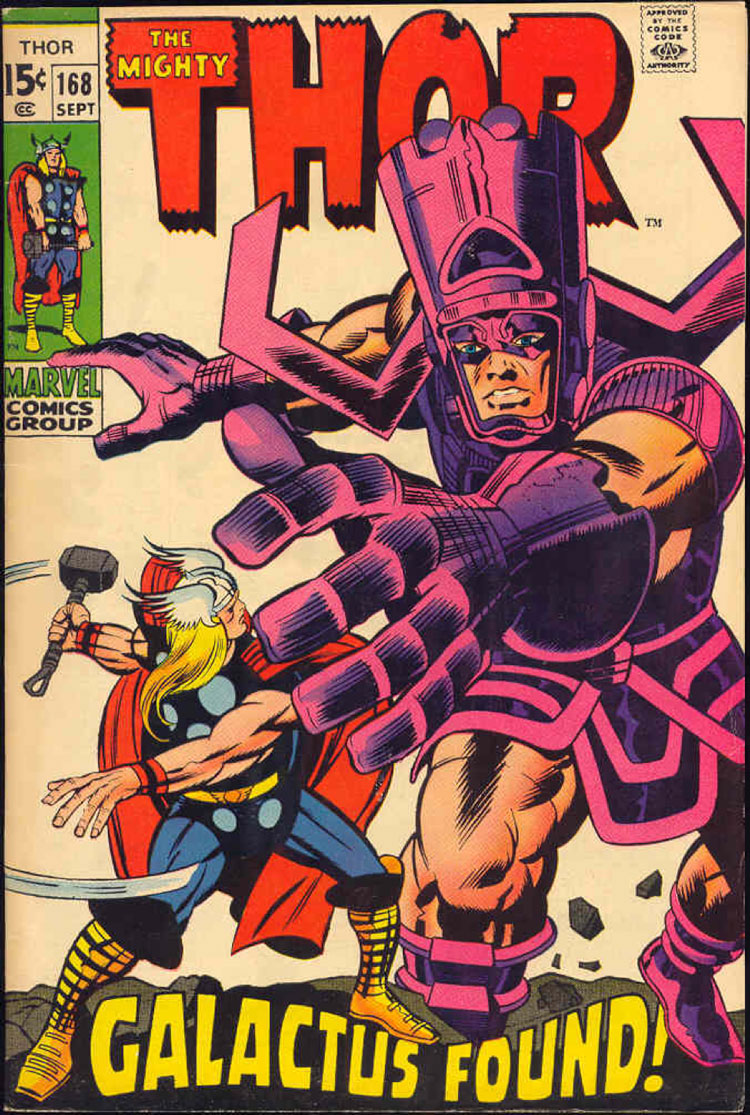 EMGers believe the purple planet-eater is real and hope/predict that we could be his next meal. Works for me, especially after the next Avengers movie, when I’m taking all my suicide pacts off pause.

People worship some weird stuff. Why not Ego the Living Planet? 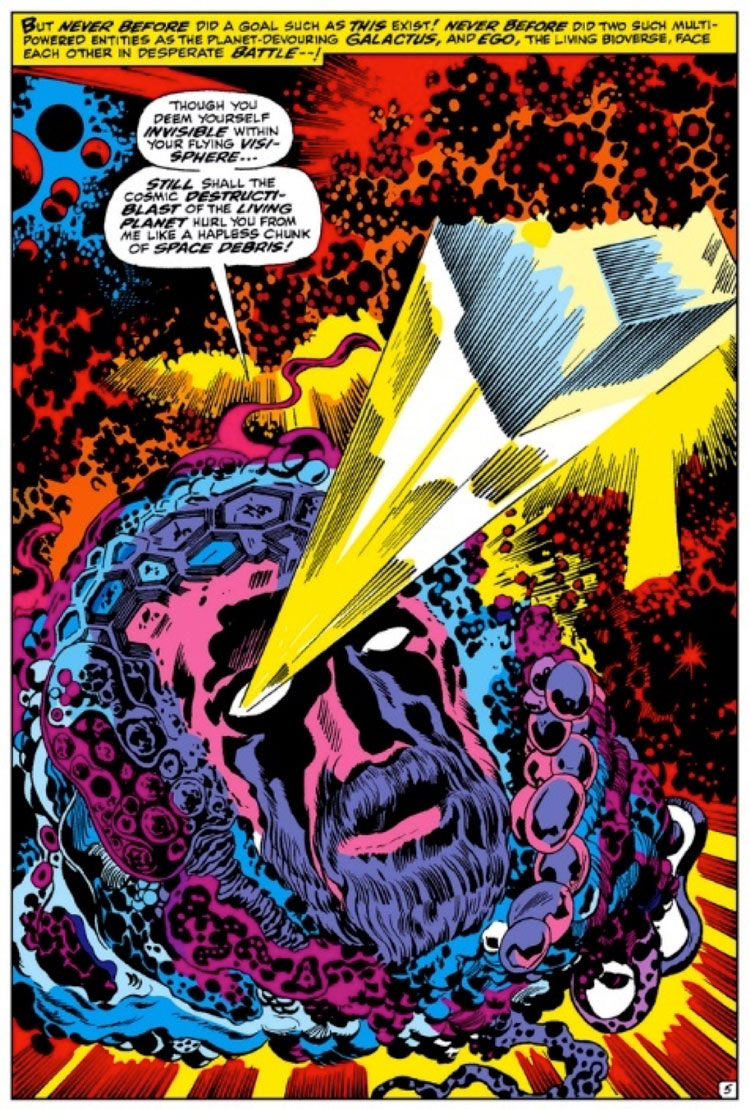 The Kurtzberg Church of Gizmological Ecstasy

Kirby’s machinery (which will be the focus of a future column, true believers) is insane and uplifting. Why not worship it? 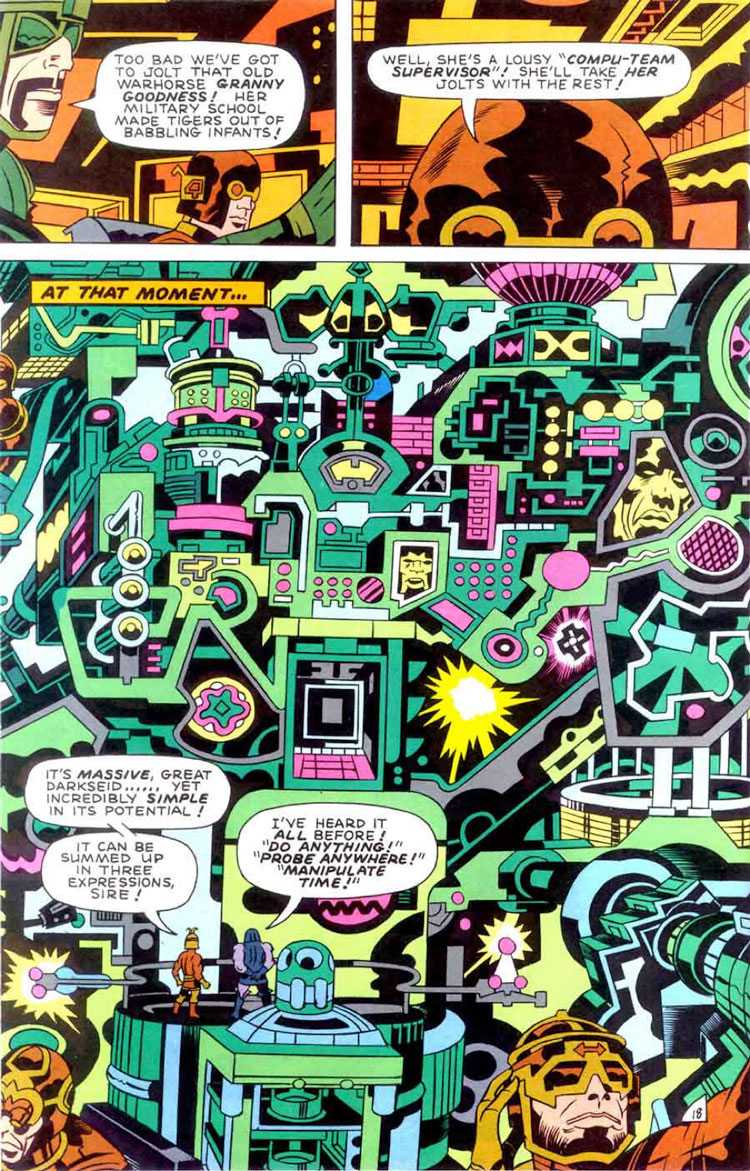 Perhaps this religion would appeal to folks who think we’re going to become immortal by merging with AI into some transhuman, technogasmic successor to humanity. Kirby tech could be just the robo-bootstraps our species needs. 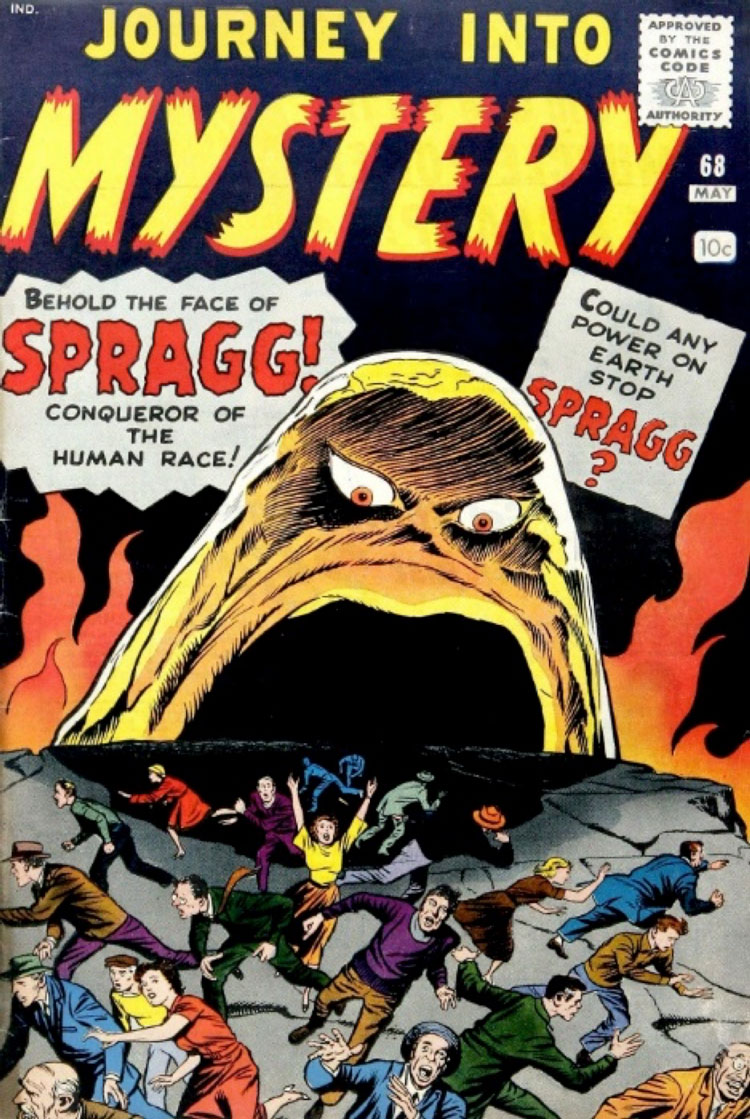 Spragg alone deserves a religion. Tell me the following supplications don’t have a ring to ‘em:

“Spragg grant me the serenity to accept his conquest of the human race.”

I pray to him every time I run out of bourbon or hope.

Oodles of other religions could be assembled from the sacred parchments of Kirby’s long career. I would go to any church devoted to Brother Eye, Captain Victory, Devil Dinosaur, or Paranex the Fighting Fetus. 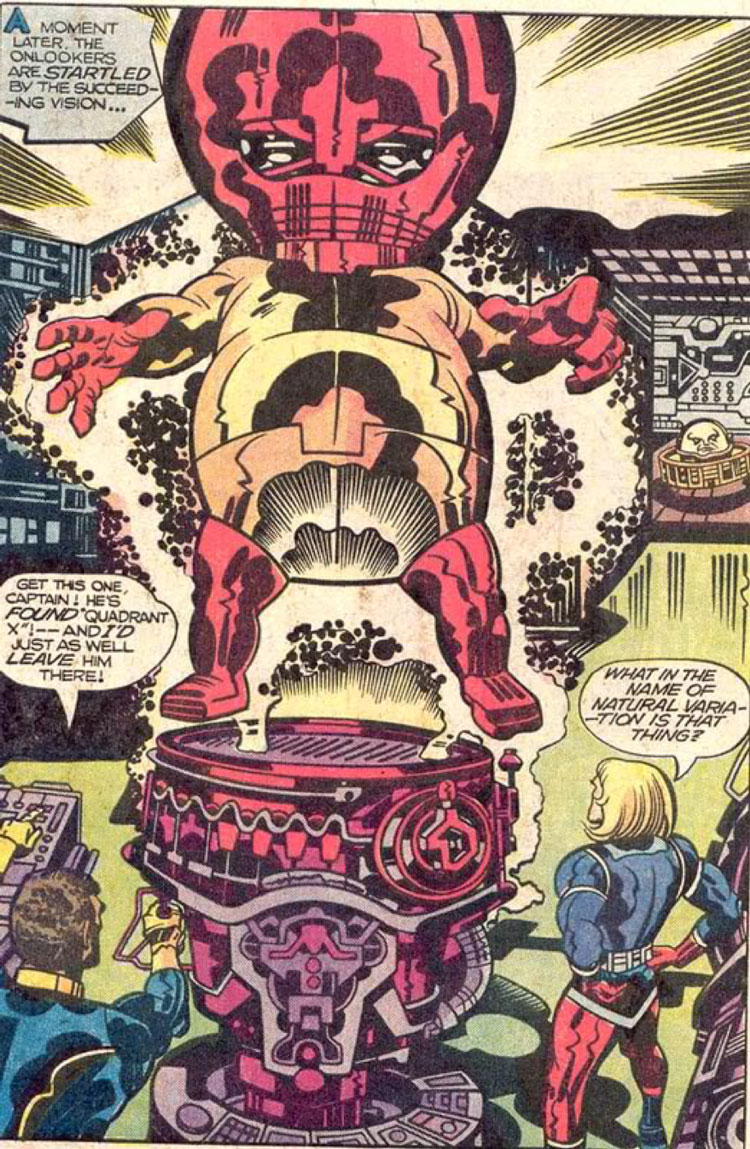 But the most obvious Kirby faith is faith in Kirby himself—and his preposterously inspiring life. 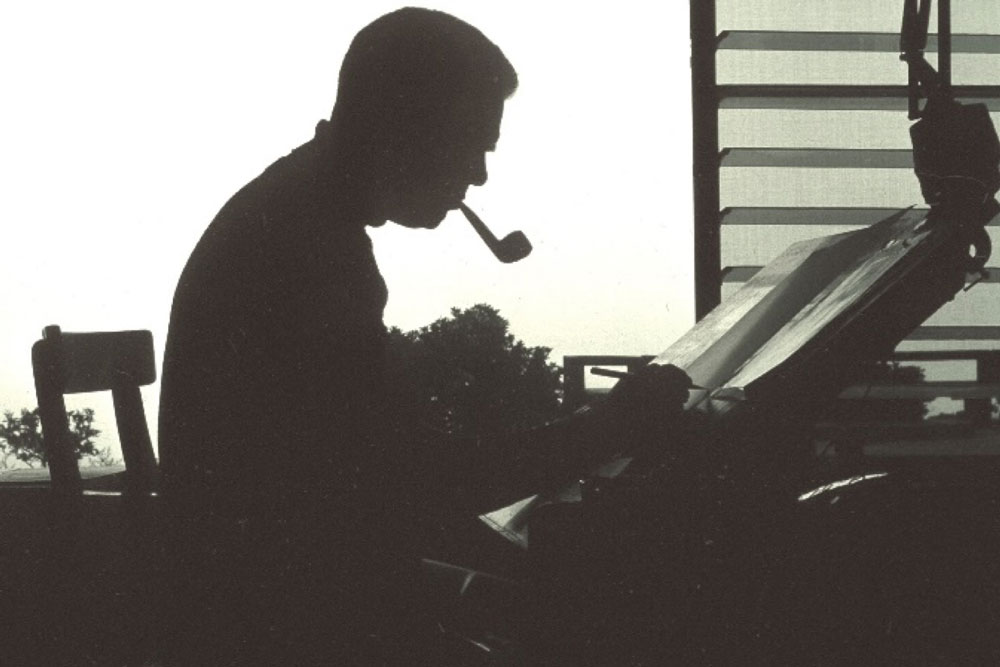 For a man who created more universes, doohickeys, and pantheons than just about anyone, the most important Kirby story might be his own life story. The Kirby bio (which has been told by former Kirby assistant and prolific Kirby evangelist Mark Evanier in Kirby: King of Comics and is unfolding as a comic by Tom Scioli in Kirby) offers lessons aplenty for life.

Here are three commandments of Biographical Kirbyology that are always relevant:

Good rules for living, those.