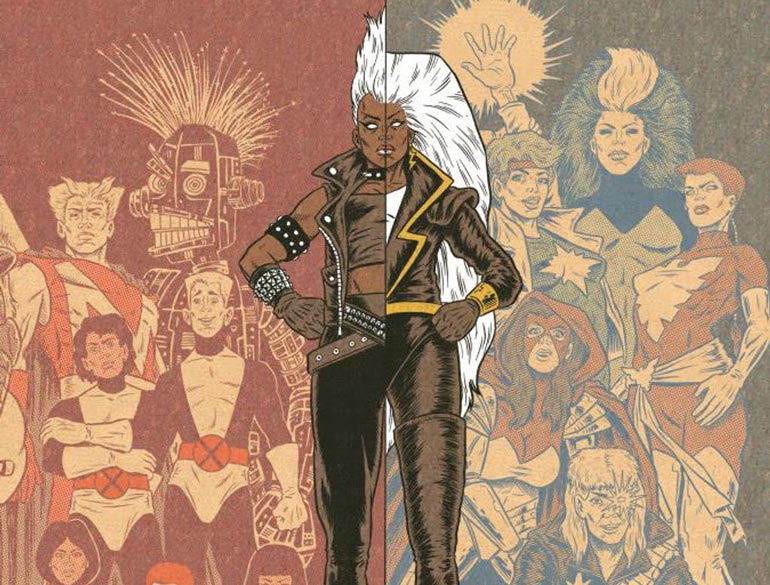 As a wee lad and puny teen, I loved the X-Men.

I haven’t given a mutated shit for decades. Well, the movies are pretty good. But X-Men comics? Eh.

Yet somehow, I am once again geeked beyond reason for an X-Men comic: Ed Piskor’s X-Men: Grand Design, which retells the X-Men saga in the style he perfected on Hip-Hop Family Album, another colorful history.

Today, April 3, the first two issues are being reprinted in the massive treasury style of Hip-Hop Family Album, along with bonus material such as a Piskor-colored version of X-Men #1 (by Jack Kirby and Stan Lee). I recently talked to Piskor about the King, Jack Kirby. 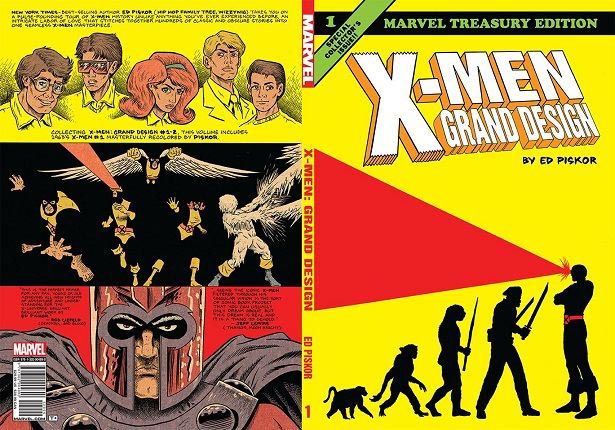 Piskor remembered his first Kirby vividly: a 1990s facsimile edition of Fantastic Four #1, the 1961 kickoff to the Marvel Universe. His second was, appropriately, an X-Men comic: a facsimile edition of X-Men #9, featuring the first Avengers vs. X-Men meet-up and the villainous Lucifer.

I asked Piskor if these initial comics had an impact on him, and he emphatically answered, “A thousand percent. It was immediate.”

At the time, eight-year-old Piskor was immersed in “the manic energy of comics art at the time” with 90s megastars Todd MacFarlane, Rob Liefeld, and Jim Lee ascendant. Piskor liked these comics, but he also liked that “Kirby was completely divorced from that but there was a similar energy with how he would express his line, and I appreciated the cartoony aspect of it.”

Young Piskor was hooked on “…the clarity of the storytelling, the extremely vivid imagination that was far beyond anything else in comics.” 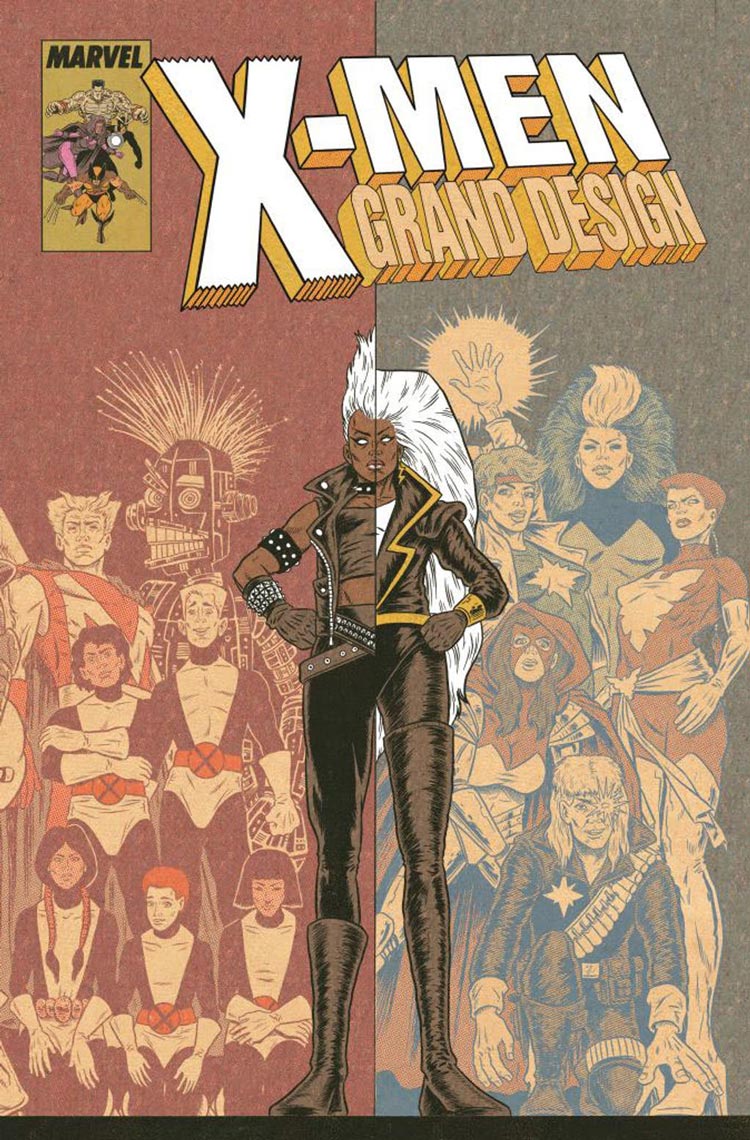 Piskor began going to flea markets with his parents to feed his Kirby habit: “You could get 70s Kirby really cheaply, certainly his Marvel 70s work. You could get that stuff for a quarter or something. But also there was a plethora of reprints that cost next to nothing…  I was buying up Boy Commandos reprints, Kamandi, Panther, 2001. So I became a Kirby fan immediately.”

The early X-Men never struck me as being among Kirby’s better works; I never think of it alongside Fantastic Four, Thor, or the Fourth World as peak Kirby.

Piskor agreed that it’s not Kirby’s best, and he certainly has a valid frame of reference: Piskor says he has read every Marvel Comic from Fantastic Four #1 up to 1998, plus some earlier series such as the pre-Marvel Atlas comics, which produced my favorite cover ever: 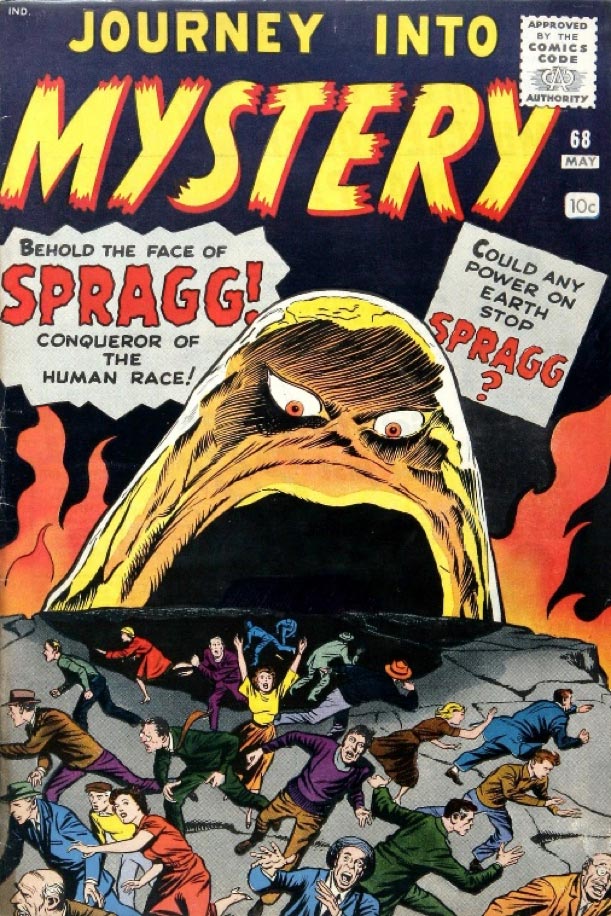 Piskor said, “Then we get Thor and Hulk and all that stuff. But X-Men is clearly created to piggyback off the success of the Fantastic Four. Instead of four guys, let’s have five. Instead of a blonde, she’ll be a redhead. And instead of a fire guy, we’ll have an ice guy. And if you take a look at the old X-Men, Hank McCoy is not this erudite gentle giant smartypants. He is just Ben Grimm with glasses. He’s a big dummy, a big doofus.” 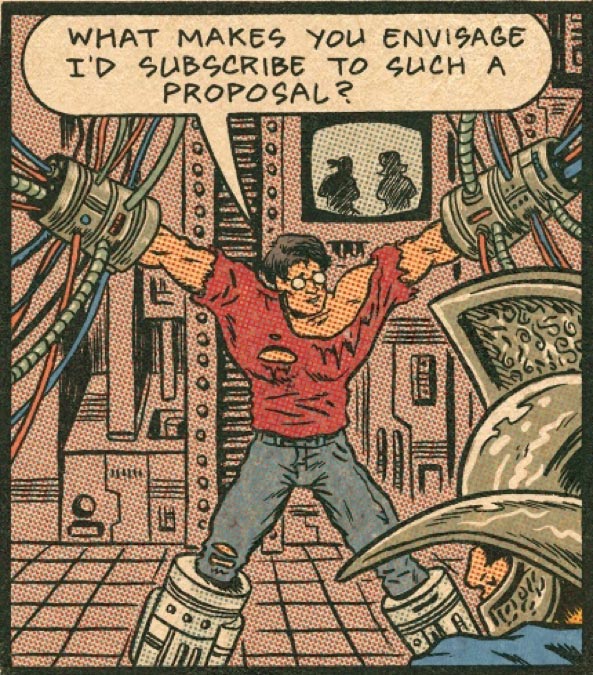 Despite labeling early X-Men as “clearly an attempt for them to catch lighting in a bottle in the same way they did with Fantastic Four,” it’s still Kirby, so Piskor added, “That being said, the storytelling stuff, that’s all there. The Kirby art is all there…. For my tastes, my favorite issue is the introductory issue with Juggernaut [X-Men #12], and it’s not because Kirby completely penciled it. He does the breakdowns, and Alex Toth does the finish.

“So it’s like you’re getting a Kirby story because he’s pacing the entire thing and he’s making all the decisions as to the camera shots and stuff, and then Alex Toth does the finish on top of it, and I think that’s just a really fun match… So that’s kind of my favorite thing.”

One of my favorite things is seeing a non-superhero artist like Piskor run amok with one of Marvel’s mega-franchises. Piskor, like many fans, hopes it will lead to more auteurs being given the keys to the Fantasticar, so to speak: “…I specifically wanted to do this because I knew it would be an easy sell and an easy thing for readers to pick up and understand…

“The point is to make this thing a hit so they have the incentive to try to keep it going, to keep this kind of energy up. And I think we’re on that path. I’m quite sure Marvel and DC are licking their chops to see who they can pillage from Fantagraphics or thereabouts to try to get some cool energy back into those books.”

One would think Tom Scioli would get such a call by DC at some point with a lucrative offer to do the New Gods, because we deserve it, folks. But until that glorious day, we’ll have to settle for Scioli doing Kirby in a different way: through a biography Piskor calls “…the best comic being made right now.” 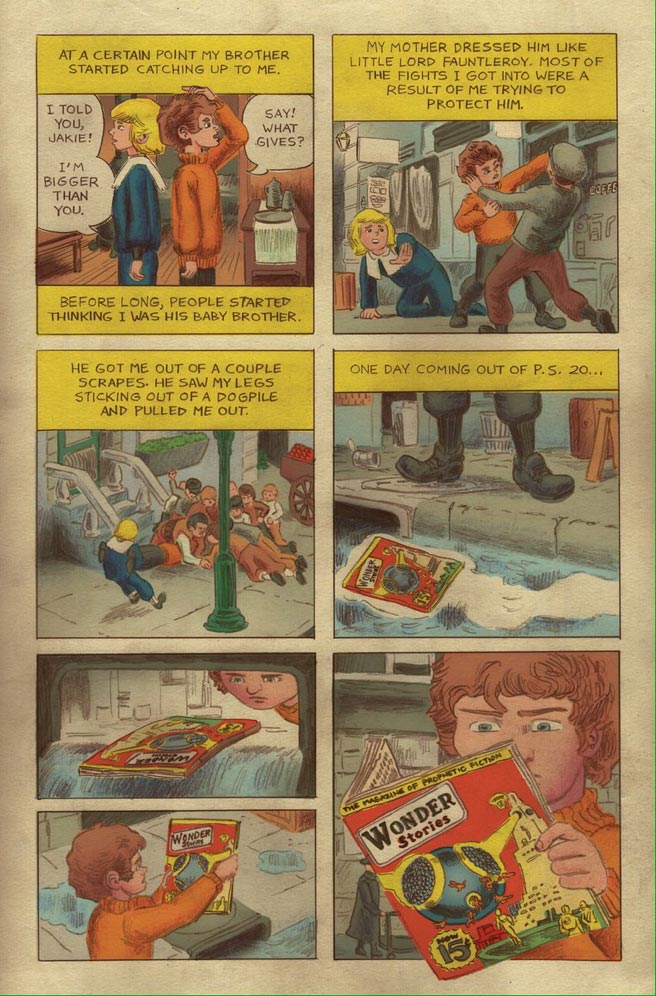 Piskor said, “Kirby is a project that Scioli has had swirling in his head for decades, basically. I think he’s objective enough to pull back a little bit from the hero worship, and to, not feature flaws, but just to see him as a human being. I don’t think Erik Larsen could do that. I don’t think Mark Evanier could do that. I think they’re too entrenched with the hero worship of Jack Kirby, the guy who created all the stuff they love and adore.”

This bio could also help educate folks who still think Stan Lee is the sole creator of the Marvel Universe. Piskor said, “I’m really behind this Kirby comic because I want people to see this story instead of having to read clinical texts, like academic type texts, or go all over the place for interviews, like the famous Comics Journal interview with Gary Groth. Basically, Tom is doing a lot of work so everybody else doesn’t have to, and he’s putting it in comic book form, so I’m behind that guy’s project a million percent.”

Creators like Piskor and Scioli enjoy a multi-faceted, creator-friendly publishing world Kirby would have envied: they have so many options for publishing, self-publishing, working with corporate characters, or creating and owning their own. 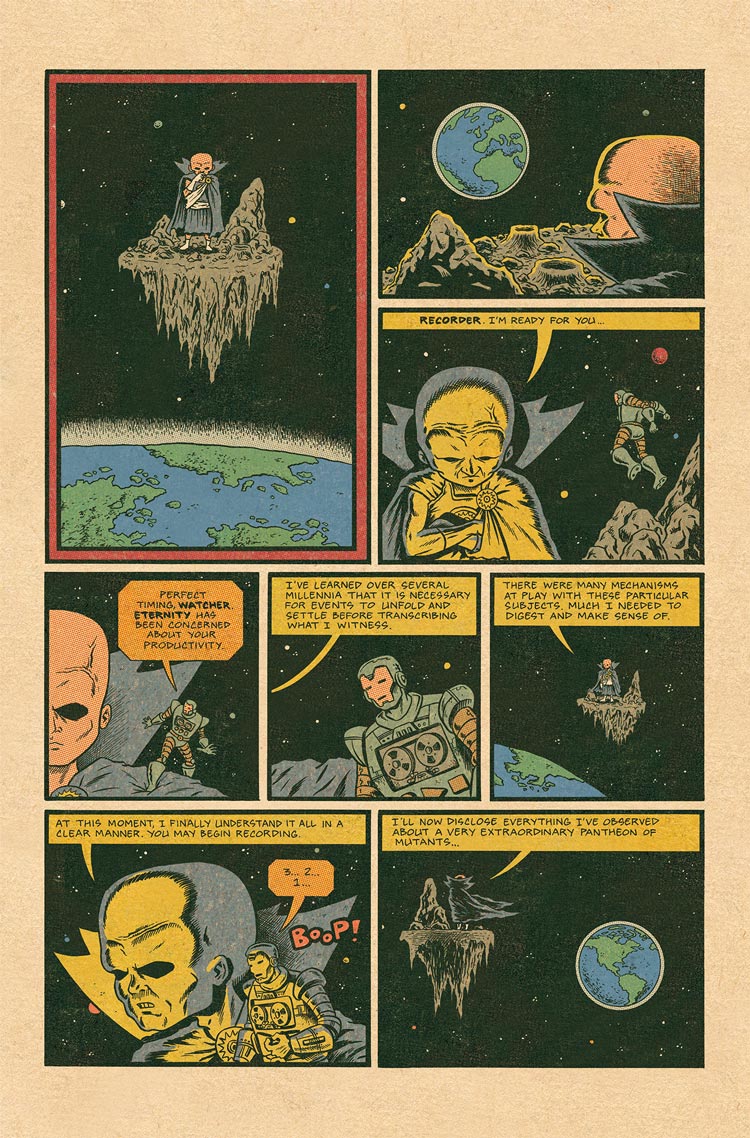 Piskor called Kirby, “the most generous person to ever have worked in that kind of work-for-hire environment. He was just very giving of all of his ideas.” But it’s sad that he didn’t have the choice, until the 1980s, to be a little less giving and own his creations such as Captain Victory and Silver Star. Piskor regrets that Kirby “didn’t have Image Comics to take his best ideas to, so the only game in town were the gangsters who were paying him to make comics.”

Gangster. Now there’s a Kirby word. He grew up around gangsters and in kid gangs, which informed many of his comics. Kirby made a memorable comparison in that famous Comics Journal interview: 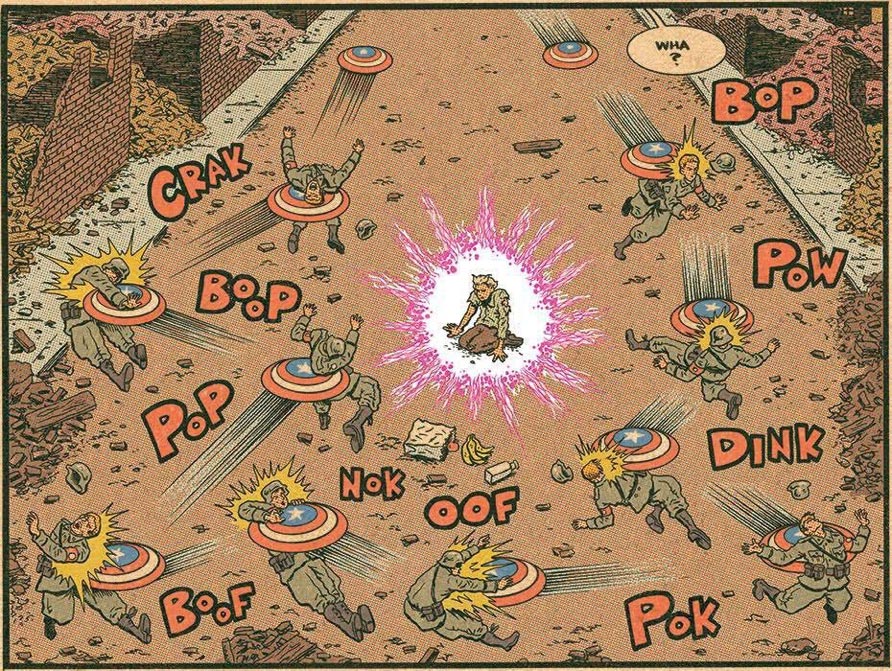 Look for Part 2 of my interview with Ed Piskor soon, including a discussion of this Nazi-clobbering Grand Design panel, which would surely get the thumbs up from Kirby’s space gods.