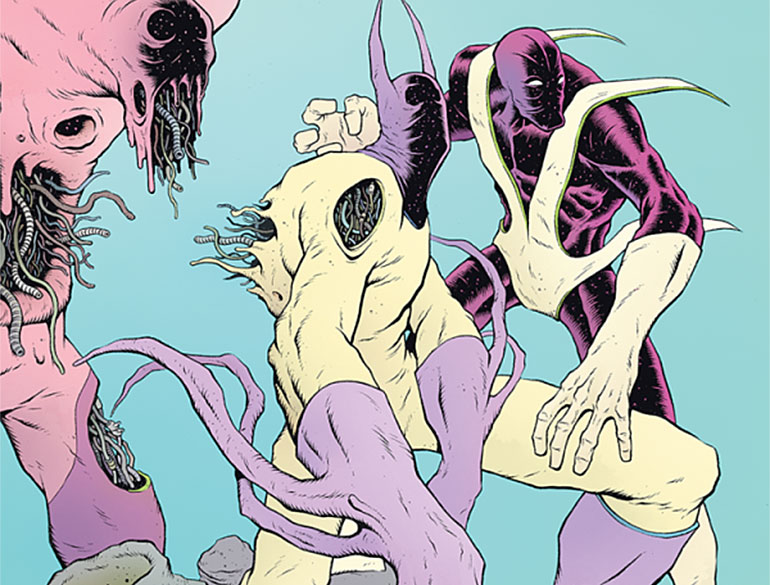 At C2E2 2019 — long before the steaming shitpile called 2020 — I first spied the work of Matthew Allison in artist’s alley. 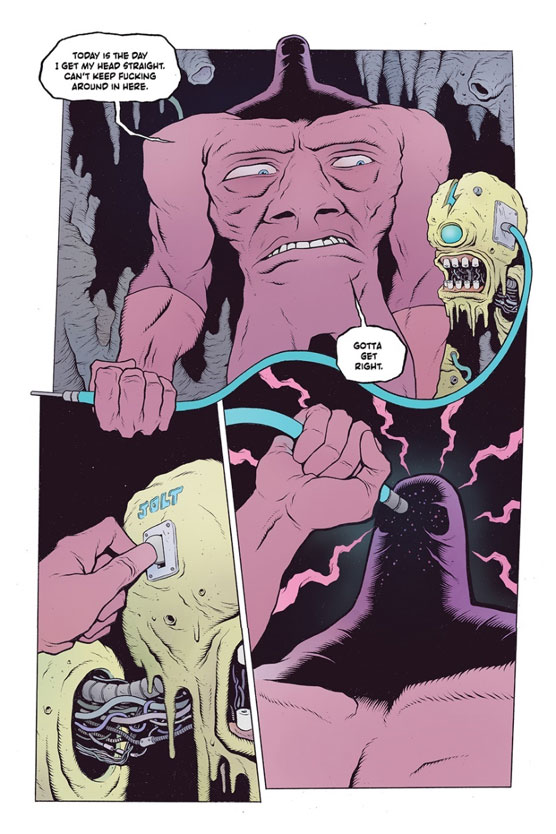 Allison’s pastel colors, inventive character designs, faceless humans, and 80s-inspired grotesqueries stand out on any shelf or at any convention, but next to so many same-old, same-old corporate comics, Cankor was an oasis of weird. I picked up issues #1-4 (one of them thanks to super-vendor Jason Hamlin) and became a fan instantly.

Now the self-published series Cankor: Calamity of Challenge is being collected (along with additional strips and illustrations) by AdHouse Books. Allison is a big Kirby fan too, so I met up with him in a Chicago coffee shop in early March to talk Cankor, Kirby, and muscles. If you like big weird images and mind-blowing art, you’ll love the twisty, improvised comics of Allison, who rips comics nostalgia right off the bone.

Cankor, like Howard, is an odd duck. Eyeless people, including a version of Allison himself, battle alcoholism and concertgoers in self-flagellating, black and white, autobiographical pages. But the bulk of these comics take place in the world of Allison’s imagination. When Cankor appears, he transcends the horror of everyday life in a candy-coated wasteland of mainstream comics doppelgangers and techno-biology gone bonkers. In these trippy pages, Allison’s colors make the pages sing a cosmic song. 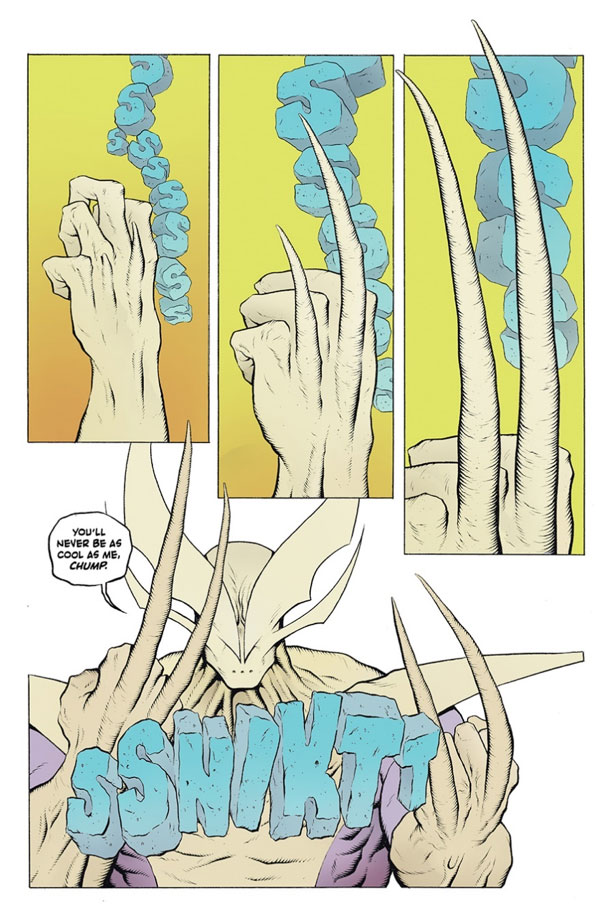 Allison explained the inspiration for his palette:

“Back in the 90s, they released a series of Gumby toys called Springtime Gumby. They were all pastel colors. But they switched everybody’s colors up so Gumby was light blue and Pokey was mint green. And those colors just stuck with me. I never bought the toys, but I just remember going to the store and seeing them, and that somehow sunk into this. So I thought, I’m going to have this gory mess of wires and flesh and everything, but if I have those pastel colors in the background, it’s not going to shock people as much. Or it might even pull them in more.”

Some parts of Cankor are obviously autobiographical or autobiographical-ish. Most of the comic is pure imagination. But even the most out-there panels have a personal basis for Allision. For example, when Cankor pulls a bunch of Batman-like figures out of a mountain, the subtext should be relatable for most comic artists. 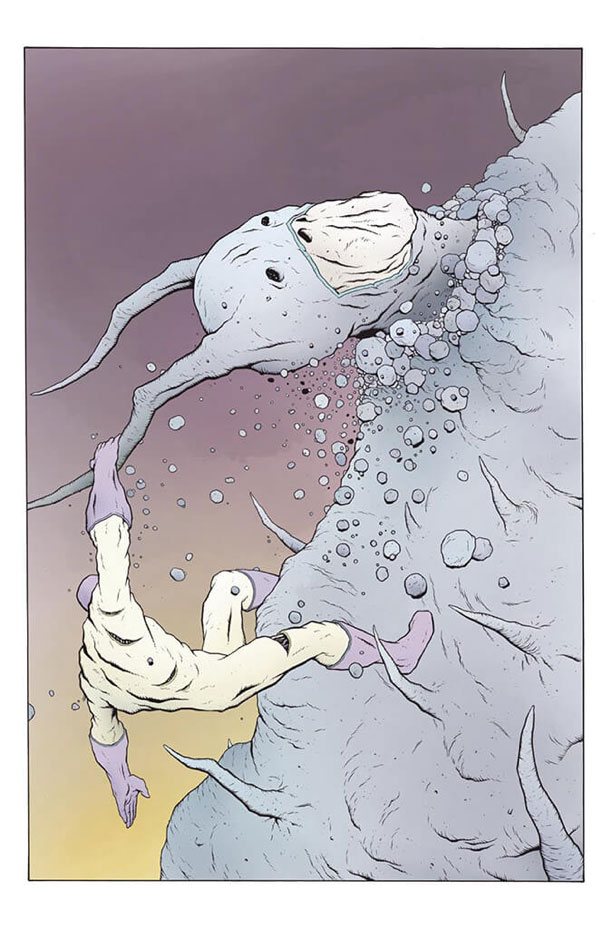 “To me, that particular image is representative of all that time drawing in sketchbooks,” Allison said. “If you look at all the sketchbooks I did from the time I was 16 till now even, there are pictures of Batman in every single one. And I always struggled with it. I always felt like you have to have your take on Batman. You know, every artist who works in semi-mainstream comics has their own version of Batman. But at the end of the day, what does that mean? There’s 2000 versions of Batman out there. How special is yours going to be? So pulling that corpse out of the mountain was like, you know, what am I adding to this, I’m just creating another rock in that mountain that doesn’t add up to too much, for me personally.”

Allison started pulling something unique out of that mountain in 2011, when he began working on Cankor. It was a long climb before then. 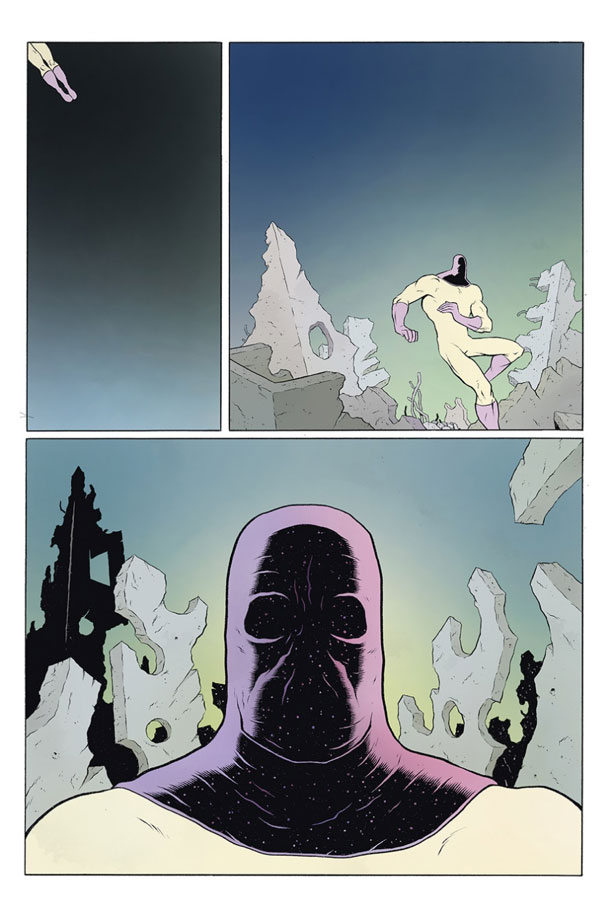 Allison, who’s 48 and from Denver, went to art school for six months before dropping out in 1992. He then took a job in a print shop where Allison, in his own words, “floundered.”

“It was a job my mom found in the newspaper. She said, ‘If you work there, you can print your comic books there.’ I worked there for 18 years and I only printed a comic as I was leaving. I didn’t start doing this in earnest until I was 38. Up until that time, it was just filling up sketchbooks with random BS that never really led to anything.”

Like Allison’s artistic evolution, Cankor was far from mapped out. What’s going to happen from page to page and panel to panel is hard to predict. That’s partly because of Allison’s process.

“I paint myself into a corner. I created this page, and I don’t know what happened before it. But because I don’t have that linear narrative, and because I can go back and forth between the black and white autobio sections and the full-color action sequences, I can set one aside and work on the other thing and then try to tie them in together. So none of it was scripted. There was no plot outline or anything like that. It’s just whatever I felt like drawing that day and then filling in gaps later. It was ultimately a fun way of doing it, but also very frustrating, and I would probably never do it that way again since it took way too long. You have to have some kind of map to get this stuff done relatively quickly.” 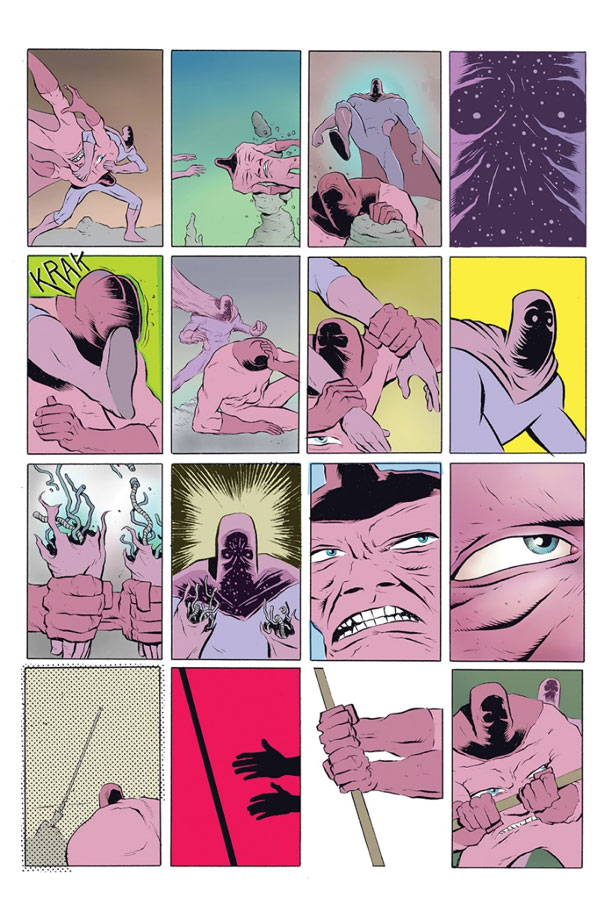 Allison is influenced by many artists—especially Jim Woodring, Basil Wolverton, Frank Miller, Bernie Wrightson, and Charles Burns. The Kirby influence stands out in the strangeness and power of Allison’s work. His favorite Kirby is from the 1970s, when the King was as close to an auteur as you could be in mainstream comics. 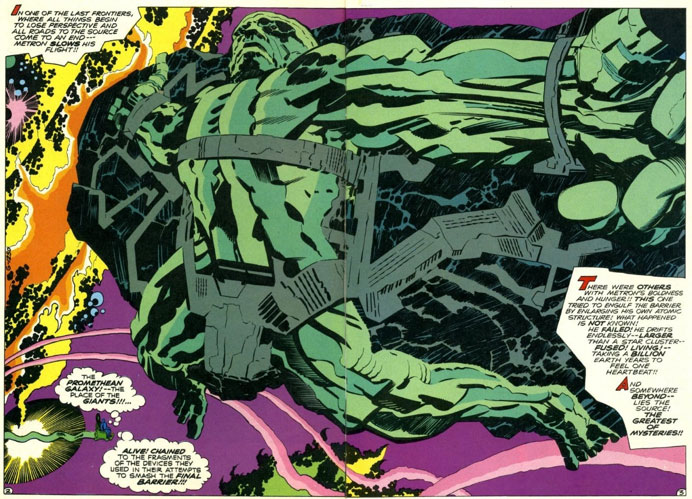 “That’s my favorite,” Allison said. “The Fourth World, The Demon, Sandman, all that DC stuff.”

But it wasn’t love at first sight for young Allison. I asked him about his first Kirby:

“I don’t know if I bought this from Mile High Comics, but it turned out that one of the first things I got was an early issue of Fantastic Four, a Kirby issue, and my thought was I’m going to buy the lowest grade Fantastic Four issue I can find, the earliest one, because I only have five bucks or whatever. I had to get my mom to write the check for me. So it was probably a later Kirby issues. I had never seen his stuff: at the time I was into the John Byrne Fantastic Four. At that point, if you had asked me my favorite artist, I would have probably said John Byrne. I was eleven or so.”

The Byrne era did little to prepare Allison for Kirby: 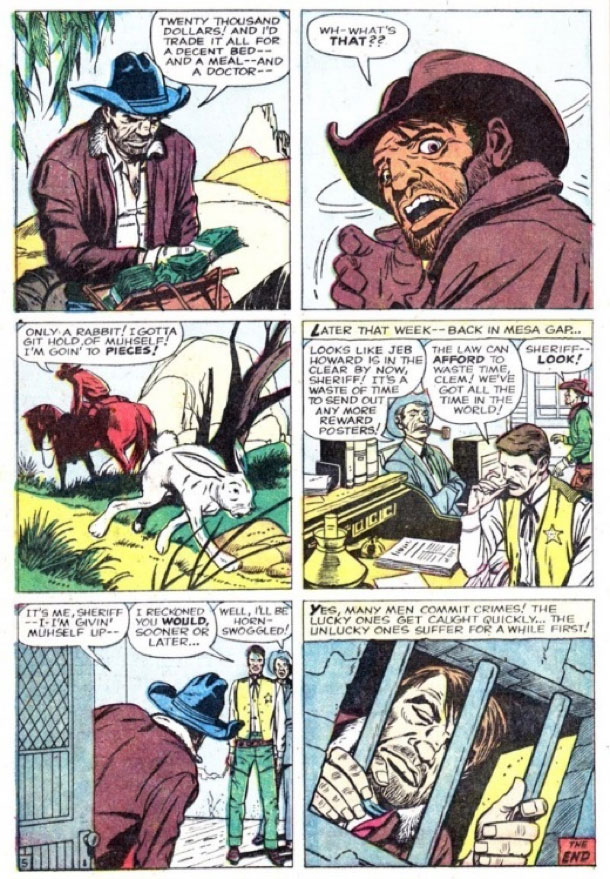 “Around that same time, I ended up with a Marvel western reprint, like Two-Gun Kid or something like that, and it had a Kirby story in it. I had a similar experience where the faces just seemed misshapen and strange to me, and it made me feel odd to look at his stuff. It wasn’t until I was in high school that I really grasped what Kirby was about and understood the power of that art and his importance in general.” 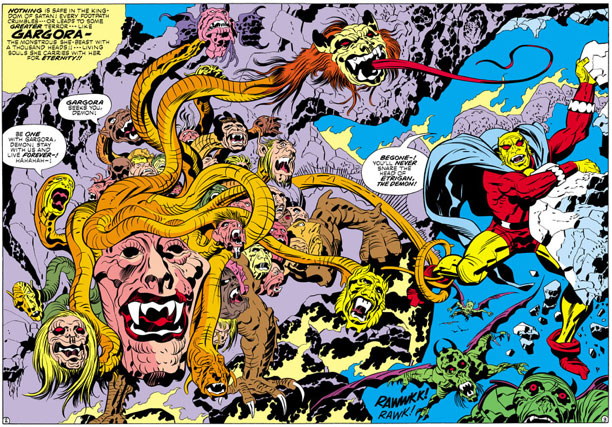 Once you go Kirby you never go back. We talked about the preposterous creativity of 70s Kirby.

“It’s crazy because it’s coming from somebody who’s in his fifties at that point and fought in World War II, went through some horrible, horrible stuff, lived through the depression, and yet was capable of having that type of imagination and being so seemingly strait-laced. You look at some of that stuff and you picture, like one of the underground guys, you picture some longhaired hippie-looking dude who was making this stuff, with black light posters in his room. But no, it’s Jack Kirby, smoking a pipe or a cigar in his studio next to the fireplace and coming up with this insanity.” 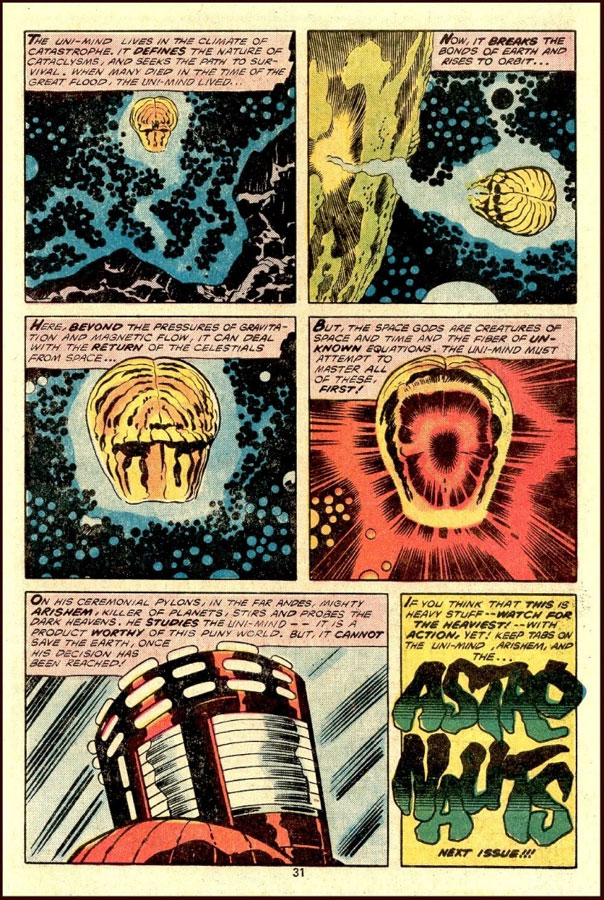 Though Allison got into Kirby late, he retained a taste for the King even after moving on from DC and Marvel to alternative comics. In the 70s and 80s, Kirby was certainly weird and wonky enough to pass as an alternative creator, though he had created most of the mainstream.

“I think that’s the appeal of him too. I certainly gave up on mainstream comics in the 90s and got into alternative work and discovered the undergrounds, but Kirby remained consistent, and I still liked that stuff because to me it was more in line with that bizarre underground lowbrow stuff than it was with any of the other contemporary Marvel and DC stuff that was coming out in the early 90s.”

One thing that was popular in the 90s—and every other era of superheroes—is muscles. And damn if Cankor isn’t full of them, often twisted into organic legos building who knows what. 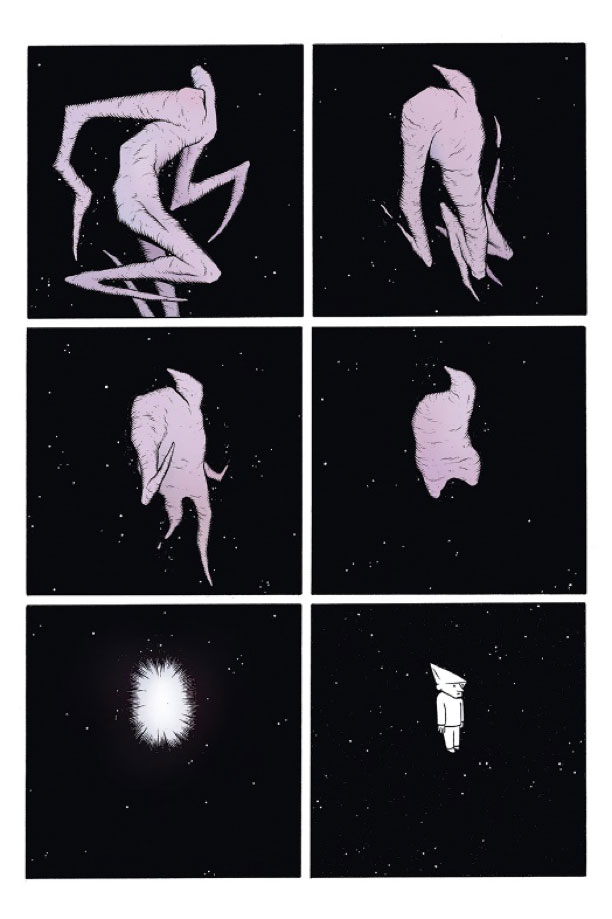 The preponderance of muscles, like the colors, give Cankor a visual cohesion. Allison talks about how comic books are indoctrinated into drawing muscles often at the expense of storytelling and other, less rippling subject matter.

“My intention was to get that out of my system and go overboard with it. I have a spaceship just made of muscles.”

But he was also inspired by a family member.

“My dad wasn’t a bodybuilder by any means, but he arm-wrestled and always made fun of people who had small arms for whatever reason. I remember we were watching MTV and a Dio video came on and Ronnie James Dio was wearing a sleeveless shirt, and my dad said, ‘Oh, jeez, look at that physique.’ And so in my mind, ‘I’ve got to have big arms when I grow up.’ In my twenties, I worked out a lot… The other thing my dad had was [Frank] Frazetta books and calendars. Everybody Frazetta paints is naked and their muscles are glistening. Everybody’s flexing constantly.”

Allison is flexing bigtime these days as one of the most exciting creators in comics—an independent creator with Kirby-level power. Like Kirby’s work, Cankor — available from AdHouse Books now — transports you to a place you’ve never been before. That’s a vacation we could all use right now.