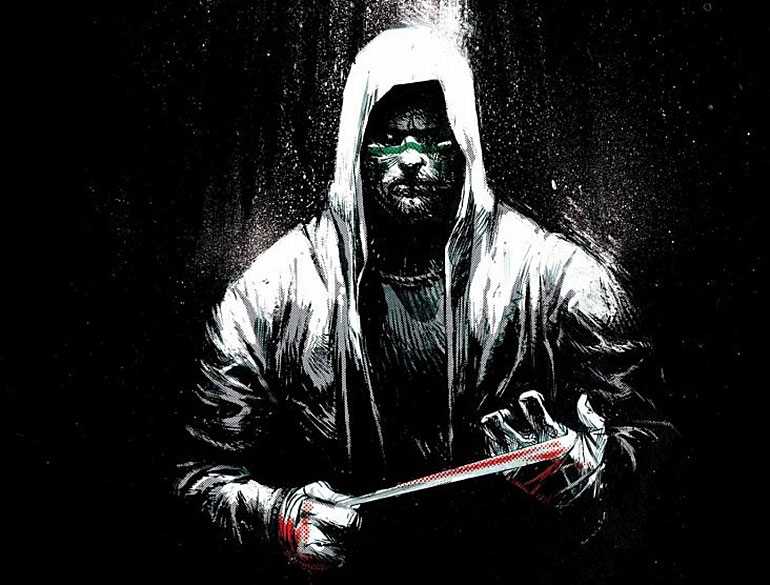 I have a superpower of sorts. I can look at anything — a crowded coffee shop, a walk in the park with my dog, a conversation with a neighbor, a ride down the elevator, or just the creaky process of getting up in the morning — and immediately predict, in great detail, how it’s going to go hideously wrong. As I often tell my somewhat amused therapist, I look at the world through shit-colored glasses.

You know who else has a prescription like that?

Karnak of the Inhumans, a character created by Jack Kirby and Stan Lee but brought to fruition by Warren Ellis and several artists (David Aja, Gerardo Zaffino, Roland Boschi, and Antonio Fuso) in 2015-2016. Thanks to Ellis, whose work is as idea-rich as Kirby’s, Karnak shines as one of the King’s most cautionary creations: a Negative Nancy for the ages. 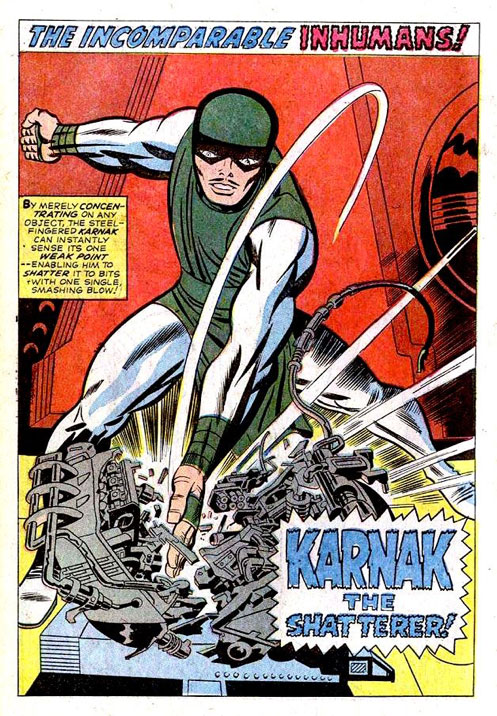 Introduced by Kirby and Lee in Fantastic Four #45 (December 1965), Karnak didn’t stand out much among the Inhumans. In his defense, it’s not easy to pop next to a redhead with hair that would make Dr. Octopus jealous, a king whose whisper is kaboomier than C4, a giant teleporting dog with a fork in his head, and a fish guy.

Karnak was a simple character with a simple power: the ability to find the flaw in anything. That led to Karnak breaking a lot of stuff. If you needed someone to knock down a wall with a karate chop or bust a boulder with a dropkick, Karnak was your man.

For the next 50 years, Karnak was used sporadically. He didn’t get his own series until 2016’s Karnak, by Ellis and artists Aja, Zaffino, Fuso, and Boschi. This version of Karnak is still good at breaking stuff, but the stuff now includes everything from frequencies and philosophies to reader brains. 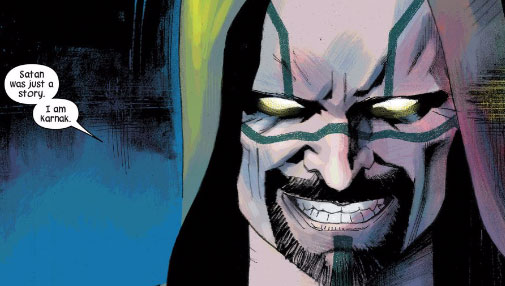 Ellis, in conversation with Kieron Gillen at 2018’s Thought Bubble, said of this series,

I had a fine old time playing around with existentialist philosophy and neo-nihilism and what have you for six issues. It’s the perfect example of finding that thing in a piece of old creative IP that you can care about. This is a guy, his one power and his one job is to find the flaw in anything. How is that immediately not the most miserable idea you ever heard in your life? He can experience no pleasure because he can see the flaw in everything. Everything he looks at is somehow wrong, and he knows he can break it by touching it. I could get 6 issues out of that. Frankly, I probably could’ve got 20 years out of that.

In those six issues, Ellis and company manage to make “the most miserable idea you ever heard in your life” highly entertaining. The plot involves SHIELD, via Agent Coulson, enlisting Karnak’s help to bring an abducted Inhuman home. Teenager Adam Roderick underwent “Terrigenesis” thanks to a Marvel MacGuffin of the month in which the Terrigen mists, which create Inhumans, were on the loose. 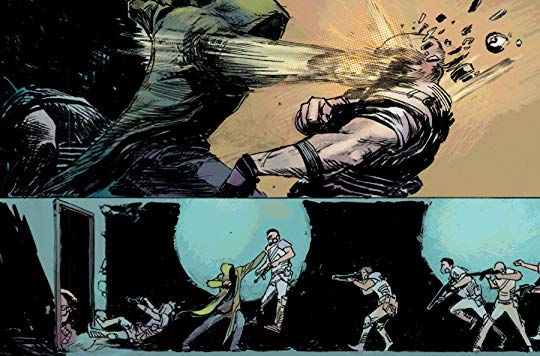 Thanks to the Terrigen infusion, Roderick’s allergies cleared up as if he took Omega Level Benadryl, and he also developed the meta-ability to grant abilities to others, becoming a walking wish-fulfillment machine. SHIELD needs Karnak to bring in Roderick, now an Inhuman and apparently kidnapped, due to byzantine legalities that are a pitch-perfect spoof of real-life red tape.

Along the way, Ellis portrays Karnak as a bitter (though witty, because Warren Ellis) person, hiding from the world, convinced he’s not special and devoted to making sure no one else thinks they’re special either. Though an Inhuman by birth, Karnak never received those empowering mists himself. He cultivated his flaw-finding “power” through intense study, personal deprivation, and batcrap insanity at the Tower of Wisdom. 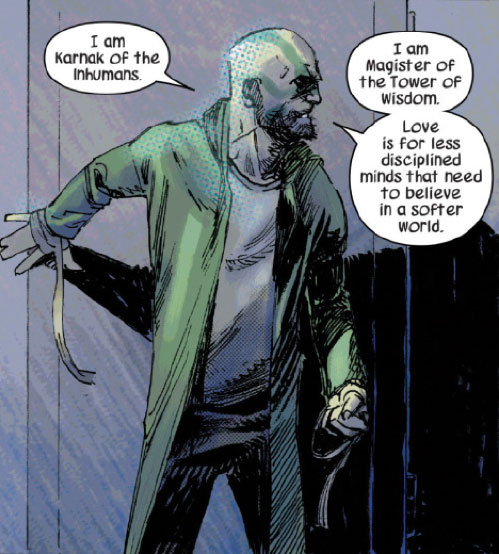 New Inhuman Roderick is a perfect no-funhouse mirror of Karnak. We’re all snowflakes to Karnak, who sneers, “You all think you’re so special.” Roderick not only thinks everyone is special; he helps them become special. No wonder even stoic Karnak has to admit this caper is a “difficult case.”

By the way, I reckon even Karnak would have trouble finding the flaw in David Aja’s covers: 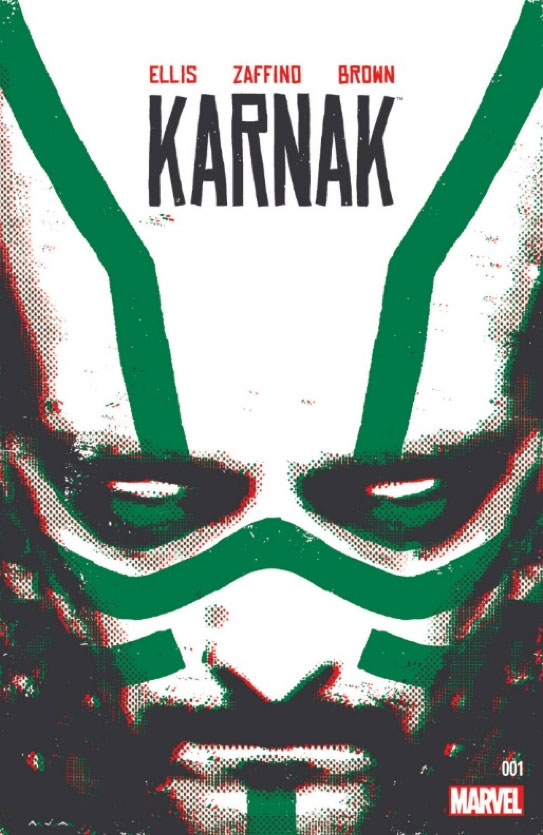 Without spoiling anything, this series is a full meal intellectually and a heart-stomper emotionally: one of Ellis’s most underrated works. But I keep coming back to it because it’s such an inspiring negative example for this life thing we’re all part of for the moment.

I’m kind of a Bizarro Karnak; I see plenty of flaws, but I feel like they’re more likely to break me than I am to break them. Both of us could use a brighter worldview.

Sure, there is a flaw in everything — duh — but finding it isn’t that impressive, except as a way to waste your life. Until Terrigen mists become legal (or at least real), I — and maybe you — should cultivate superpowers that are less depressing.