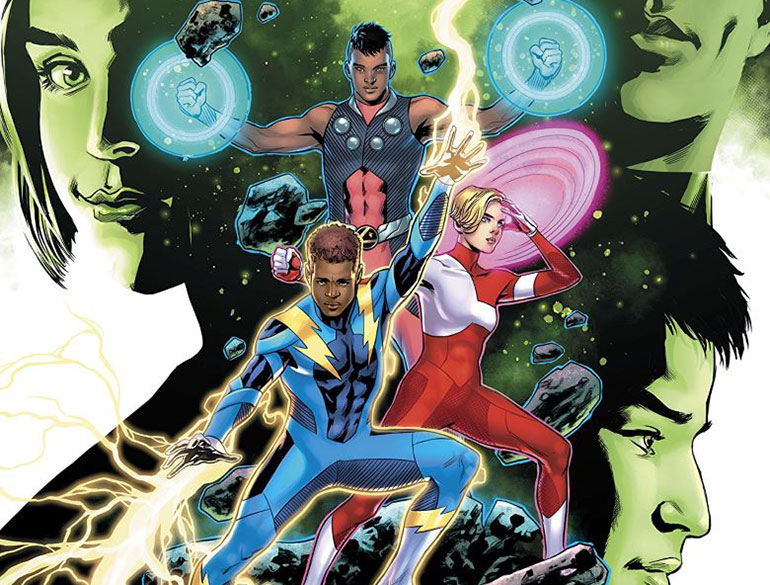 Welcome back! It’s issue #4 of the new Legion of Super-Heroes series and we finally get the backstory on the Legion’s foundation… Or at least, part of it.

This issue starts with Superboy finally settling in to view the orientation the Legionnaires have been talking about since the first issue. He doesn’t quite get through all of it, though, because his viewing is interrupted by Brainiac 5 announcing that Aquaman’s Trident has been stolen and by the arrival of the Science Police, there on orders of the President to arrest the Legion. 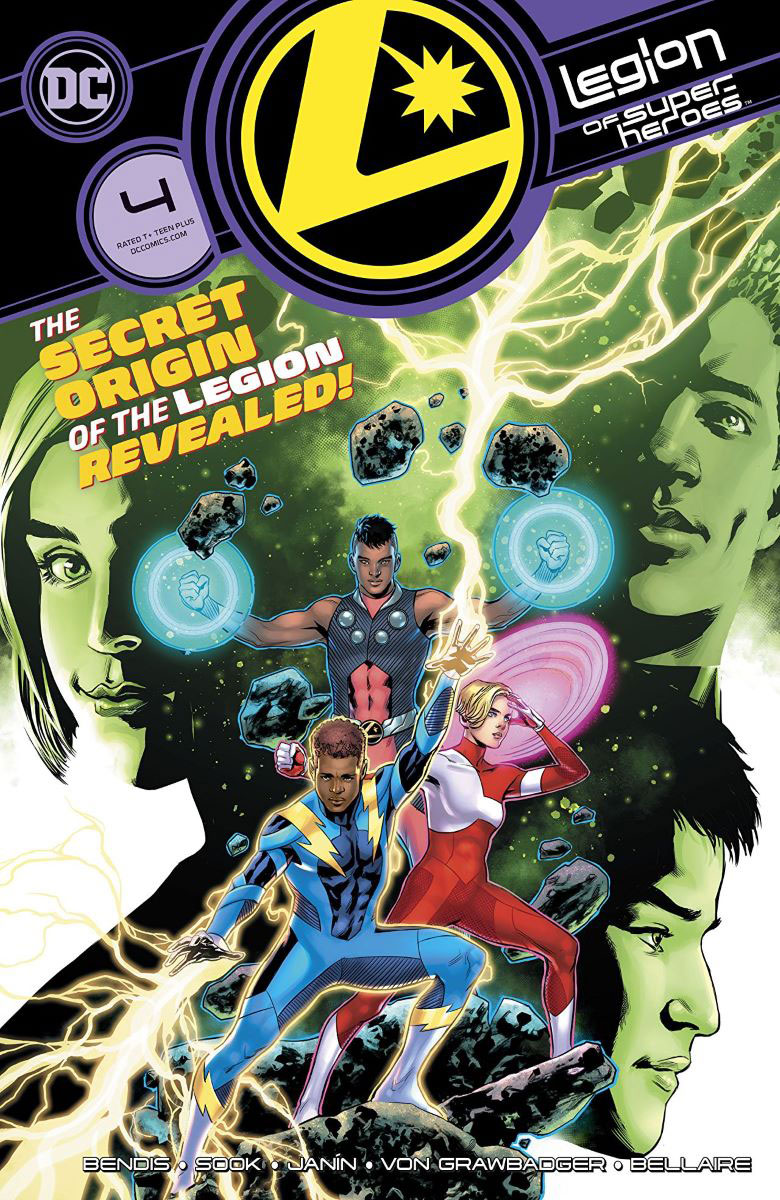 In between, we see the moments when Saturn Girl, Lightning Lad, and Cosmic Boy found out they were being invited to join the Legion (or, rather, the Young United Planets, which became the Legion). And we see part of the meeting between the three founding Legionnaires and the President, before the memory replay gets interrupted by Brainiac 5.

This issue — again by Bendis, Sook, Von Grawbadger, Bellaire, and Sharpe, with special guest artist Mikel Janin — is mostly about backstory, which is always tricky. Backstory can help inform the reader’s understanding of characters and events and enrich the reading experience, but, with some notable exceptions, it’s rarely all that entertaining in-and-of itself. At the same time, it’s often necessary, particularly when launching a new Legion of Super-Heroes title, especially if you’re starting right in the action with an established Legion rather than starting from the foundation.

The creative team keeps the backstory here reasonably engaging, in essence telling three micro-stories about Saturn Girl, Lightning Lad, and Cosmic Boy’s lives before the Legion. What’s most striking, to me at least, is the differences between these versions of the characters and prior versions.

It feels a little odd to talk about continuity when it comes to Legion of Super-Heroes, especially a new version that has so thoroughly cleared the deck of prior versions as this one has. In one sense, this new Legion could be literally anything; it could have an entirely new cast of characters, or a cast with similar names attached to completely different characters.

But if if were, fans would revolt; it wouldn’t “be” the Legion anymore.

And, on the other hand, one could imagine a new Legion that is precisely some specific older version of the Legion, down to the minutest details. In fact, one need not imagine such a Legion; one need only look at the 2009 Retroboot Legion to see a new Legion that’s just a modern recreation of an old Legion. 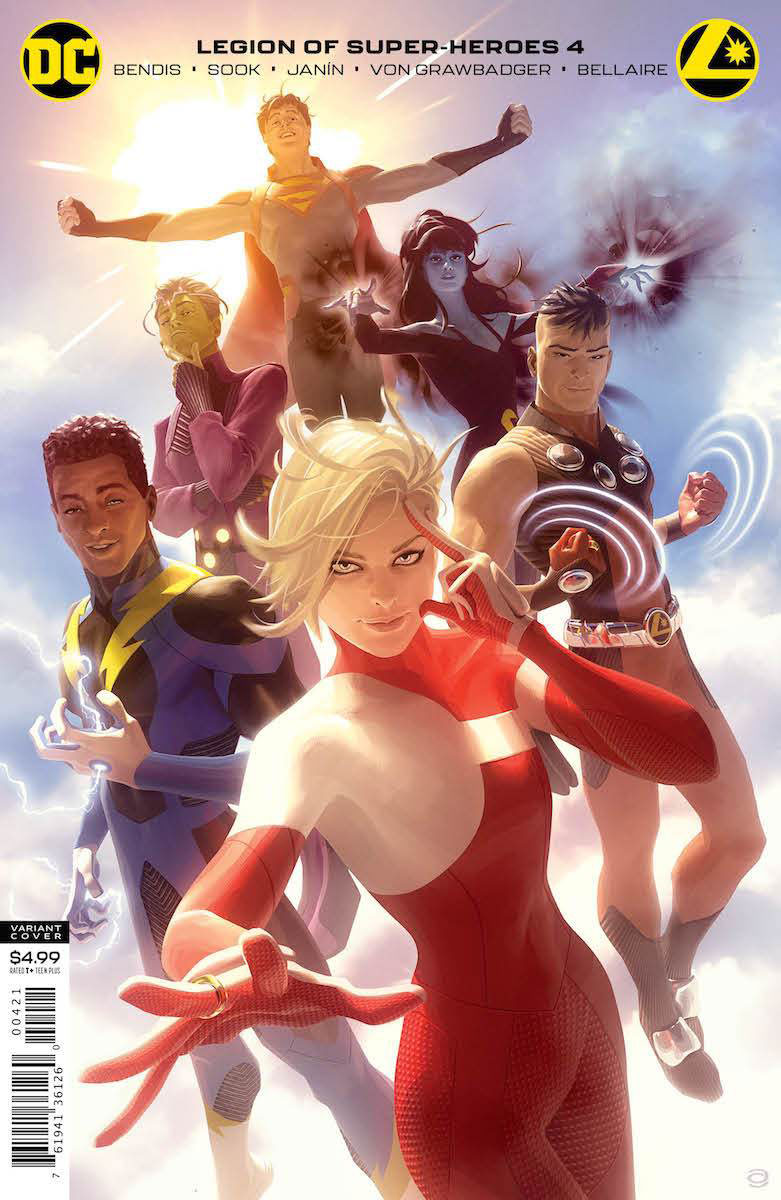 So, this new iteration of the Legion doesn’t have the same need to adhere to a strict canon that, for instance, a new run of Batman or Superman would. At the same time, there’s some relatively arbitrary point at which it’s so different from prior versions of the Legion that it no longer feels like the Legion. To an extent, this is all just Sorites Paradox in comics discussion form, and the “Legion/Not Legion” line will be drawn differently by every reader.

I bring all of this up because of the ambivalence I feel reading a lot of the new origins of the core Legionnaires. On the one hand, I feel a sense of excitement. Where might the story go with these revised origins? Why might these changed details be significant? There’s a kind of archaeological joy to unearthing the foreign pasts of these familiar characters. And yet…

And yet, there’s a concern, still a small concern, but a persistent one. What if all these changes amount to its being “not my Legion” anymore? What if this new Legion winds up so different from the ones I’ve loved in the past that I can no longer derive the same joy and satisfaction that I get from the older comics?

For me, personally, I’m not at that point, or even especially close to it. But I also pride myself on being very flexible and open-minded when it comes to new versions of favorite characters. I have occasionally remarked that “continuity is a lie comics companies tell to trick you into buying comics you don’t actually want.” That’s, perhaps, a bit extreme, but my general rule is that I don’t want a foolish adherence to continuity to hamstring a creative team from telling the best story they can.

Still… I can’t help thinking, as I read this issue and chronicle the myriad differences and changes, big and small, to characters and backstories, that I can imagine some long-time Legion fans getting very annoyed about these new versions of their favorite characters. And I can’t, in good conscience, say that annoyance is unreasonable.

But enough dithering. Some notable developments in this issue: 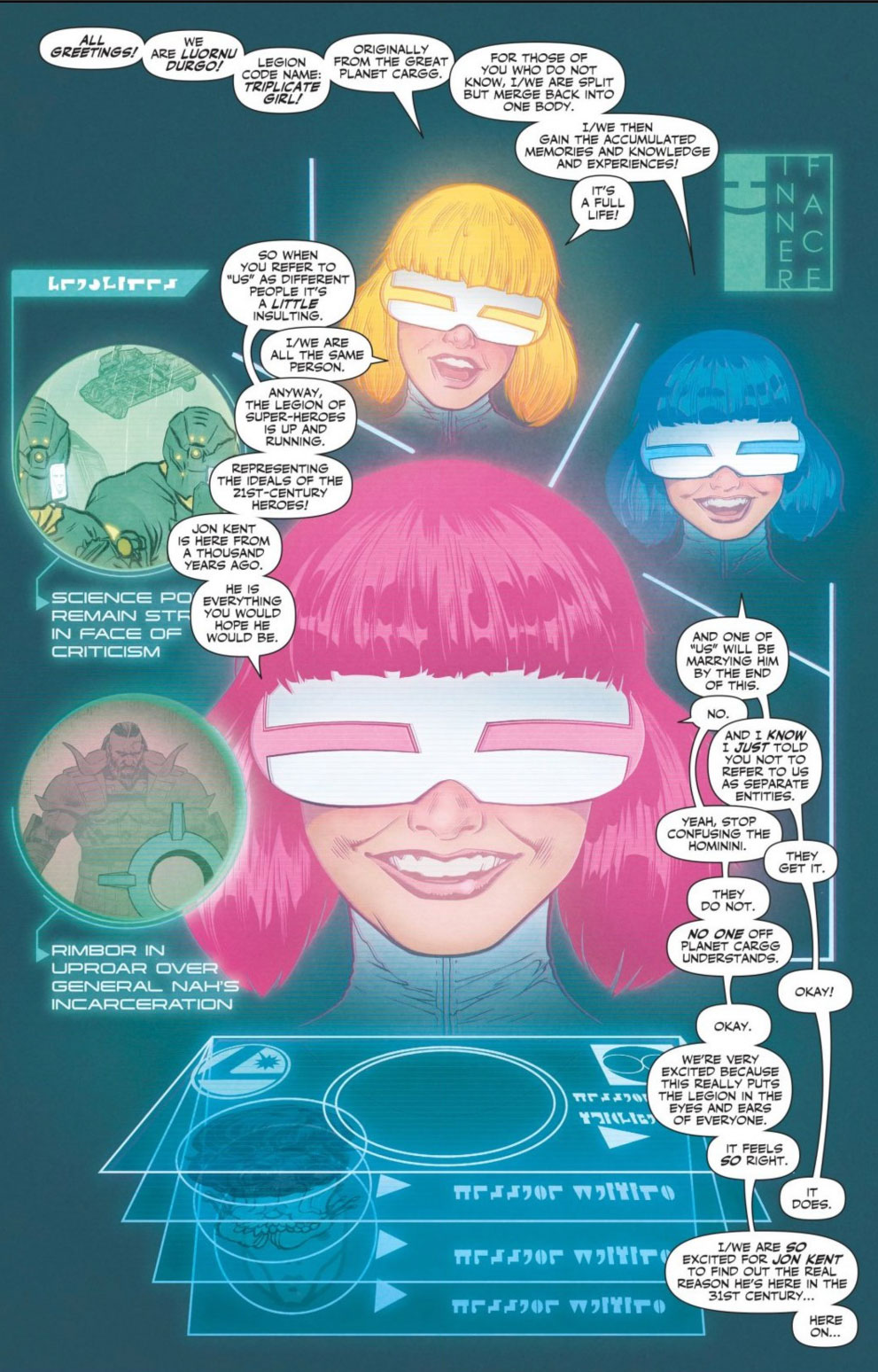 This issue opens with an Innerface from Triplicate Girl. Honestly, these are growing on me a lot. They’re a quick way to give us some face time with individual Legionnaires who might otherwise get lost in the shuffle, and they help demonstrate the character’s voice.

Notably, we see here that Triplicate Girl’s triples have their own knowledge and experiences, and those experiences are only shared when they merge. We’ve yet to see the merged Triplicate Girl. Also, each triple has a distinct personality, a kink previously seen in the Reboot Triplicate Girl, though in that case it was an aberration, whereas here it seems to be common to all Carggites.

This is a cute character thing for both Jon and Clark, but also seems to be signalling that they’re going to start transitioning away from Frichtman Tags. We’re already seeing a lot fewer of them in this issue. 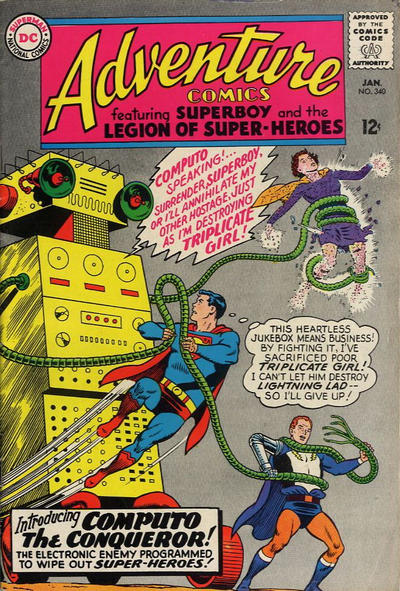 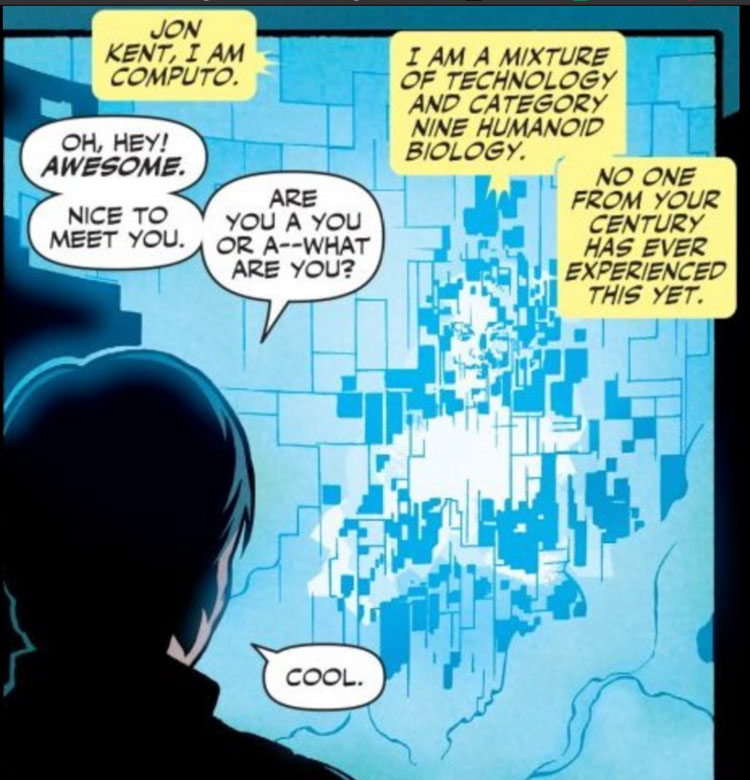 More specifically, Computo, in addition to being the Legion’s main computer system, is some sort of techno-organic matrix. Probably safe to assume that this won’t go horribly wrong at some point!

Just a little snippet of Saturn Girl’s interaction with her family that I found cute; her family telling her to clean up her psyche because it’s a mess. I really dig how weird and abstract Titan’s civilization is in this new Legion; Bendis, Sook, and the team really seem to have put a lot of thought into how different a civilization built from the ground up by telepaths would be.

I also feel like, so far, Saturn Girl is the Legionnaire who’s gotten the most face-time, with Cosmic Boy a close second. Creators always seem to have their favorite Legionnaires who get the spotlight more often than others, and it’ll be interesting to see a Saturn Girl-centric Legion run (In all honesty, I’d take a Saturn Girl Legion any day of the week over a certain creator’s Karate Kid-centric run…) 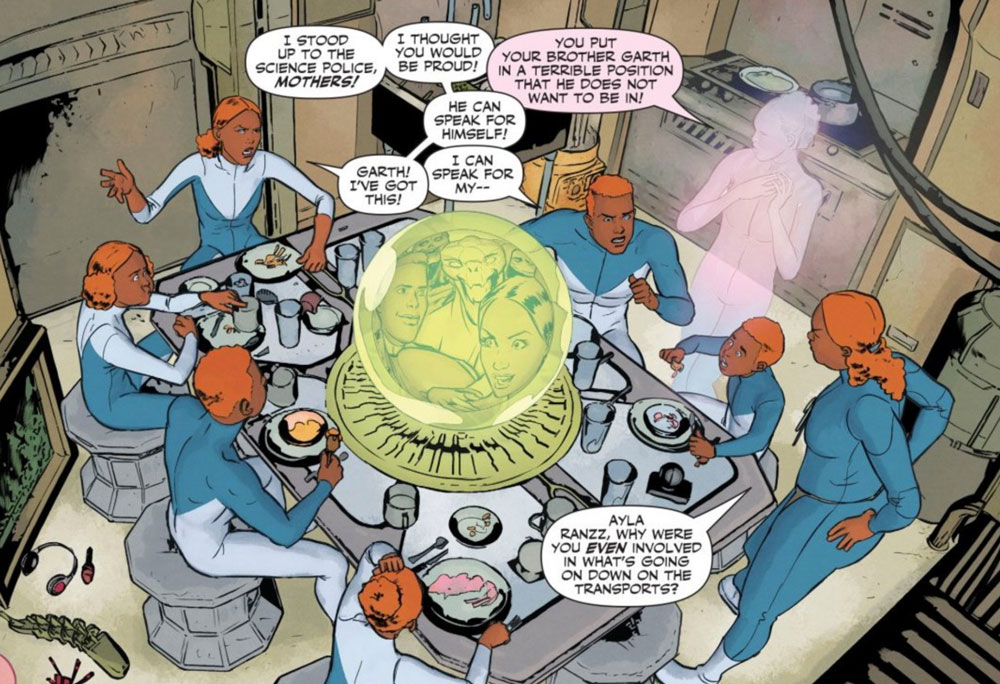 So here’s one of the big changes from prior versions: Lightning Lad and Lass have a lot of siblings! And also two moms, one of whom seems to be ethereal in some way? She kind of looks like how the new White Witch and Dream Girl look. Details to come, presumably.

Alright, it’s time for my favorite pass-time, getting way too into Legion Lore. So, as originally conceived (or, I suppose, as eventually conceived over the course of decades by multiple creators), Lightning Lad and Lass are twins from the planet Winath. Winathians are not naturally powered, but they are unusual in that they are almost always born as twins. Single-born children are generally shunned, which is honestly pretty messed up. 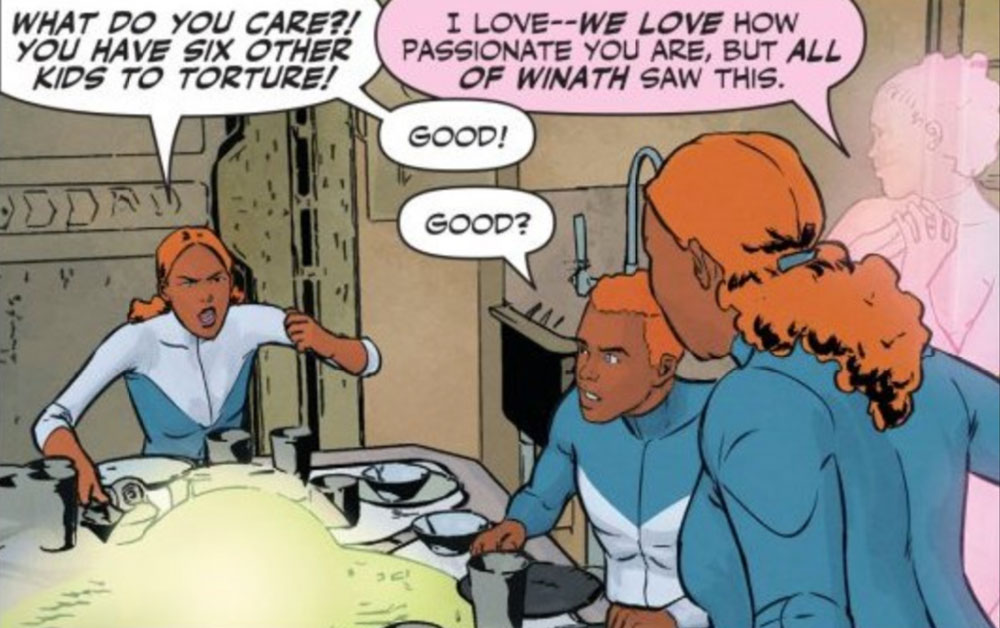 Ayla mentions her moms having “six other kids to torture,” which makes seven total kids, including Ayla. Hmmm…

Also, this seems to imply that Ayla and Garth’s powers are inborn rather than acquired through an encounter with lightning beasts. Also, all the Ranzz kids seem to have heterochromia, though their moms don’t. 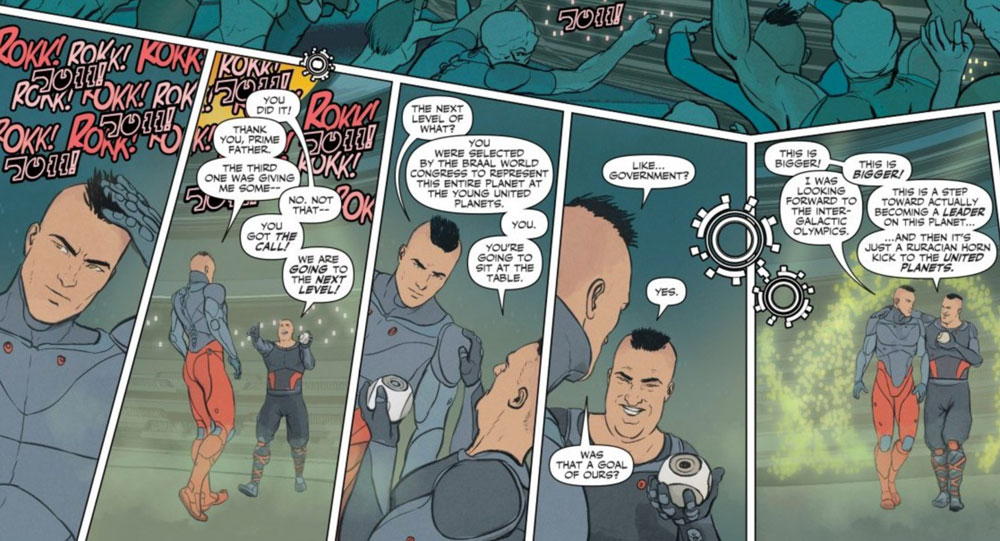 Similar to prior versions, Rokk Krinn is a champion athlete using his natural control over magnetic fields. What’s different here is… Just about everything else about Braal. We’ve seen a lot of that previously, with Braal having some sort of clan structure that’s led to significant internal conflict. Here we get another peek into Braalian culture: Rokk refers to a guy who is definitely not General Nah as Prime Father.

You’ll recall from prior issues that Rokk called General Nah Father One. So, just as the Lightning Kids have multiple moms, Rokk has multiple dads. I do appreciate that this team has put a lot of thoughts into all the ways that family structures should be different, both because it’s a thousand years in the future and because all these characters come from alien races.

Anyhow, Imra gets selected for the Young United Planets because she wrote an essay critical of the UP. Ayla and Garth get called because of their direct political actions in defense of the oppressed. Rokk gets called because… He’s good at sports. They all wind up meeting… 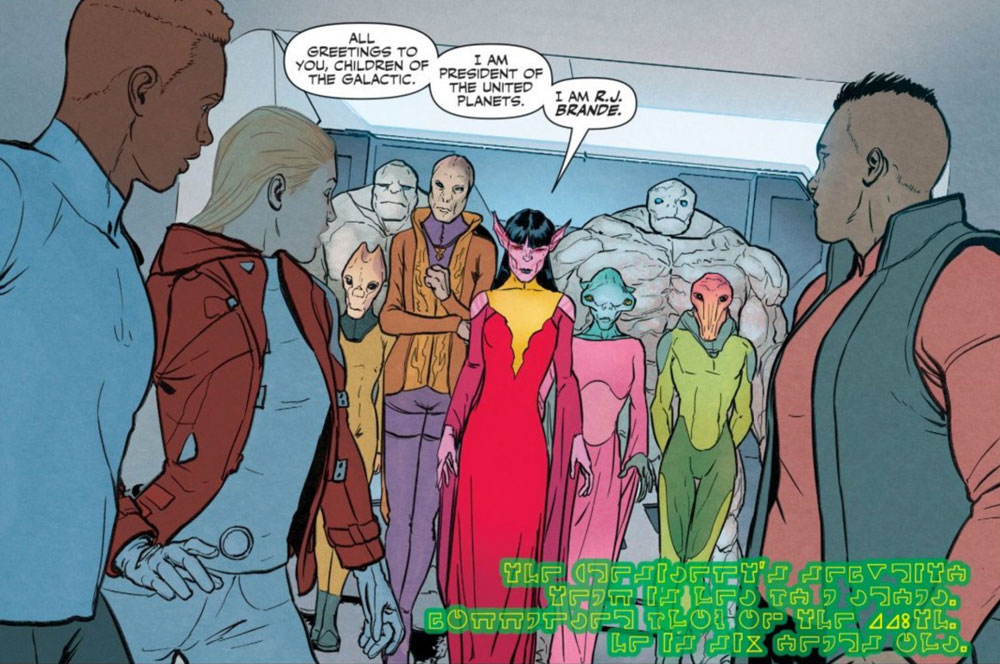 R.J. Brande, president of the United Planets. This is another twist: In prior versions, R.J. Brande is a wealthy capitalist who funds the Legion after the three core Legionnaires save his life. He’s also secretly a Durlan. In this iteration, R.J. Brande is the president of the UP, is a woman, might be a Durlan (we haven’t really seen any female Durlans so far, but she doesn’t look much like Chameleon Boy. On the other hand, Durlans are shape shifters…), and appears to have a highly adversarial relationship with the Legion she helped found.

Why is she gathering together kids who are critical of the UP? What tricks does she have up her sleeve? It seems significant that she has psychic blocks up that prevent Saturn Girl from reading her thoughts: 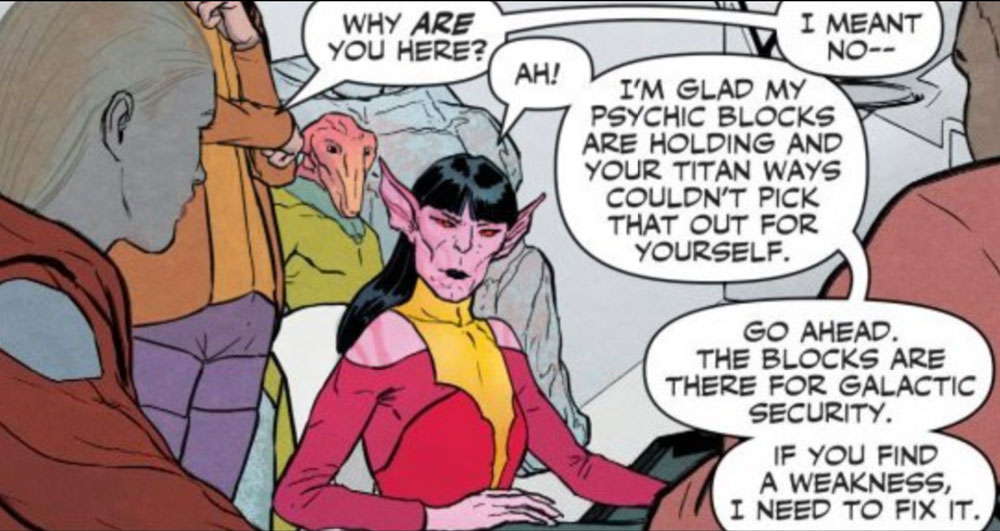 Regardless, the meeting is attacked by the Horraz and the the orientation cuts out just as the three core Legionnaires rush to the President’s defense. Dialogue implies, though, that there’s more to the story that would be revealed if the orientation had been allowed to continue.

So that’s that! This issue gives us more background and hopefully sets up some intriguing developments to be explored in the future. We’re starting to get more of a sense of this new Legion, but I wouldn’t say we’re quite comfortable and ready to just enjoy the ride yet. See you next month! 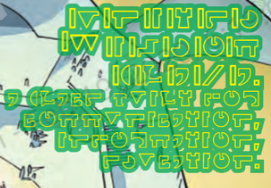 Winathian’s overbeing is called Validus, the Lord of Lightning. Single births are considered the children of Validus.

(Wow! Now there’s a change to a few elements of canon, and a lot to untangle! But that does confirm that twins are the norm on Winath)

This brings Krinn’s career record to 20-6 with 14 knockouts, he remains well-known for his knock-out power.

In the 17 fights that were tracked by Lexpubox, Krinn landed 76 percent of his power punches, which is 15 percentage points higher than the Braal heavyweight average.

The president’s security team is led by a Dryad.

Commander Blok of the 47th. He is six years old.