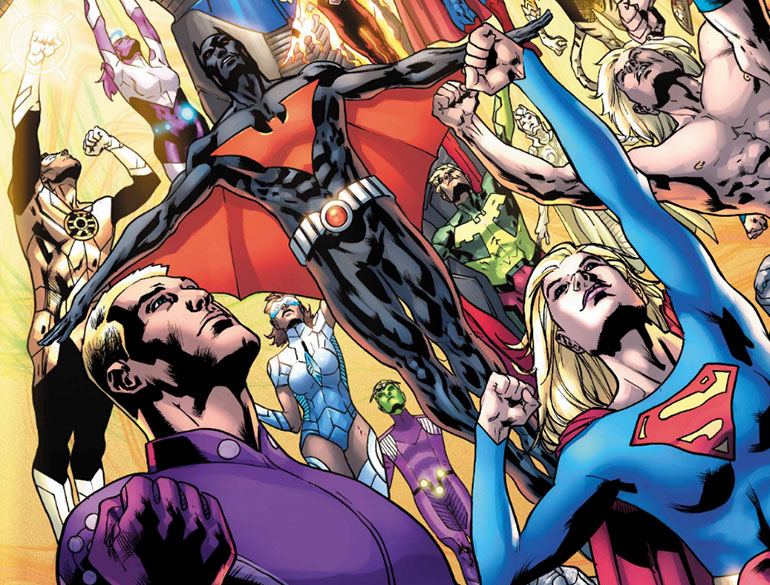 After six years of absence, we finally have the start of the miniseries that leads into the relaunch of Legion! And Legion of Super-Heroes: Millennium #1 boldly asks long-time Legion fans: “You’ve already waited six years, would it kill you to wait another month?”

I joke. I liked this comic a lot. The art — by Jim Lee and Scott Williams, Dustin Nguyen, Andrea Sorrentino, André Lima Araújo, Alex Sinclair, John Kalisz, Dave Stewart, Jordie Bellaire, and Dave Sharpe — moves from strength to strength and it tells a compelling story of what I can only presume will be a major character in the upcoming Legion series. But. If you’re looking for all your favorite Legionnaires to show up and for the ball to really get rolling on Brian Michael Bendis’ new Legion comics… that won’t be happening until Millennium #2, next month.

That said, let’s talk about this amazing comic.

Legion of Super-Heroes: Millennium follows Rose Forrest, a woman whose dissociative identity disorder (formerly called multiple personality disorder) causes her to switch to an alternate persona, the violent vigilante Thorn. If you’ve been keeping up on Action Comics, you’ve actually met this version of Rose/Thorn already; she’s been fighting the Invisible Mafia in Metropolis and was approached, in her Thorn persona, about joining the secret organization Leviathan.

Millennium opens in the indeterminate future, with Rose explaining her situation to now-President Supergirl (in a segment with art by Jim Lee, Scott Williams, and Alex Sinclair). She explains both her fear of her long-suppressed violent Thorn personality re-emerging, and her unexpected, unexplained longevity: Rose in the future looks the same as Rose in present-day Action, which is contrasted with the Kryptonian’s more aged appearance. 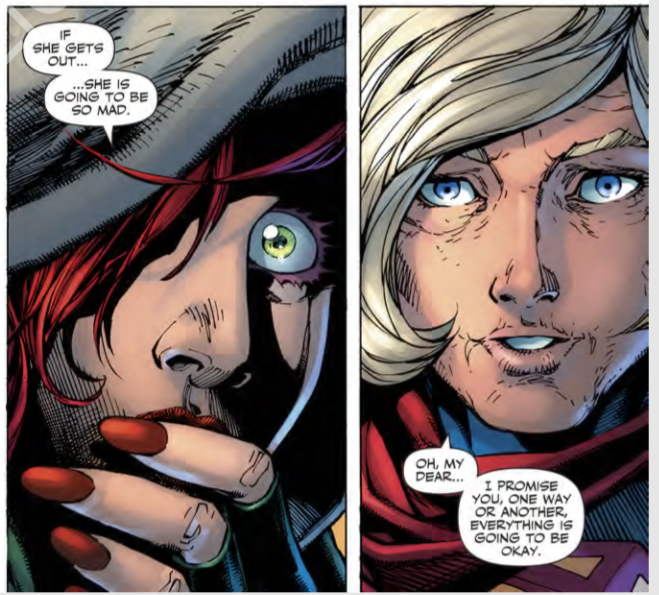 This, of course, presents an interesting question in and of itself: Why is Supergirl aging? We’ve seen in multiple places, recently, that Kryptonians exposed to the yellow sun don’t age, including Superman. It remains to be seen if this will be explained down the line.

What follows is a journey through the myriad, disparate futures of the DC Universe, linking multiple seemingly-incompatible future worlds into a single narrative, that of the ageless Rose Forrest.

We see her in Batman Beyond’s time (illustrated by Dustin Nguyen and John Kalisz), where the Thorn personality has overtaken her and she’s become a murderous vigilante. She confronts Terry McGinnis and tries to find meaning in the struggle against evil and chaos. We also get a glimpse of Rose’s declining ability to relate to other humans mentally, as her slipping grasp on the flow of time causes her to be confused over whether Terry is the original Batman. 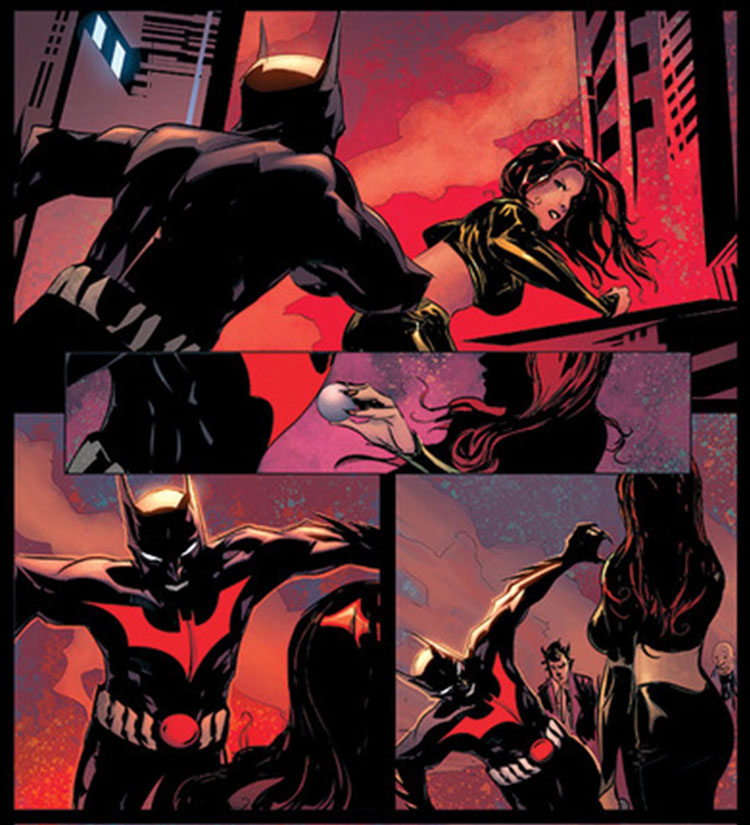 From there we jump to the world beyond the Great Disaster, where she meets Kamandi (illustrated by Andrea Sorrentino and Dave Stewart). By now, as befits the time, she’s regressed to a somewhat feral state, murdering an elder monkey to steal Superman’s suit.

Yet Thorn seems more calm and calculating here; she kills when it suits her, but tries to talk her way out of a fight with Kamandi, then runs away. She still tries to connect to the past, but seems confused, believing Superman’s suit might grant her superpowers. Sorrentino’s stark, simplified Kirby-esque styling in this segment is particularly striking. 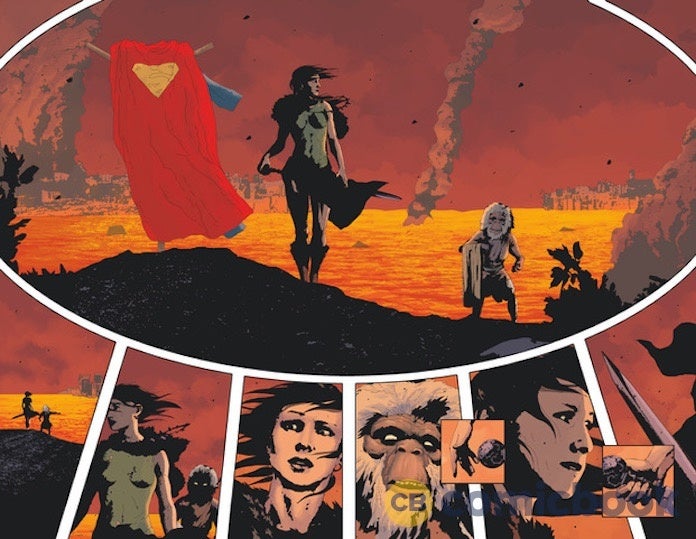 Rose presumably hitches a ride off-planet, because we next see her in the world of Tommy Tomorrow and the Planeteers, a futuristic cityscape littered with spacecraft that looks not unlike the way the future of the Legion of Super-Heroes has been portrayed (art by André Lima Araújo and Jordie Bellaire). 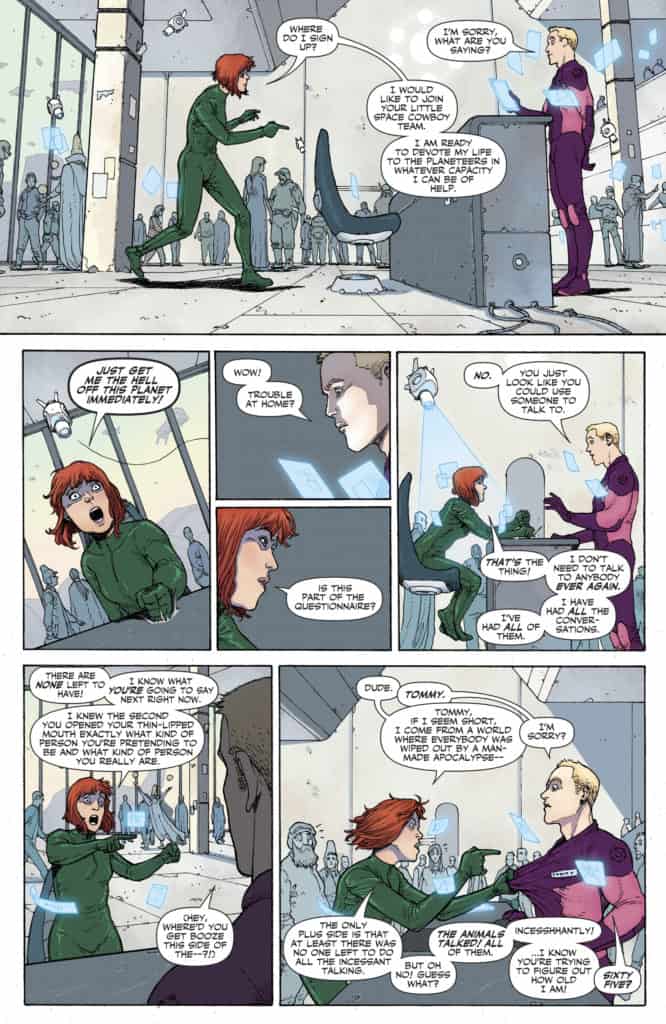 The Rose personality is back in charge, at this point, and Rose is trying to join the Planeteers and get off planet, but discovers that she’s considered too dangerous and psychologically imbalanced to be considered. This is driven home by her inability to have a coherent conversation with Tommy Tomorrow, the Planeteer recruiter.

Rose no longer can relate to other humans (or, indeed, to talking animals). Her extended lifespan means that she’s now had every conversation it is possible to have, which makes normal conversation impossible. The segment, and this issue, concludes with Rose on the run from security forces.

Legion of Super-Heroes: Millennium #1 is a fascinating portrait of a woman — who isn’t necessarily particularly sane to begin with — as she comes to grips with immortality and her place in a society that, over time, proves even less stable than she is. We see the more stable Rose persona grow more frantic and feral over time, while Thorn seems to become more calculating and less aggressive.

It’ll be interesting to see what Bendis and Sook do with Rose and Thorn going forward, both in the back half of Millennium and in the ongoing series to come. Presumably she’ll join, or at least interact with, the Legion, and her perspective on the team will be fascinating to see. This first issue sees her growing less and less attached to society and her fellow humans, so it’ll be interesting to see if the second issue, and her meeting with the Legion, sees a reversal in that trend.

Other than that, in terms of broader implications for the Legion, this issue does establish that all of DC’s various futures happen in the same timeline, in the same dimension. Previously we’ve seen things like the Great Disaster consigned to alternate Earths or variant timelines in order to avoid messing with the Legion’s timeline, but here we see that the whole mess of DC future continuity will be rolled up together.

How that’s all squared away remains to be seen, but based on interviews and hints in this issue, it seems like Earth won’t play much, if any, roll in the Legion series to come. That’s an interesting direction, significantly at variance with past iterations of the Legion, but it does help to resolve some lingering questions about the Legion (“Why are so many Legionnaires from Earth? Why is the United Planets so Earth-centric?”)