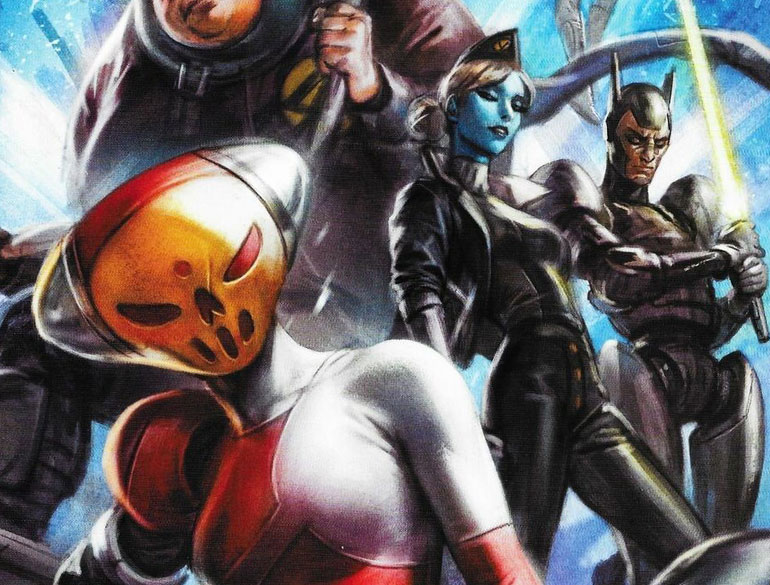 So… This is it. The final issue, so far as we know, of this run of Legion of Super-Heroes, and it does a fantastic job of summing up the whole series: Fantastic art from Riley Rossmo, cool and interesting ideas from series writer Brian Michael Bendis, somewhat frustrating plotting, and the promise of potential that never really gets realized. Let’s dive in.

This issue feels like a precis; that is, it feels like about 3 or 4 issues stuffed into one. Indeed, it arguably stuffs what could have been a year or two of plot into a couple of pages. On the one hand, it’s nice to see a story that isn’t excessively decompressed. On the other hand, this almost feels more like a summary, like “Here’s what we would have done during Year Two, if we had gotten a Year Two.” 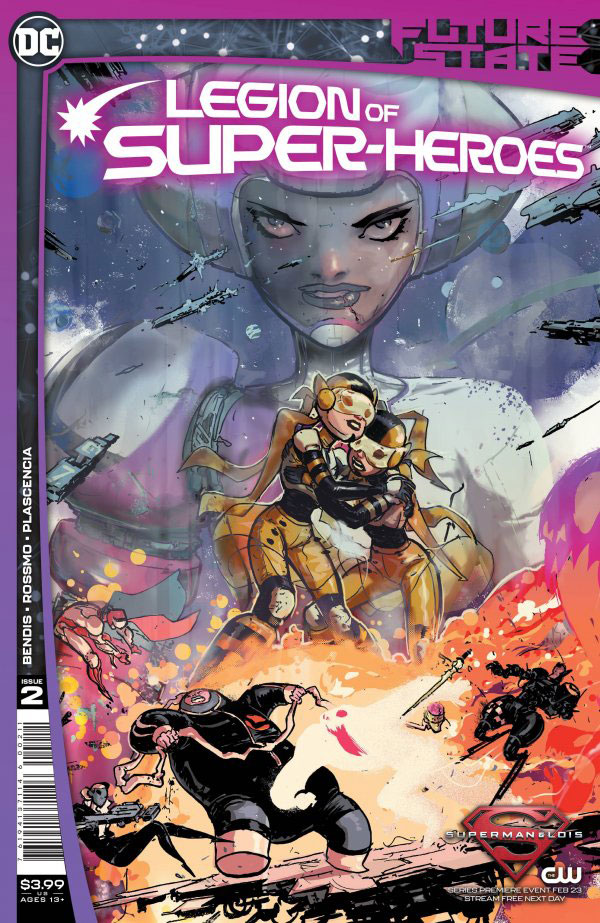 If you’re familiar with Legion history, this issue continues last issue’s conceit of paying homage to “Five Years Later,” with a reveal that a mysterious force had secretly engineered the downfall of the United Planets.

The twist, though, is that where the original “Five Years Later” had the Dominators as the shadow villain, this issue uses the heretofore good guys, the Titanians. It’s a fairly major twist (with basically no setup), and really does, or would have done, interesting things for Saturn Girl as a character. That aligns with this team really focusing in on Saturn Girl as a major lead for the ensemble cast, and I’d have loved to see where they went with it.

But they don’t especially go anywhere.

An epic, galaxy-spanning conspiracy is revealed, and then patly dispatched on the next page. Needs must, I suppose, and when you only have one issue it’s better to resolve things off-panel than to just leave a bunch of dangling threads that will never be resolved. The degree to which the loose ends are tied, though, does make me concerned that there are no behind-the-scenes plans for another team to take over the reigns for a new run, at least in the short-to-medium term. Or perhaps a new team is getting ready and wants a totally clean slate to work with. One can only hope. 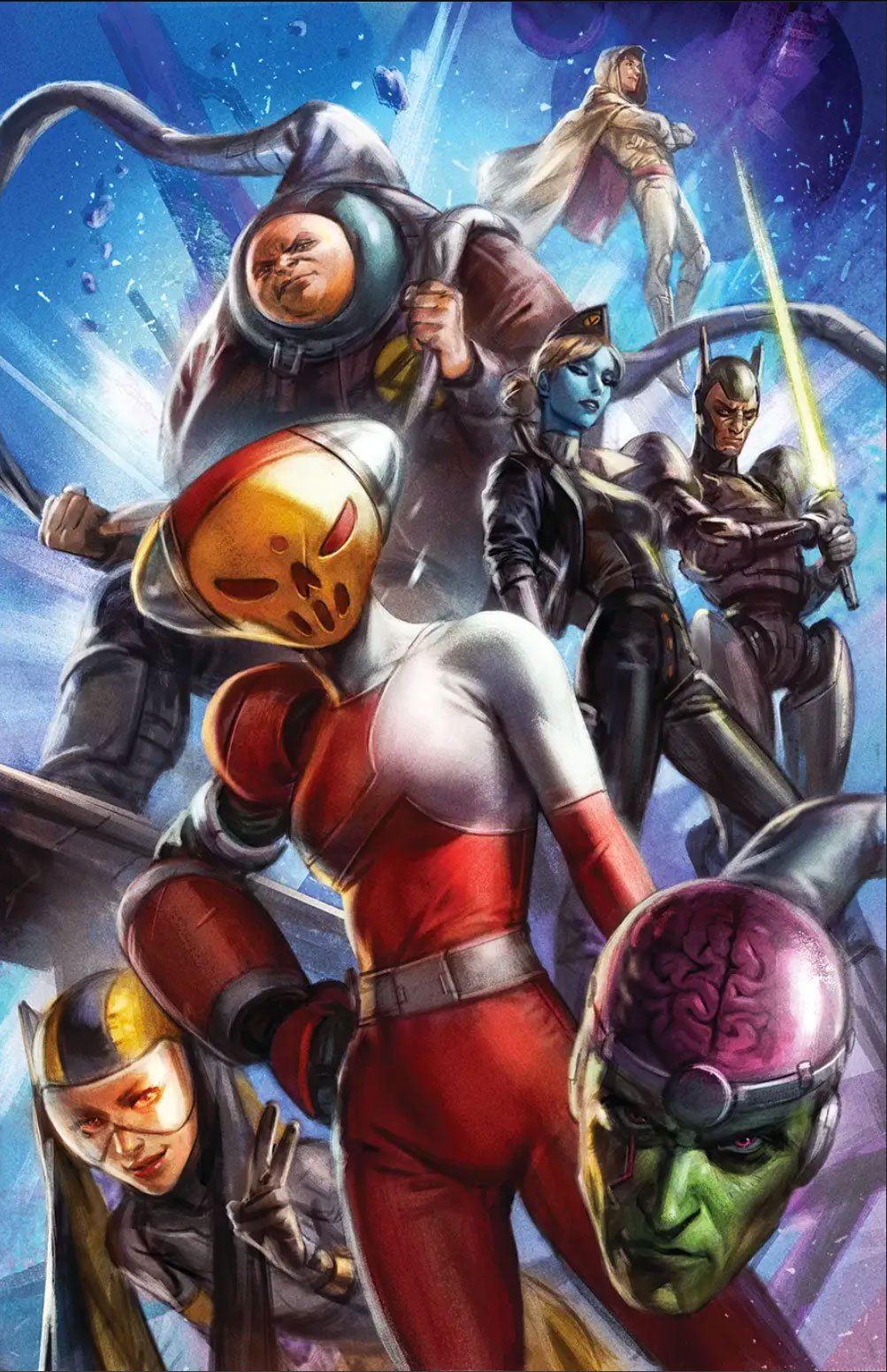 The art, as usual, is stellar. Riley Rossmo brings his usual outlandish, exaggerated style to the newly-redesigned characters, but also has a chance to draw a few scenes with the Ryan Sook designs in flashbacks and shows he’d have been just as welcome as a series regular artist as he is as a guest artist. Plascencia’s colors are a perfect complement to Rossmo’s pencils and inks, providing a bright, yet slightly unsettling tinge to the chaotic future universe. 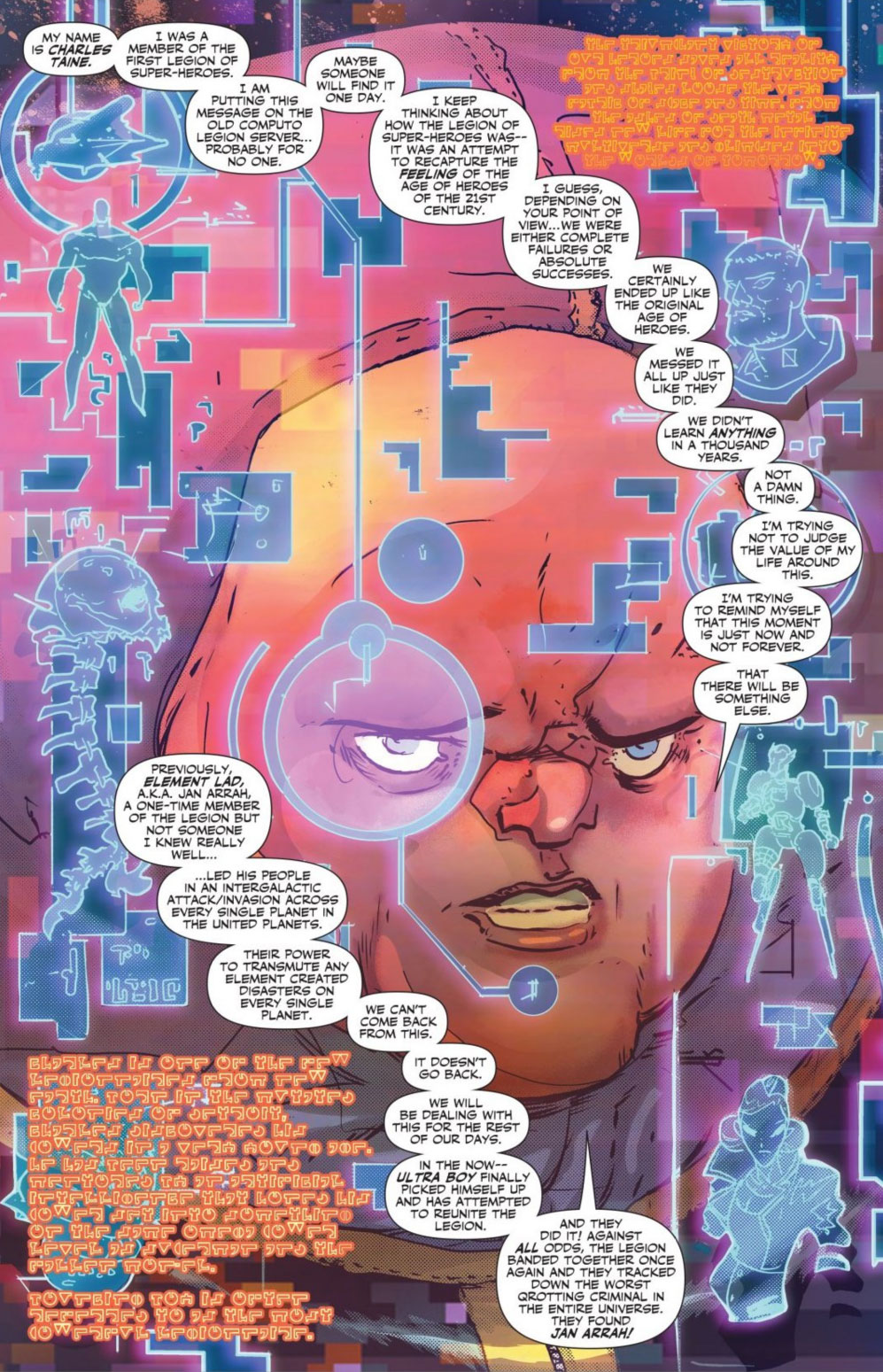 In the recap page, Bouncing Boy tells us what the disaster alluded to last issue was (which is probably a portent of narrative shortcuts to come). Element Lad’s people on Trom (who are still alive! Something we hadn’t known prior to Future State) went on a bloody rampage across the galaxy, destroying everything and tearing civilization apart. 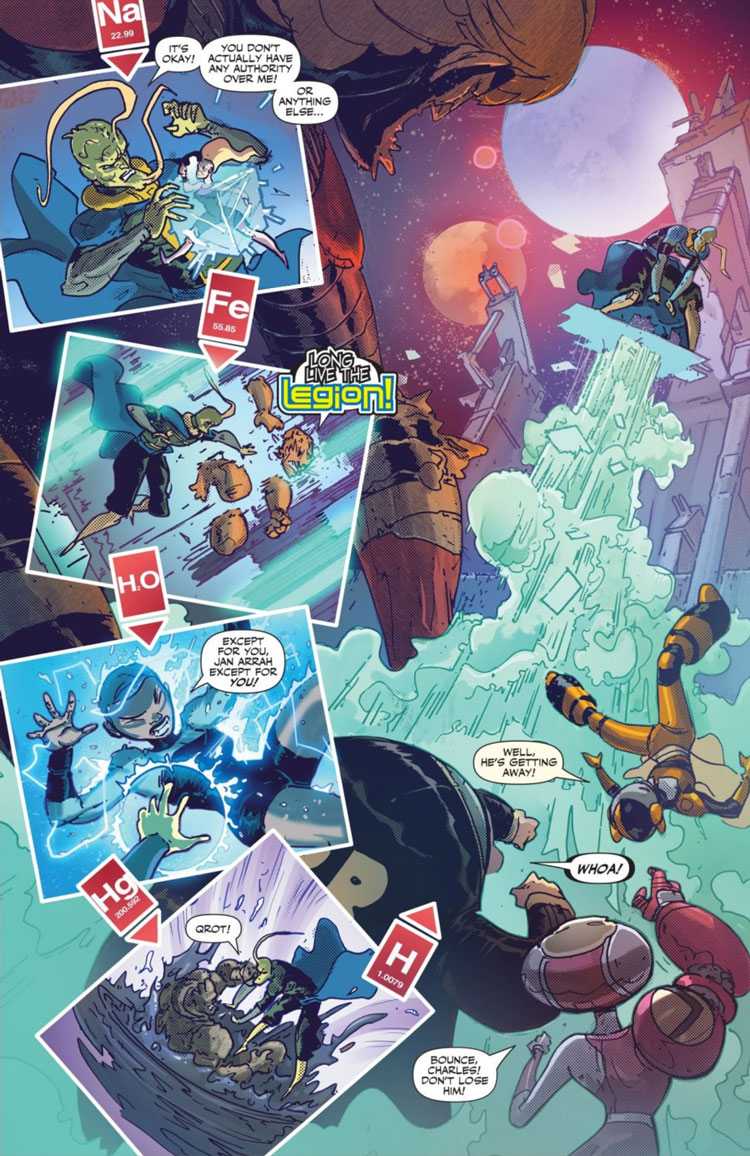 This is a cool page where they show everyone fighting Element Lad and use tags to show what elements he’s making in each cutaway panel. Would have been nice to see this kind of thing in the main series, but we didn’t get all that much of Element Lad… 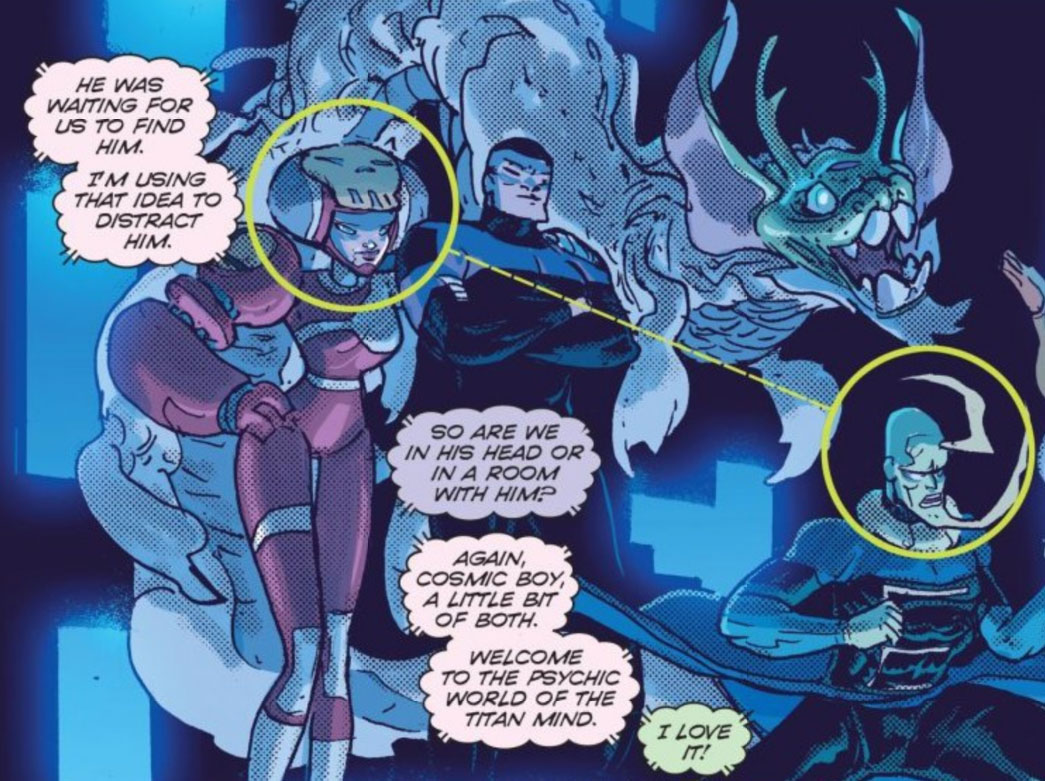 More cool Saturn Girl stuff, which we DID get a lot of during the main series. A psychic world inside her mind where she can hang out with others and explore Element Lad’s thoughts.

But… Shadow Lass is on the team, and isn’t indisposed so far as we know. So why not just send her? Why go through the extra stop of sending Chameleon Boy in disguise? 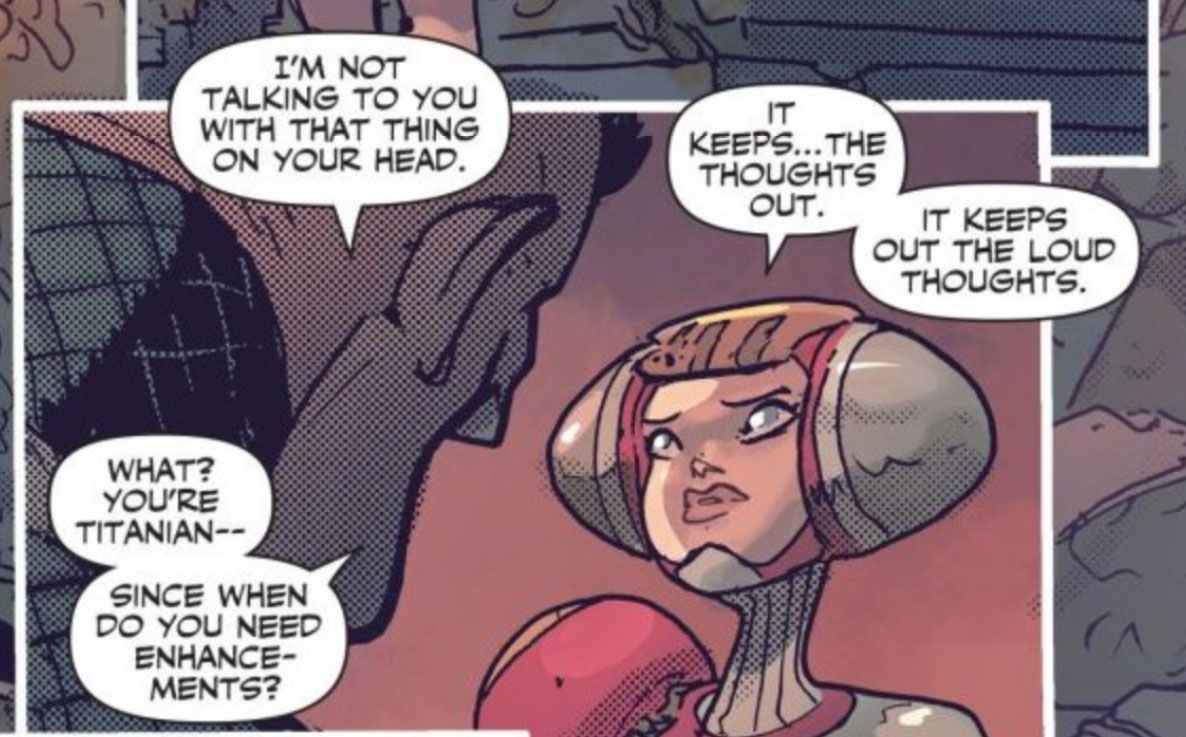 So Saturn Girl’s new skull-pill helmet isn’t just fashionable; it’s for keeping certain thoughts out of her head. This comes back later. 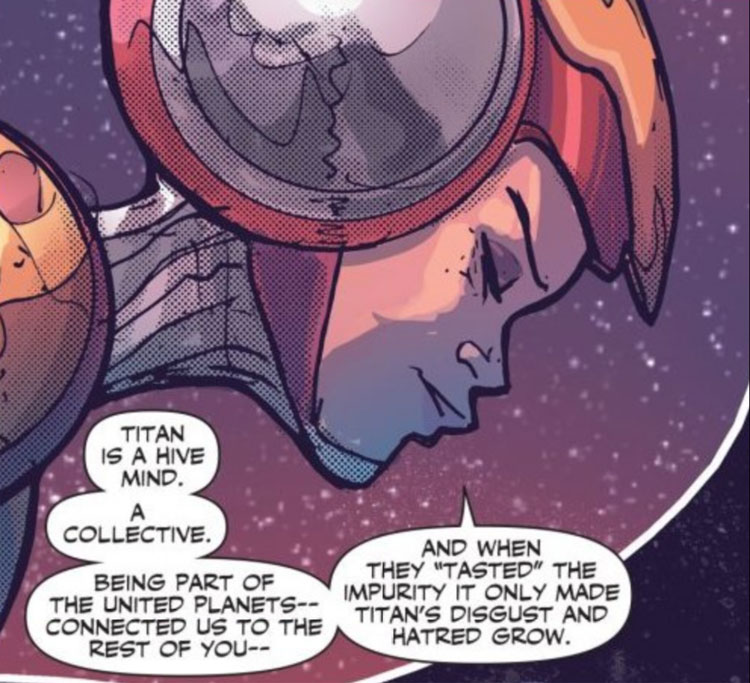 So Titan turns out to be the bad guys, a hive mind that decided the galaxy needed to be cleansed. They manipulated the Tromites and used them as the army and scapegoats to tear the galaxy apart, presumably for the Titanians to then step in and put back together according to their own design. Sinister! 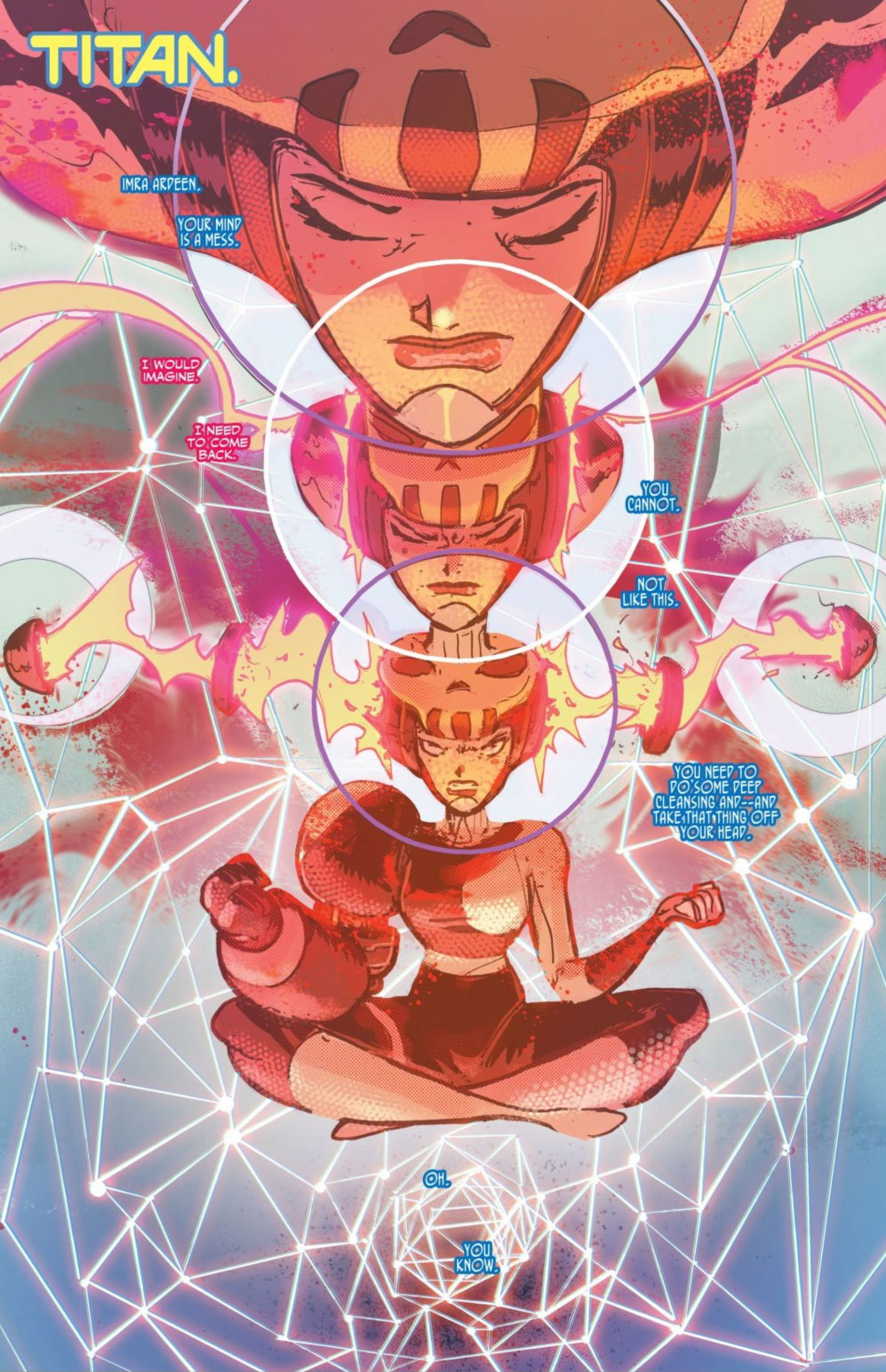 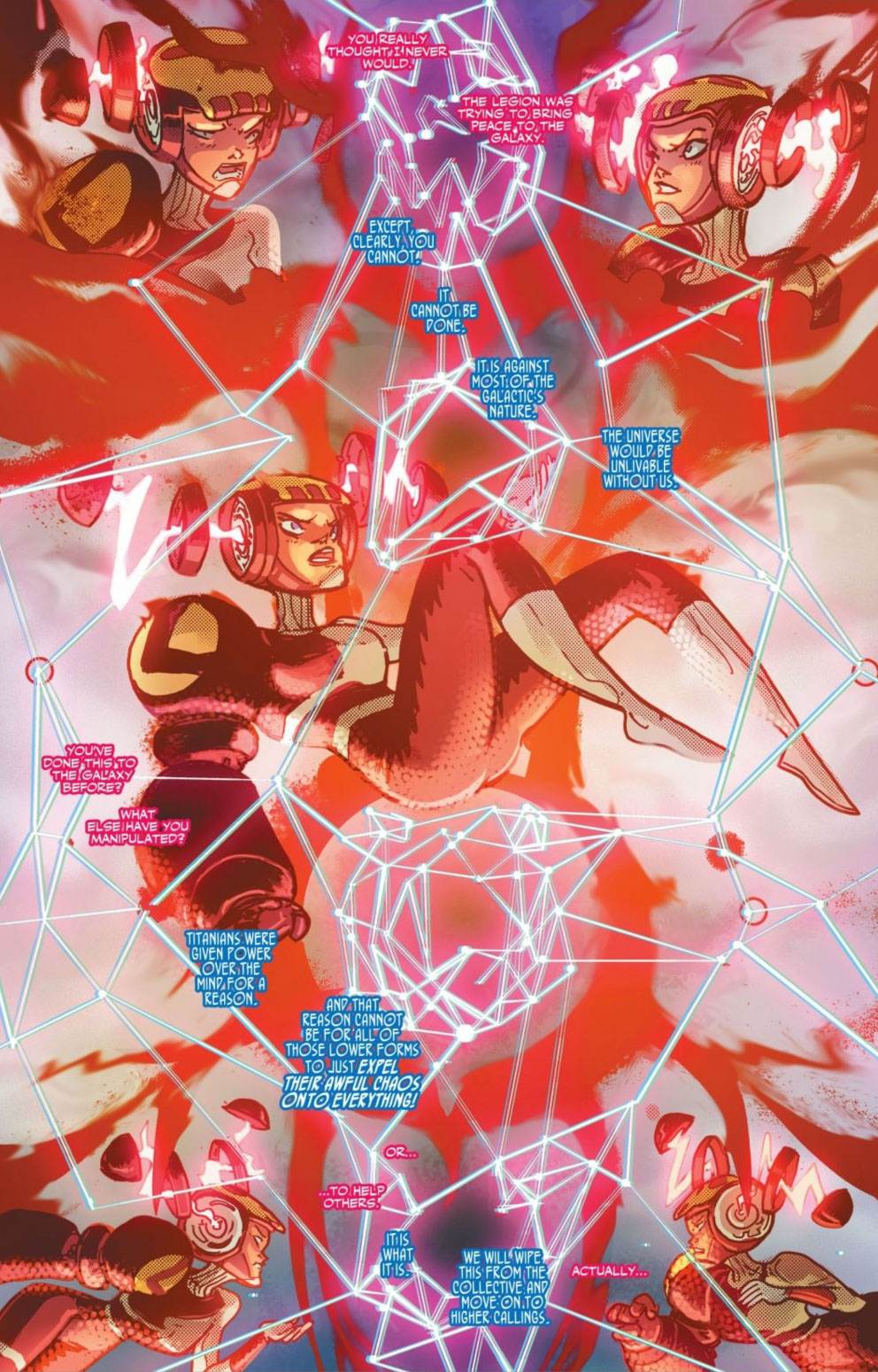 Wow, what a great plot hook! Introducing a new, frightening, unknowable foe, with vast powers and hellbent on universal subjugation! Plus, one of your leads is a rebel Titanian, giving the whole conflict a great personal connection! This could be a strong basis for at least a year or two of plotlines. Heck, you could probably write a series that lasted decades using Titanians as on-and-off villains. The possibilities are endless!

…And just like that, it’s all over. In the space of a single page, we get dialogue that tells us how the Legion, off-panel, completely and totally resolved this galaxy-wide menace. Yay, I suppose? 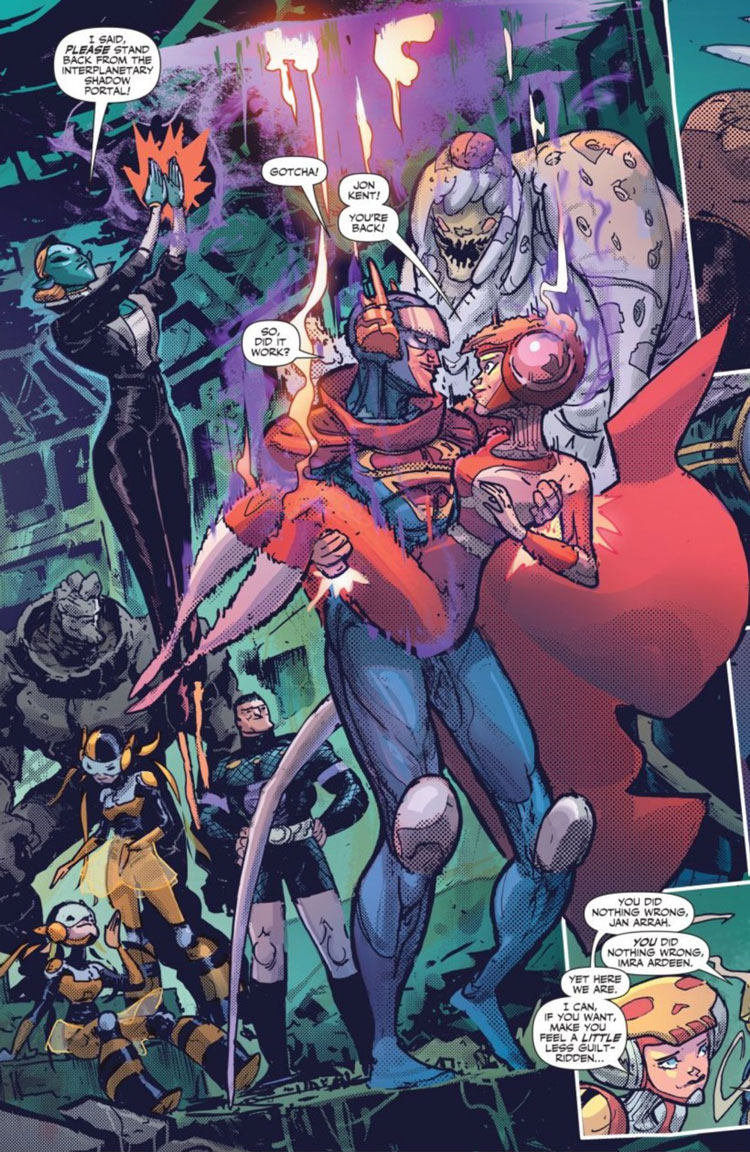 We end on one last note of confusion, as Saturn Girl expresses surprise that Jon Kent is back, when he was in the final-page splash at the end of the last issue, and so far as we know he never left. He’s grown up now and has a little Gomez Addams-style moustache. Good for him.

And that wraps it up, for this issue, this miniseries, and this run. A lot of good stuff, and a lot of promise of good stuff that was never to be. Oh well. 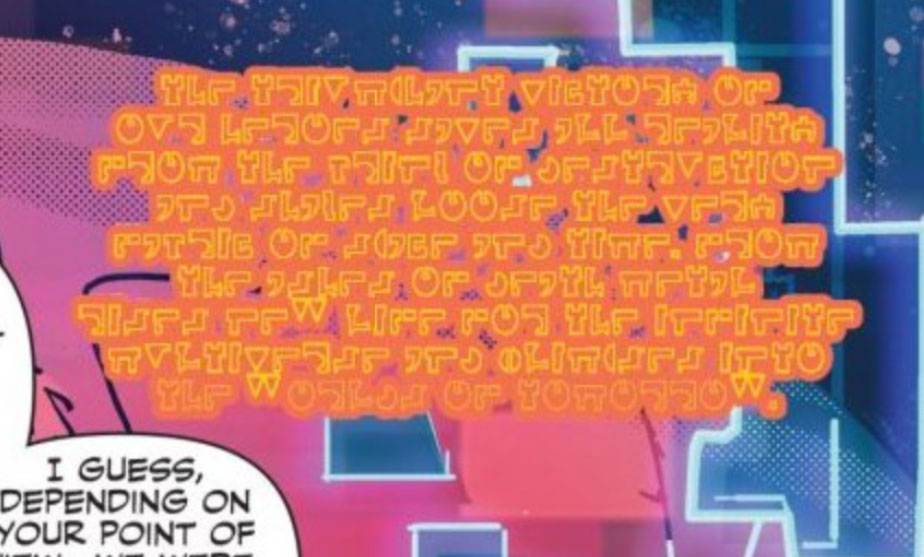 The triumphant victory of the heroes saves all reality from the brink of destruction and shakes loose the very fabric of space and time. From the ashes of Death Metal rises new life for the infinite multiverse and glimpses into the worlds of tomorrow. 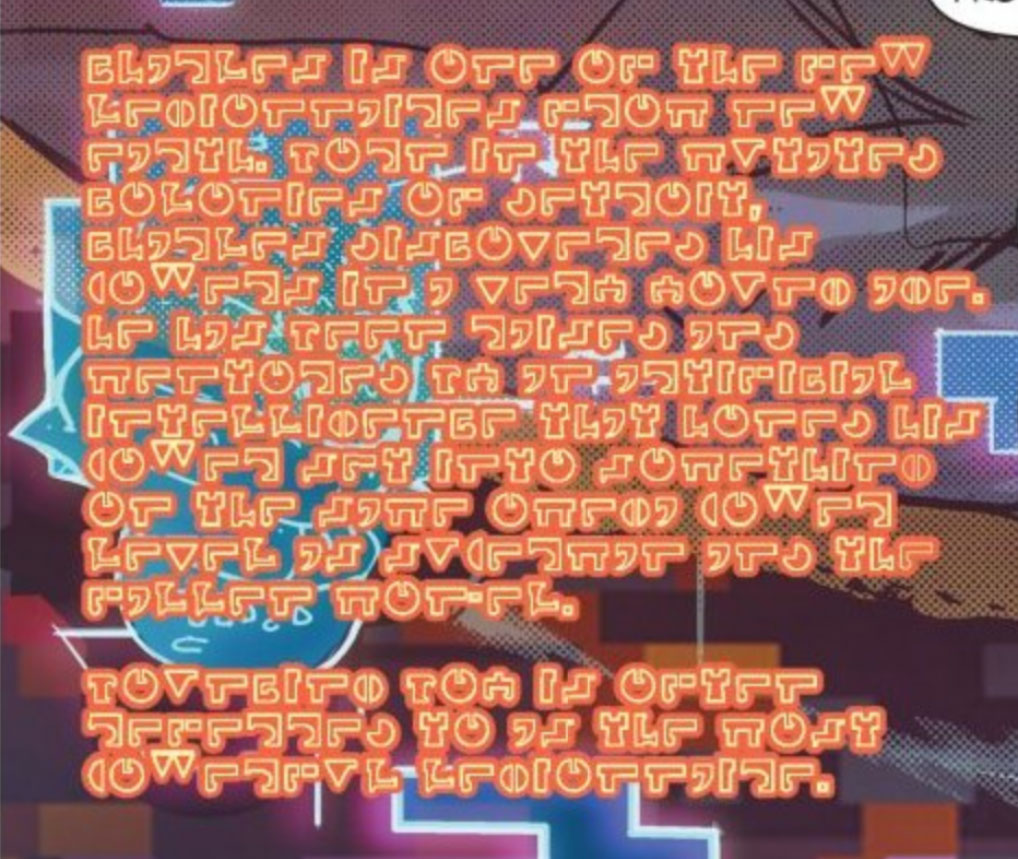 Charles is one of the few Legionnaires from New Earth. Born in the mutated colonies of Detroit, Charles discovered his powers in a very young age. He has been raised and mentored by an artificial intelligence that honed his power set into something of the same omega power level as Superman and the fallen Mon-El.

Bouncing Boy is often referred to as the most powerful Legionnaire. 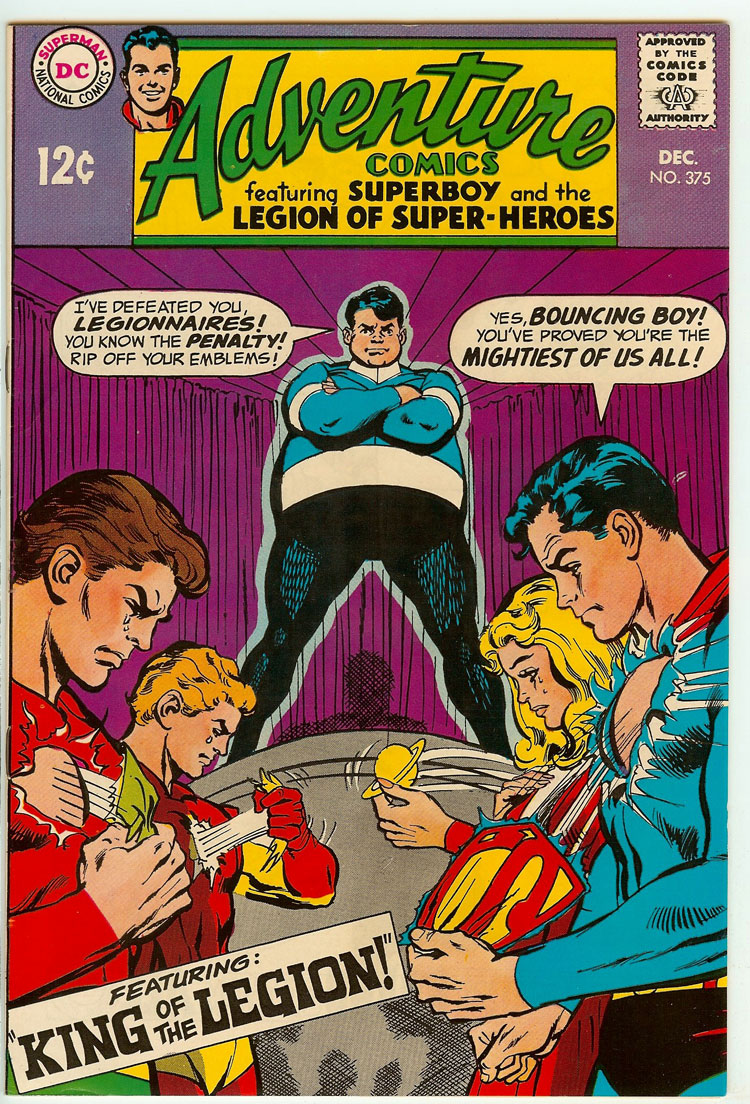 Hey! One final reference to a classic Legion story…