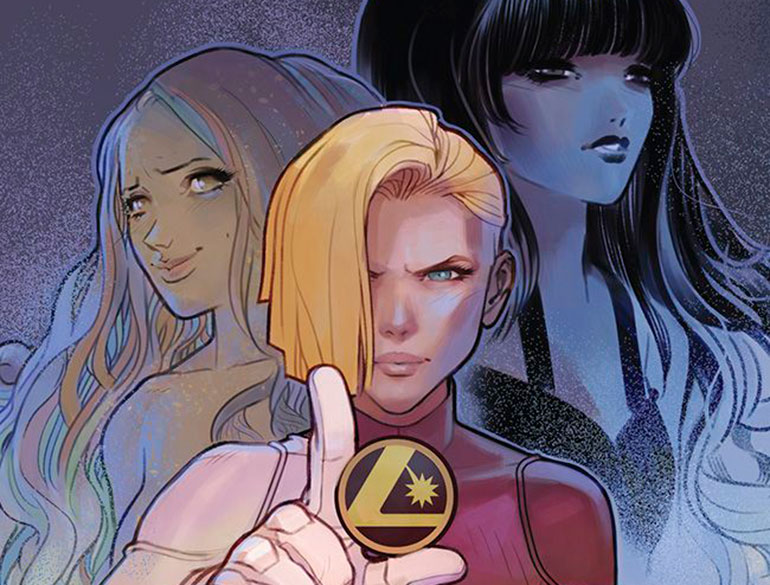 All across the Galactic, Legionnaires interact and plots advance in this tenth issue of Legion of Super-Heroes.

We’re settling back in with regular artists Ryan Sook, Wade Von Grawbadger, Jordie Bellaire, and Dave Sharpe as we move out of what broadly seems to have been the first “phase” of this new Legion series and into whatever’s coming next. The characters are now a little more familiar and it feels like we’re finally finding our feet with the new Legion just as larger machinations begin to take shape. 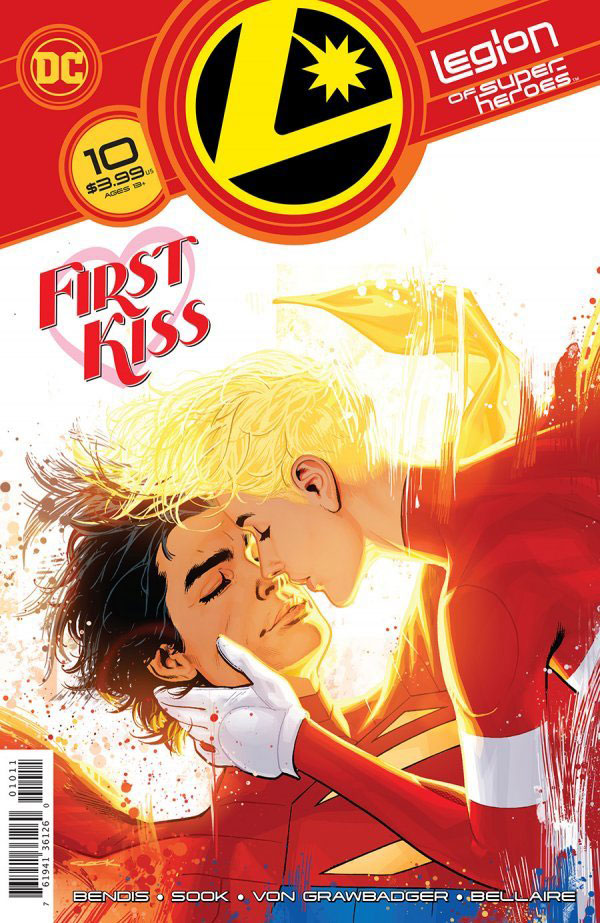 All art by Ryan Sook

The issue intercuts between four sets of Legionnaires on six different planets. Superboy and Saturn Girl enjoy their first date on Planet Gotham, which is soon interrupted by news of Mordru.

Brainy and the Gold Lantern take Krav to Oa to face justice, and while there discuss the impending Great Darkness with the Elders of Oa.

Later, Brainy has a chat with Lightning Lass while researching the various Lantern Corps.

Cosmic Boy leads a team to Rimbor, where he unexpectedly finds himself taking on new responsibilities, while a team heads to New Krypton to try to bring back Mon-El.

Meanwhile, something sinister is happening on Xanthu.

I feel like the disparate elements of this issue really came together in a satisfying way. Some of that’s aesthetic; I loved the establishing shots of the various planets, including the graphic design of the font used, in both English and Interlac. In a way, it reminded me of David Lynch’s Dune.

We gradually get some more characterization of the various Legionnaires, and it was accomplished through actual interaction rather than somewhat ham-fisted origin story-focused exposition. It also felt like various plot threads were advanced in meaningful and interesting ways, hinting at big things to come.

In a way, this issue reminded me of some of my favorite issues from Great Darkness Saga-era Levitz/Giffen Legion. We check in on characters in multiple locations as threads interweave, getting snapshots of their thoughts and relationships, all while moving toward something big on the horizon. It doesn’t seem to be a coincidence that the big impending doom the Legion is so concerned about is the Great Darkness.

This is probably the most satisfied I’ve been with an issue since the start of the present run. I’d say, with some small caveats, I’m fully along for the ride now and ready to see where the series takes us.

I love the detail that the restaurant on Planet Gotham uses a hologrammatic Alfred to serve patrons (non-toroidal) onion rings. 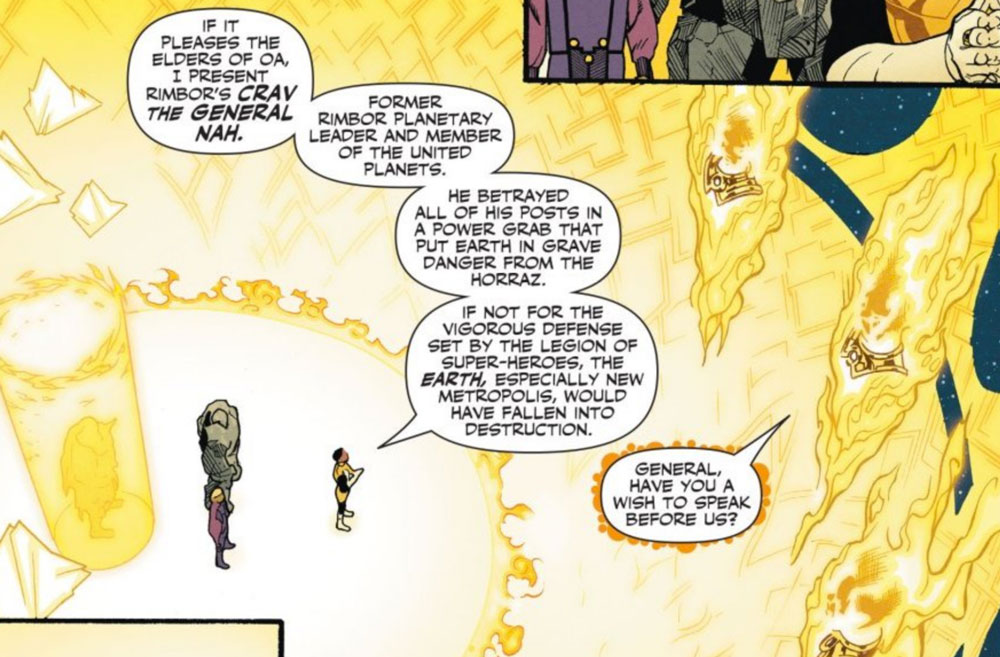 We get a LOT of curious tidbits about the Gold Lantern Corps (if it is a corps) in this issue. To start, they report to the Elders of Oa, these flaming be-collared things.

Second, the Elders of Oa’s ultimate justice seems to involve imprisoning in a pyramid, not unlike Superman: The Movie‘s depiction of the Phantom Zone. 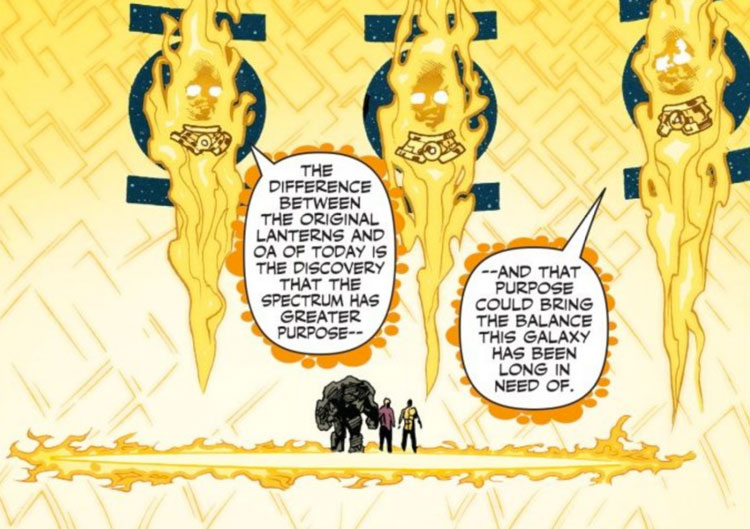 The Gold Lanterns evolved from the Green Lanterns (and, perhaps, other Lanterns?) to serve a greater purpose, though that purpose is as yet unknown…

Also, we learn that the Legion’s Gold Lantern is the sole Gold Lantern for this dimension, which is a pretty broad jurisdiction. 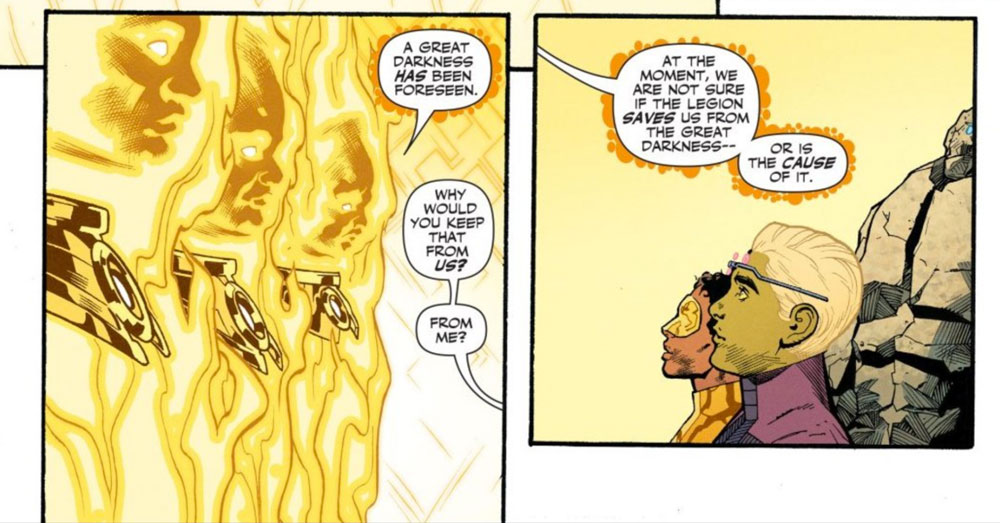 The Elders have some ominous portents vis-a-vis the Legion and the Great Darkness. 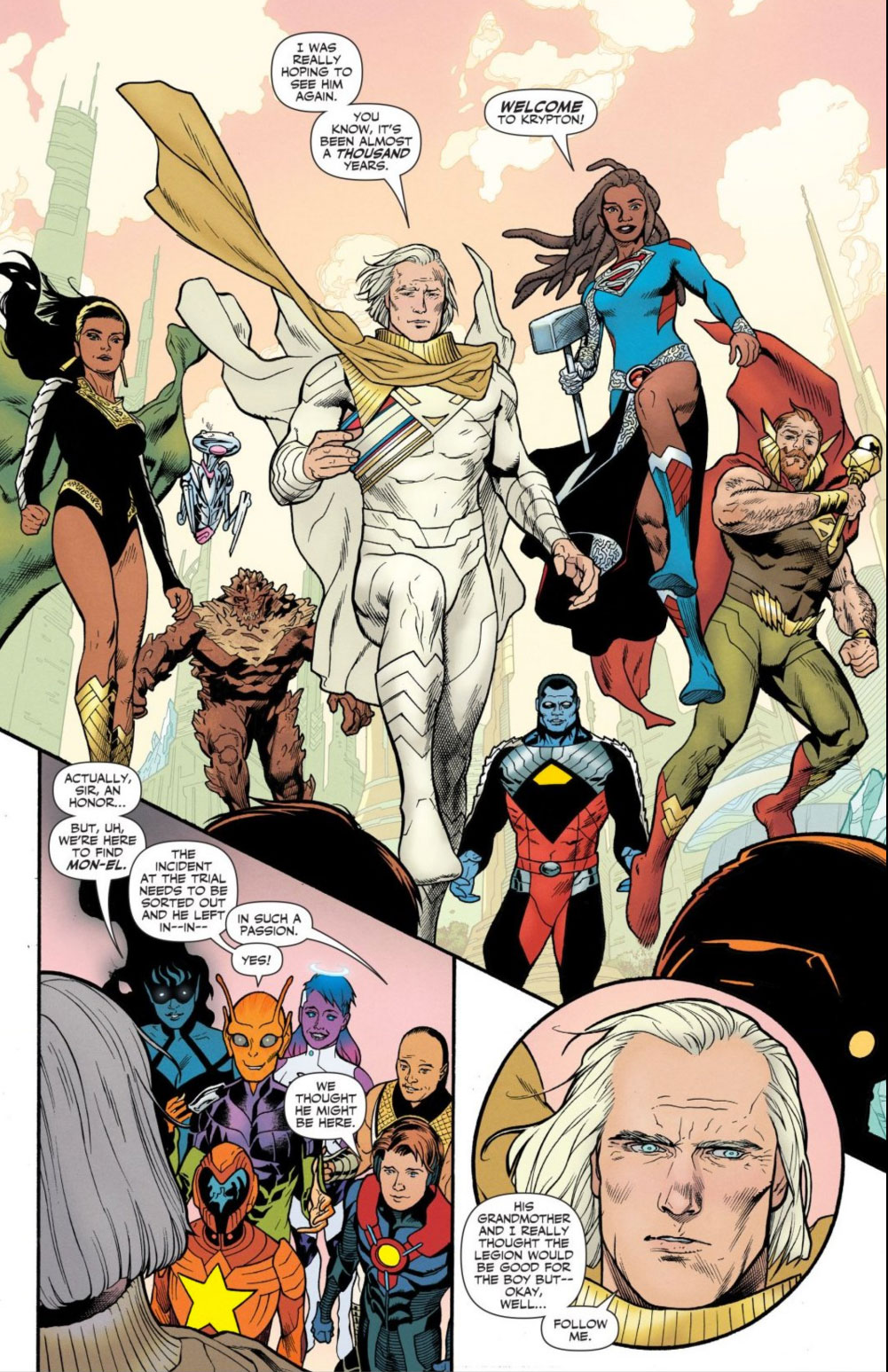 (That guy, if you haven’t been following Bendis’s various Superman comics, being Zod)

On New Krypton, we learn that Mon-El is the scion of Zod (And also, though I didn’t grab a screenshot of it, that Mon has three kids.) 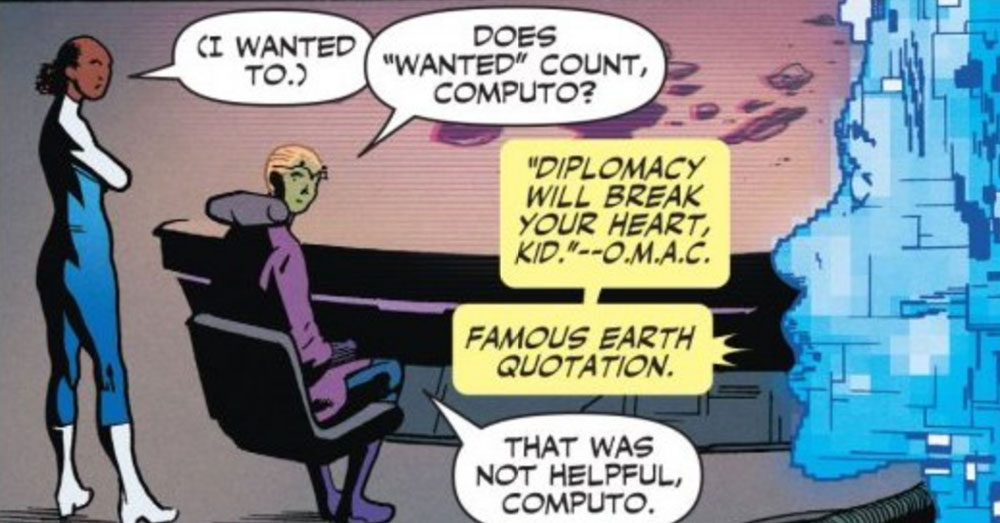 In his command center, Brainy’s watching a bunch of holograms of Green Lantern Corps history, plus some visions that seem to involve the formation of the Gold Lanterns. Interesting…

I gotta say… I’m a bit uncomfortable with the Kirby paraphrase. 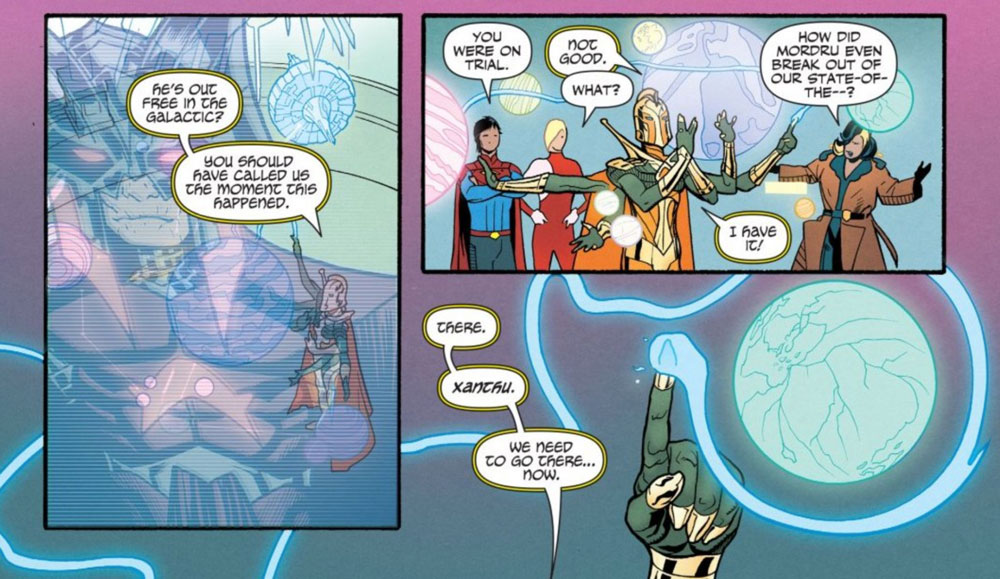 We get some sweet Dr. Fate action in this issue, and we learn that something bad is going down on Xanthu, which you will recall is the classic home of Star Boy (and the real heads will remember it’s also the home of the ill-fated Kid Quantum in the Reboot Legion)

Ultra Boy is set up to be leader of Rimbor and the Legion, which will be quite the juggling act.

And that about wraps up what I found notable, other than the Last Page Surprise, which I wouldn’t feel right discussing. Good issue, see you next month!

Only one notable block of Interlac text this week (other than planet names, which have english superimposed), but it’s a big one:

Martial arts are a highly organized set of systems and traditions of combat practiced for a number of reasons. They were first developed in ancient times for self defense and law enforcement. And then, later, competition. Most use them for physical, mental and spiritual development. For many parts of the galactic it is a cornerstone of the preservation of intangible cultural heritage. They have become a large part of a variety of galactic cultures including New Krypton, parts of Planet Gotham, Winath, and of course the Japanese outpost of Jupiter which is about to start its millennium celebrations at the end of the year.