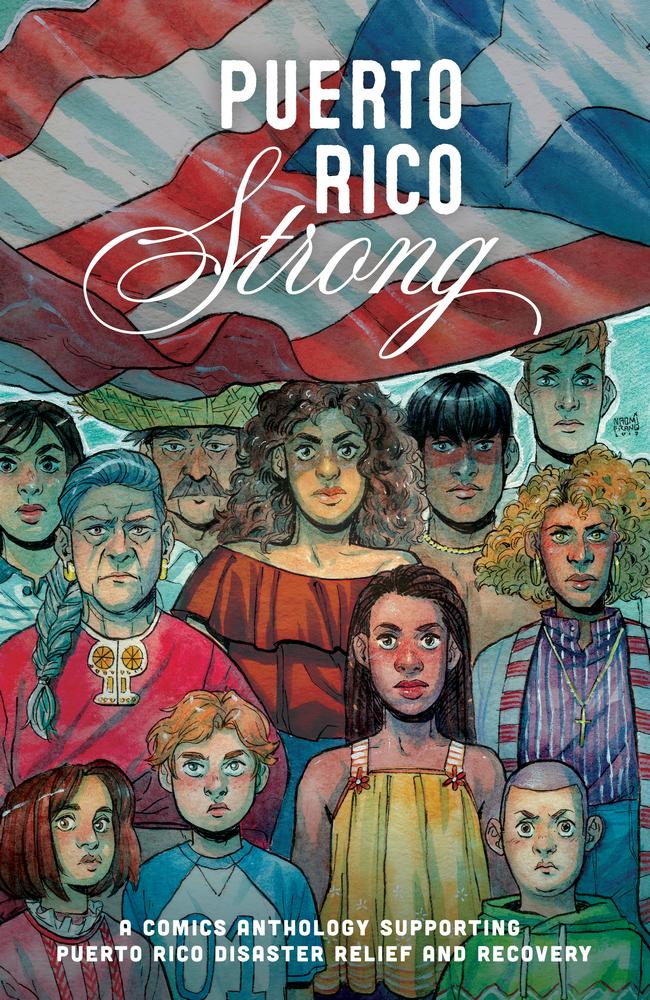 ST LOUIS, MO–Just over two months since Hurricane Maria plowed through Puerto Rico with a destructive force that left island residents desperate for survival or forced to flee to the U.S. mainland, the island is still struggling to rebound. Today, the St Louis publisher announces their commitment to relief efforts with the publication of Puerto Rico Strong, a comics anthology from some of today’s top talent!

Puerto Rico Strong is a comics anthology that explores what it means to be Puerto Rican and the diversity that exists within that concept, from today’s most exciting Puerto Rican comics creators. All profits will go to towards Disaster Relief and Recovery Programs to Support Puerto Rico. Puerto Rico Strong is co-edited by Lion Forge’s own Desiree Rodriguez, alongside Marco Lopez, Neil Shwartz, and Derek Ruiz.

“When a particular area of the world is struggling, it is everyone’s responsibility to find ways to help” says Lion Forge founder, David Steward II. “We at Lion Forge are always looking for ways to bolster diversity of content and creators, and we thought the best way to help the people of Puerto Rico would be to highlight some of the unique voices in our industry with a deep connection to Puerto Rican heritage. We are donating 100% of the book’s profits to the ongoing relief efforts.”

“For many, Puerto Rico is often considered a foreign land rather than a part of the United States. What we hope to accomplish here is showcasing the vast diversity of Puerto Rico of our community and our history” says Lion Forge editor, Desiree Rodriguez. “There are those of us whose parents immigrated from the island, or who have family on the island still, or have never even seen Puerto Rico. We want to explore those stories of struggle and triumph through that lens.”

Puerto Rico Strong will be released at finer comic shops and bookstores everywhere in March 2018.

Desiree Rodriguez has been an entertainment and comics journalist for eight years writing for sites such as: The Tempest, The Feminist Wire, Women Write About Comics, and The Nerds of Color. Boricua extraordinaire, Desiree has written and curated various Latinx centric discussion pieces and movements to discuss and educate on the Latinx experience in comics.

Marco Lopez is the creator of the webcomics Massively Effective, A Shot of Whiskey, and Orion’s Belt, which lead to his working with Lion Forge Comics and Zenescope Entertainment. In the coming year, he will be working with a known indie publisher as an editor and releasing a number of creator-owned projects.

Derek Ruiz is a born and bred Nuyorican, began his career in comic books writing The Legend of Isis for Blue Water Productions before going to work at Dabel Brothers Publishing where he became the writer, editor and publisher he is today. As a writer at Dabel Brothers, he has helped bring to the comic medium best sellers such as Dean Koontz’s Fear Nothing, Paulo Coelho’s The Alchemist, and Becca Fitzpatrick’s Hush, Hush.

Neil Schwartz, a long time comic book enthusiast, brought his passion for comics into reality by working at both Dabel Brothers Publishing and DC Comics. Although he has since transitioned from those positions, he continues to keep his love of comics alive by writing in his free time.

Lion Forge Comics strives to publish comics that everyone – regardless of background or ethnicity – can identify with. The original graphic novel Andre the Giant: Closer To Heaven was nominated for three Glyph Awards, as well as the Dwayne McDuffie Award for Diversity. Lion Forge Comics also includes the Roar imprint for young adults and the CubHouse imprint for readers twelve and under. It is also home to the Magnetic Collection of premium and critically acclaimed comics and graphic novels, boasting multiple Eisner Award nominees. From licensed properties, including Dreamworks’ Voltron Legendary Defender, original work from top independent creators, and the original and all-inclusive Catalyst Prime superhero universe, there is something for every level of comic fan, young and old, across multiple imprints and formats.