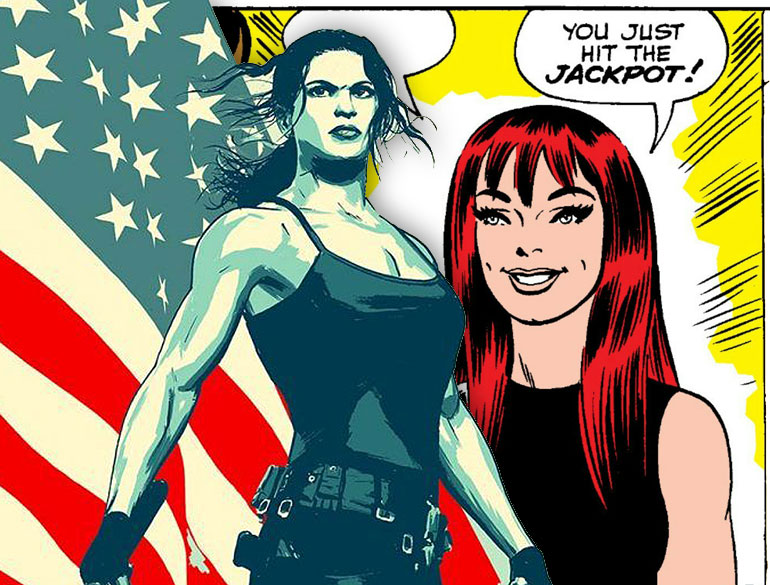 Should be easy enough, she’s been around since 1965. That’s over 50 years of Spider-Man storylines to draw from!

Got an answer? It’s probably a small-paragraph in length, right? Nice job.

Now take that small, fully-functional paragraph and remove the words “Spider-Man,” “red hair,” “Kirsten Dunst, and “wife.” Not much is left, is there? How come? 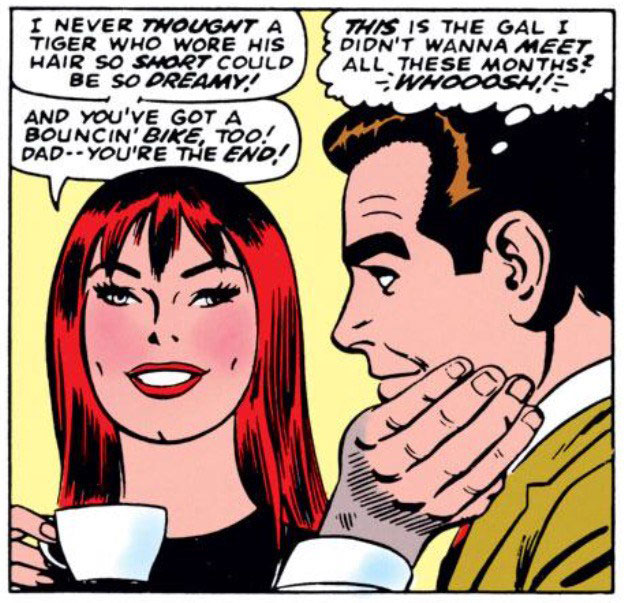 Well for decades, that paragraph you just wrote was the skeleton for almost every female character that had speech bubbles. All you had to do was Mad Libs those nouns and adjectives I told you to take out. These characters’ only functions were to be captured, rescued, and, in latter days, to promise her bedroom to the male character.

Why else would the hero train for hours, journey across some sort of hellscape, find a McGuffin, fight a dragon, and wear a cape, if not to save the woman he loved?

Mary Jane was no exception to this. Again, she’s been around since 1965 and for the most part, we rarely got to know who she was outside of the sweet and tender (yet Mephisto-corrupted) relationship with Peter Parker. That was life for Mary Jane and her pencilled colleagues until about the 1980s and 90s.

And by that point, the whole swinging across rooftops into a bedroom shtick was wearing thin for the comic book crowd. Many fans started to realize that their favorite cape and cowl story was really only about some dude trying to get the girl and a newfound Nirvana-based intellectuality demanded more. 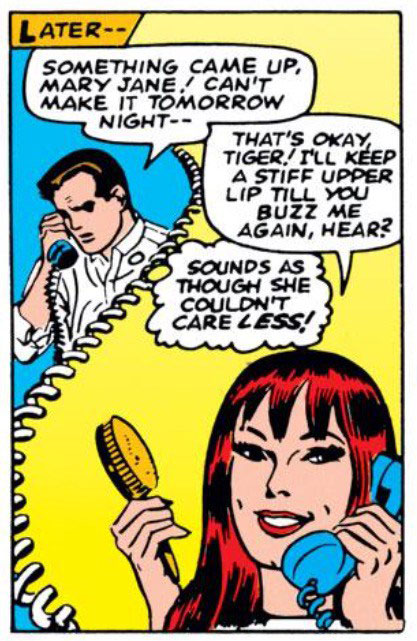 They wanted their culture of punk and grunge — a philosophy best known for confusing shallow melancholy for enlightened introspection — to seep into their Spider-Man and Batman stories. They wanted monthly updates of morally-grey, sometimes depressing storylines where the hero struggled with their angst and emotions before resolving the arc with theatrical brutality.

Writers heard this call but figured the best way to do that was to victimize all the women. And so, women were thrown into coffee tables, refrigerators*, and graves just for that splash page where our ever-masculine hero, high on a cocktail of desperation, sadness, and anger, could flex and shout “MY FEMALE!”

*For a deep-dive analysis on this phenomenon, check out Gail Simone’s Women in Refrigerators archive.

It wasn’t until that decade of excess and violence was over — and more outspoken women writers and critics hit the scene — did people realize that the female narrative in comics was limited to either laying or dying. The comic book community tried in vain to defend itself. It shouted names like Rogue, Wonder Woman, Psylocke, and Ms. Marvel, but truth was drawn in the panels, even for those characters. 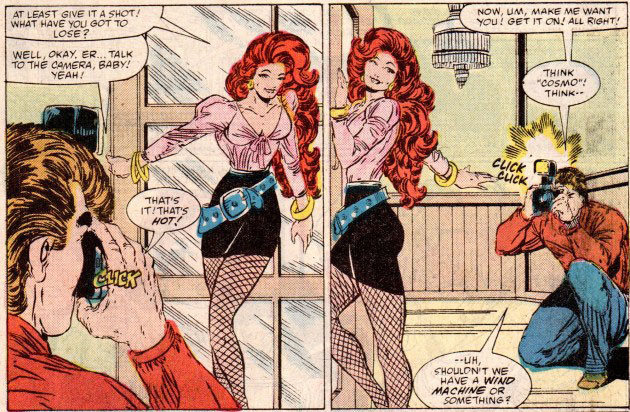 Every time someone found a great Psylocke moment, five people would bring up the infamous towel scene with Cyclops. Whenever Rogue or Wonder Woman took charge, we were reminded of just how suggestively they were dressed. No matter how accomplished Captain Marvel was as an Air Force lieutenant, a NASA scientist, and an Avenger, someone in the crowd would shout, “Marcus.”

Much of our community realized that every positive example of a female character or moment had a disqualifying factor and that every female-centered storyline was either overly violent or their history was derived from heinous, borderline-depraved, plot points that centered the men in the story. We were as bad off as the critics said we were.

Meanwhile, Mary Jane was trapped. Her writers seemed to realize that her narrative potential was drowning in a cavalcade of male dependence, sexualization, and brutality — and that she needed saving. The cruel irony was that Mary Jane was very used to this feeling. I mean, how many times has Mary Jane been in some sort of death trap, waiting for a savior? 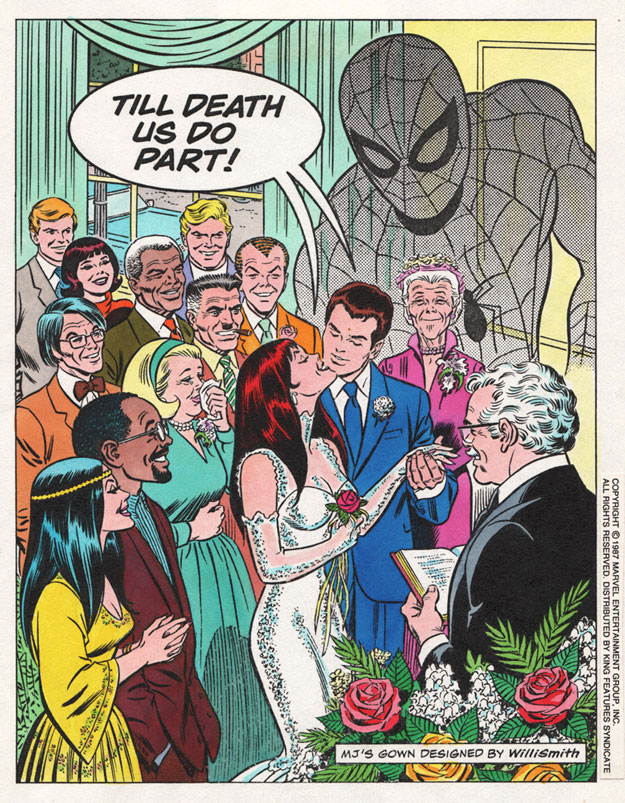 But thankfully, writers this time didn’t choose to send Spider-Man to save her. They sent her cousin, Mary Sue.

The Mary Sue, in her many incarnations, has the power to do anything she damn well wants. While she generally comes from humble beginnings, she eventually comes to have super strength, teleportation, heat vision, invisibility, invulnerability, and can probably time travel. Along the way she learns about 12 languages, how to hack any computer, triggers a company cross-over event, and gets 3 PhDs while raising her younger siblings after their parents die… in heels. Her boss, the CEO of Patriarchy Enterprises, doubts her. He doesn’t believe she can handle the job, but he’ll soon learn.

Mary Sue is clearly perfectly capable of saving Mary Jane from drowning because she’s probably also great at swimming. The writers made the right choice in delivering her, but many (predominantly male) readers are mixed on Mary Sue. They say she’s not a believable character, that her abilities require logic leaps to accept, and she’s also been given citations for practicing poor storytelling, despite the fact that years of male characters exhibited the same effortless development without question. These critics often note that because she’s capable of so much and so indomitable, that her stories have no tension because we know she’s going to succeed and her journey never feels earned.

But Mary Sue doesn’t rely on men to define her character, she showcases inspirational powers and abilities, and she gives us story beats we haven’t seen before. This is everything we wanted Mary Jane to do, but there are those who still say she’s an incomplete character. 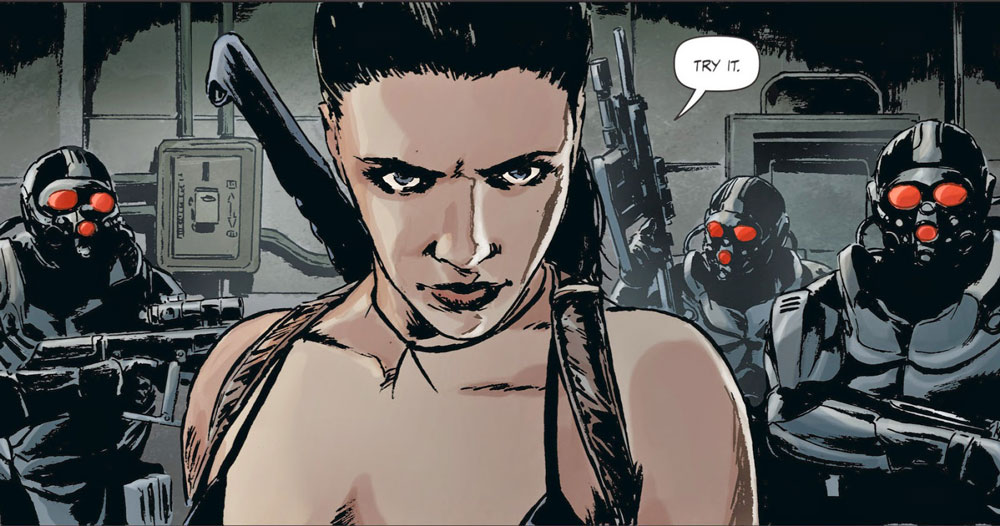 I was baffled and mildly angered by it for years until I read Greg Rucka and Michael Lark’s creator-owned series, Lazarus.

Lazarus tells the story of Forever Carlyle and the charming, post-apocalyptic world she lives in. That world is annexed into different nation-states, locked into a Cold War with each other to see who can develop the best military and amass natural, financial, and human resources. It’s like the dark, gritty reboot of your high school’s Model UN.

Forever’s family, the Carlyles, is one of the few families in the ruling class that governs a nation-state and, like many other families, they use their resources to turn Forever into a genetically-enhanced, immortal, super-soldier/assassin to lead their military operations. It’s standard comic book stuff and words like “super-soldier” should be setting off the Mary Sue alarm in your heads, but Forever does something that many Mary Sues can’t.

Forever’s story isn’t about her abilities. It’s about how her abilities affect her perception of the world around her. 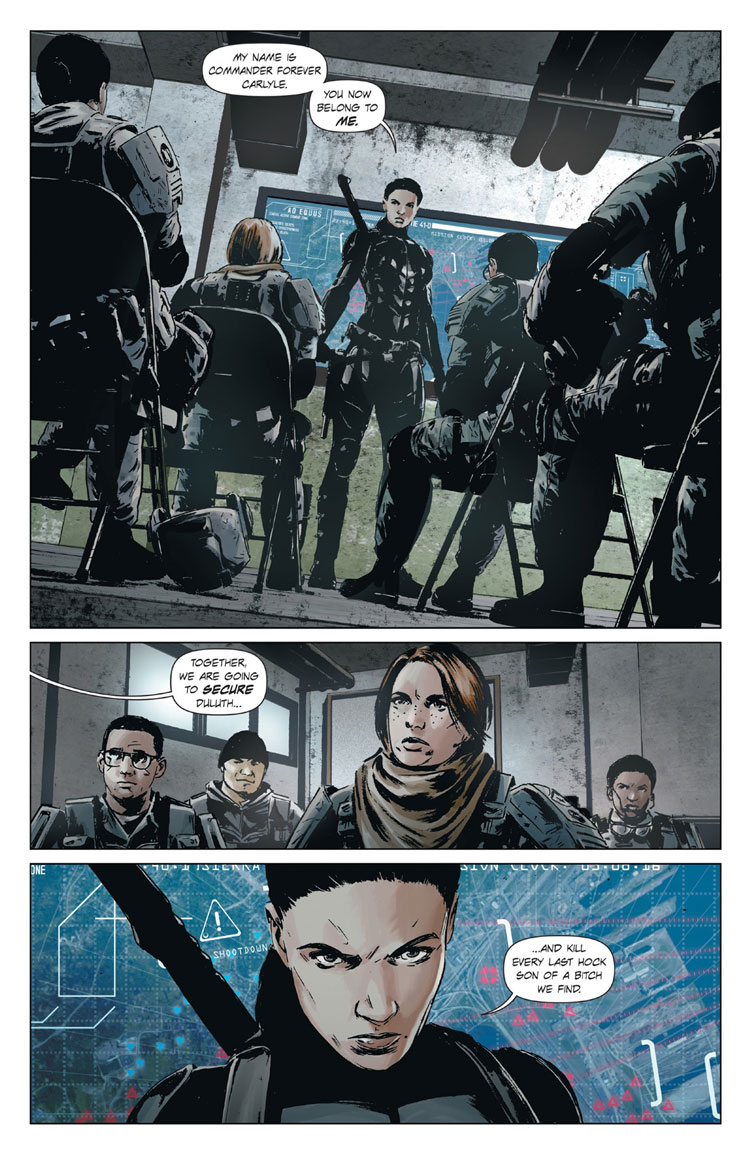 Rucka and Lark don’t really care about showing us what Forever can do — instead they interrogate how she feels about the rampant poverty her family tolerates and instigates within their territory. How does she feel about often having to fight against friends and her beliefs in the name of her family? If she was designed be a blunt instrument for war, does her family really love her?

And by using probably the most common storyline in all of literature, the creators answered the “Mary Sue” question for me. How does Forever feel about dating her counterpart from another family? The character overcomes the Mary Sue/Mary Jane conundrum by simply having a voice that comes from a place of power.

Mary Sue’s stories are driven by her powers. Sue’s writers are so fixated with avoiding the Mary Jane label that they spend valuable panel time compulsively depicting her strengths that the audience never gets more than mere showcases of her abilities. The audience is rarely privy to Mary Sue’s thoughts, feelings, or her personality because Sue’s writers are so petrified of their character becoming a Mary Jane that they forget to even acknowledge that their character is human. That’s why a lot of us can’t connect with Mary Sue.

Forever’s writers, in contrast, use her powers to inform her character. Due to her power and social status, her every action and decision has a direct effect on the world around her and as such must meet each challenge with contemplation and consideration. The audience then comes to know and understand Forever by virtue of how she chooses to exert or sheathe her influence. Forever’s story is not about her power, it’s about how she chooses to wield her power. 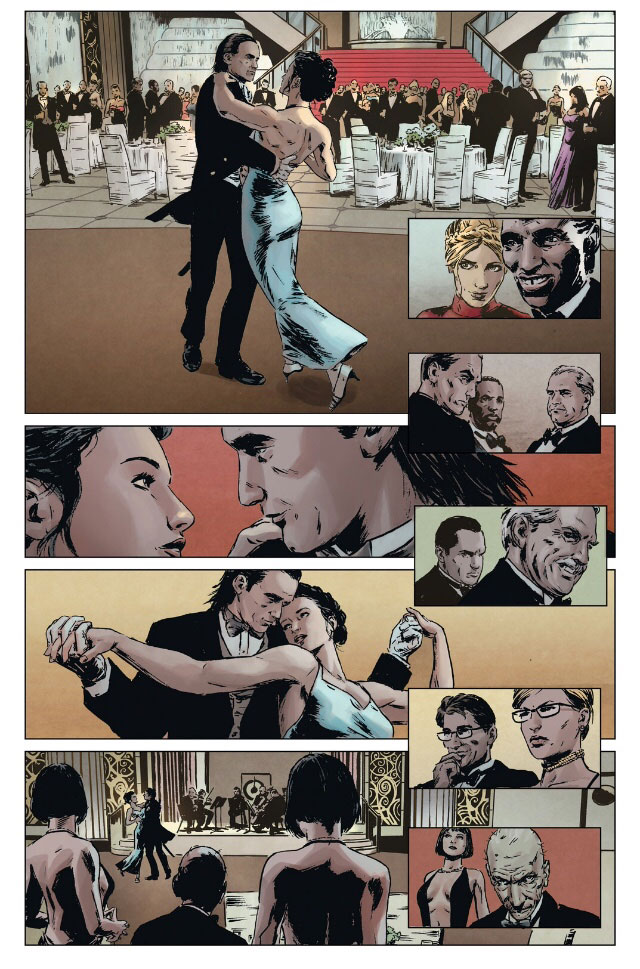 Take a gander at Lazarus #12. (You should read every issue, of course, but #12 sums up everything I love about the series.) There, we see Forever and her family gear up for “the conclave,” which is a big, pomp and circumstance, weekend retreat/pissing contest for the ruling class that gives Greg Rucka the chance to show us every multitude of Forever.

First, she shows her intelligence when she advises her father on how to politically maneuver. Then he reminds us she’s not a woman to be trifled with, when the issue cuts to a training room session. That’s before the issue reaches a crescendo with a bittersweet scene of Forever starting a romantic relationship with a potential political adversary — with the hint of the dire implications this union could bring.

Cue emotional introspective turmoil and in one issue, we are given a portrait of a woman who possesses superior intellect and physical prowess, yet is relatable and human.

That’s the central difference between these two types of stories. Mary Sue’s story is one of a woman with powers trying to stand out in her word; Forever’s is a story of an empowered woman who can change her world. 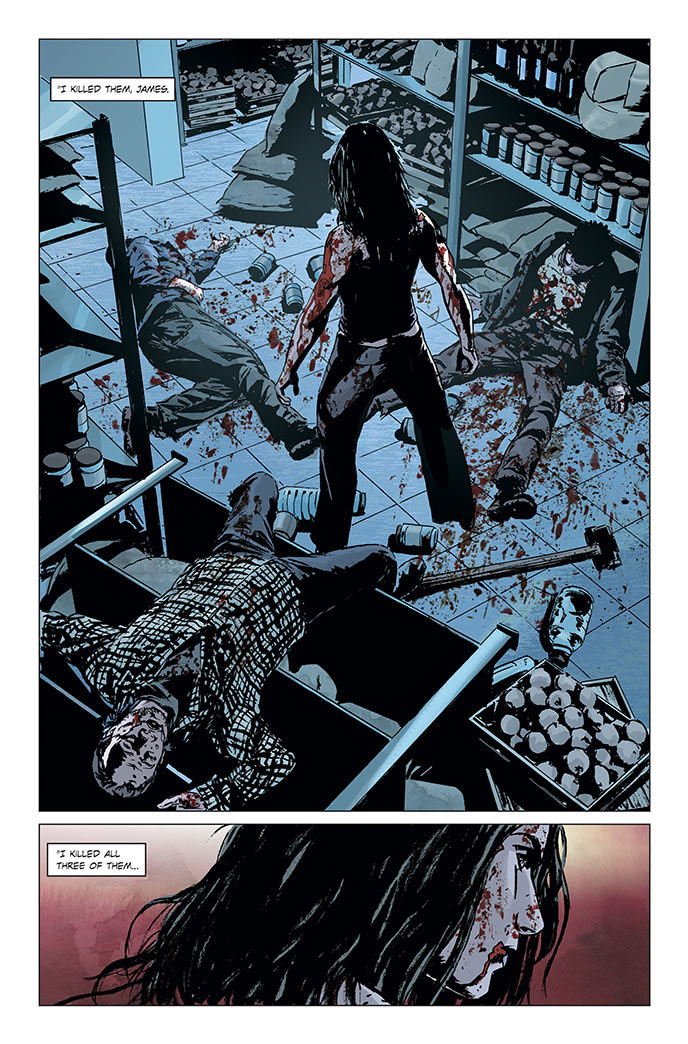 Readers may have very valid qualms with Mary Sue type characters. They can have inherent logical and thematic flaws in their stories. But many are also correct in attaching an implicit sexism to the term when considering that male-centric stories commit the same sins with nigh a demerit. However, the double standard between Mary and Michael Sue doesn’t disqualify the critiques that can be levied at either. So, do we need to story-shame Mary Sue? Do we even need Mary Sue?

The mythology of feminist heroes is certainly in a state of renaissance in 2017, but the narrative is still very raw. We have decades worth of Wonder Woman, Electra, Black Widow, and Jessica Jones, but the demand for female-driven media has never been more apparent and bountiful than it has been in recent years. The onus now falls on writers and creators to provide the supply and bestow new stories, tropes, and archetypes unto an eager audience.

I believe we need Mary Sue to craft these new stories, as much as we ever needed the same kind of archetypes in male super-heroes. We need her ability to do-it-all and be-it-all to take us to places we haven’t been — to inspire the next generation of writers and give them the foundation they’ll need to preach their truth.

Mary Sue could forever be remembered as an overcorrection, but I like to think she’ll be remembered as a necessary one. That we needed to save Mary Jane and give hope to all of the female characters that will come after her.