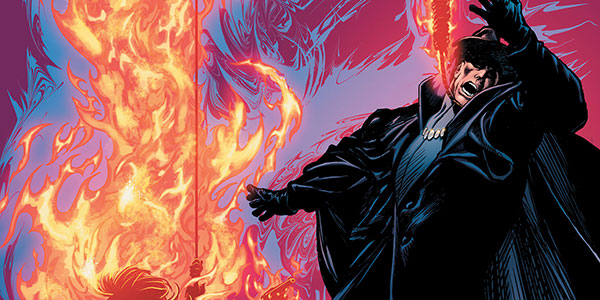 In this week’s Mom’s Cover Watch,  the mother of all comics gives you the five of the best comics covers from the week of December 5th… alright, you caught me. There are more than five covers on this week’s list. However, there are reasons. Sure, they’re flimsy excuses for showing off more comics, but come on! You know as well as I do that more is better, right? Of course! So, let’s get started: 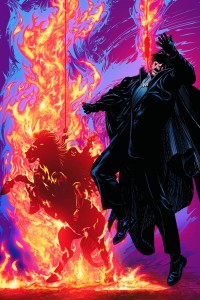 So, the man who ruled the 90s comic covers is digging deep for this issue. Let’s be honest, it’s not the drawing that makes this cover, it’s the colors. Many will be talking about Philip Tan’s variant, however, that just feels like a Halloween cover come two months too late. This cover, on the other hand has heat, movement and tension.

Despite the fact that this cover does not tell the full story of the issue, with Dr. 13 showing up, not just Haunted Highwayman, it still has power. Since I have yet to read the issue, I could easily be wrong, but for once a New 52 cover seems to genuinely reflect events happening in the book, and not a melodramatic metaphor for the feelings.

While covers do not always need to be literal, taking license with the story for the sake of a good cover can create a feeling of switch and bait with the readers (for example, almost every cover from this past Season 8 of Buffy the Vampire Slayer.) It’s something that New 52 has probably done too much of as well. Hopefully, this cover point-of-view is not one of those. 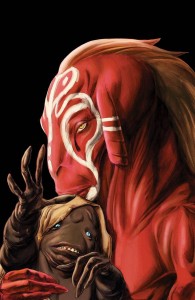 This month’s cover of Storm Dogs could be accused of being one of those covers that doesn’t fully represent the story of the comic. However, technically, both of these characters are in the book, and their parts are equally interesting, though sad to the story.

However, what makes this cover stand out and is so great hits several areas. One, it’s beautiful. Vivid colors, strong definition and nice detail all make it pleasing to the eye. Two, it doesn’t focus on the humans.

Storm Dogs is about humans being the aliens. This cover reinforces that point by focusing more on the “locals” who call this region home. If all sci-fi epics were honest there would be more covers like this. Also, I’m assuming that the “Doll” referenced in the story will show up on a cover later, and that will make for some interesting artwork. 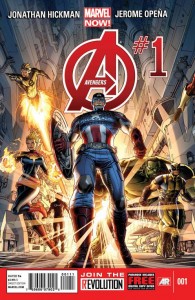 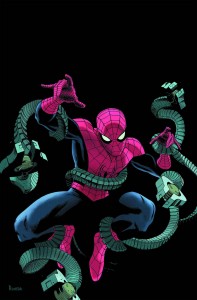 Alright, this is my first cheat (that’s right, I’m cheating twice this week! Enjoy.) I’m listing both of these Marvel titles together with a very specific purpose. It honestly has very little to do with the art. In some cases the Amazing Spider-Man cover could almost be considered throw away, and the Avengers cover leaves you with the feeling of, “Oh, yep, there they are.”

Or, at least, they wouldn’t if it wasn’t for what they meant to the big picture. ASM speaks to one of the gutsiest plot twists we’ve seen in a big two for a while. Really, it would almost be cliché if it wasn’t for the fact that it really hasn’t been done, or done well, in recent memory.

Second, Avengers is a number one issue, a new beginning with Marvel NOW!, and a somewhat new combination of characters (Ms. Marvel now being Captain Marvel and Wolverine striding big on the right.) I normally do not want to choose covers for their subject matter. It should be about the art. However, that’s why I’m cheating. On their own, they’re shruggable, but speaking to the change in status quo (as little as it might be in some other books) for these books is worthy of a place on this list. 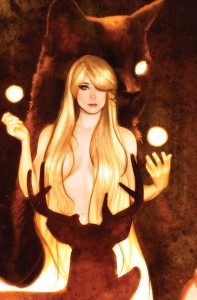 Everyone is aware that Fairest is no Fables despite how hard it tries. I’ve been bored reading comics and have never fallen asleep while reading a comic… until Fairest. I’m the queen of “look on the bright side and keep your doubts to yourself since everyone likes different things.” However, me being blunt about how I feel about this books magnifies what I’m about to say next.

I love this cover. Rapunzel is gorgeous. The animals in the foreground and background (very well in their strategic placement) are intriguing and part of the plot points. Her blond hair in contrast to the brown as well as the dark eyeliner style eyes helps me to focus on her face. Her face, to the cat’s eye and down to the stag create a perfect Z layout for the reading.

Adam Hughes, your covers on this series never disappoint. 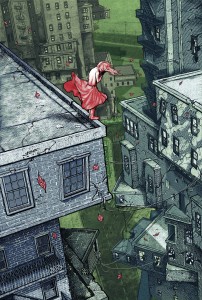 This is one crazy comic.

No, really, it’s about a former asylum inmate who can cure other people’s madness by “entering” it. There are other supernatural elements as well, so I cannot speak to its legitimate view of mental illness, but the cover art has just been amazing. The cover to issue #1 was just unnerving.

Now, with an almost an M.C. Escher quality, you have buildings with unsure height and vantage points. There is a single female figure in red against blue and green. One can only assume this is the person whom Declan (I love that name, Declan!) has to help make whole. The use of color wheel sets you off-balance in the best way possible and entices you to read.

It’s a very different and grown-up feel for an artist who previously has give us fun style covers such as The Guild.

It’s George Takei, in a comic. The man who was already beloved by audiences simply for his Star Trek persona went a step further and showed this world his jolly humorous side by taking over the internet.

From Facebook, to Twitter he has shown his punny side. Yes, I said punny, and I meant it. The man is followed by millions, not just because of his status as a cultural icon, but because he hones in on internet memes as if it was an art style, then adds his own puns to help them step up a notch. I know he is not the writer on the issue, but even the cover shows a “Georgism.”

There are more serious sides, such as on stage  where Takei has told the tale of Japanese internment during WWII with the musical Alligence.

No matter your political views, George Takei is an endearing personality, and it’s past due for him to appear in comics. Enough said.