Welcome to Mom’s Cover Watch, a weekly feature highlighting five of the best comics covers from the week, as decided by Comicosity’s mother of all comic book readers, Jessica Boyd. I’m also known as the “Moms Read Comics” advocate on Twitter and Tumblr.  Check out my thoughts on five covers from Wednesday, November 28th. 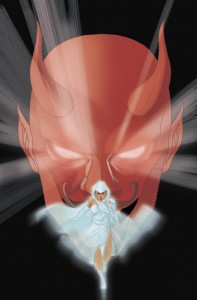 There is no denying how Phil Noto’s artwork is mesmerizing. From Batgirl to X-23 he doesn’t create just covers, he creates works of art. There is no denying that I would not have even read as much of Buffy the Vampire Slayer Season 9 if it wasn’t for his covers.

I also cannot deny that it was his elegant take on Ghost, and a Dark Horse Comics template, that got me into pumpkin carving. No seriously, you can take a look for yourself right here.

This issue is no exception. While you cannot tell if she is about to take hell straight on or run from it, if you’ve been reading the book you know what is ahead, either way.

Even the tiny details of the mask in her hand with the clean and smooth contrast of red, white and black create a vivid look at what’s inside. 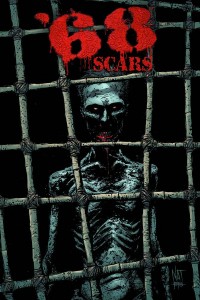 I know what you’re doing right now. I don’t care how macho or brave you think you are, you’ve only looked at the ’68 Scars digital cover from the corner of your eye. Are you even man enough to click on the picture and blow it up in size?

Well, don’t worry, I did it for you. I then closed it and threw up a little in my mouth.

That’s what Nat Jones is known for: taking horrific things that could only be imagined and making them come to life.

Oh, sure you could go on about the zombie metaphor for the horrors of the Vietnam war (where the comic takes place.) Next thing you’re going to tell me is there is some sort of layered meaning to Slaughterhouse Five. That cover shambled out of the zombie nightmares I had as a young newlywed and crawled straight onto that cover. I’m not exactly sure what metaphor that dream was conveying, either.

Either way it is gorgeous for a rotting, animated carcass. 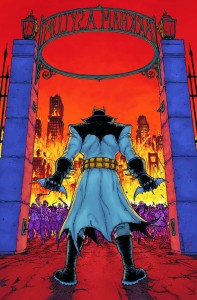 Gotham’s on fire, the citizens are crazy, and everyone worth protecting is in Arkham Asylum. In one single cover Chris Burnham has summarized their entire solicit for Batman Incorporated #5.

Even if it does take place in the future, and even if that is Damian and not Bruce, the dramatic sunset effect works on several levels.  It talks about the downfall of the city the Bat family always worked to protect. The color palette is dramatic. It makes you think.

This is one of those covers you just want hanging as a poster in your room. Even if Batman Incorporated did not exist, if I just saw this picture, I would be amazed and confused for all the right reasons. Grant Morrison wouldn’t have to be the writer. The inside at this point doesn’t even matter anymore (but come on, we all know it does). It’s a collector’s cover that you know is going to find a place on your wall somewhere. 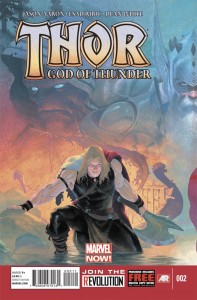 Alright, so at this point there will be camps who are wondering why Thor God of Thunder #2 is on this list. You might see it as a typical cover on some levels: the way Thor is spread out, ready for battle. It might also be a biased from reading this series, but Esad Ribic does a beautiful job.  The future and the past and the threats Thor is facing are all combined on one cover. I expect to look up on a grand temple’s ceiling and seeing Ribic’s Thor there looking down on me.

It’s a form of artwork you think about usually with Christian icons. Instead, you have this Nnorse god whose past has already shaped his future. Despite not knowing how it will all be resolved, you know that somewhere along the road butts will be kicked. 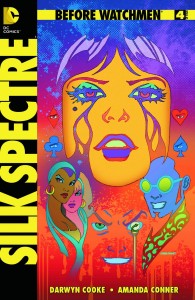 Is there any doubt when Silk Spectre takes place anytime an Amanda Conner cover comes out?

Just like Nat Jones’ art reflects the horrors of war, Conner reflects the fashions, styles and trends of the times being used in her books. Spectre is also the shining light of the Watchmen group. Despite her lack of desire to take on the mantle, in the end she owes up to who she is and her job. Being part of the writing team shows through Conner’s art. It’s brighter, more colorful and stands out from the rest of the Before Watchmen choices.

Conner is not just drawing off of the imagination of another person, but from the story that was also going through her own head as she consulted with Cooke. She also has inspiration from a historical past with the Summer of Love.

Finally, Spectre’s story is one that women might find easier to relate to than men. I have no doubt that is true for the art as well.