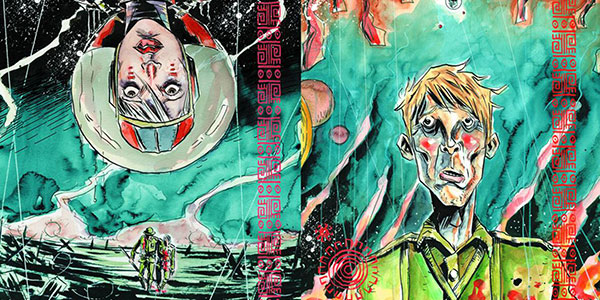 The independent voices and artists are ruling it all this week as the mother of all comics shows you some of the best covers from the week of August 7, 2013 in MOM’S COVER WATCH. 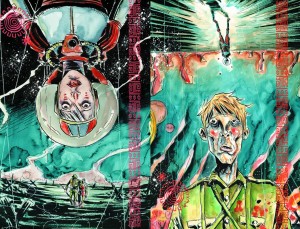 Thank goodness, Jeff Lemire is back. After the end of Sweet Tooth there were only small stories, such as hisLemire’s romp in the pages of Adventures of Superman to tide us over.

His unique style shows the time traveling juxtaposition present in his story. The use of red for blood, accent and symbols stands out against a wash of blues, peaches and greens. Finally the topsy-turvy positioning of the future on the top of both pages and the past on the bottom creates symmetry. 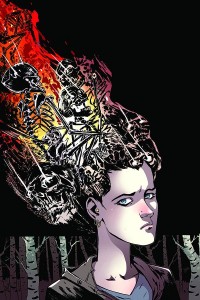 Grays, blacks and whites combine to create a haunting and chilling cover for Sheltered.

Here, following a traditional layout, the eye immediately focuses on the flaming skeletons used to create the hair for a new arrival in the story. Setting the perfect metaphor for what our characters are responsible for, it flows down into a face of a trapped soul. The woods provide an immediate note on the setting, despite the fact that it is actually the compound in which they are trapped and cannot get away from. 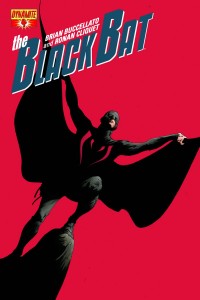 This cover is the reverse diagonal of our previous cover, however, this opposition helps to create a tension filled dynamic.

Jae Lee uses nothing but black, red and a few accents to create a powerful image of the Black Bat and perched and ready to sweep in. Placed against the solid red background, it is a strong comic cover that will stand out on the shelves and leaves plenty of room if you happen to get it signed one day. 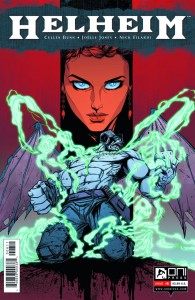 The action is all centered on Bera and Rikard. With Bera bathed in red and the undead like blue power bounds coming over Rikard, the two former lovers are contrasted nicely on this cover.

Bera’s eyes are still shown in the pale blue that covers the bottom part of the cover. It allows her eyes as well as the title to stand out strongly on the top portion. It almost makes a reader hope she can still be redeemed, even if she is too far gone.

Joëlle Jones characterized style with the art, the over emphasized core muscles and graphically pointed wings, make Rikard look more like the peaks of a mountain than the undead warrior he has become. 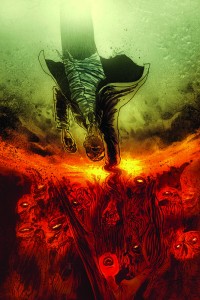 ‘Of all the things in heaven and hell’ Ten Grand seems to walk the line between both locations the most and bring us the most gut wrenching feelings along with it.

This month’s cover is no exception with Fitzgerald once again taking his undeserved but bargained heavenly perch and the woman he loves being shown in the depths of torture. Just as other covers this month, this cover uses light colors and dark blacks and reds to juxtapose the good and evil, the hopeful and the sad. The exception here is that despite having a heavenly position, Fitzgerald will continue to be plagued. That’s because now instead of just dying to visit his love for a few minutes, he’s going into the depths of hell just to see her.

The plagued faces along the bottom half of the cover are haunting, and the type of eyes you expect to see from beneath your bed. Templesmith has left a haunting impression.