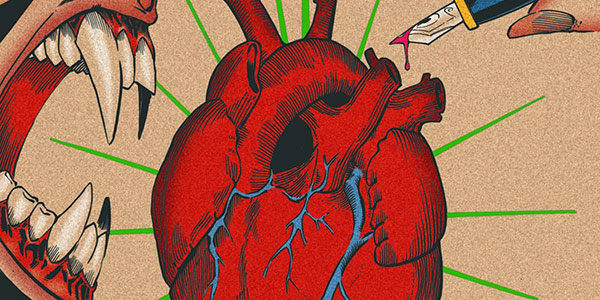 In this week’s Mom’s Cover Watch,  the mother of all comics gives you the five of the best comics covers from the week of December 12th. No shenanigans this time. it’s really just five covers. I promise. Not that I wasn’t tempted (cough*Batgirl*cough*DeathoftheFamily*cough.) 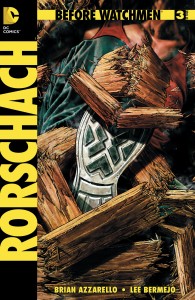 Every time Rorschach was about to have another cover revealed I wondered if they were finally going to get away from the metaphorical representation of his costume and finally have something more direct.

Each time, no dice, and it is amazing!

Bermejo uses a shoe and wood in one of the most creative representations so far.

While cleverness is not always enough to get people reading Before Watchmen, readers with disposable incomes and a weakness for packaging though should be easily drawn in by the motif.

Activity focuses on a covert operations team. Artist Mitch Gerads has done work for some big books at Image such as Irredeemable, Incorruptible and Doctor Who. However, his work over the last year on Activity‘s covers should be seen looked at as an art series or collection.

Each cover has interest, detail and smart color choices.

Let Gerads’ art and Team Omaha, the black ops group, take on you on an adventurous ride.

This cover just makes a person say, “What the heck is going on here?”

A figure in purple stands out against the tan background. The winged figure looks as if it could be calling out to everyone’s subconscious memories of Leonardo Di Vinci’s Vitruvian Man. Except, you know, with wings and glasses and shaggy balding hair.

Oh, this comic takes place in the future, not the past. Not future Europe, future Japan. While assumptions are dangerous, I assume the purple clad figure is one of the everyday residents trying to survive this new Japanese landscape. The four-part mini-series is about soul devouring Hallows and the people living in the tree cities above.

This cover has more of a cleaned up feeling than artist Sam Kieth’s previous work on Zero Girl, but some of the same color choices as The Maxx.

The last place on the cover I really took the time to look at was the lighter purple blob with yellow eyes. When you think of it, it’s almost an evolution of drawn figures getting more and more complex as you look at them stair stepping up… or you could look at it from right to left and the message suddenly changes.

Capullo’s art on Death of the Family has been compelling and heartbreaking. The covers are no exception.

Just as the Joker’s threats of living under Gordon’s mattress could give a reader chills, the Joker curled up in Batman’s mind is equally as unnerving.

With promises of an ultimate plan to be revealed this issue, the cover needed to be iconic. Many of the DotF Bat family covers have lived up to cover wall standard with strong imagery and allusion. This cover is no exception with clean lines and stark contrast on the black and white form of Batman’s head. Then the muted purples and greens along with the detail and attention to Joker provides a great juxtaposition that let’s the eye know exactly where it should land.

It’s an in your face reminder that most of the battle with the Joker is mental, not physical.

Not clear about the plot?

Take a minute to read the cover. You heard me: read all the text on the cover.

Some cover art is great at summarizing or conveying the most important parts of a book. Alright, this premise of this comic sounds like it is preying on the fandoms of popular brands of fictions, such as redeemable serial killers, ala Dexter, and vampires. But, how often do you find simple and well done cover art that actually lays out the plot of the series for you?

The previous covers of this book acted as almost a turn off to me. This on the other hand actually has my interest peaked. I’m not sure if they’re anti-heroes or just antagonistic protagonists. The book will have to be opened and read to find out.

That, ladies and gentlemen is what a comic cover should do: make a person interested enough to try to find out.