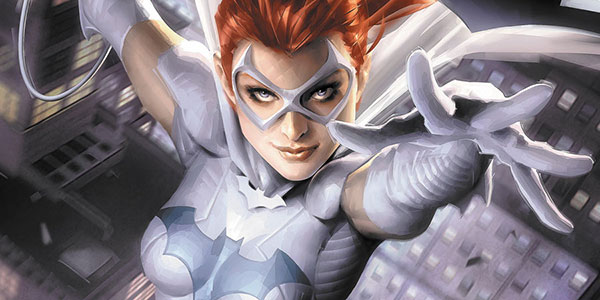 Mom returns for another week of cover goodness, as she hits books across the comic market! 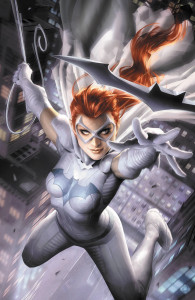 Can you believe that right when this cover was first published for solicits Alex Garner was lamenting on his art blog about what a horrible rush job he had done?! He used a layout from a previous piece of work he had completed but replaced it with new components and said on his deviantart page , “My only gripe is that I wish I had the time to set this piece aside for a few days so I could see the mistakes with fresh eyes, because right now my eyes are very fresh and I see a few things I would definitely like to change. No time this time unfortunately.”

In this case I’m thankful he did not have time to touch it. What has come about is one of his most beautiful pieces. While not the most flattering pose from Barbara Gordon, her new Bluebelle persona is complete is the gorgeous all white uniform that leaps from the page with her flaming red hair gracing the skies of “Gothtopia.”

The multilayer process that goes into just one of Goni Montes’ covers is staggering.  On the surface it may just look like he took a piece, subdivided and image then filled it in with solid color squares.

However, if you check out Montes’ blog you can look at previous Next Testament covers to see that this isn’t the case for areas that look like they are just a single color.

From pulling and tracing from real-life inspirations to creating new organic features on top of those background pieces Montes’ final rendering of covers is something of wonder. While this piece stands out with it’s cuts of bright red against muted, softer colors, when combined with the whole run, this far, it is a wonder to behold.

The best thing about the Imagine Agents covers are the imagination that goes into each one. There are always tiny details that you can call out or recognize and then cling to as everything else around it seems unreal.

There is no exception this month. It’s the type of series that is daring you to pick it up and not like it, because it knows that if that cover can get you to just crack it open a little you’ll fall into fantasy with the inside, just as you did with the cover. 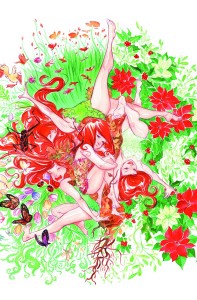 An Ivy for every season.

That is what is presented on this week’s cover of Lil Gotham. This digital first series does a great job of creating metaphorical representations of what the story will be taking place. With this collection focusing on the plant loving villain being stuck in the season of no growth (fall/winter Ivy pictured center) you can see where things are headed if you haven’t been reading online. Nguyen’s art is one of those things best appreciated in high resolution or print. So unless you have a retina display, I suggest you pick up this issue at the store.

Cool, creepy and wicked lines have Matteo Scalera rocking the covers of Image books lately. Ghosted is another one of those covers that combines great contrast between cool blues and warm browns and reds.

From the expression on our leading man’s face to the dead creatures threatening to attack in the reflection, there is a sense of danger from both points of view. This cool under pressure persona is part of what makes this series intriguing all around. As our own Aaron Meyers says, “The past meets the preset when this crime drama takes on the most thrilling supernatural heist of all time!”