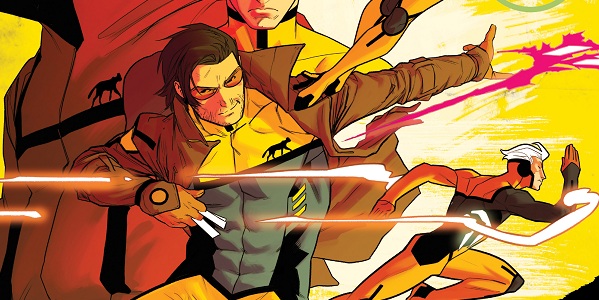 There was a behemoth amount of comics out the week of January 8, 2014. Here’s a look at just a small taste of some of the most dramatic covers for the week.

Yellow is the new white. At least that’s how it feels with the clean look for the launch of this Marvel NOW! book.

Beautiful. Deadly. With one foot in Eastern Europe and the other in New York. Noto does a great job of incorporating tiny details that define Black Widow and yet keeping the cover from becoming overworked.

A simple target in the eye, and high contrast eye grabber of white and red with city silhouettes against that gorgeous face create a beautiful cover for what is being set up as a beautifully rendered and adventurous first arc.

This is a series that has made a statement from the stands with solid bright colors and intriguing, if not pulse-pounding-inducing silhouettes.

Now, the tables have turned with a cover of black, white and just a smug of grey. Oh, and two tiny words hidden beneath the issue number, “Sex Police.” Words, colors and graphics combine to create a game changer to plot of this unique series that’s looking to take it a step further. 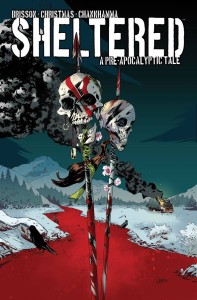 With so many books coming out this week there were many issues fighting it out for creepy and unnerving. However, John Christmas’ Sheltered has color drama with a river of blood and macabre display.

The threat of death and violence “before” the apocalypse is a frightening idea, since it’s technically not yet the end. This is one of those series that has a new angle on the end of time that you need to be reading. If the rave reviews from people across social media haven’t convinced you, this cover should. 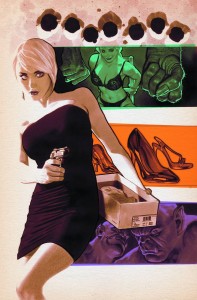 This cover combines a classic Adam Hughes beauty, this time Cinderella, with three flashes of color blocked images as well as a line of bullet holes.

By keeping the tan and flesh tones around the borders you would think our leading lady’s face would be washed out. However, with her hair right against the green, orange and purple that pop as well as the dark dress, her look of danger is prominent and well formed. It gives a taste of noir to this latest arc.