It’s New Comic Book Day and that means there are a host of new, glorious covers on store shelves! Check out the best of the best, as chosen by the Mom who reads comics, Jessica Boyd:

The trend of pastels in comics covers is normally psychedelic or surreal. Here the purple and pinks take a supernatural turn that would be pleasant to see more often. Our protagonist glows with this other worldly color choice. Faces are set into the background and not in the normal justice seeking mob, but below in the wall.

The masthead is just below where the eye would initially fall giving yourself a second to take it all in before focusing on the title. It’s a great combination that creates a powerful view.

Dynamic colors, intriguing faces and explosive backgrounds have nothing to do with building the fan-base David Lapham has for Stray Bullets. For that it’s the mind bending story found inside. However, the juxtaposition between color and neutrals, the insets of character to surroundings and the unique masthead do not hurt the cause. They are the kind of covers that can honestly sell the style of art found in the pages within.

Whether it’s a tongue-in-cheek tribute to Saga’s Prince Robot or commentary on the life of the Barton Boys, the striking and rather amusing cover to this month’s Hawkeye is striking. With much of the feel of the first round of covers by Aja, with the single color choice to stand out against the grey scale images. This cover takes more of the photo realistic take that causes it to standout even more. 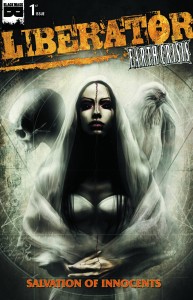 Menton3 rules the horror cover scene. Various dark and unseemly tales have turn to this artist to set the mood for the pages inside. Here the art, normally used for the supernatural is turned to the horrors of animal testing and reflect the stories presented within the Liberator series. A white, illuminated background glows from behind casting a shadow. The main figure is stitched together after being torn in half. Plenty of metaphors could be made between the cover and the story found within. Instead, just sit back and enjoy the haunting visage presented. 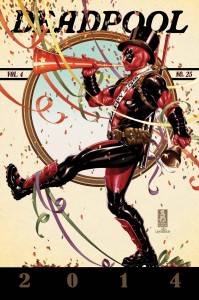 I think this Norman Rockwell tribute speaks for itself.