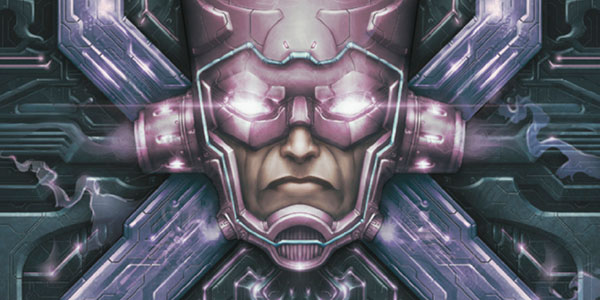 A dash of pulp and a splash of style, along with saying goodbye to book with tongue-in-cheek-and-flare, all create the list of the best covers for the week of November 27, 2013 on MOM’S COVER WATCH. 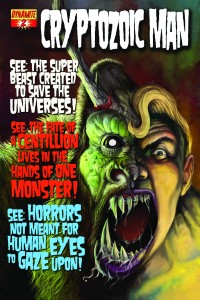 No matter what you think of this loquacious and knotty storyline, Walt Flanagan’s art is from another time period and made of nightmarish dreams you love and go back to sleep to see how they end. This month’s cover is no exception. The half-man/half-beast and incomplete metamorphosis feels like it’s appeared from the cover of a magazine your mother would have forbidden you to read, because it would mess with your head.

The striking yellow hue across the page, the transition of teeth from ghastly to tame, and the curl of hair to transition into the horn and fur laden ears all create seamless transitions.  The positioning of the character is well thought-out for a text filled cover that calls back to serial novels long gone. 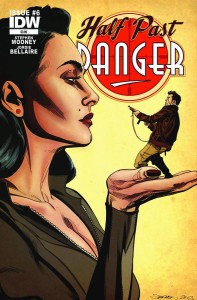 This is a series where pulp style and dramatic flare have taken center stage with each issue. This last piece of the puzzle keeps up this feel.  A beautiful dame, a man with a gun and a juxtaposition of power that makes anyone wonder how things will turn out in the end are forefront.

While perhaps lacking in skin and more than just a hint of cleavage, the imagery on this concluding issue is striking. 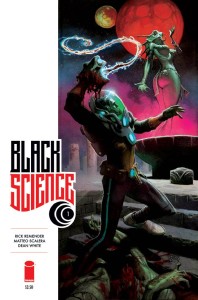 The pulp feel continues with a space-filled twist. The entire book is covered in reds, purples and blues that create a sensory overload of beautiful yet weird surroundings. This cover is no exception with an unknown creature, a space-man with extraordinary weaponry and a background that you could spend hours pouring over.

Violence is hinted at with the bodies and blood in the lower portion of the image. The spine and masthead along the side give the comic the feeling of a pulp novel that you’ve dug-up from a used book store’s $1 bin. The adventure awaiting on the inside is screaming for you to tear open the cover and see what is going on beneath it. 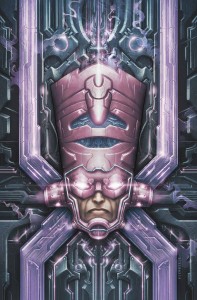 A plugged-in Galactus is a dangerous Galactus.

The world-eater has a new source of power and a new way to be controlled. The metaphorical representation on this cover does a great job of creating balance in the details as well as a visually stimulating  presence. 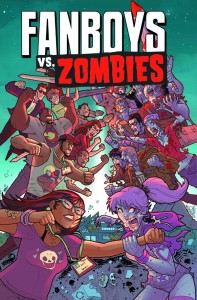 The fanboys have become the zombies in the final issue of the tongue-in-cheek series that does not save anyone from their sarcastic humor.

Not only does this cover call back to the original issue, include the original cast of characters, all as zombies, but includes the creators and BOOM! Studios talent that has worked so hard on this book to bring it to the epic conclusion.

Have fun spotting the talent from Identity Comics who worked on the art, the writers and editors who are ready to throw down — not to mention the divide down the middle of the page that allows you to enjoy the balance being made.