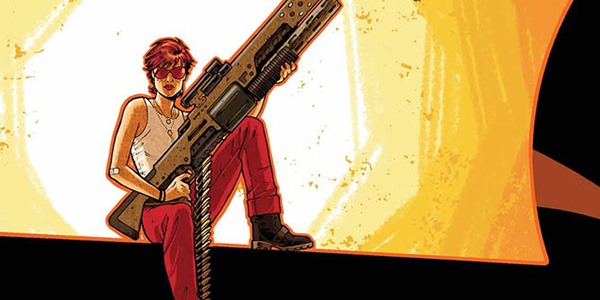 The temperature might be getting colder outside, but the palette for comics’ covers is heating up. The mother of all comics takes a look at some of the more intriguing and inspiring covers featuring reds and oranges for the week of November 6, 2013.

The devil may come in a blue dress, but temptation and mystery abound in red on the cover of Fatale. Sean Phillip’s style highlighted by select colors creates a feeling of grandeur. By red-washing the band in the back and having the character almost colorless, or highlighted just in greys, she stands out, even from the title.

By allowing some oranges and reds to dab their way across her gown, the blending keeps her from feeling like she’s been cut and paste into place and instead is just a natural fixture of the piece and absolutely lovely. 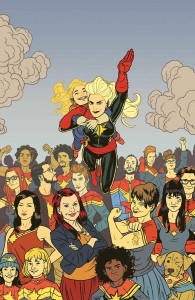 The primary colors are a signature piece for Carol Danvers, now. So to have a cover with variations on her classic look creates cohesion. What takes this cover a step further is that these are real people or tributes to other characters throughout the page. Joe Quinones has not only worked himself onto the cover, but author Kelly Sue DeConnick, various Marvel team members who have worked on the book… even Pizza Dog from Hawkeye has found his won little corner.

This cover can quickly turn into a game of spot whomever. It makes it not only a fun beginning for the book, but a fitting end to this first volume of Captain Marvel before her new adventures begin this spring. 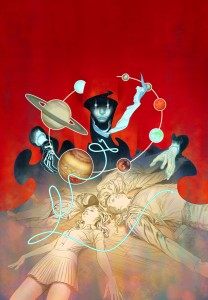 Talk about a juxtaposition of color!

This cover of the Occultist has a sea of red transitioning into sepia tones by making it look like the edges of a cloak for an ominous supernatural figure. The planetary circle draws your eye in to the very center of the page. The simple color at the the top also creates plenty of room for the masthead while making a metaphorical change between the supernatural world and the “real world.”  The palette for the planets is also muted, keeping it from blending in or competing with the cloak. This dark cover and introduction to the mini-series continues to make it tempting to dive in, if you haven’t given it a try. 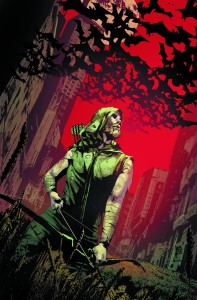 Red and green might be Christmas colors, however here they’re just classic complementary colors creating a dynamic image of a bearded Green Arrow.

Let’s be honest, the beard and brush built up in a derelict city makes you curious  to the origins of Oliver Queen. While the zero issue explored some beginnings in the DCU, this cover promises more for Queen, since it’s clear he’s already gained some skills. The cloud of black bats also creates a reminder of just why this issue is taking place as well. 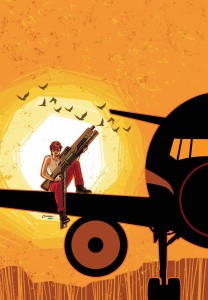 From seas of red to the orange of the hot, hot son. Here Amanda Conner and Dave Johnson have used the background to highlight our protagonist and the… equipment?… of her trade. Pain Killer Jane has had some phenomenal covers featuring just her. This new approach is one that creates a look of simplicity, yet  you know required a lot of thought a detail, from the lines found along the edge of the son and the fence, to the decision to back-light the airplane yet keep Jane fully highlighted and visible. Plus, any graphic designer can appreciate the ample room left for the masthead at the top, so as not to cover  up the gorgeous artwork!