A pop of color and pizazz take the top spots for the mother of all comics this week who takes a look at the best covers for October 2, 2013 on MOM’S COVER WATCH. 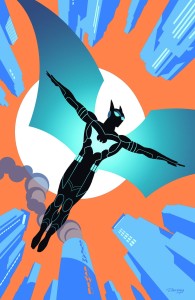 It’s not often that you get a Bat-family book with this much color that speaks so much in volumes about the tone of the writing found inside the book, itself.

Batwing has a snarky streak that has not been found for a while in the Bat-family, at least since Drake wore the Robin mask. Now that feeling is reflected in the bright cover art as well, from Cooke. This modern poster-image take on the newest addition to the family creates great contrast with blues and oranges. From the golden sun-drenched sky to the blue of the buildings and wings, you feel at any moment that Batwing could have his own opening on a cartoon show, as well as in the action and emotion-filled pages of his title book. 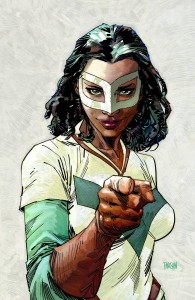 DC Comics wants you to be part of The Movement.

It’s flat out a call-back to the Uncle Sam poster from World War II. Panosian pulls it off well with the texture of the colors, to the expression of our heroine’s face. The reference is undeniable and beautifully rendered. Combined with an unencumbered background, I think Norman Rockwell himself would have found virtue in this image. 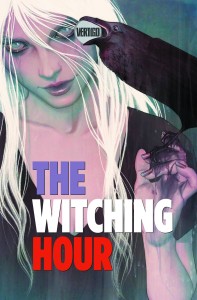 Negative space. This image uses it in the best means possible with a main of white hair cascading down and hollow eyes piercing back at her raven.

For those who do not know, negative space is using the blank white (normally found in the background of paper) and adding color around it to create the image. Comic covers that use negative space usually use it as a background, causing a narrow focus on characters. However, on this cover, most of the space is filled in with the witch image and the normally uncolored area is used for her hair. It creates a stark and chilling contrast perfect for this anthology. 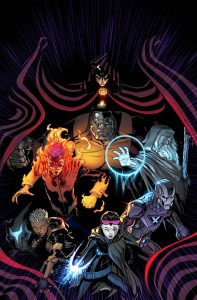 Just what are the blast-from-the-past X-Men up to?

That is the question raised by this cover laid out cleverly by McGuinness. Around the edges are the outline of the character Cloak swallowing other characters that have not been playing a dominant role in the book. However, as we’ve seen in this title, nothing is as it seems, with our traditional time traveling team taking on the roles of others… which also explains the lack of bright, light-bringing Dagger to the darkness that Cloak shrouds around everyone creating such a dark background. 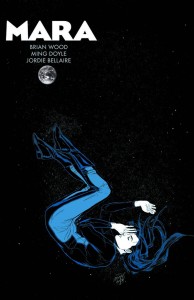 Blackness also permeates this cover from Ming Doyle in the final installment of Wood’s miniseries. Unlike comic covers that promise one thing, or act as a metaphor; this cover speaks very truthfully of the setting for the majority of this issues.

It also creates a great Z-layout with Mara’s body that is almost moving into a fetal position while floating out in space. This conveys the emotional weight of this final issue while not misguiding the reader upon where Mara spends her time in this issue. Using a simple three color palette also speaks to Doyle’s skill in using contrast to convey detail.