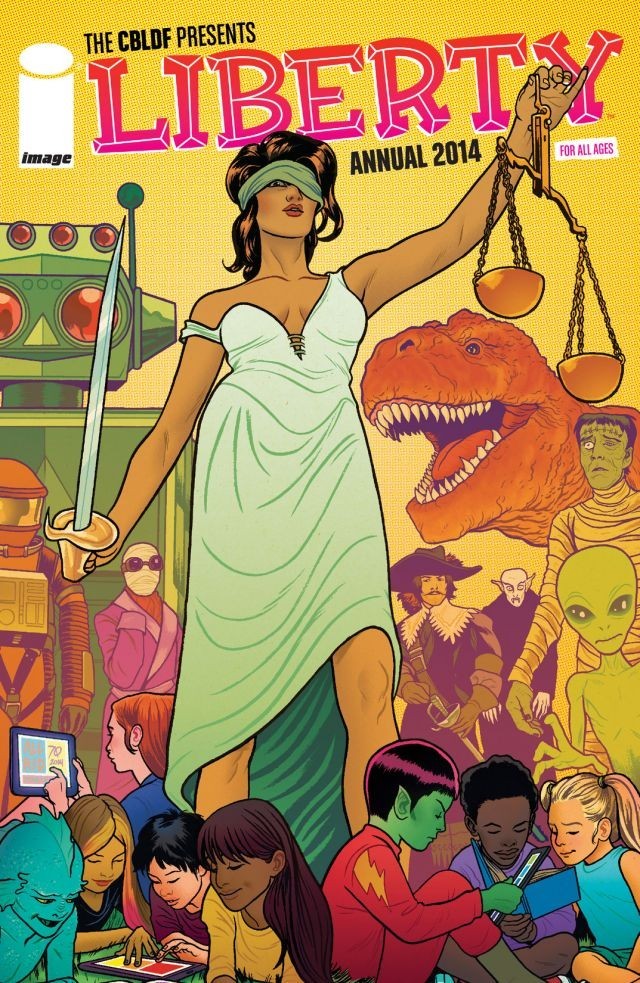 The mother of all comics made a trip to the local comic shop to see just which covers leaped off the stands and into her imagination. It’s MOM’S COVER WATCH for the week of October 8, 2014.

I believe that Panosian has stolen everyone’s thunder and literally put it into a jar this week.

Above all other covers this one was the first that causes itself to stand out and leap off the comic stands this week. Perhaps it is the watercolor like textured beige background allowing the red jar to stand out, causing this cover to catch eyes. Or, it could be you have the figure of a man who should not fit in such a jar perfectly spaced inside. Along with all of this there are layers of reflection, bubbles and rough looking lines that all combine and work with the shading to create a fascinating view.

It’s a darker toned cover than many might be used to from Nguyen. However, the dramatic emphasis is stunning. The absence of color, in place of smoke and ruin helps to create a flowing movement diagonally across the page. They pyramid layout created by the centered head of Thanos sweeps downward to the city ruins and his son on his knees underneath. There is also a hard line of transition between the orange, red and yellow to the purple, blue and white that allows the space to blend into the background on the left. This mixture of palettes is only complimented by the golden masthead.

A colorful character gets a colorful presentation on this graphically stellar series. These covers always have a surface look of minimalism. However, it’s only when taking a minute to understand why it’s grabbing your attention from the stands that you realize all the various gradients and shading involved. How the solid colors play off the seemingly (though not really) while backgrounds. Such a subtle and delicate touch is breathtaking from an artist who makes it a point to make sure his persona is anything but that.

How much fun can a cover have?

Allred is going to make sure that it’s crammed full. This all-ages friendly read not only features the beauty of sneaking-a-peek blind justice, but all sorts of shenanigans. Children, both human and non-human, enjoying reading through electronics, monsters, literary characters, historical figures and robots all take the stage to present a fantastical take. Plus, that yellow texture over everything provides a cohesive tone, while allowing the readers to stand out at the bottom.

I’ll be the first to admit that I’m a sucker for Cloak & Dagger. However, nothing prepared me for walking into the my local comic shop and having this cover jump off the stands and smack me in the face. They glowing contrast between the uniforms of these two characters just bursts forth. The modern redesign, found in the Ultimates line sings in under the work of Nakayama.