This week the mother of all comics, Jessica Boyd, hunts down the best covers that speak to the child in us all or help to bring up those old childhood memories while still creating comic magic in MOM’S COVER WATCH. 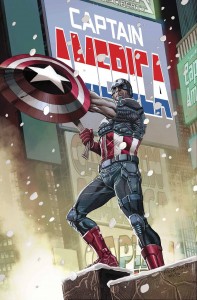 The same week that this cover comes out for the Cap’s book, it is also available as a poster, with good reason. Pacheco has a classic posted Captain posed against the buildings of New York, snow drifting around. Despite the Marvel NOW! stylized and textured uniform, the serious tone of face and the red, white and blue being carried through on the title billboards help to make the piece more cohesive and hold together. Such a busy background might be distracting, but the repetition of the title instead of traditional advertisements helps to convey the feeling that Earth is where the Captain is needed now. It speaks to the hero each of us at one point thought we wanted to be growing up: an icon people look up to. 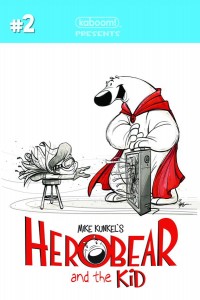 HEROBEAR & THE KID INHERITANCE #2 (OF 5)
Written by and Art by Mike Kunkel
Published by BOOM! Studios

Who hasn’t wanted to do this as a kid? That’s what I thought… cuteness wrapped in more cuteness with the black and white grabbing your attention and holding it forever. 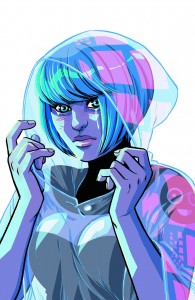 There hasn’t been much deviation each month with the Killjoy covers, each featuring one of the main characters in an almost Lifetouch photographic picture (if they didn’t have a chance to clean up first). While this month is no exception, it’s the android taking front and center with a heartbreaking look on her face and the color and styling that only Cloonan and Jackson could give her. The blue hair, select shading of the city lights reflecting off her jacket, despite the negative background, creates a haunting view. Her heartbreak over wanting to push boundaries and live as she chooses speaks to one many of us felt moving from childhood to adulthood and beyond. 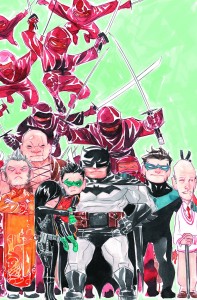 You gather round the camera, everyone is uncomfortable and not looking at the same time. You cannot get everyone to pose or smile at the same time… family portraits are a pain. Now, be the Bat-family and get ready for the camera to flash.

The humor and fun combined in this cover as everyone gets read for the picture, ninjas in the background, Nightwing flashing the bunny ears… it speaks to memories you’ve had with your family, friends or coworkers.