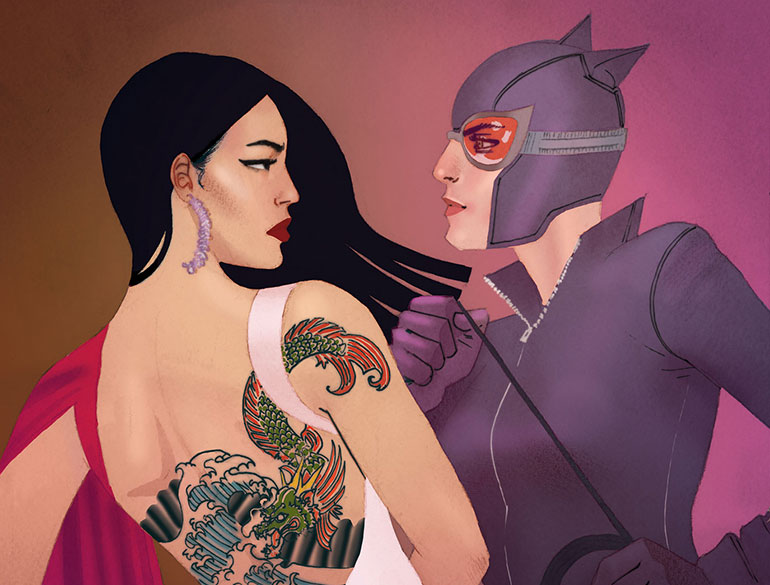 If there is any book, in the history of comics, that went from zero to hero faster than Catwoman #35 last October, I don’t know what it is. Plagued by promotion that positioned the character as “sexy” five times in a single interview answer, artists who couldn’t keep her suit zipped up or portray her with a workable spine, and writers that just couldn’t decide what origin or motivation to ascribe, Selina Kyle was easily the train wreck of the New 52 from the start. And that didn’t change with any of the creative shifts, guest appearances, or Bat-conjugal visits.

Until Genevieve Valentine walked in.

Fresh off of no comic book ever, the novelist Genevieve Valentine immediately revolutionized what it meant to be Selina Kyle — and a woman of power — in the modern DC Universe. First joined by artists Gary Brown and Lee Loughridge, and later artist David Messina, Valentine drafted a story as epic as The Godfather in scope, and just as compelling, blending the mafia crime genre with super-villain opponents, inter-family desire, and literary wisdom from women across the ages. It is not hyperbole to say it covered territory that had only been grazed by Ed Brubaker and his collaborators on Catwoman, and that no other creative team has done in a mainstream super-hero comic universe to date. And something I daresay we may not see again for a very long time. 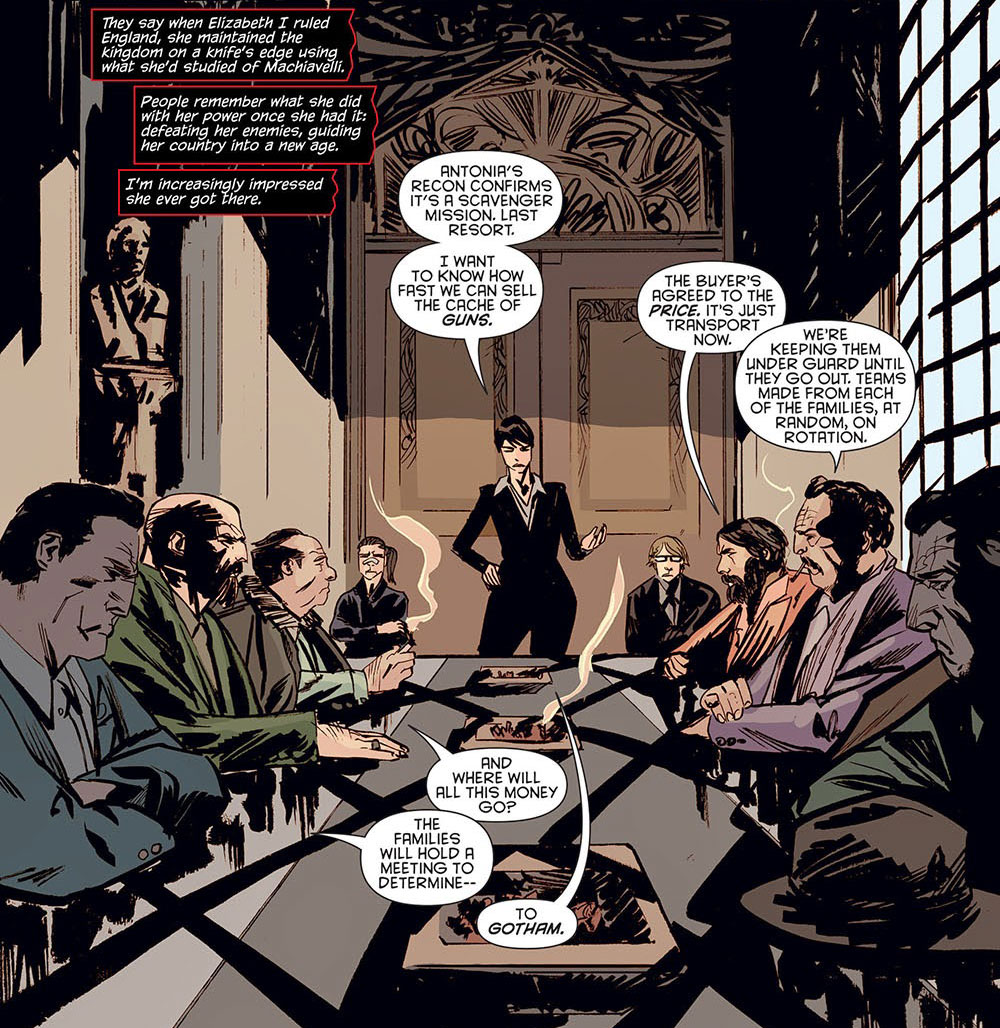 Having recently discovered her true parentage in the pages of Batman Eternal — a father in Gotham City crime family boss, Rex Calabrese — Selina Kyle had a golden opportunity in front of her. Save the city by ruling the city. And it was nowhere near that easy a feat. What followed in her ongoing series was an intricate chess game of loyalties and behavioral prediction that would make any tactician grimace in its complexity. It would all fall into place — if everything worked out exactly as it should.

The last year under Valentine’s pen — six months with Selina escalating and putting her plan into place, followed by six months of de-escalation and extraction — has been nerve-wracking and lyrical in its storytelling prowess. This woman of power standing at the head of a table of mob men, half (at least) wanting her dead, navigating her way through a city that is on the brink of collapse on its best day. It was stunning to think this was the same woman rolling around on rooftops, giggling over her latest score. The sheer majestry that radiated off of Selina as she commanded the respect of her father’s peers — and did so with intelligence and cunning normally reserved for figuring out how to break into museum exhibits — was a sight to behold.

Admittedly, it’s not as if this was the only time the Catwoman commanded respect or stood up for the good of Gotham. But it was the first and only time Selina Kyle had. And that is something else entirely. 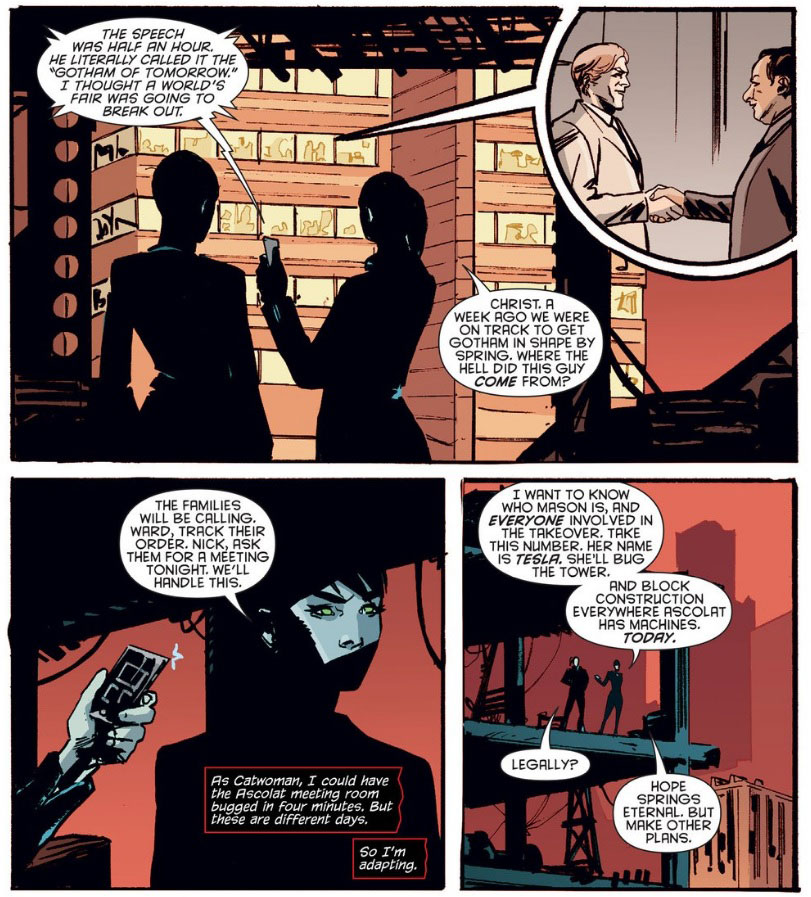 No longer a woman in a catsuit and a mask, Selina became the focus of the narrative under Valentine’s pen, and early on, Garry Brown’s pencil. A woman who achieved her goals through compromise and political navigation, not at the end of her whip. Who stood in front of men and women in a von Furstenberg number, not something procured at a shop with neon Xs brandishing its barred, dark windows. For a year, Selina Kyle was the most powerful woman in the DC Universe.

And now it’s over.

It’s always sad when a beloved run ends, particularly one that sold better than the one before and seems to have deliberately been shifted back to the status quo fast enough to give readers like myself whiplash. That said, what Valentine accomplished in last week’s Catwoman #46 is to give those who loved her story an emotional arc that felt complete and real. A character who had grown through her experience and would never — could never — be the same again. At least, not for me.

And it wasn’t just the exercise of power through intellectual means, and what it meant for Selina Kyle’s character development, that moved me so. Valentine and DC Comics also gave longtime Catwoman fans the explicit confirmation we’d been longing for. Selina Kyle is a bisexual woman. And that is no small thing. Catwoman is one of DC Comics’ top ten most famous properties and has international recognition and fans across media and generations. She has 75 years of history behind her, and that and more to come as well.

That is powerful. It’s deeply powerful to be able to say that out loud. To have her writer and publisher say that out loud. It takes her sexual orientation, long whispers in fan fictions and innuendo, and brings it out of the closet and into the light. It opens up story possibilities in a way that seemed impossible a scant ten years ago. And it gives bisexual men and women the world over someone to point to and say, I recognize some part of myself — this often ignored and spit upon part of myself — in one of the most famous fictional women in the world.

Valentine didn’t stop with a simple declaration, of course, imbuing the story of Selina Kyle and her ill-fated love Eiko, a rival crime princess of Gotham City, with a queered Romeo and Juliet style story of impossible attraction. From the moment they kissed, it could not be. And everything, from Black Mask’s attack on Eiko (mistaking her for the original Catwoman) to the murders of half of Gotham’s mafiosa, was there to tear them apart. Even in the quietest of moments, in the aftermath of Eiko’s injury, there was a palpable space drawn by David Messina between them — an invisible wall that was nonetheless impenetrable and called Selina toward Eiko. It was painful and beautiful and agonizing simultaneously, as all tragic fiction should aspire.

The world Valentine crafted for Selina Kyle — narrated by some of the most notable, yet tragic women leaders of history — was one that certainly was never meant to last, on a meta or strictly fictional level. It seems the fate of powerful women in scripted history, particularly that of the sequential, serialized form, to be cut short, revised, retrofitted back to the status quo. 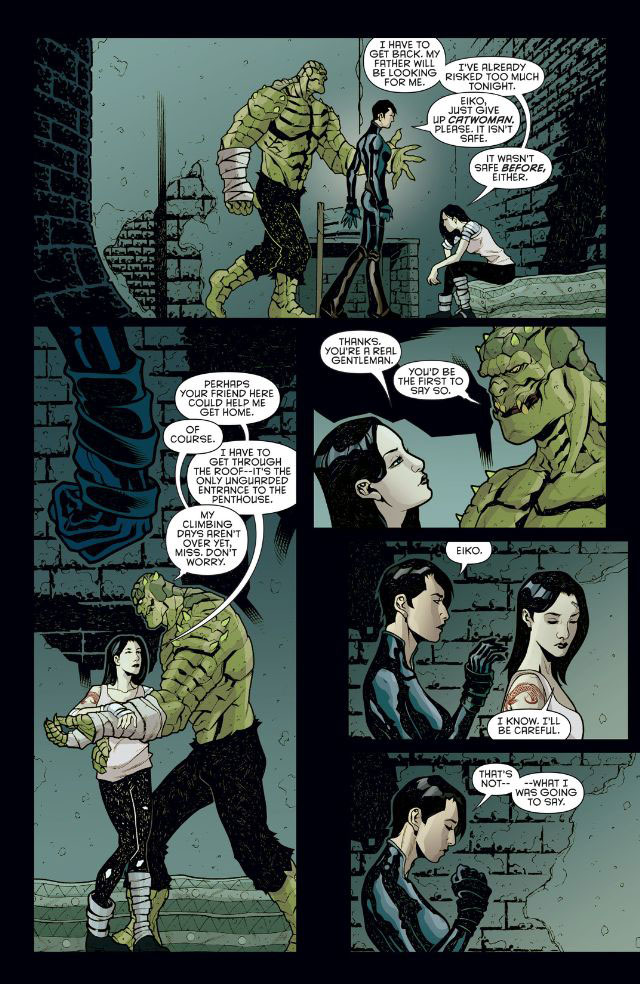 There is a deep sadness to that reality for Selina, even in my joy at every month and page of the story that has been told this past year. It’s a reality I tell myself often. I have told it to others even more often. Your books cannot, will not, disappear off the shelf if a story is told that renders them mute or otherwise inconsequential. There is still consequence for you and there always will be.

Still. When something is so right. So powerful. So dramatically revolutionary a telling. You want it to go on forever. A year is so long and so short at the same time.

I don’t know where Selina Kyle will go next. We already have a sense of where Catwoman is headed, but not Selina Kyle. She may be lost to history for awhile, or ever, as the case may be. But we have her letters. We have these pages. That’s what Genevieve Valentine gave us. A legacy. And someday, rest assured, it will be the narration or inspiration for another young woman’s story. May it be soon.

Genevieve Valentine continues to script the women of Gotham City weekly on and off in Batman and Robin Eternal. Read our review of #7 here.