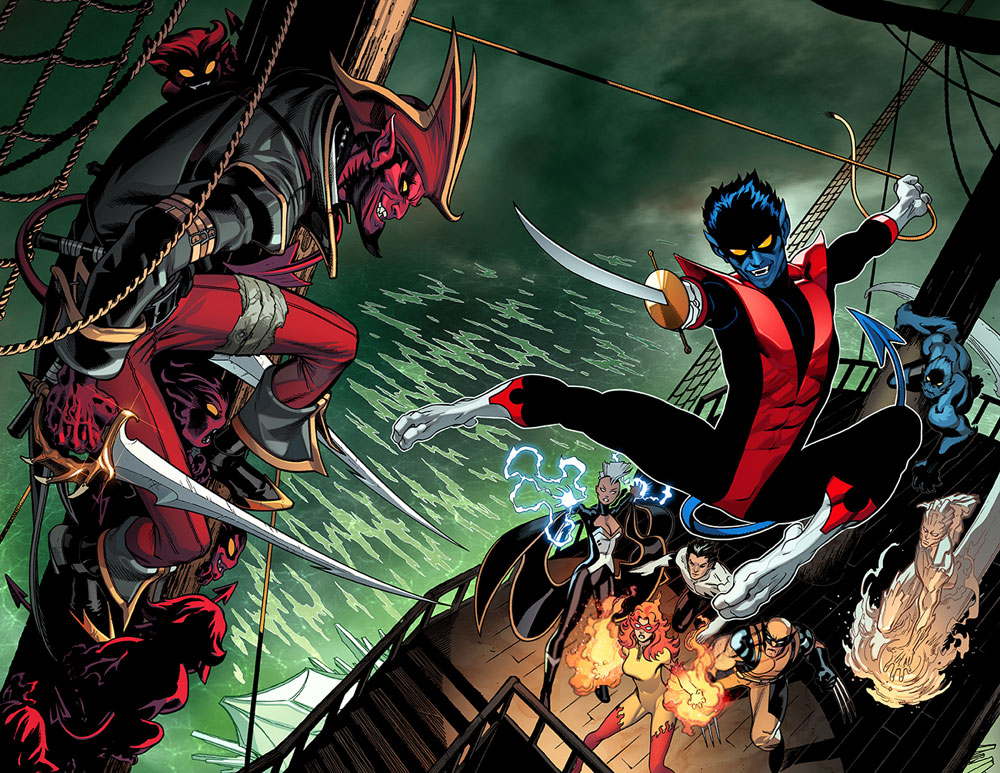 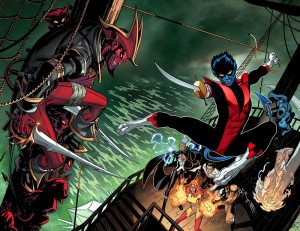 This November, Jason Aaron and Ed McGuinness assemble an elite team to recover the heart of the X-Men from beyond the veil in an all-new ongoing series.

In the wake of X-Men: Battle of the Atom, Wolverine smells brimstone on the air and heeds the anguished plea of a long lost friend. Nightcrawler cries out from the afterlife, and only the AMAZING X-MEN can answer.

In life, Nightcrawler exploited his ability to disappear and reappear within the same sulfur-shrouded instant. For his comrades in the X-Men, the merry teleporter, their swashbuckling elf, never more remained more than a blink and a “Bamf!” away. Then came Messiah CompleX and a selfless act of sacrifice. Their friend vanished, seemingly for good, to his eternal reward.

Though, as the surrogate children of Charles Xavier well know, no good deed goes unpunished. Trapped in a demonic dimension, the pious Nightcrawler prays for salvation, directing his call to Wolverine, no stranger to hellfire himself.

“This is the story my X-Men run has been building to since WOLVERINE AND THE X-MEN #1,” explains Aaron. “This story will explain what those little blue Bamfs are, why they’re at the school, and what they’re up to.”

Following the breadcrumbs leads Wolverine and his team to a hellish realm dominated by Nighcrawler’s demonic father Azazel, who has become a “dark, evil pirate of the afterlife.”

The series also serves as the X-Men debut of one of Aaron’s childhood favorites.

“I’m the perfect age to be a big ‘Spider-Man and His Amazing Friends’ fan,” he says. “So I’ve always had a fondness for Firestar. I like the idea of giving her her first big shot at being an X-Man. She’s never been an X-Man, never been a part of a big X-Men cast or main book, so this is an opportunity for her to step up and be Amazing.”

After Battle of the Atom, the cast of characters at the Jean Grey School has been shaken up, presenting a vacancy on the teaching staff. On her first day in this new role, Firestar happens into this rescue mission along with Wolverine, Storm, Iceman, Beast, and Northstar.

The bleak journey will be one well worth taking, according to Aaron, because Nightcrawler remains a fan favorite, considered by many the heart and soul of the X-Men:

Though the conflict of Nightcrawler’s spiritual upbringing and his tortured experience in the afterlife features beyond the first arc, Aaron promises that his interests lie more with the free-wheeling interpretation. He contends that emotional weight can be wrought while still recapturing the fun-loving pirate he and other fans so fondly remember.